Remember that alleged World of Warcraft: Shadowlands expansion leak back in July? This one is picking up steam, as MMO Champion posted a screenshot from 4chan from an alleged cinematic of this afterlife-themed pack. The screenshot in question shows a number of ghostly ships coming to dock, with a few previously deceased characters returning as spirits.

According to the source on this, Shadowlands “isn’t all dark and gloomy” but rather colorful and even psychedelic with one area taking place in a pocket universe. 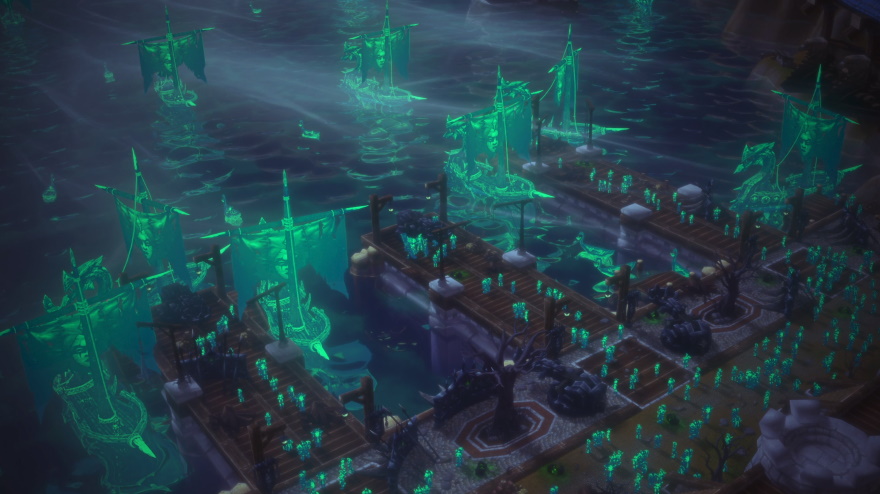 Here’s the supposed leaked storyline leading up to this expansion, if you don’t mind spoilers and possible (likely?) fabrication: Sylvanas is going to attack Thunder Bluff as a feint for her real objective, which is a full-scale invasion of Stormwind. This fight will take place as a 10-boss raid and 40-player battleground in Patch 8.3. Pretty much all major factional leaders will die during this battle — including characters — and everyone will wake up in the Shadowlands. Gnomes are going to come up with a device to let players leave and enter the Shadowlands as they fight for the future of the planet against the Old Gods.

Do you buy it?

If yall enjoy classic so much go play it instead of crapping on everything retail WoW has to offer. Its obnoxious. Personally I think this sounds great and could really shake things up like Pandaria did. Assuming its true.

This could be our next MoP. Sounds really dumb…Just like Mists did. And if that is the case, it might end up being pretty good.

Definitely stupid enough to be true.

Ah well, Classic is there when the nostalgia bug bites. Maybe I’ll soon see my first green item, too.

It’s too stupid to be tru…wait, Warlords of Draenor happened..

“Gnomes are going to come up with a device to let players leave and enter the Shadowlands as they fight for the future of the planet against the Old Gods.”

…and I’ll be responsible for making sure all the apparitions come in a variety of pink hues and colors (or colours). <3

This woman was a Gnome, I knew it all along!

Great inventors but it’s my understanding gnomes have no soul and cast no shadow. No mirror reflection either.

That’s what happens when you turn shadows off in game to improve performance, just saying.

We’re also in your fridge eating all your ice cream! <3

That’s an artistic interpretation of the queues ferrying you away from retail to Classic so you can play in the dust of your dead memories. No judgement I plan on doing this soon my self.

If this is true, it’s a HARD PASS from me.

Guess they need something new/crazy so this wouldn’t be outside the realm of possibility.

I’ve given up on WoW lore, much the same as Blizzard.

I swear you guys spend more time lurking in these articles and forums than actual players do….

Plenty of other games out there. Go play them.