END_OF_DOCUMENT_TOKEN_TO_BE_REPLACED
It’s true: There is so much more lore in Warframe than even players may realize. First, it may seem unexpected for a shooter, so folks don’t even thing to look for it. And second, you do need to look for it. Lore is less known because the it is not as up front and packaged neatly at your fingertips like in most MMOs. You definitely are not spoon-fed the lore in this game. You get the story through the story missions, but there is so much more parsed throughout the game that unless you know how to look for it all, you will likely miss a bunch. So here’s how to look for it all!

If finding lore in the remnants of this world could be summarized in two words, they’d be “scan everything.” If you want more words, I’d have to include reading entries in your orbiter’s terminal (which we’ll cover that in a moment) and listening to the dialogue in missions. First, we’ll focus on scanning.

To compile this lore, grab yourself a bunch of codex scanners and/or synthesis scanners and go scan-happy. Better yet, put the scanner mod on your sentinel bot (and stock up on scanners or nab the unlimited one) and just adventure along. Everything near you will get scanned in.

Now, you won’t get nearly all of what can be scanned by happenstance running missions; you will have to search. Items are often tucked away and hidden. Explore all the crevices in each map. Move around. Be sure you either go in alone or with friends who won’t race to finish the objective so you have time to seek these out!

While you scan things for your codex from the beginning, you’ll get to take daily synthesis tasks after you complete Cephalon Simaris’ quest New Strange. These tasks ask you to hunt down and scan specific targets. Once you reach that point, take note of the terminal over on the left side of his chamber on the Relay: This lets you choose an additional Imprint target type to hunt down and scan. As you scan each of these seven extra targets enough times, a new short story about the fall of the Orokin Empire will unlock. Once you’ve hunted it enough times, you can then read these from the Syndicate’s terminal in the cockpit of your orbiter.

The lore that is probably most accessible and most known to all players is the what is revealed in the snippets of NPC dialogue. We’re talking dialogue that happens during the  missions themselves, boss fights, and even in the background of relays. Each boss tends to be a chatterbox during fights, so listening in while you battle will give you insights to that NPC and even a broader story. Those background conversations when you walk around Cetus and Fortuna also generate a surprising amount of lore and story. (If you want to hear the Fortuna chatter without standing there yourself, YouTuber StallorD compiled a video.)

As mentioned above, you can also get quite a stash of lore by reading the tidbits collected in your Codex terminal on your orbiter or by clicking Profile then Codex in your main menu. (Hint: Be sure to roll your mouse over them to discover secret audio files!). The codex is split into four main areas, but the only real lore tidbits are divvied up in sections of the Universe tab (but do read about the Lunaro game mode in missions!).

Warframes & Archwings: Most of the entries here are focused just on the basic information about each warframe. Want to know their stats and abilities? Here you go. However, four of the warframes have blurbs of history and even short stories about the creation of the warframes and Tenno. Warning: If you have not completed the story missions starting with The Second Dream, there might be spoilers involved. If you have, go click on Ember, Excalibur, Mag Prime, and Rhino Prime for these hidden lore gems.

Factions: This section is where you will find the information you have learned through multiple scans of enemies. As with the ‘frames, again you find gameplay information like resistances and location, but some will offer even more. For instance, be sure to read up on the entries for Kubrow to learn about the origin of these pets, The Stalker to delve into his background, and The Grustrag Three to learn the story of this trio of elite Grineer. Of course, you have to have discovered these first and scanned them enough or you can sneak a peek at the linked wiki pages. Looky that, we’re right back to scanning again! 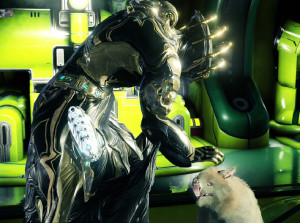 Objects: Tucked away on this tab is the Kuria. Once you have discovered enough about it, it will turn into a 14-verse poem that details the story of the Grineer Queens. How do you discover it? Each individual line (there are four per verse) are unlocked by scanning one of the 56 Kuria statues that are placed in fixed locations of the normal mission tilesets. And by placed, I mean very well hidden! I have personally unlocked only two so far.

Fragments: This is the section where various images and text that you have scanned throughout your missions, including planetary unlocks, are collected. This is also where you want to roll your mouse across images of completed unlocks looking for hidden audio files. As your mouse moves across it, you will hear a static-like crackle then words that gets louder as your mouse gets closer to the point where the audio file will start playing. When you reach it, it will flash and start to play.  (If you don’t succeed at this method recovery, you can also visit the wiki for transcripts and even copies of the audio files themselves).

There are quite a few types of fragments, each with different places of acquisition. We’ll cover each of those in-depth in the next Warframe of Mind.

Catch up with comics

Some of Warframe’s lore is not found within the game itself. Top Cow Productions created a five-issue comic series in 2017-2018. This was later compiled into a single graphic novel. In addition this, there are three web comics that players can access directly on the official Warframe website for free. There are What Remains (about Octavia), The Ascension (the backstory of Grineer boss Vay Hek and the creation of the Grineer Ghouls), and Rell (connected to the Chains of Harrow main story quest). Warning: Rell contains spoilers, so if you haven’t played through The Second Dream and War Within yet, hold off reading the comic.

Unfortunately for any lore hounds, not all lore is permanent in Warframe. Some lore is locked away in limited-time events. One example is the now-ended Operation: Buried Depts. During that event, players could find and scan hidden data hashes across Orb Vallis. Those scans would offer part of a conversation between two of Fortuna’s well-known NPCs: Eudico and Zuud. Players who missed out on the event or didn’t find all of the data to scan won’t have a chance to experience that particular lore (unless someone comes along and compiles it as well!).

A big thanks to Sophiskiai for assistance on lore location collection!

Better yet, put the scanner mod on your sentinel bot (and stock up on scanners or nab the unlimited one) and just adventure along.

Specifically, the Helios sentinel, who comes from the Energy Lab in Clan Dojos. If you start your own solo clan, it might take a week or so to complete all the required research, but the cost and materials are not too prohibitive, and you’ll unlock the Lanka sniper rifle along the way. Or you can join an existing clan that already unlocked the Helios blueprint and replicate it for 15,000 credits.

Alternatively, you can spend 75 Platinum to get Helios from the market or ~50 Platinum to get Helios Prime from other players if you’re MR 8. The latter is the best option if you want to spend Plat (and are MR8), since you’re spending less to get a model with slightly better stats, including on the Deconstructor weapon, which is actually pretty damned powerful even in its non-Primed form.

Helios Prime was my go-to companion until I got my goodboy Sahasa Kubrow. Best Sentinel, better than the highly overrated Carrier.

IIRC, Carrier used to be the only Sentinel that had Vacuum, that’s why it used to be the mandatory pick. It’s been a long time since that was the case, though!

Yeah, there was vacuum originally and then the ammo thing, but honestly, ammo hasn’t been a problem for me at all since the advent of kitguns and Pax Charge. If I could only pick one Arcane, it would be that one.