What a difference a few weeks make.

This past spring when I last toured Legends of Aria for Choose My Adventure, things were a little too heavy-handed with the “hard knocks” part of the school of hard knocks. Now, however, Legends of Aria has had an update, and most of my earlier complaints about the game appear to be completely addressed.

While the lore of “why you’re in the realm you’re” in is still spotty and slapdash at best, at least now there’s some better guidance to how things work mechanically… and this time, it actually applies to more than just some on-screen tutorial prompts. 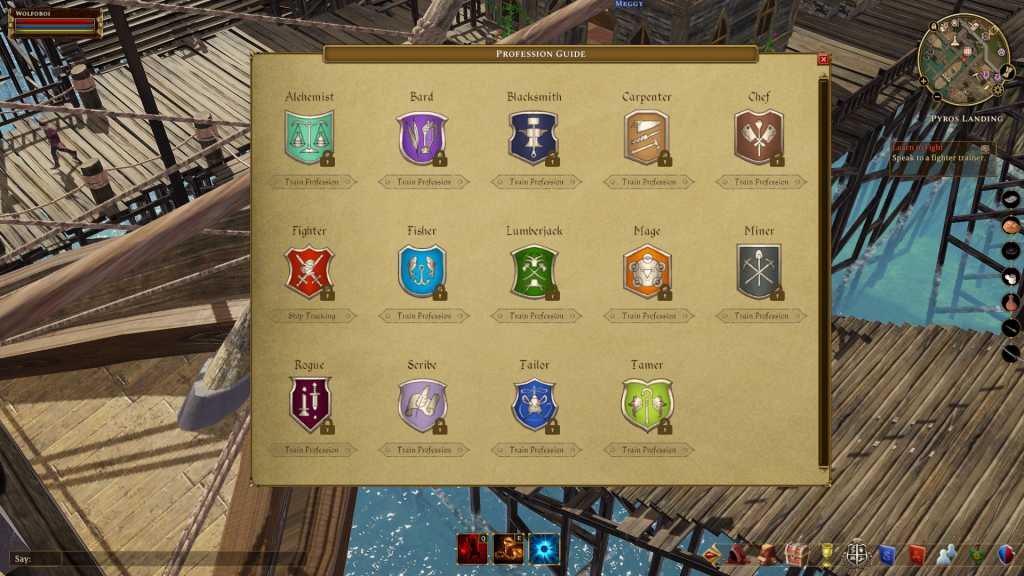 Much of what makes this return to Legends of Aria better is the Professions guide, which offers a gentle hand toward becoming one of several different pre-determined build types and gives you a ladder to follow up in terms of what skills to improve. From here, it was a simple matter of opening my Skill book to track the skills to focus on and then head in to the world to do stuff.

This is such an ingeniously simple and brilliantly elegant piece of guidance that perfectly toes the line between offering a guiding force without turning Legends of Aria in to a themepark MMO. There’s direction here and a goal to achieve, but none of it seems to be on-rails.

That said, when you reach new stages in your chosen profession, you do get some step-by-step quests to guide you through doing things based on your chosen path that will strike familiar to themepark MMO players. For example, since the voting told me to follow through with a combat character, I went ahead and selected the Fighter profession, which led me to a trainer to teach me the basics. Once I got to the next rank, there was another series of quest steps to follow to earn a little reward. 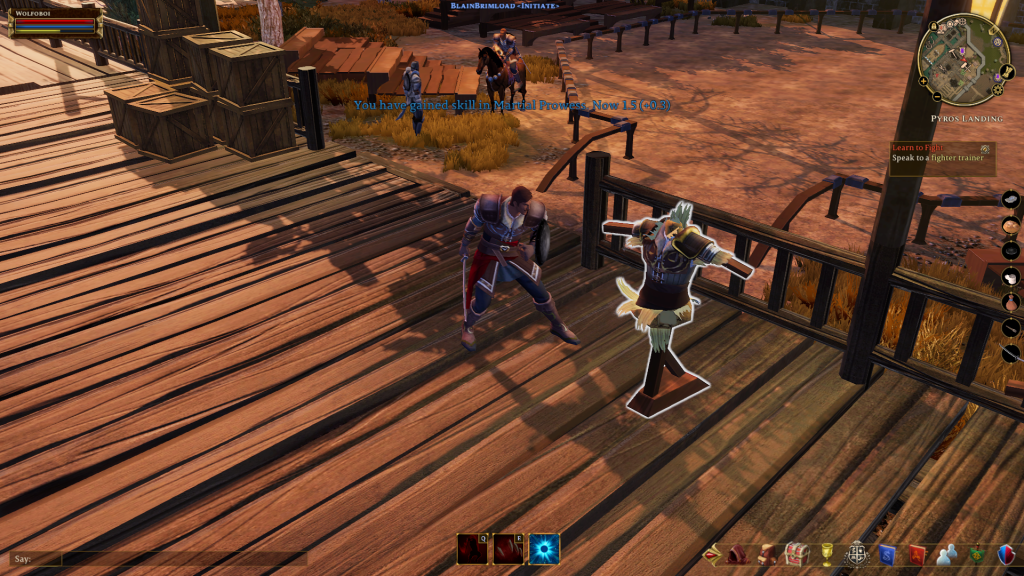 Not only did this give me the right carrot to chase, but it also gave me confidence in what I was capable of. Knowing what sort of enemies I can take on and when I can do things like, say, take on Missions was a huge boon, and it let me hit the ground running to really push the boundaries of the world.

Pushing boundaries and seeing what I’m capable of was one of the biggest hurdles between me and enjoying Legends of Aria, but now that I had a build to follow and a cleaner idea of when I could strike out further, I felt more confident to wander. Taking up my first mission saw me striking out into the wilds without nearly as much fear and self-preservation as I had the first time I was here. For once, I was eager to adventure forth instead of orbit the safe zone.

Naturally, venturing forth is where the more interesting things happened. At one point there was someone who ran by me with five bear pets following them. A new player dragged a high-level goblin over to the city, so that player, a high-level player, and I joined forces momentarily to take the enemy out. On the way back from my mission, I was beset by goblins myself, but that chase was interceded by my old friend the Tighty-Whitey Troll. All of those “emergent gameplay” things that sandbox devs beat the drum over happened, and they only happened because I was given the confidence to step out. 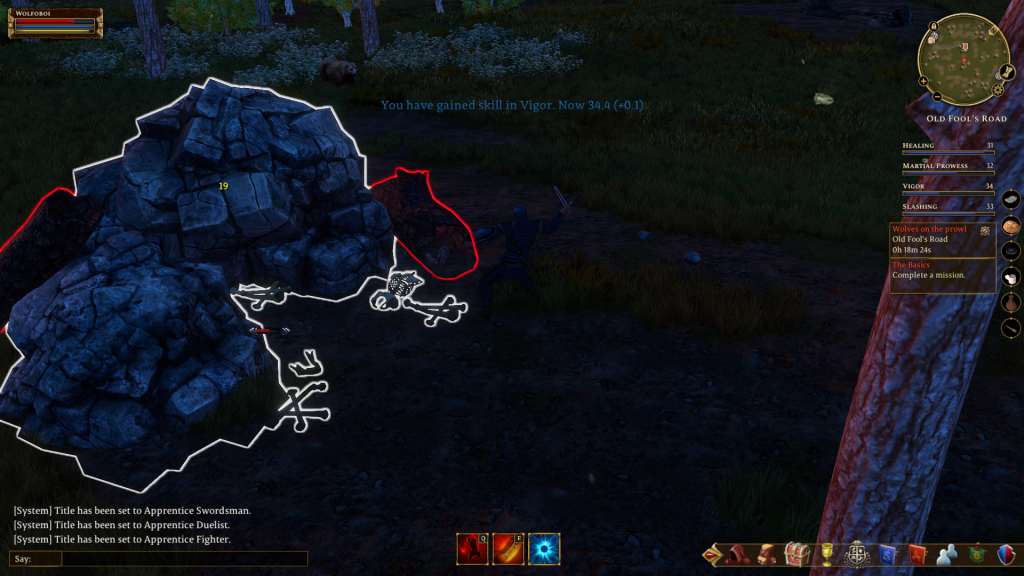 The mission I took up myself, I should mention, wasn’t exactly what I’d call an epic quest. I had to walk out to a distant area to take out wolves, which I had assumed was a simple “kill x” quest. What it turned out being was a job where I had to whale away on a wolf lair construct with my sword until it blew up and the wolves stopped spawning. Not terribly thrilling, but it also was the first time I actually succeeded in completing a mission in this game, which is pretty much a personal best for me.

There are still a few of those old hang-ups that bothered me the first time I was here. The vistas I’m in right now are still kind of boring and don’t exactly entice me to push forth, especially since the camera is always at a helicopter angle that doesn’t let me look out to the horizon. Melee combat is still a bit too automatic for my tastes, with only two buttons to hit once in a while. There’s still no real way to know how strong the monster you’re targeting is until you engage it and get punched in the mouth.

In spite of all this, though, these are things I had come prepared for and was ready to mitigate. If the numbers I create hitting a creature are larger than the numbers they create when they hit me, then I know I’ll win a fight. Auto-combat just means I get to chat with people in Discord. Not seeing much of what lies ahead is no big deal if I have some breadcrumbs to follow or a goal to reach for. These lessons that I carried with me from my first visit combined with the Professions guide to make Legends of Aria a significantly more engrossing experience for me.

For once, I’m ready to actually play. 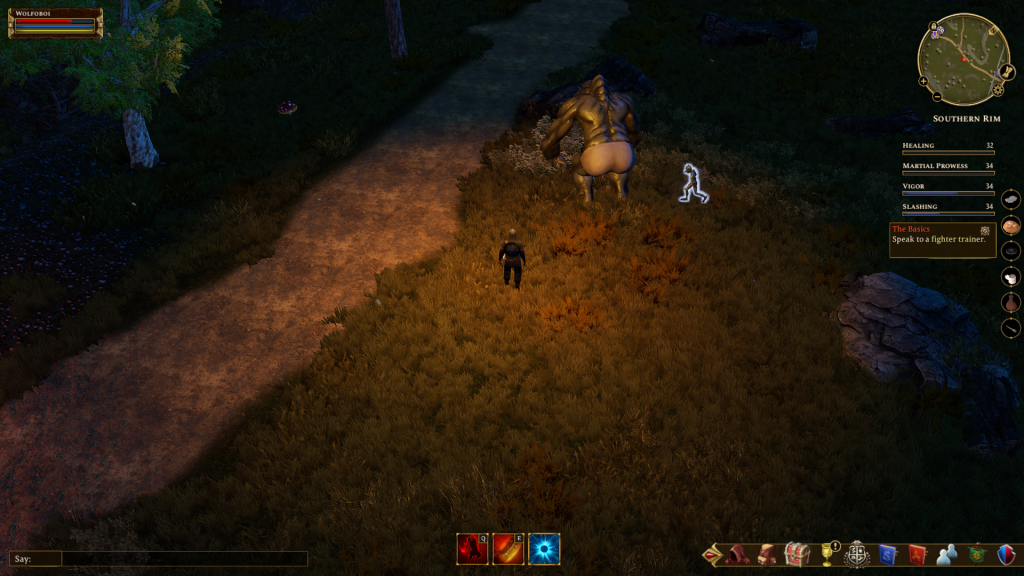 So to the point of being ready to play, it’s time to ask what sort of play I should take up. I’ve made it to the first rank of the Fighter path, which has me just over 30 points in Slashing weapons, Vigor, Martial Prowess, and Healing along with a couple of other relevant skills like Blocking. The point is, the world is a little more my oyster now and I can reach further in to the world.

With that in mind, the poll question is this: How should I reach out in to the world? Should I continue taking up missions to beef up my skills even further? Should I simply wander around the world and look for interesting things to whack at with my sword? Or should I make a concerted effort to join up with other people to do things?

What should be my focus going forward in Legends of Aria? 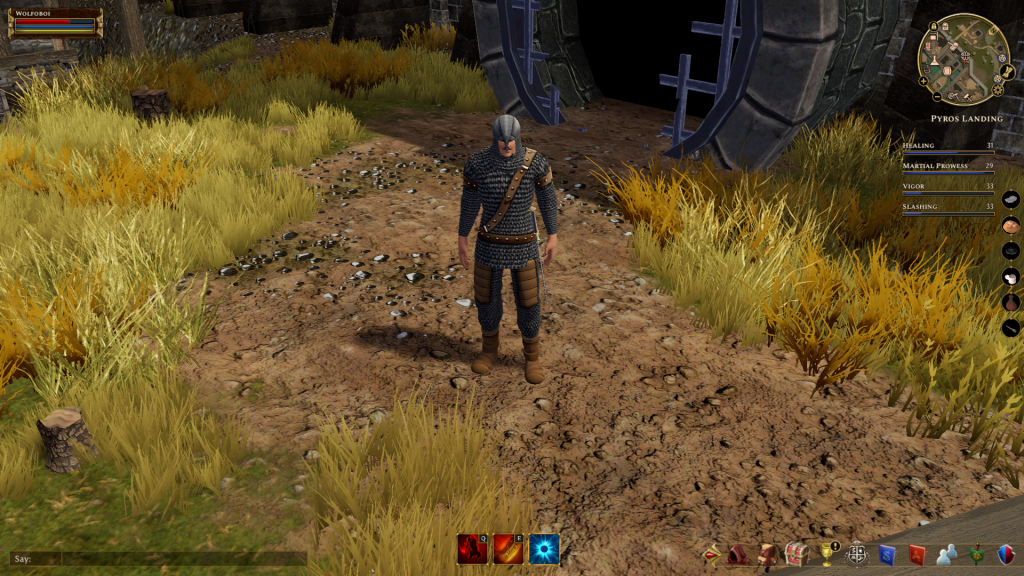 Voting will once again wrap up at 1:00 p.m. EDT this coming Friday, September 13th. As always, thank you for your input and involvement, and (at last) I’m looking forward to where this journey through Celador takes us!

Find a guild or a friend and just do whatever… together :)

Don’t do missions…they’re not going to be any different than the one you already did.