Bungie’s weekly report is once again all about Shadowkeep’s looming arrival to Destiny 2, though this update has lots of details that may make players very happy. Would you like to see literally every single gun type in the game get buffed? Done. Want a calendar of content releases for the upcoming Season of the Undying? You got it, bucko. What about hearing about another positive change to the Reckoning activity? Well, friend, you’re in luck.

While last week’s rundown of sandbox changes was all about subclass abilities, this week is all about weapons. In short: Every single gun type is getting an increase to damage once Shadowkeep goes live, various weapon Perks are getting adjusted or tuned down, and a number of exotics are getting some specific buffs.

Speaking of guns (or more specifically the acquisition of said guns), Reckoning will see an update on September 17th that will remove every single negative modifier in the mode in an effort to improve replayability. A weekly singe featuring a daily rotation of Brawler, Grenadier, and Heavyweight will still be in place.

Finally, the Season of the Undying has a calendar of dates for content releases between October and December, including dungeon and raid launches, the Festival of the Lost, exotic weapon quests, and a new PvP mode called Momentum Control. Click on the image below to get a full-size look at what’s ahead. 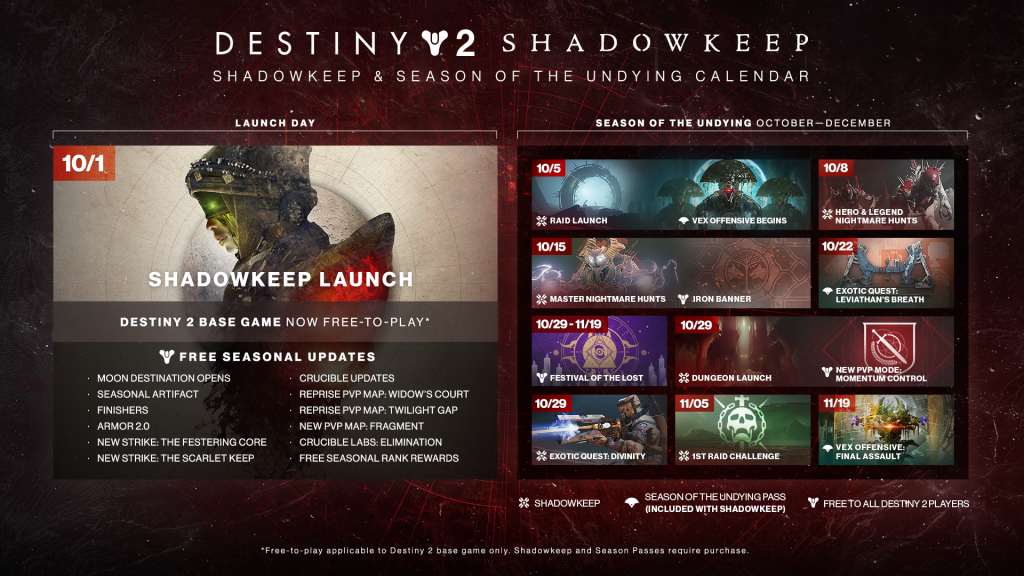 If you buff everything haven’t you in fact buffed nothing?

They decrease TTK in hope to make the game less boring.

Because one thing is to provide acceptable experience to people who already paid for the buy2play game – and another is to make people actually pay for the frustrating and boring F2P experience that is Destiny 2’s campaign plagued by bad game design (such as sponge enemies, enforced weapon switching via different types of ammo, jump puzzles everywhere, end-game mobs one-shotting noobs in starter zones).

Lol D2 is a great game. The initial campaign was fine and I’ll admit the game was launched pretty thin but now it’s great. Your description of the campaign is really different from my experience.

I can’t wait for the game to launch on Steam so I can continue playing.