It would probably stand to reason that my rise in confidence in Legends of Aria would take a hit this week. But mercifully, I’m so full of cold medicine that I didn’t even care. In fact, I leaned into it.

Allow me to set the stage: Voting results said that I should run around in the wilds to find interesting sights, and so with those instructions, I decided to pick a cardinal direction (in this case, north) and run my way along in search of interesting stuff to see and do. What ended up happening was I mostly ran away from things. But at least this time, the things I was running away from were a little bit more interesting. 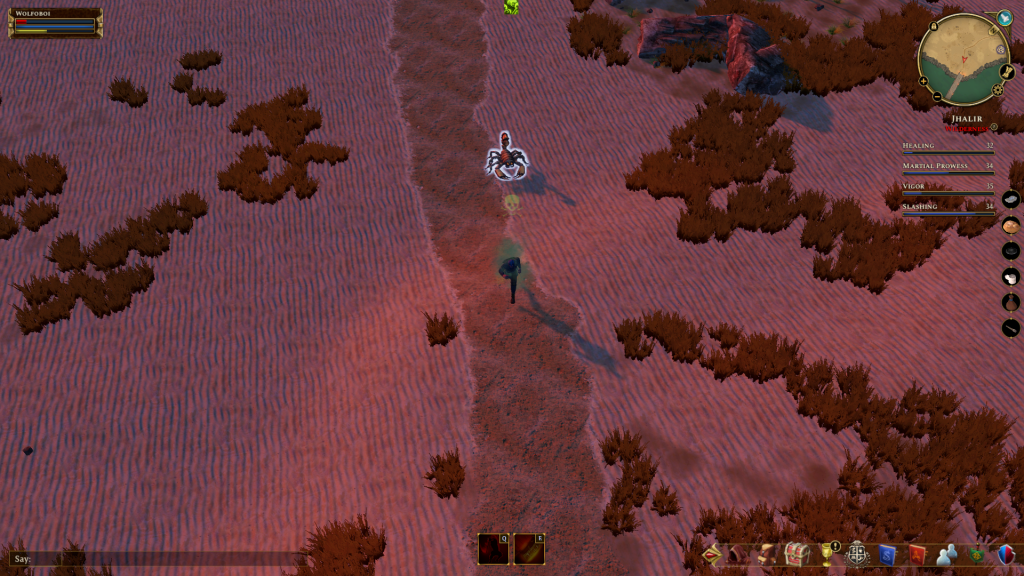 The northern area of where I started ended up being a mostly arid place full of repeating desert textures and similarly themed badnicks like scorpions and beetles. There were also snakes and wolves which I was able to deal with, but most of the time it was insects of various horrifying sizes to run into and completely open, bland plains.

The scenery, such as it was, brought me to realize a massive issue I have with Legends of Aria: its camera. This game is, by all relative measure, classic Ultima Online more or less, or any number of isometric sandbox MMORPGs based on UO, which is perfectly fine except you have to do a lot more work in order to make your limited view of the world more interesting. Most of the time I was just treated to generally flat expanses of a repeated tileset, which made for a lack of motivation. After all, part of exploration is seeing something neat on the horizon and heading to it, and this game gave me no horizon.

There were a couple of interesting sights when I was roaming around, though, and not just the various insects to flee in terror from. There were a couple of ruins of some sort that I wasn’t able to explore due to the aforementioned insects. These were a refreshing break to the visual monotony, so it made having to run from them and then lose them again a bit of a bummer. 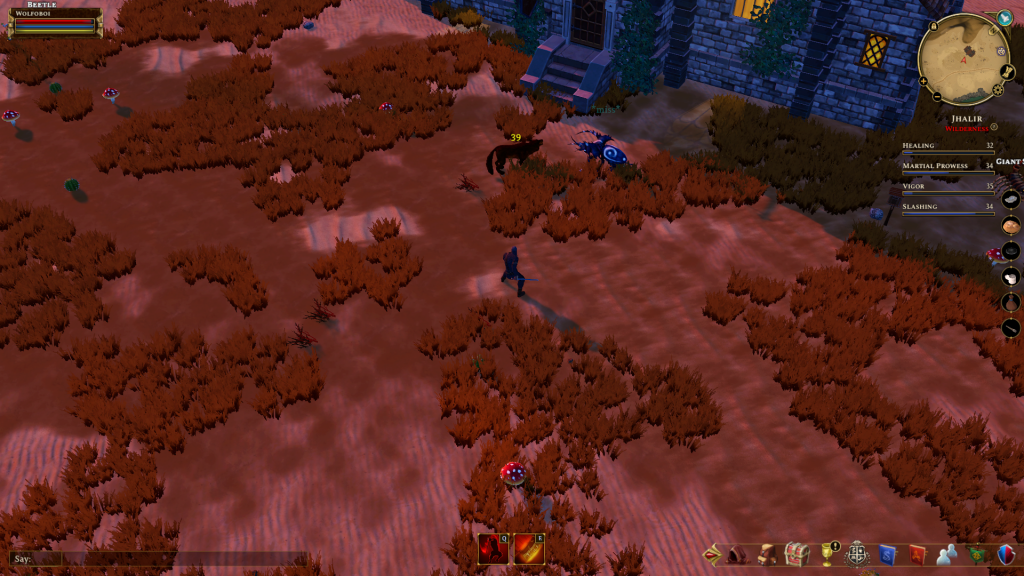 In true sandbox fashion, I didn’t really stick to my single direction for too long, so I was starting to feel that gentle guidance that I had experienced from the very beginning fade away into nothingness. It got rather desolate in rather short fashion out there, especially considering the company I had.

And then, I found another player. It made me sit up in my seat: another person! How wonderful! …oh no, his name is red.

Yup, turns out I was invading territory I suppose, or I was most assuredly out of a safe area and was ripe for the plucking. My eagerness to meet this new person quickly fell in to another spat of running away as the player hopped off of his horse and gave chase. Naturally, his were much high level than me, and he was also a spellcaster of some significant power. Did you know that Legends of Aria has spells that help you teleport forward short distances and throw bolts of lightning at people! I do! Because that’s how I died! 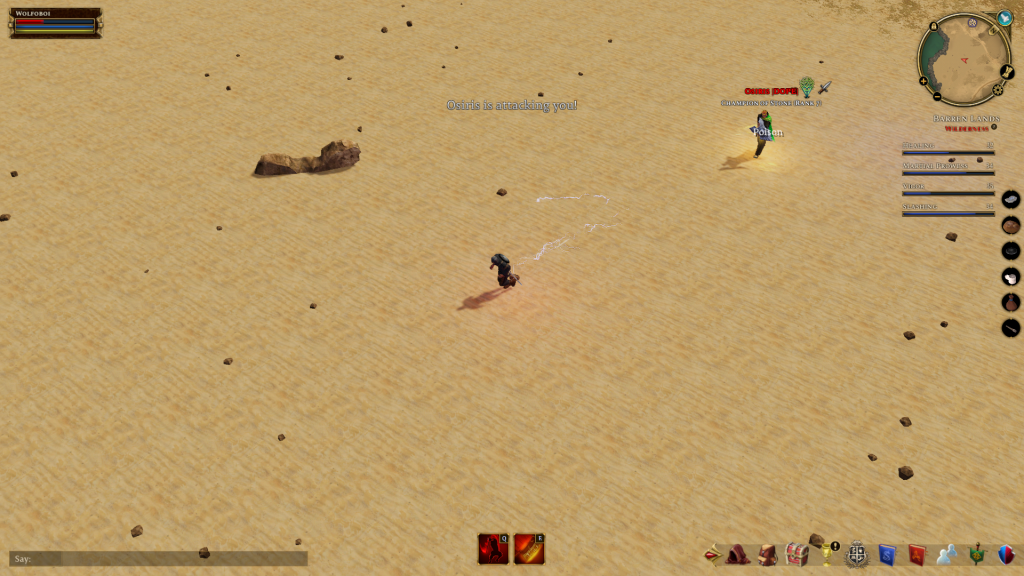 With my first death this far out into the wastes of the desert, I should have been upset. Instead, something inside of me tripped. Some sort of wire was cut and I was hit with a bout of mad laughter. All of my stuff was gone, including my armor, my weapons, and my gold, leaving me with nothing but underwear and a spear.

So you know what? This is me now. I am the Naked Adventurer, born from the failure of combat into what he truly is meant to be. A nude nomad roaming the dunes in search of things to poke with his stick.

With this new headcanon written, I kept on heading northward towards the edge of the zone I was in. I even was successful in poking a couple of wolves to death with my stick. It was surprisingly liberating. I was no longer bound by the worries of staying alive or advancing my character or other woes in the world. I was, effectively, off of the grid. 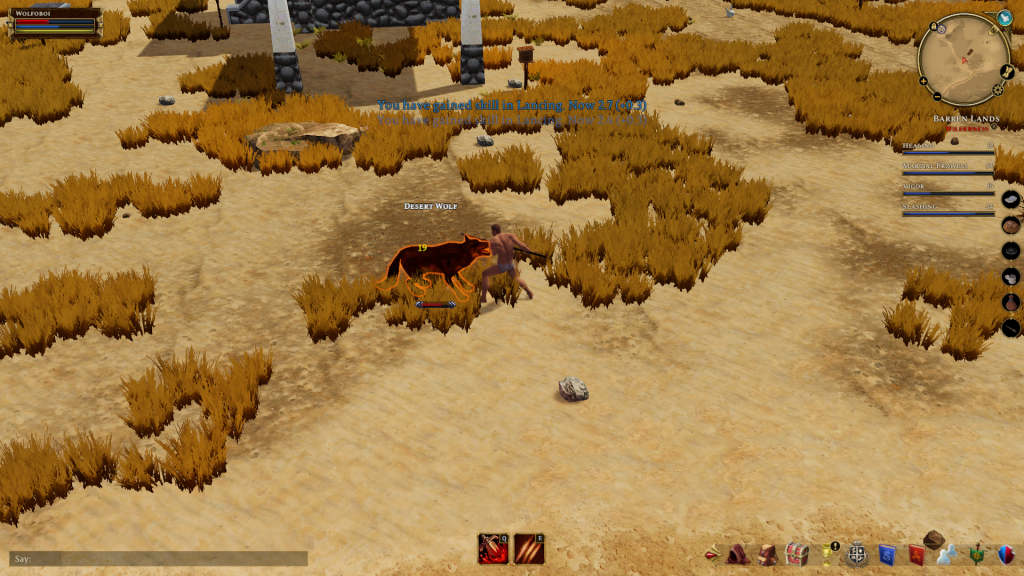 Thinking back on it now, I might have been acting under the haze of NyQuil-induced delerium. In fact, that’s almost assuredly the reason. But at the same time, I also have to admit that I started to really lean into this weird fate of mine. I could simply wander around without really caring about death. I could run into anything and anyone I wanted and not worry about feeling bad for being slaughtered. I could run into another player character and they would be denied getting anything off of me, which means that maybe I also would be useless to attack.

All of the benefits of being a naked adventurer began to pile up. I am becoming one with the nature in Legends of Aria. I am invincible. 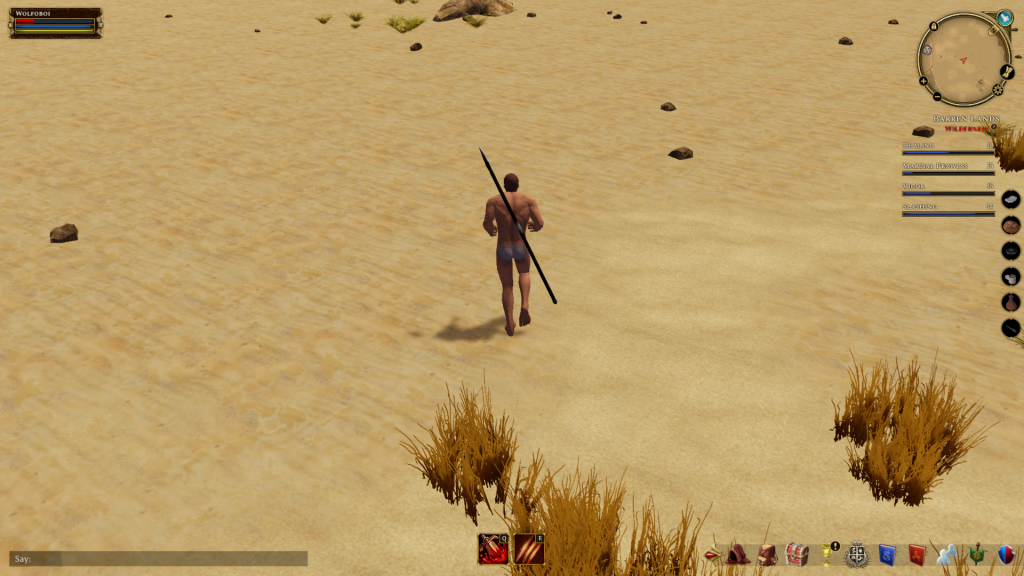 I’m sure this comes off as me not taking this too seriously, and you know what? You’re right. Games are meant to be played, and if my idea of play in Legends of Aria is to be a nearly-naked guy charging around the desert poking wolves and snakes with a spear, then by God that’s what’s going to happen.

Of course, that’s what’s going to happen if you fine folks will it so. My new life as a spear-wielding desert streaker will only move on if the votes say I can. So that’s this week’s poll: Would you like my character to continue to be Naked and Afraid? Or should I roll up a crafter class instead and do something less violent with my time?

Should I lean into my new naked madness? 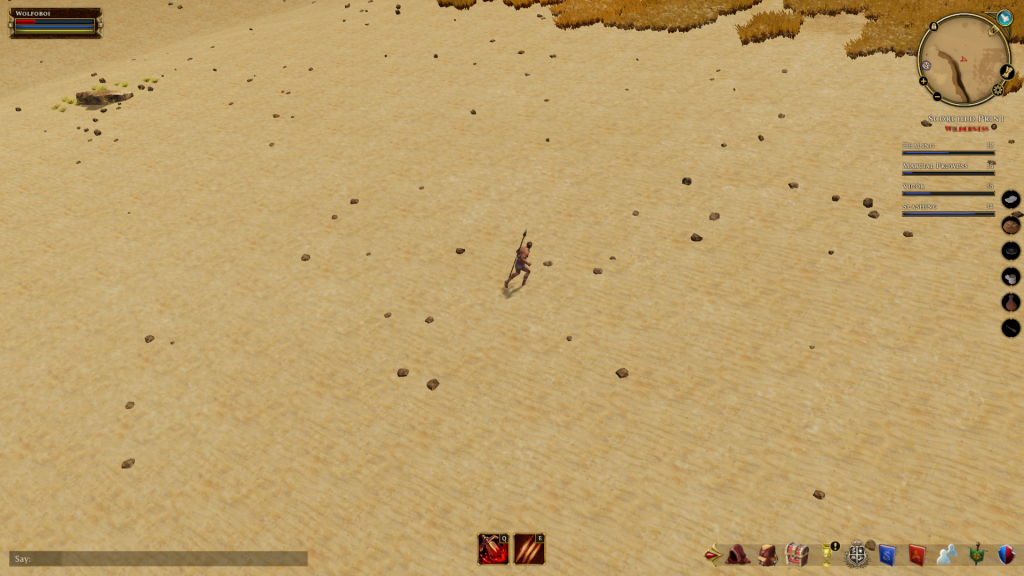 As usual, polling for this week will wrap up at 1:00 p.m. EDT this coming Friday, September 20th. I’m looking forward to seeing this whole thing come to its completely weird conclusion. Or maybe the medicinal haze will have cleared in my brain and I’ll wonder just what the hell it is I’m doing to myself an anyone reading this.

You went to the lone remaining open world PvP area—an area which, as you noticed, is also totally desolate and boring. Try some other areas.

In this week’s installment, Chris inadvertently invents Legends of Aria’s version of Jainism.

Nobody really needs to see Chris’ dagger, do they? :-)

I eagerly await the new image for this. (but think it’s unlikely to happen since I’m a couple of days behind on my reading due to work/travel)

Activision-Blizzard Q2 2020: Year-over-year revenues are up for the first time in six quarters

Bree Royce - August 4, 2020
10
NOW STREAMING LIVE ON TWITCH
OFFLINE - SEE YOU NEXT STREAM!
NEXT MOP STREAM
No events to display.

For Science: Meta-analysis of aggression studies shows no link between aggression and video games

Choose My Adventure: The absurd tsunami that is AdventureQuest 3D

The Daily Grind: How can MMO communities revive a dying playerbase?

The Stream Team: Completing concert collection and powering a ranger in...

Trove has a celestial summer with the launch of the Lunar...

Activision-Blizzard Q2 2020: Year-over-year revenues are up for the first time...