The open PvP regions that make up the Outlands of Albion Online need some adjustment. At least that’s the gist of what director Robin Henkys believes, and many of those adjustments are due to arrive in the Queen update, which was detailed in a recent video.

Tweaks to the Outlands will come by way of five different methods: a new Outlands map, the ability for guilds to build Hideouts in the Outlands, a new territory control system that will replace the current GvG system to let every guild member contribute to the fight, an expansion to the Crystal Realm 5v5 battles, and debuffs to zerg tactics.

Here’s how each point will work out:

The new Outlands map will now have the most valuable resources at the center of the area instead of the far northern end to make it more challenging for guilds controlling the area to hold territory. The map rework will also give the devs an opportunity to adjust other factors like resource and objective distribution.

Hideouts are buildings that guilds can use to create an instance in the Outlands with features like crafting stations, a guild marketplace, a bank, and farm spaces. Once the Hideout is established, it cannot be destroyed, but there are two points where it’s vulnerable — once while being built, and once again for a day after its been constructed.

Territory control will now let guilds take on opponent territories, kill the territory guards, and challenge the territory tower to schedule a battle for the next day during primetime. Multiple guilds can join in on a claim attempt, and the guild that successfully completes a channel on the territory tower wins the fight. 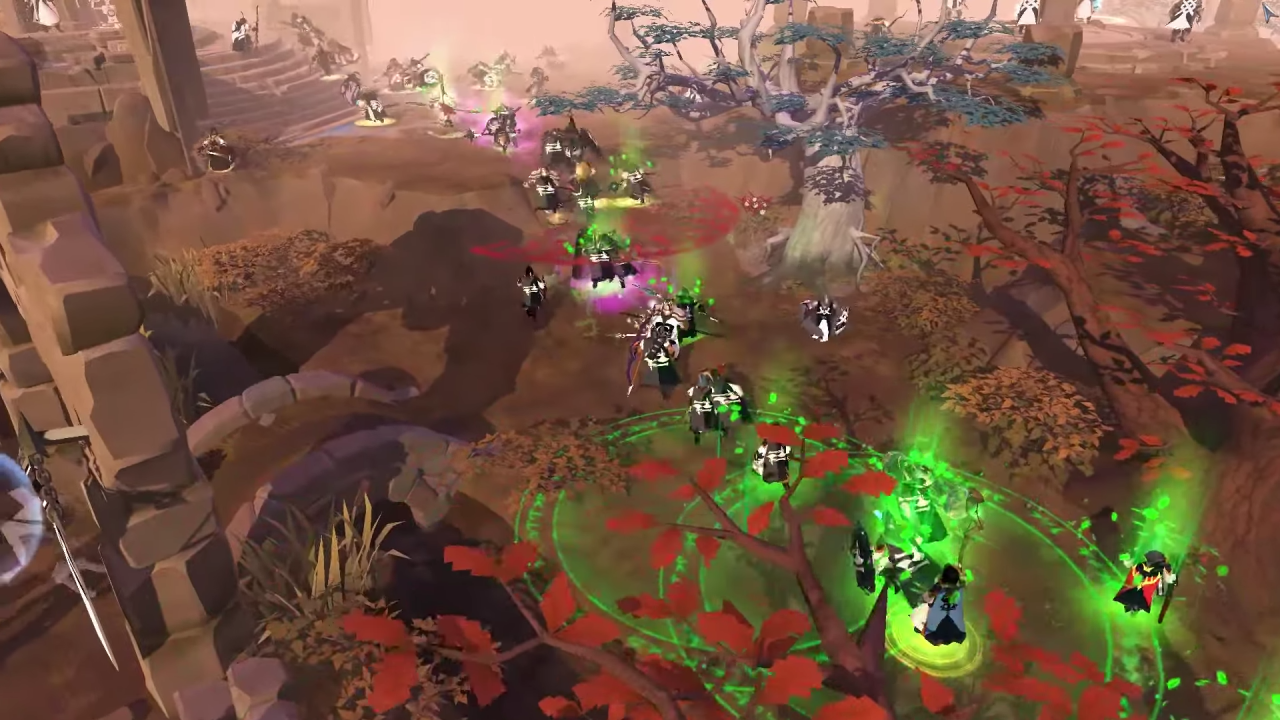 For those who prefer 5v5 fights, there’s the expansion of the Crystal Realm battles. This lets teams sign up for fights via a Crystal Token even if their guild doesn’t own territory. Crystal Realm fights will occur on specific dates and times matched with an appropriate Token level that every team member must possess. These battles work just like current Crystal Realms battles, with full corpse looting and extra rewards for a win, along with an upgrade of your Token if you win. For those who enter these battles from a territory tower, winning can also unlock upgrades for that tower’s crystal like gathering buffs and resource enchantments for resources near the territory tower.

Finally, the devs are employing a clustering system that analyzes how many players are in a crowded area and how much they’re contributing, then decides whether those players are allowed in an area or are moved to somewhere else. This layers on top of a damage debuff that applies to a group of over 25 allies in one area in order to stop zerg tactics.

The Queen update itself is “still a while off” according to Henkys, but there’s more information provided in the video below, so make sure to give it a look.