The desert sun rakes its fingers over my bronzed skin like I am the coals of a forge. Indeed, I am the forge: the thing that produces strong weapons, not the iron placed in the flame. I am the flame. I am the desert of this land. This is how my Legends of Aria story closes. Not in failure, but in a sort of unintended triumph. A rebirth.

The epiphany came to me in defeat. I still remember my first death. The sound of my heart thrumming in my ears as I ran for my life, only to hear its steady beat falter and fail. I shed the weight of armor and the weight of responsibility then. I was reborn, my prior life the shell of the egg that shattered and my new form clawing its way out. I saw my true form them. 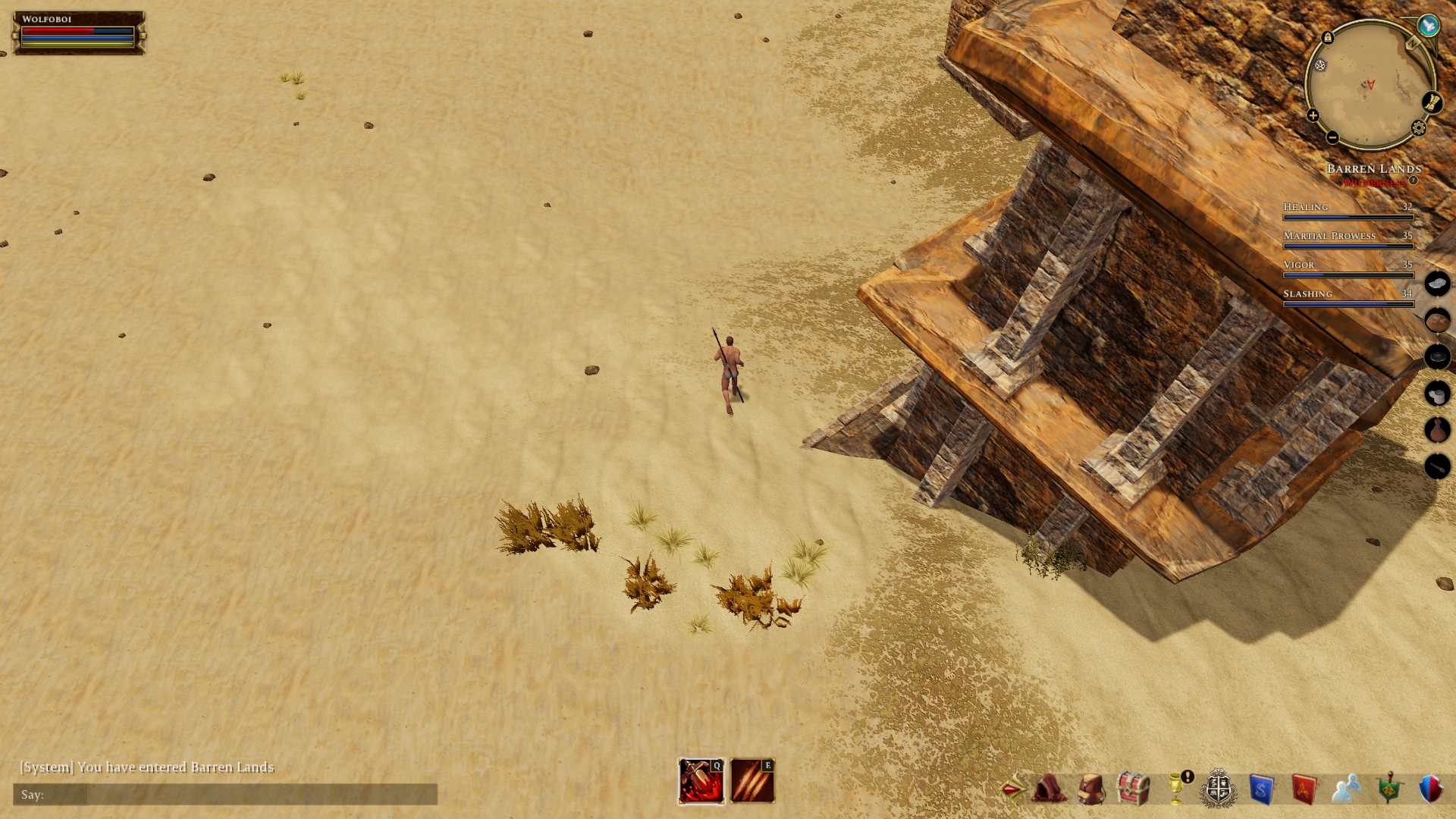 For a long time I had been coming to this world – this sandbox – the wrong way. I was living my life ready to achieve a win condition of some sort. A goal that was meant to be achieved and strived for with everything I had. Something like an endgame. But in the moment of my first death and true birth, I realized that I shouldn’t live for a goal, but I should just live to live.

Some voice whispers to the back of my head. They’re led by sort of super consciousness that steers my actions. It seems to have lived through countless worlds before, viewing many realms far beyond just this one that I traverse now. It bears the wisdom of a multitude of world experiences and is guided by a court of others that steers its steps, and they in turn steer mine. Collectively, these voices all seem to tell me one thing: “Just live out here. Be free.” And so I am.

These voices – the Prime Voice calls them the Readers – are wise beyond my understanding and powerful beyond all measure. I promise it’s not just the scorpion stinger I ate talking, I swear this is all true. It feels true. I can sense it’s true. Why else would I be out here? 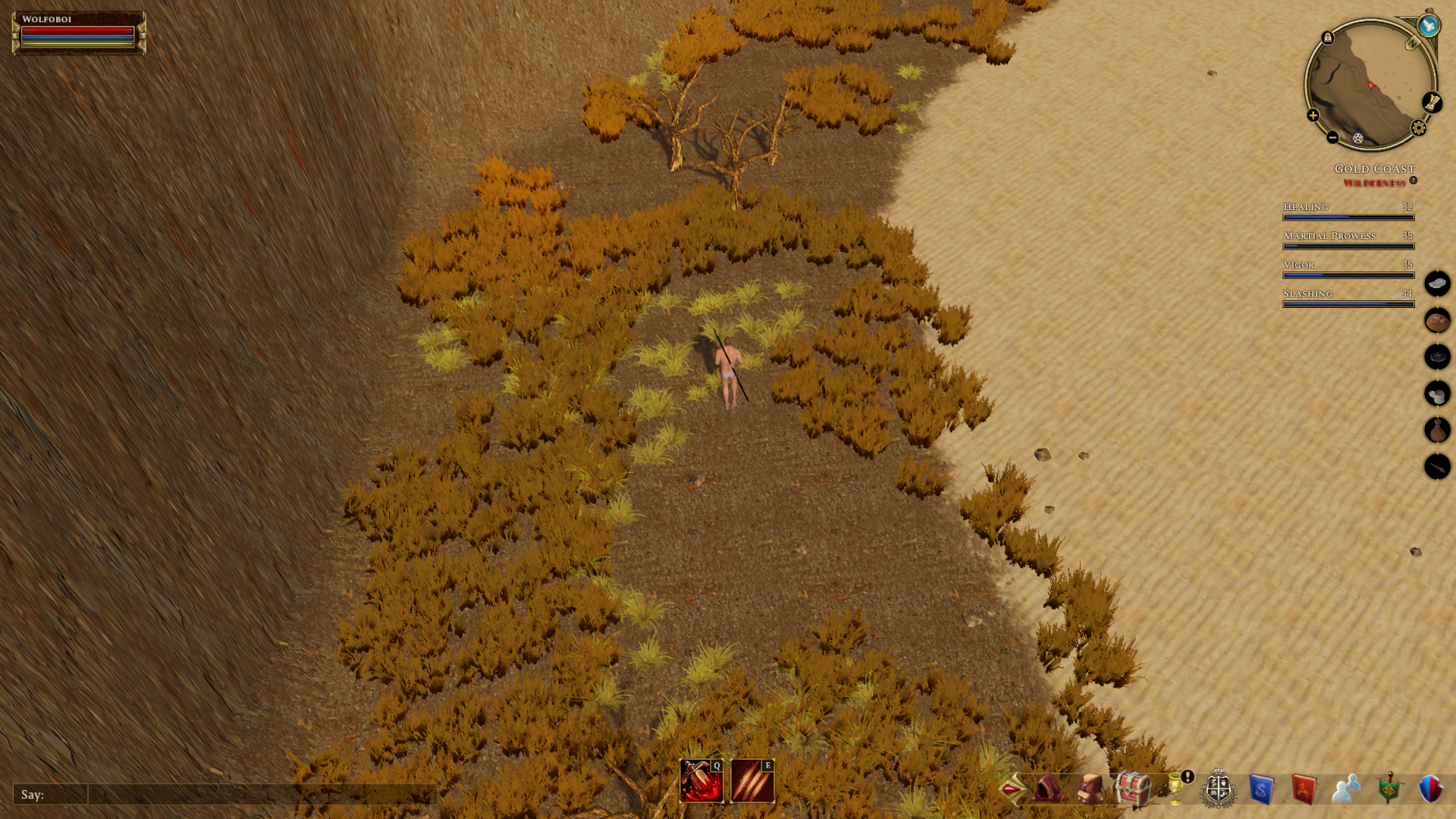 Yes… why? The question remains of why I really am out here. I ask Prime Voice about their decree, wonder to them aloud as I roam the wastes what sort of point there is to this. I hunger instinctively for the yoke of my past life and the comfort of its pulling direction, but the Prime Voice reminds me that endgame is futility and that the chase of a win is missing the point. “This stuff is supposed to be fun, and isn’t it fun to be free of inhibitions and responsibilities?” I look down upon my unclothed form and I am inclined to agree.

And then I was struck down by a lizardman in an underground dungeon, am reborn again, and laugh at the futility of their attempt. Yes, I was struck down. Easily. Handily. Some might even say embarrassingly. But I rose again, the same as ever, undeterred and unworried, while they lived out their own miserable, hidden existence. Suddenly what the Prime Voice and the Readers say makes sense. I no longer care about anything other than being here. I have no worry to cloud my judgement, no needs to chase. I’m just existing. 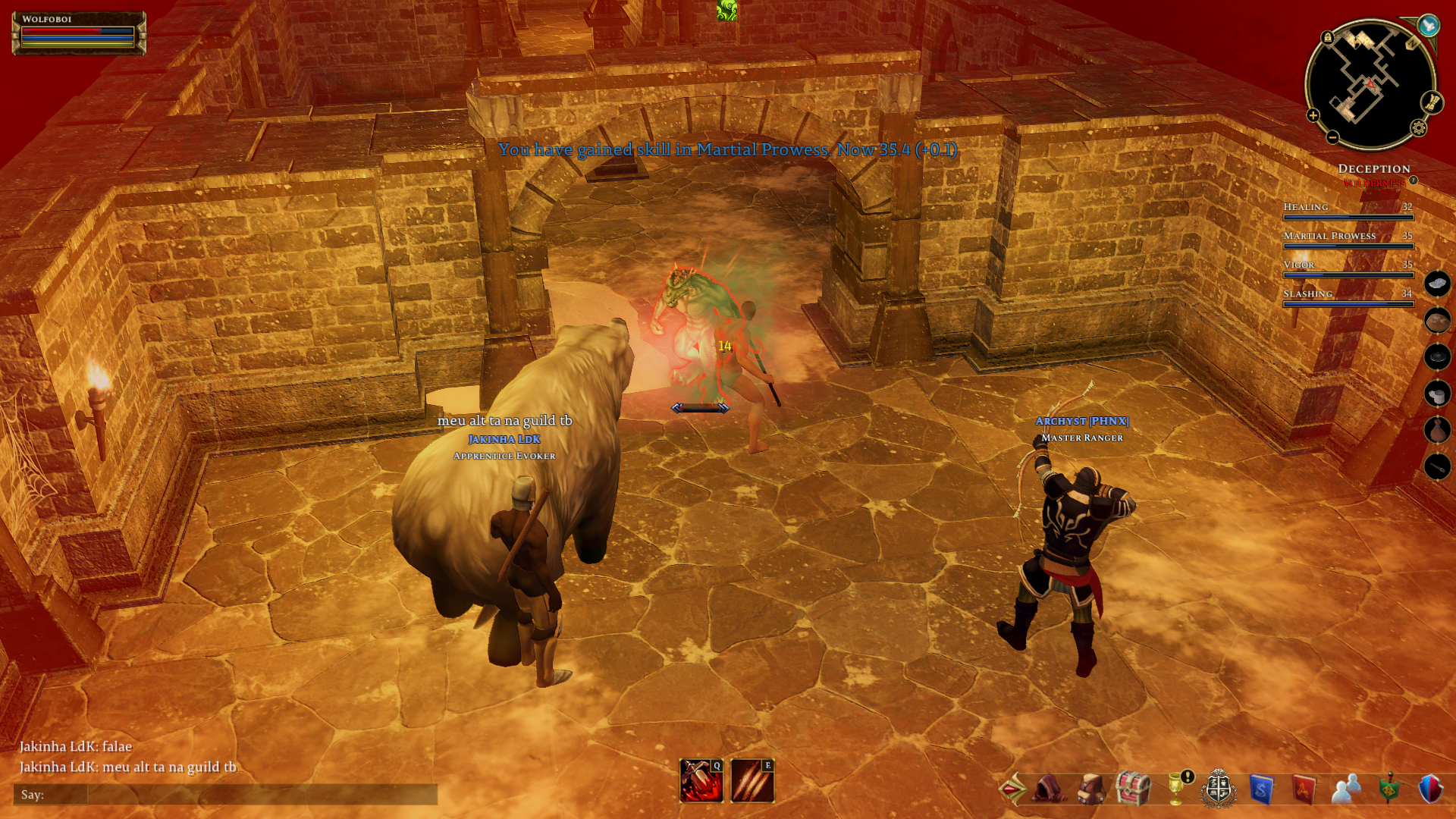 …boy that was weird, wasn’t it? I apologize for the long in-character tangent, but I couldn’t help myself but play around with the idea of madness and ambivalence both turning our Legends of Aria character into a sort of sun-baked mad guru. I hope it was at least interesting to read!

Ultimately, the point of that whole piece was to illustrate just how I feel about failure in sandbox MMORPGs. When you lose it all, you kind of have to lean into the failure and accept it. In my case, I coped by making my now “defeated” character a sort of immortal desert wastrel, but I can appreciate how building yourself back up to your previous strength can be gratifying. Hell, even having planned for the eventuality can lessen the sting. But I think I’ve learned a valuable lesson with my time in Legends of Aria: Sometimes you have to accept a missed step and move on. In some way.

Even if moving on means turning into a naked lunatic. 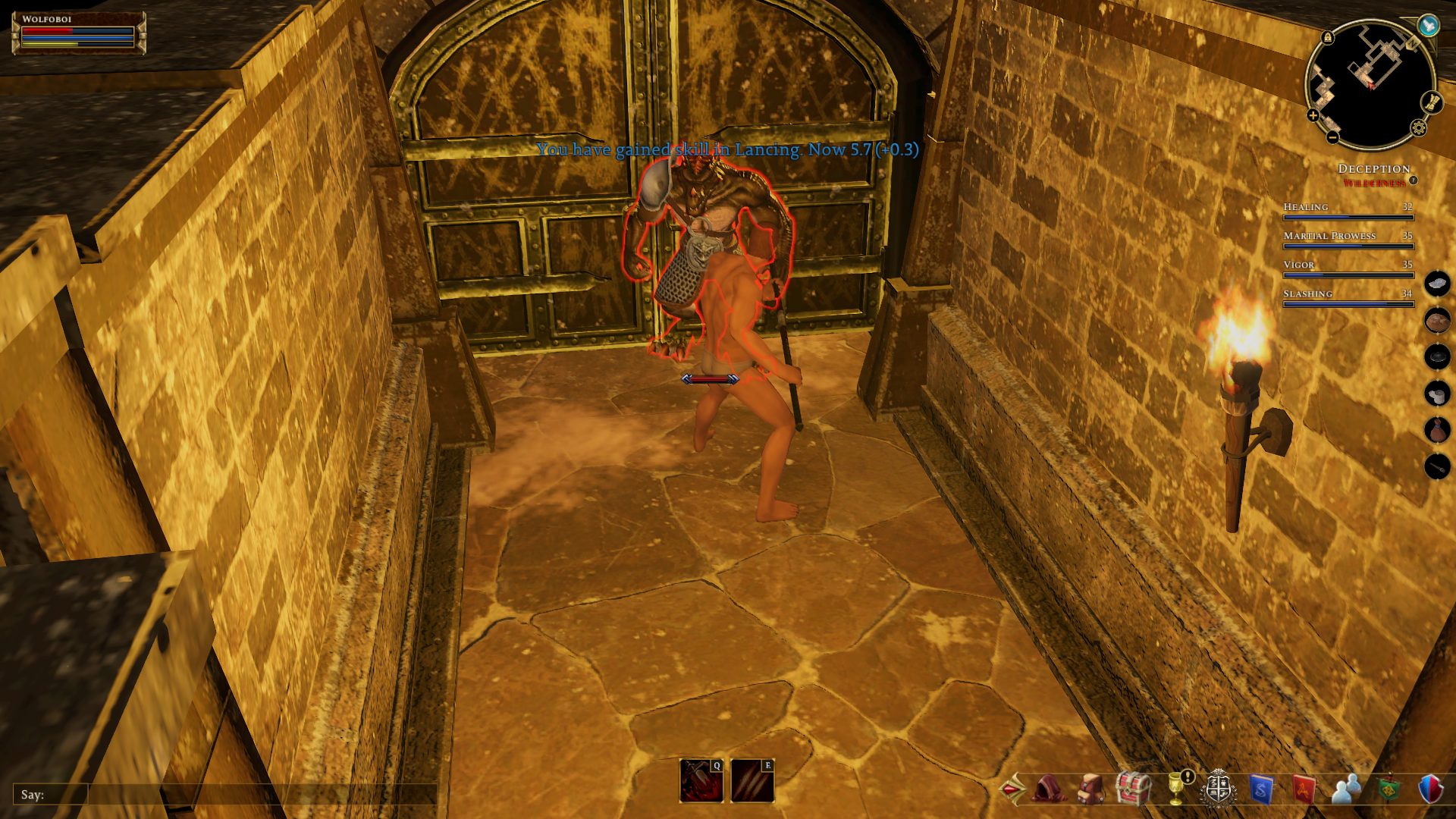 I think I’m done with this game and am ready to move onto another one. I feel the need for some ARPG action this coming month, and I have a couple of thoughts on where I should be heading next:

So, which game full of loot pinatas should I head to?

Which MMOARPG should I go to? Choose My Adventure! 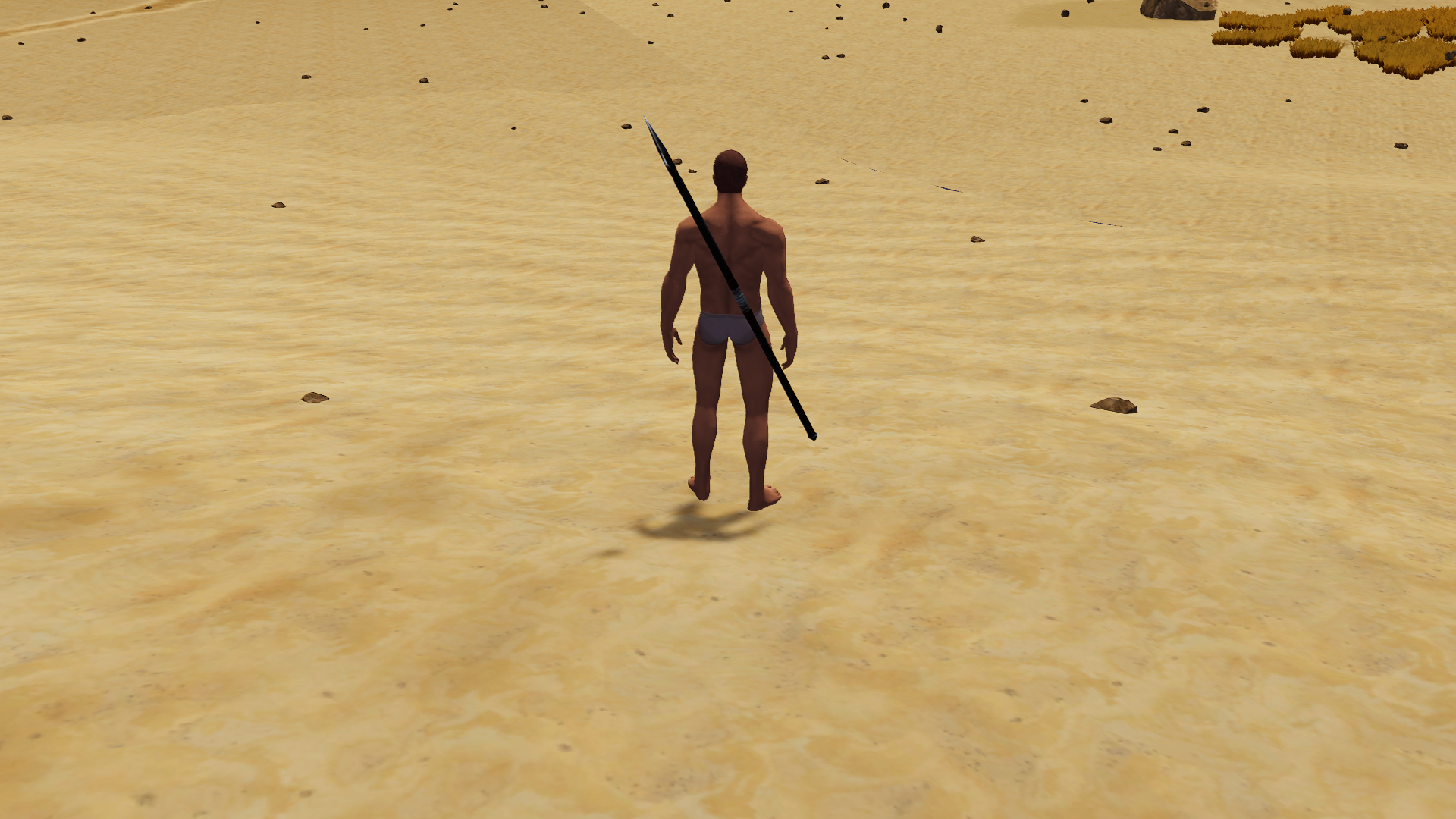 As usual, polling will be closed up at 1:00 p.m. EDT this coming Friday, October 4th. As always, thanks to everyone for participating. I hope that this month’s column didn’t end on too weird of a note for too many people. It’s not the NyQuil’s fault this time, I promise. This time, it’s because I am a huge roleplaying nerd and saw the opportunity for some character story.

I thoroughly enjoyed the in-character tangent. Thanks, Chris. :)

Why not Maplestory? the original one?

MassivelyOP’s 2020 guide to Halloween across the MMO world

Lawful Neutral: The Epic vs. Apple lawsuit – when titans are tweens

PSA: Astellia Online is handing out seven-day codes to try it...