What’s in store for Old School RuneScape in 2020? Plenty. Before the big stage reveal at this year’s RuneFest 2019, John Colgrave, product manager for OSRS, shared some highlights, and then the big reveal exposed even more details. Players get to look forward to the addition of the vampyre realm of Morytania in the next big expansion coming in early 2020, complete with a new city, a continuation of quest lines, a new group boss, and a high-level agility course. Additional content coming includes an all-new league game mode (starting this November!), and a community-collaborated clan system.

I’ve just returned from attending the whole event in person – here’s everything I found out that pertains to OS RuneScape!

If you’ve been eager to continue in Morytania after the small taste of it in a Taste of Hope quest in the Myreque series, you’ll be happy to hear the lands are opening up even more for PC and mobile Old School RuneScape players early next year. The penultimate quest in this series (yes, there will be one more!), Sins of the Father, will open up. Completing this — meaning you face and defeat Lord Drakan himself — will ensure access to the vampyre city of Darkmeyer.

Darkmeyer holds more than just just a quest line: It’s a fully functioning city for players to participate in skilling, banking, shopping, and so forth. Those who need to up their agility skill will be especially happy to learn that there is a special new training dungeon just for them; they’ll be raiding this Hallowed Sepleche while racing against the clock to earn yourself chunks of agility. Don’t think it will be a breeze: You have to use your agility skill to dodge fireballs and traps galore. “If you’re not fan of doing laps around agility courses for about 2,000 hours to get your agility skill cape, you need to go and do this quest,” Colgrave said. 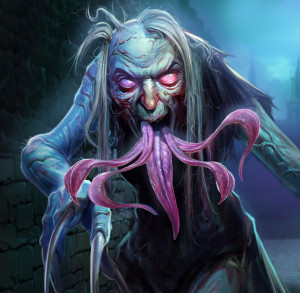 As a part of the expansion, a new group boss is being added: The Nightmare of Ashihama. Here’s how Colgrave put it: “We’re going more traditional with this. Rather than the new, shiny boss experiences we’ve seen with raids, this is more of a group encounter with an NPC in a set environment, unique mechanics, and of course juicy big boy rewards.”

Out on the island of Ashihama are sirens, but no dreams can be had here — only nightmares. One siren had enough and wanted to end this. Adventurers were able to drive out the being that devours dreams. Known as The Nightmare, it fled west, and now it feeds more.

In a new twist, the loot that will be available from defeating this boss will be determined by the players; following in in OSRS’s tradition of voting for what content is included in the game, devs will be taking suggestions from players, and then a final vote will be used to determine the loot table.

Come and get your clans!

Jagex recognizes that the community is the backbone of the game, and clans have been an integral part even when there was no official support for them. “With community being the heart of our game, we want to be able to not only support them but empower them — really bring them together,” Colgrave said. So the team is changing that: A new clan system is in the works, though it needs considerable technical work before it can be implemented. We are talking full-on clan support with a whole new feature set, including (but not limited to):

What else might be included? That could be for you to decide: Jagex is also inviting select clan leaders to the studio to help shape the upcoming clan system. Those chosen will have an all-expenses paid trip to Cambridge, UK, to weigh in themselves. If you are an OSRS clan leader and you want to participate in this, fill out the required form and submit it before 7:00 p.m. EDT on October 31st to be considered.

Ironman with your friends

There’s an added bonus to creating the tech needed for clans, and for those who love playing with their friends (like me!) but had to ditch them in order to play Ironman mode, this next announcement is for you. Yes, Group Ironman is happening. Colgrave explained that this has been a much-requested feature since the first Ironman in 2014. Soon players will be able to participate in Ironman in groups of two, three, four, or even five. Within these groups the restrictions to trading will be lifted, meaning friends can specialize and assignments can be delegated.

The Group Ironman will be a fresh playing field with all players being in teams, and each group size will have its own HiScore race. Note: Your group can always increase in size, but it can never decrease in order to maintain the sanctity of the competitive brackets.

Players do not need to wait until next year to get new content! Although the new game mode of leagues was revealed before RuneFest, the first league’s launch date was announced at the show! Twisted will begin on November 14th, well ahead of the upcoming expansion. Why is it twisted? Colgrave explained,

“The goal of the league is to essentially to test your game knowledge. How well do you really know Old School? If we twist any of these elements can you really keep up? And there’s a stack of achievements and tasks — so many that you can’t complete all of them, but there’s something to everybody.”

In a new move, these points earned will be transferred to the main game, where players can purchase cosmetic and powerful the rewards.

In Twisted, players will be in Ironman mode locked in the Kourend and Kebos regions, attempting to unlock as many points as possible for relics and rewards. The Twisted League will last for two months. To participate, you’ll start on a fresh account on a separate game world. You’ll also get to choose a single super-powerful relic upon starting, but you’ll need to choose wisely, as you can never go back on that choice. Do you want to start the game with a limited run energy (Colgrave noted there are no agility courses in the leagues), saving 80% of your ammunition, or getting double monster drops? Hey, no one said the choice would be easy!

For a full rundown on the rules, tasks, relics, and rewards, check out the official site. You’ll also find a handy FAQ about the league! Then stay tuned because we’ve got more coverage of RuneFest still on the way!