So it turns out that the CMA readership would really like to see me run around with a murder train following me. This week’s Torchlight Frontiers adventure is all about the Railmaster, a pet class that’s sort of not really a pet class but also kind of is? It has a lot of the same problems as pet classes, in my experience, but at least it tries to alleviate them a bit.

As my time in the City of Heroes CMA showed, I’m just not a fan of pet classes. They tend to be boring at best or just saddle you with a necessary AI idiot as your partner at worst, with most of the gameplay not being about actually playing the game so much as micro-managing your pet or pets so they can play the game for you, which ends up less being about tactics and more about telling a digital toddler to stop running into the wall and seeing it do it anyway. The Railmaster’s pet train, by comparison, doesn’t really toddle off so much as follow you like a faithful puppy. A faithful puppy with cannon on it. 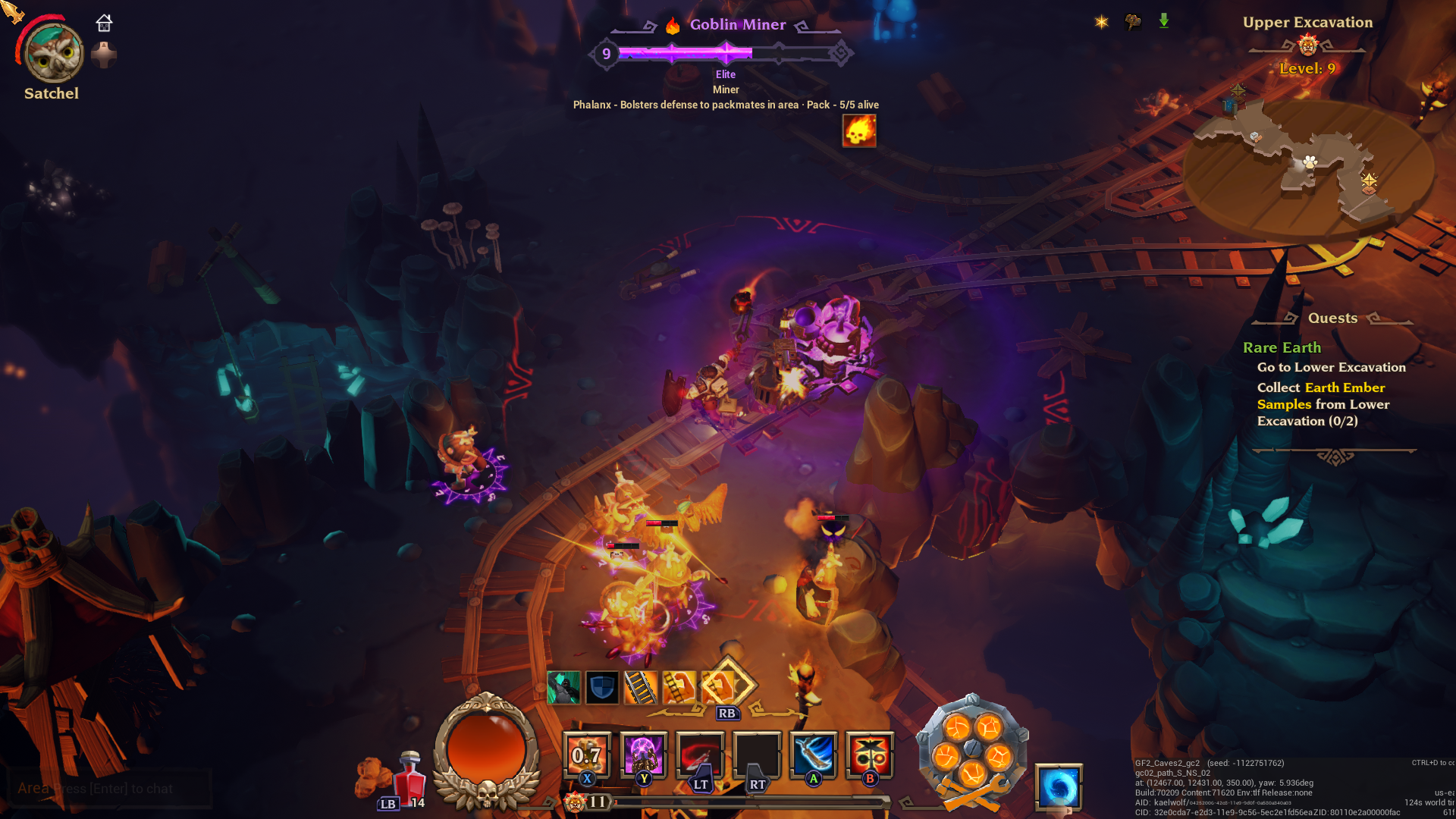 The Railmaster is a weird little thing. On the one hand, it’s a pretty competent little melee fighter in its own right, capable of using a wide swath of weapons much like every other class in the game. On the other hand, it has a lot of the same pet reliance as other pet classes, making one focus on using their train and buffing up its damage output as the means of primary damage. To its credit, the train does seem to have a wide variety of tricks, with a single-target basic attack, a cannon that can fire on its own or be ordered to fire a shot that leaves a burning area on the ground, a shield generator, a shotgun, and even a flamethrower. All in all, it’s a pretty little hate machine.

It’s also generally obedient. As I mentioned before, it follows you directly, following the track you automatically lay down as you walk and never veering from the course you set it. It will focus its fire on pretty much whatever it feels like, but it didn’t really seem like its target acquisition AI was a hindrance. In fact, it seemed to hold its own, often laying down fire reasonably well to one group of spawning mobs while I directly attacked the other. I wouldn’t call it human levels of tactical brilliance, but it seemed to be okay enough that I wasn’t wondering what it was doing. 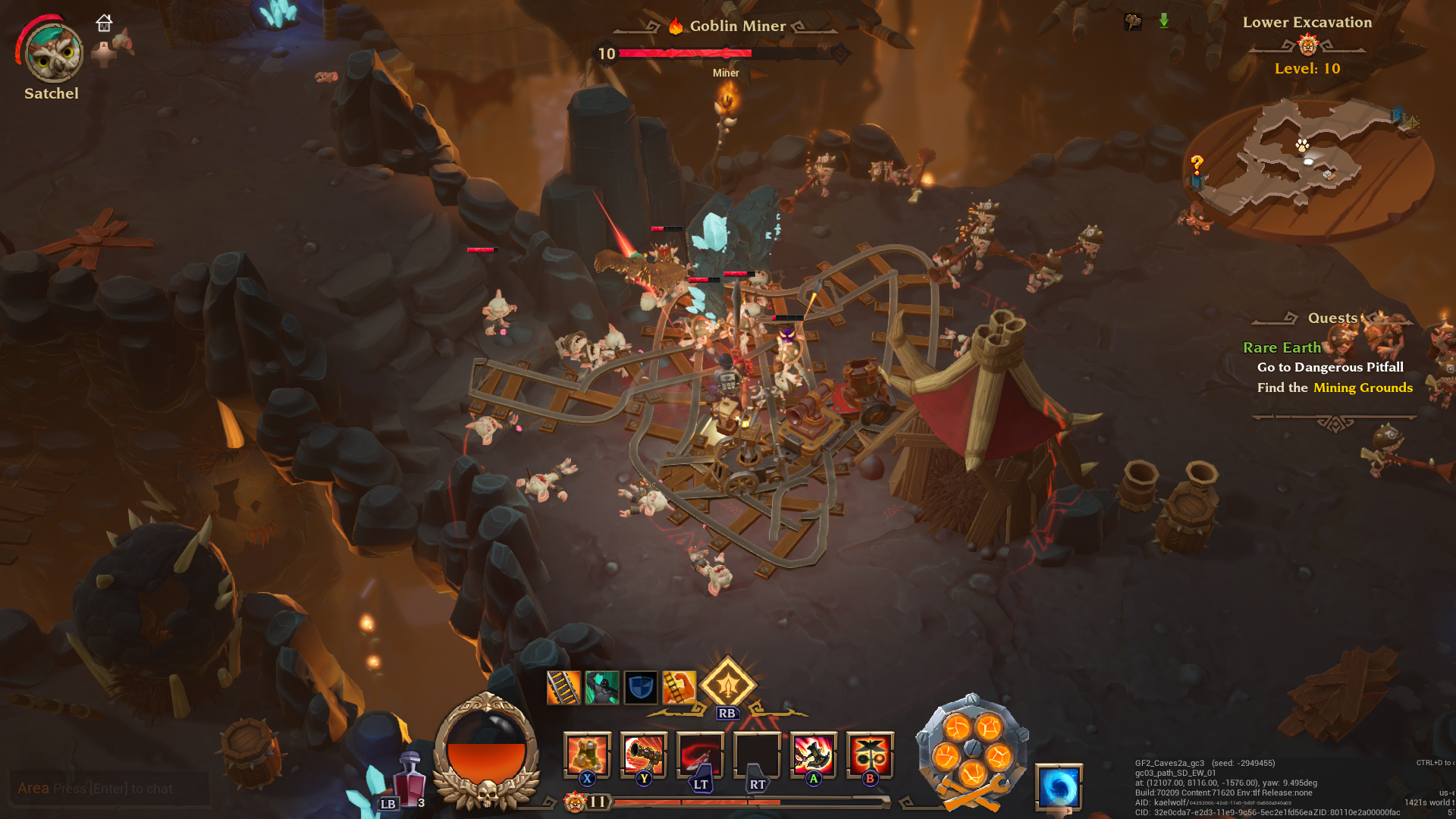 As obedient as my train was, however, its obedience did come with a bit of a cost at a couple of points. Most of the time in my early going, I was simply using a “set and forget” strategy, simply summoning the train and having it follow along as I waded into the thick of things and smashed enemies with whatever weapon was the shiniest at the moment. The problem with this playstyle, however, was that the train would follow the track I laid down precisely, meaning that if I went back and forth in place a few times before moving downward fully in a different direction, the train would to. There were a few engagements where my poor train would orbit around itself a few times before it caught up.

The best tactic, I soon learned, was to find a way to walk which would line my train up to an optimal position, then use the same button I pressed to summon the train to keep it still. This worked most of the time and allowed me to occasionally set up bottlenecks where my commanded cannon fire shot would create a big spot of burning hurt that enemies had to wade through to get to me. This tactic was further rewarded when I unlocked the Shield Car, which allowed me to summon forth a protective bubble when I wanted it to. I also at one point had a weapon that increased my damage if I was near my train. All in all, it looked like hugging the train was the best bet.

This, however, once more went into that whole thing about pet classes that I hate: babysitting. Fight situations would often change where mob spawns moved and I would have to take a moment to reposition my train and myself instead of quickly adapting to the new threat. Furthermore, the arc of my commanded Cannon Car’s fire wasn’t immediately apparent; there’s no marker on the ground to tell you where your shot will land, nor can you actually tell it to fire in a specific area, you just have to look in the right direction and kind of gauge where the cannonball will land. It’s not exactly ideal. 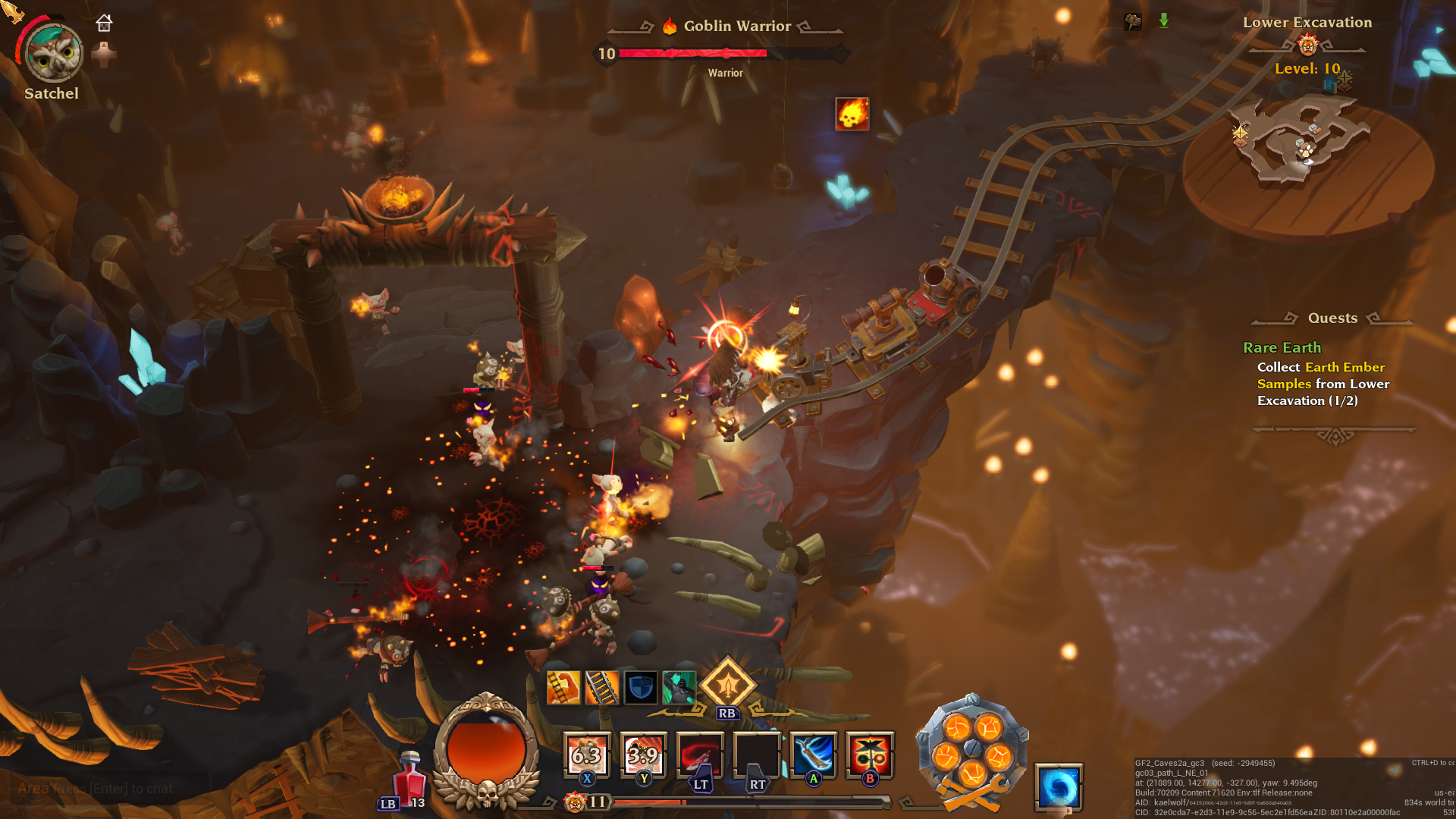 My tactics appear to be further changing again since I’ve recently unlocked the Shotgonne Car, a weapon attachment that replaces my Shield Car with a blaster that fires a cone of hurt on its own or fires a penetrating single shot on command. Again, this shot has the same problem of not really being an aimed skill except for having it fire at what you’re facing, but it also seems to be an attachment that rewards having the train follow me more closely instead of me having to arrange where the train should park.

Ultimately, I’m having a harder time getting my brain malleable enough to really use the Railmaster effectively. It toes this weird grey area between being an idiotic AI that needs to be coddled into position to be even effective and a self-sufficient killing machine that surprises me with its resourcefulness. All the while, I’m looking like the clowniest of clownsuits with the sort of gear I’m getting. The whole experience is just… odd, to say the least. In an intriguing way, though. 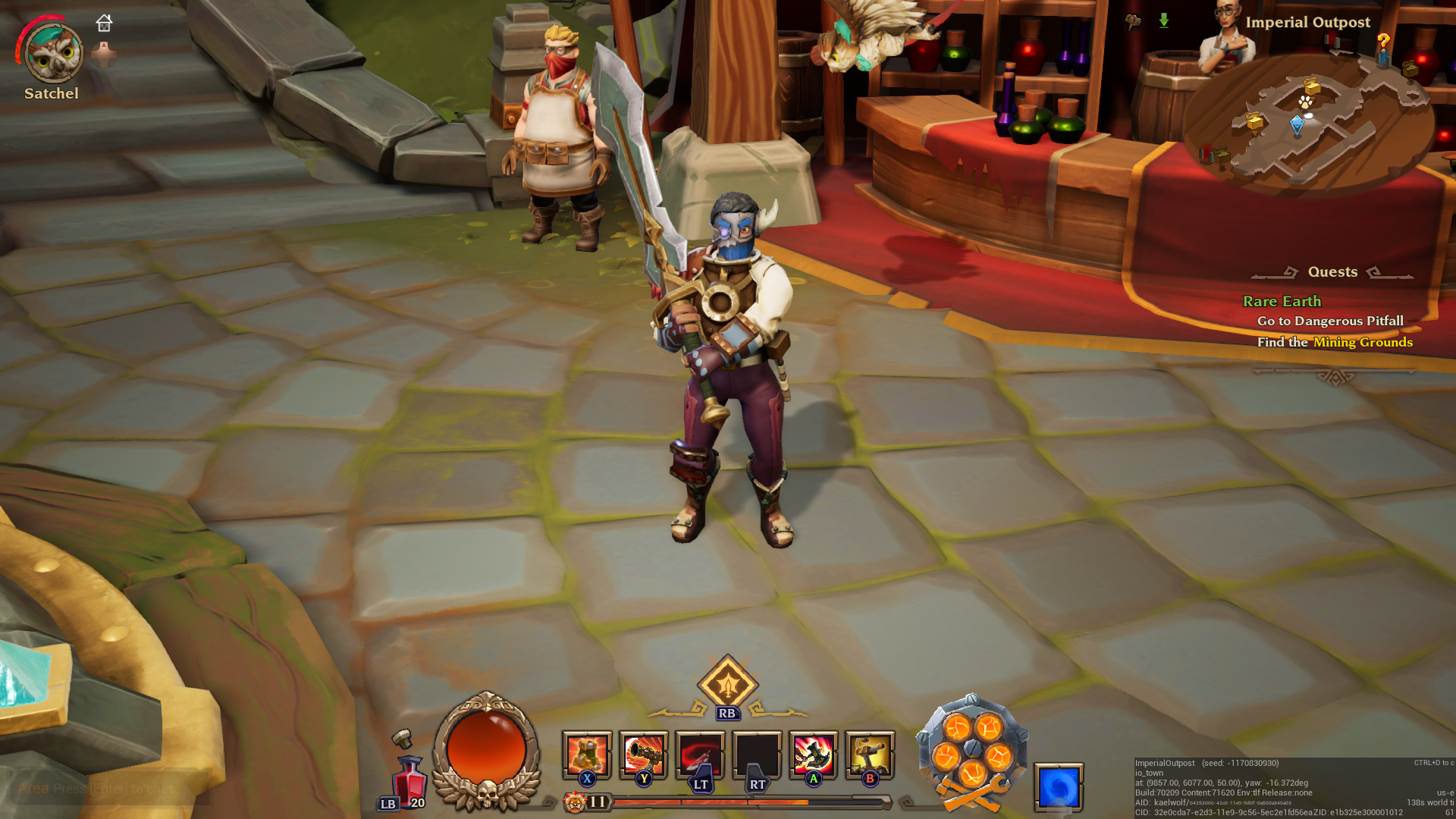 I think I want to follow through with further Railmaster gameplay, but I once more need the help of you fine folks on how to focus. On the one hand, I’m inclined to try to work out the intricacies of train pet ownership, but on the other hand I’m of the mind to say “Hell with it” and try to take on the challenge of being a petless Railmaster. So that’s our first poll question: How should I build my character?

Second is the question of difficulty. One commenter noted that Torchlight Frontiers is easy, and while I’m not the chest-thumping, roguelike-loving sort, I can see that things in this game are a bit too mindless and so I wouldn’t be against a little bit of a tuning upwards in challenge. I leave my fate in your hands.

Should I make things harder? 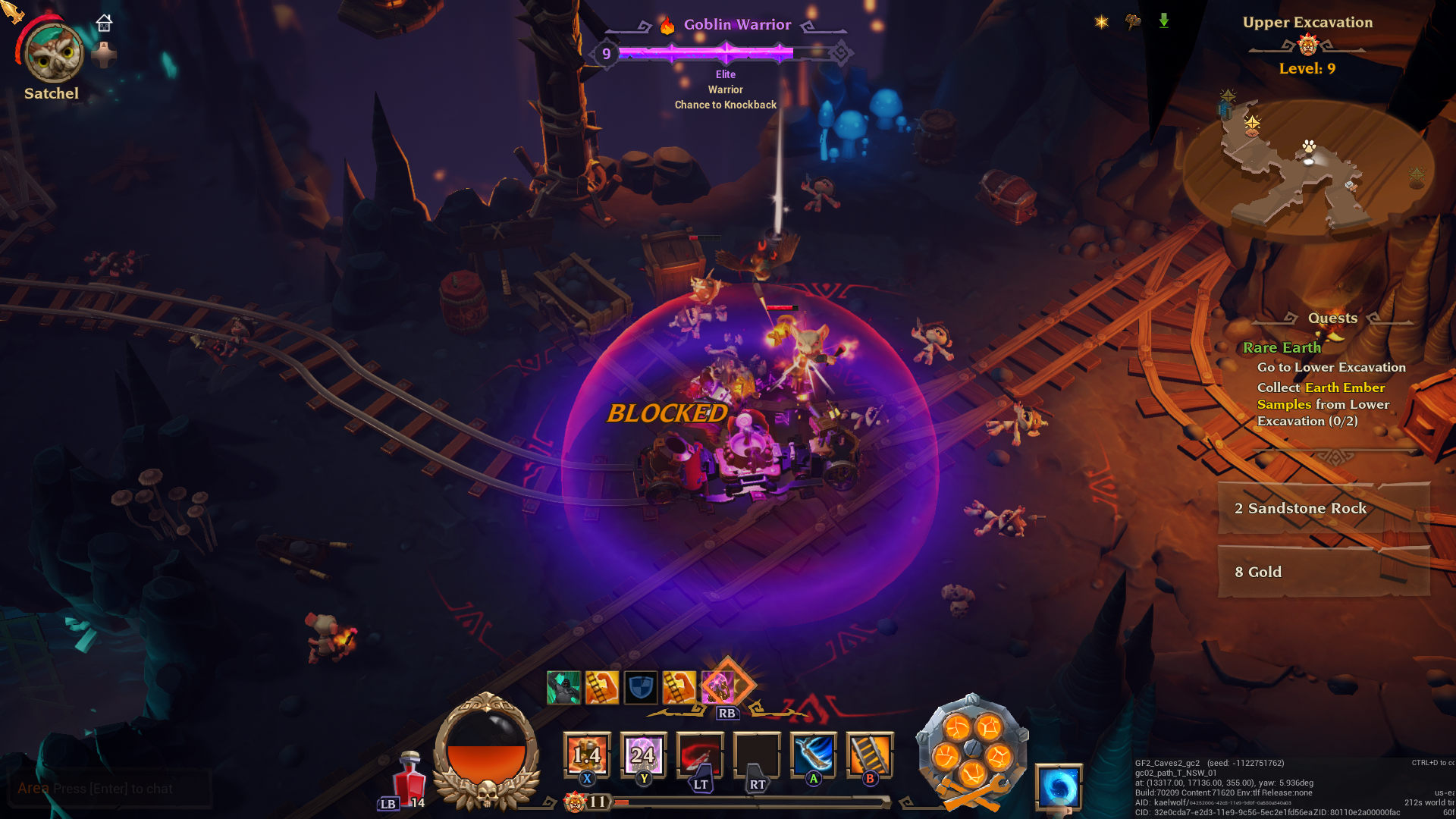 Polls will once more close at 1:00 p.m. EDT this coming Friday, October 11th. I’ll be, as ever, looking forward to the results. Thanks again for making this adventure for me!

The pet classes in torchlight games are some of the most useful. And everyone gets a pet in these games. All classes are pet classes.

Is this out for the public?

No, but you can sign for alpha and try to get a key.