Last spring, we covered an incredibly ambitious new MMO called Oath. Developer Ready-Up Studios rolled out a $35,000-ask Kickstarter to build a free-to-play, action-combat sandbox MMO using Unreal Engine 4 and SpatialOS, with PvP modes, PvE dungeons, raids, and group-centric content on tap. Even at the time, writers and readers pointed out that the indie Ready-Up Studios wasn’t doing media outreach or expounding on the qualifications and history of its team, but that didn’t stop the Kickstarter, which funded at $67,000, with its first alpha expected “early Q4 2019” for high-end backers (apparently that’s now drifted to December).

In any case, if you didn’t see any red flags before, you can’t miss them waving now. YouTuber Cryy put out a massive video and document outlining alleged misconduct on the part of Ready-Up Studios toward Ocean Spark Studios, the team Ready-Up was apparently outsourcing art work to. Not only does the UK-based Ocean Spark claim that Ready-Up had failed to pay nearly $5000 US for those services, putting Ocean Spark in serious financial jeopardy, but the art studio alleges that the Oath studio is simply “incapable of creating the game” pitched on Kickstarter and promised to backers.

“Below is the evidence we would like to put forward publicly for the reasons we believe the team at Ready-Up studios (who are currently creating OATH) are, in our opinion, incapable of creating the game they are promising to backers, unprofessional in the way they conduct themselves and their business, wasteful with kickstarter backers money and ultimately, we believe, lying to their community and refusing to pay the hard working developers that have been trying to create this game (this doesn’t include just us). They are also censoring messages that discord users and project backers are writing in the OATH discord, calling it ‘drama’ when these people are simply wanting to ask questions to the team at Ready-Up that they should have answers for, given that they are using these people’s money. As it stands, Ready-Up studios owe us £4000 GBP for the work carried out during the month of September, we have asked professionally and repeatedly to be paid, and as you will see below, we have been met with a variety of several different excuses. The purpose of us releasing this information is to allow Kickstarter backers to form their own opinions about the team behind OATH and the game itself, as we know that there are a lot of people worried about how this game is progressing and the quality of the product that OATH are going to deliver, it is also, hopefully, a source of information/ a story that other small, hard-working developers such as ourselves may be able to learn from so that they may never have to face a situation such as this one.”

Ocean Spark developers interviewed by Cryy can be heard on the video expressing absolute shock that Ready-Up’s foggy instructions to the art team demonstrated Ready-Up had no idea how to build the MMORPG it had Kickstarted; Ocean Spark devs even cast doubt on the legitimacy of the project and wonder at one point whether they were dealing with a teenager. 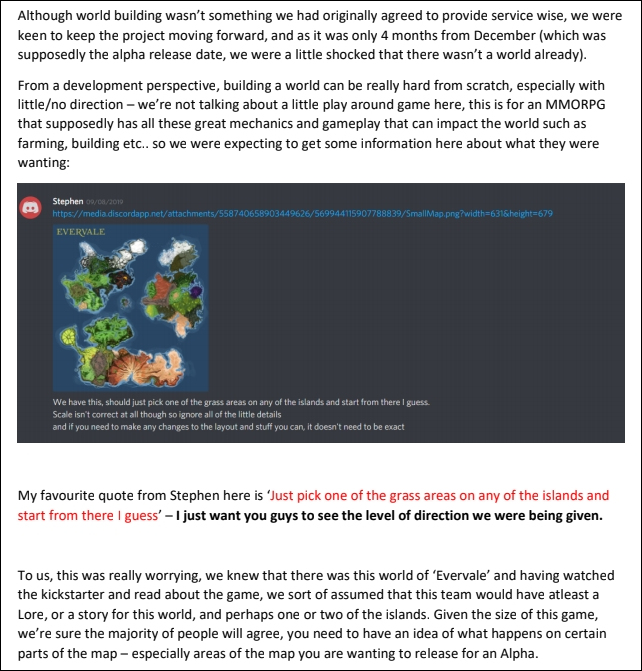 Ready-Up hasn’t issued a formal statement, but from Discord conversations in Ocean Spark’s document, it seems that after not paying the studio for its work in September, Ready-Up accused Ocean Spark of breaching its contract in October – essentially over the fact that Ocean Spark had mistakenly included a blade of grass from an asset pack in a commit.

Oath’s Discord seems to be locked down as we type this, while the Kickstarter has seen a only peppering of “scam” complaints. Redditors have noted that Ready-Up seems to be a subsidiary of Extrinsic Studios, which is known for is work on private rogue servers.

We’ve included Cryy’s whole video below, and yes, it’s super long, but it’s worth it as he speaks to multiple members of the Ocean Spark Studios team as they explain the whole story.