You know, I am regularly sitting in a waiting room for my turn to be called back to the doctor or at the lube shop to get my car serviced (don’t get those mixed up!), and I just want to pull up a game really quickly. I’ve thought about installing many of the other mobile games, but none of them scratch the right itches. My mind keeps wandering to a place where I can play Albion Online on my phone – which I’ve tried to install and failed.

Well when I heard the news this past week that Albion has hired a new developer to manage the mobile clients, I was stoked. The plan is to not only improve the interface and overall usability but also to bring the game to the Google Play and Apple App Stores.

This is a real boon to the game. It shows that Sandbox Interactive is taking its mobile intentions to the next level. It isn’t just hand waving anymore; it is showing us a commitment to mobile. And for Albion, this is a great idea.

I have continued to dip my toes into Albion on and off since it released as a free-to-play title on Steam earlier this year. I wrote about my impressions at the time, which were largely positive. The game continues to improve and impress me too. But something about it just doesn’t have that sticky factor for me, or at least not yet.

Every time I play, I remember just how much I enjoy playing. The depth and breadth of playstyles is fantastic. But something about it doesn’t catch me. I never feel as if my character is an extension of me in a virtual world. I think it’s partly because I didn’t play a lot of isometric style games growing up.

But it could also be a result of the limited number of skills the player has available at a single time. While the game has a very good skill system where you can customize your build to your desired play style, you get only a handful of skills at your fingertips at one time. This isn’t a bad thing, but for an MMO on my PC, it doesn’t hold me.

However, while both these features hold me back from playing more on PC, they might be exactly what I want for a mobile MMO.

I described the graphics before as reminiscent of Warcraft 3. Look at those godlike abs. 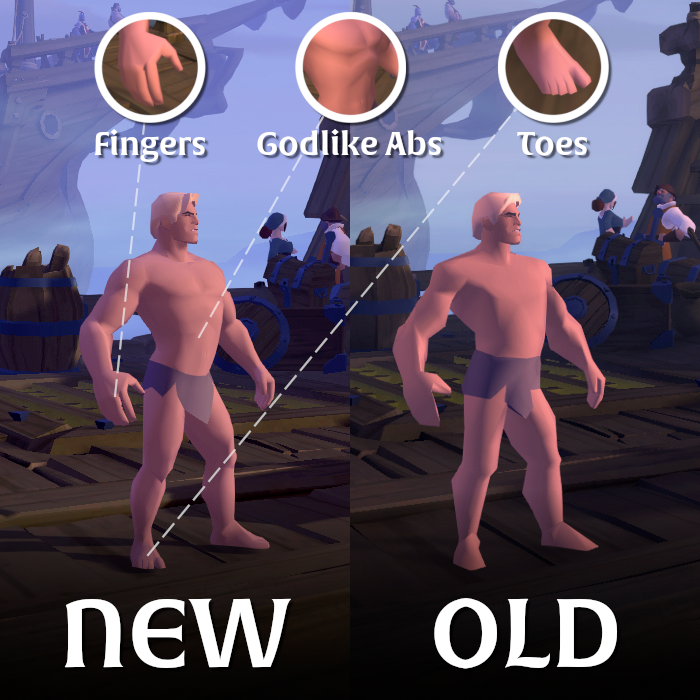 I’m not saying that the game is ugly by any means, but there is a huge difference between Albion and games like Black Desert or even Guild Wars 2. And while better graphics are always better, I don’t necessarily need or want that for playing on my phone (the battery life – think of the batteries!). When I think of a game to play on mobile, I want it to be something I can pick up quick, then run around and achieve some tasks, and then turn off. Albion can fill that role perfectly.

Click-to-move is also great for mobile. It feels a little clunky to me on a PC but I think it would work really well on a touch screen. And since you don’t have a gigantic rolodex (that’s right, a rolodex, look it up kids) of skills to manage while you are roaming the lands, combat wouldn’t be a challenge.

Albion Online has micro tasks that are perfect for mobile

The sheer number of things that you can do in Albion is almost overwhelming. From the crafting expertise to the gathering or combat, there’s so much that a player can do. And since Albion rewards you for playing, and doing whatever tasks it is you choose to do, it just lends itself so well to the quick gameplay that I want on mobile.

Pop in, run around and gather some herbs, chop some trees: It racks up experience and improves my proficiency with those skills. I have only 10 minutes? Well, that’s about how long it’ll take me to run back over to that city so I can put in some sell orders. The more and more I think about it, the more I want to be playing Albion – just on my phone.

There are plenty of mobile MMOs already, but Albion’s depth pulls at me

I realize that Albion would be far from the only mobile MMO. AdventureQuest 3D is very tempting. Also the upcoming release of Black Desert Mobile looks impressive. And I’m not even mentioning here the dozens and dozens of pay-to-win games on offer. But I just don’t think I want to play something on mobile that I feel should be played on a PC. It is actually kind of funny when you think about it: The thing that keeps me from latching onto Albion on PC is the thing that makes me want to play it on mobile.

I’ve also played a bunch of the not-so-massively type of mobile titles. Pokemon Go and Harry Potter: Wizards Unite both caught my attention momentarily. However, the lack of interaction between players kept them from becoming regular go-to-games for me. I played Clash of Clans religiously for a few years back when it was the new hotness too. However, after you’ve played it for so long, everything begins to seem pointless and vapid. Who cares if someone attacks while I’m offline? It doesn’t really destroy my town. I’m not really interacting with other players. Alas, another game gets uninstalled.

However, Albion Online isn’t like that. It is constantly teasing me to play more, showing me all the features I could be enjoying – grand team fights, owning a little plot of land, killing time while gathering resources. It is such a deep and well developed MMMO that I want to be playing more, and I think mobile is the way to get me in there.

Have you played a mobile MMO that you think has true potential for greatness? Have you tried to play (and succeeded in installing) Albion Online on your phone? If Albion came to the Google Play and Apple App Stores and were easy to install, would you give it a shot? Do you agree that Albion Online could be the perfect mobile title, or are you just negative about everything?

OK so how tf did you compare AQ3D to Albion Online?? It’s like comparing dead leaves to a car. “Adventure Quest 3D is very tempting” HOW? The game has no content (when it does new releases you beat it in 30-60 minutes) and nothing to keep a gamer playing it (replay value, none).
Also, when is the last time you actually played AO on mobile???
And why still even promote AQ3D? Most lackluster MMO in beta. This is the only site that keeps beating a dead horse. Facts.

Let’s break it down, I think this may have been a 2 ships passing in the night situation.

OK so how tf did you compare AQ3D to Albion Online??

So, I didn’t really make a comparison, other than they both have mobile clients.

Also, when is the last time you actually played AO on mobile???

Never, I meant to imply that at the beginning when I wrote, “My mind keeps wandering to a place where I can play Albion Online on my phone – which I’ve tried to install and failed.” So, I’d like to have played it mobile, but it wouldn’t install on my phone, I don’t know why.

And why still even promote AQ3D?

I don’t think I promoted it. The one sentence you quoted is literally the only thing I said about AQ3D. Is that promotion?

Was there anything about the column you agreed with? Are there any mobile MMOs you like?

Try Adventurequest 3D good game and can be played on PC and phine with same character.

How much have the “market forces” changed in these short past 14 months? o.O

Sam, I think you might be the only person in the room who doesn’t know Albion was always supposed to be a mobile game.

I didn’t mean to sound like it wasn’t supposed to be a mobile game. Looking at the current game and it’s availability, I’d say it would be fair to think that Sandbox had decided to sideline the whole mobile concept all together. In fact, miol above linked a post where they indicated they were moving away from mobile.

Their recent hire shows they are going to take it at least somewhat seriously again. I was just highlighting a few aspects of the game that many people who don’t follow Albion that closely should know make the game a good candidate for mobile. So they’d realize it’s different from say BDO mobile or Ragnarok or others.