SuperData’s September 2019 global revenue report on the video game industry is out today, and unlike reports a lot of months, this one’s got a couple of shake-ups.

First, MMO fans are going to notice that World of Warcraft (West) has dropped from third to sixth on the PC revenue charts. No, this has nothing to do with the ongoing Blizzard boycott; we’re unlikely to see any effects from that until at least SuperData’s December report. Instead, we’re simply seeing WoW return to roughly where it was before August’s huge WoW Classic spike, though it was maybe a bit faster than some people expected it to drop.

Perhaps more surprisingly, Fortnite has also dropped several places on PC, and Borderlands 3 pushed League of Legends down a peg too. Fortnite likewise dropped from first to seventh place on the console charts, while the popular-in-China Fate/Grand Order bumped Pokemon Go from king of mobile.

“Fortnite hits lowest point since launch just before Fortnite Chapter 2,” SuperData says. “We estimate Fortnite revenue across all platforms declined 43% month-over-month in September, marking the worst performing month of revenue since November 2017.” Part of that is that people just didn’t spend as much in games in September as usual.

“Worldwide digital spending declines 1% to $8.9 billion in September. Total spend on console and PC declined 17% and 3% year-over-year respectively, despite a slew of new launches. This more than offset a 6% increase on mobile, which increased its share of the total market to 59% this month.” 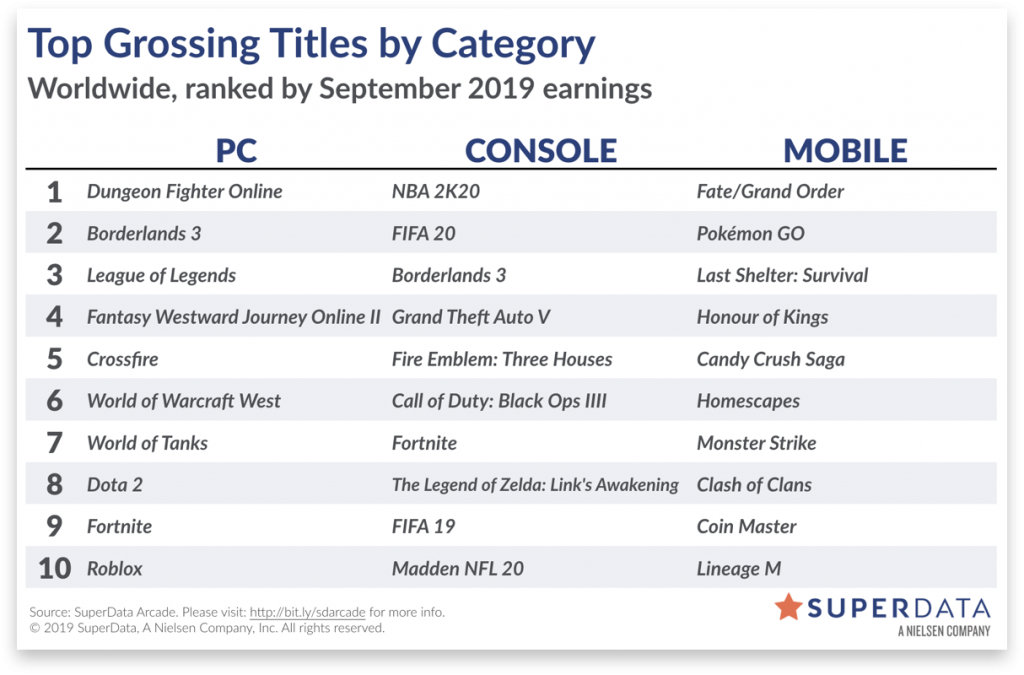