One of the most difficult things I’ve had to deal with in my time with Black Desert is sailing and boating. I’ve never been an economically focused player, I don’t play markets, and I rarely do any sort of crafting and gathering in any game. That gameplay style was never really up my galley. For me, I ended up getting my free boat from Shakatu seals, a special currency players collect from login rewards and other special events. Even though it didn’t take much money on my end, had I decided to actually build the boat, it would’ve taken quite a bit of effort. It wasn’t too solo friendly either, being helmsman, plus the cannon guy was clunky and difficult.

END_OF_DOCUMENT_TOKEN_TO_BE_REPLACED
This all changes with the Great Expedition update, which is live today for the sprawling MMORPG. During a MassivelyOP Podcast I joined in on a few months back, I didn’t really know what to expect from this content and didn’t have much to say about it. But this month, Pearl Abyss and Kakao gave me an advance look at the expansion, and I’m happy to report that this is going to be a fantastic addition to the Black Desert I already know and love.

With this expansion, boats have never been easier to earn. The new questline gives you a basic boat that isn’t a raft, meaning players can get right into the content much sooner than before. When it comes to Black Desert, one of the best ways to get more players playing is increasing accessibility. That’s exactly what I experienced with this addition. Getting more players in a boat and out in the water is exactly what’s needed to help continue grow the game’s economy – and its playerbase. Who doesn’t like boats?! 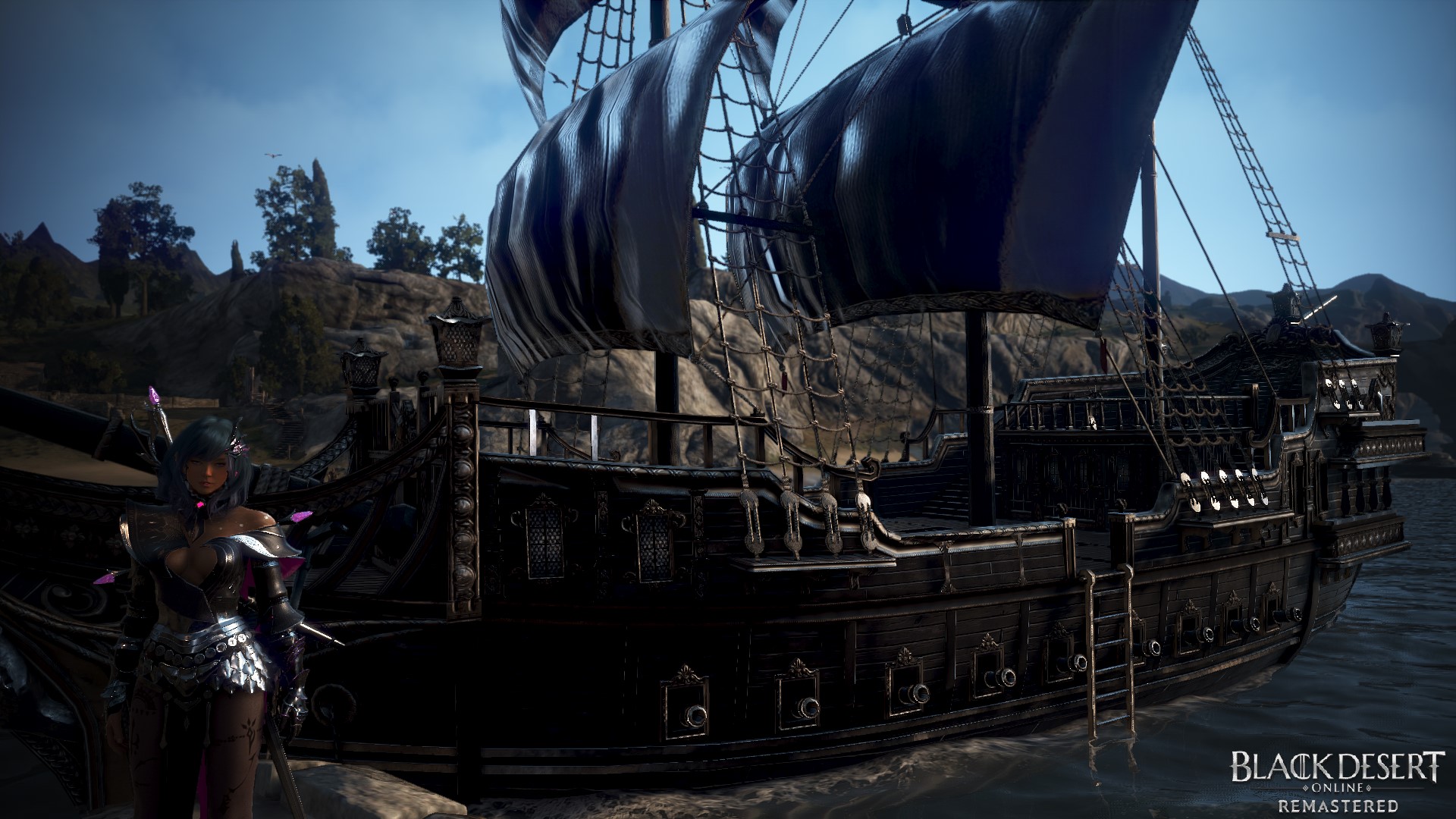 It all starts with a Bartalli boat: a boat players can get buying from a tavern owner in Velia. I also got a boat from the quest chain, but I’m not sure if that boat can be upgraded. Players can then upgrade that boat to either an Epheria frigate (a boat for battle) or an Epheria sailboat (a boat for sailing and trade). They can later upgrade their sailboat to an Epheria Caraval, while the Epheria frigate upgrades to the Galleass. At the top of the upgrade trees are the Epheria Carraks. They come in four flavors, two for each. The caraval variant turns into either advanced or balanced, while the galleass upgrades to valor and volante. No matter which path you choose to build your ship, it’ll be a titanic venture to undertake.

As a more combat-focused player, I took the Carrack Volante for spin. These boats are big, and I found it easy to get lost in the romance of a lone sailor braving the great blue sea.

The overhaul to navigating in your boat is immediately apparent. Your movement keys allow you to move forward, astern, and leeward and windward. (I’m pretty sure I used at least two of those terms incorrectly. Sailors, feel free to school me.) Before, wind and current didn’t play any role in your speed; now they do. The new HUD tracks wind and current direction as well as strength. So if you’re sailing against the current, expect a slower boat.

One thing I appreciated was the change to ship combat. Before this update, players had to manually control the ship cannon. This was a pain when sailing alone, as players had to stop their boat and aim their shots. Now, the left and right mouse buttons fire the port and starboard cannons respectively. For me, this made combat in the open seas way more engaging. I could now sail confidently, knowing that I can at least stand a fighting chance against any monsters.

Of course, you won’t be alone on this venture. You’ll have your crew. Any good adventure story needs a crew and you get that too. At first, players can recruit only one seaman, but after a few quests, I got one more spot. Players recruit members from the local tavern. As of this writing, I was able to recruit crewmembers only from Velia, but the NPCs mentioned that they can be recruited in Epheria, another port town.

The crew provide stat boosts to your ship along with the ability to find treasure while out sailing. Like your workers on land, your crew will need to be fed and taken care of, so make sure to bring fruits to prevent scurvy. It was kind of disappointing that you don’t actually see your crew walking around the boat, but fingers crossed Pearl Abyss adds that soon.

I also had a chance to try out the bartering system, but I couldn’t get too far in during the preview. Bartering is different from trading in that bartering will not level up your trading skill. Every game day, each of the islands will ask for a different item. It usually begins with a crafting material.

In my case, I couldn’t even start because I needed 584 bags of muddy water. I didn’t have that available. But the person asking for it was on an island about five minutes away, and he was going to trade me three navel rations. I would have then traded those navel rations for an urchin spine. The urchin spine would be traded for a pirate key (which was apparently 1000 lbs), which can then be traded for Azure quartz, which would have been traded for the ultimate prize, 75 sea coins. The sea coins would be used to buy special materials to enchant my boat.

Alas, this expansion has its issues too. In fact, my major technical issue makes me feel a little crabby. My boats often get stuck! Sometimes the boat is so big it clips into a wharf or the ground and it gets stuck. Other times, I’m literally in the middle of the ocean and am just unable to move my boat. This was the most frustrating part for me as I found the seafaring incredibly immersive otherwise. To “unstick” the boat, I had to jump overboard, swim far enough so that it could be “summoned” to my location, and hope that I moved the boat just enough to free it from whatever’s holding it down. I really hope Pearl Abyss fixes this because I know many players will knot enjoy this bug.

Overall, I’m excited to see this update launching and getting to the playerbase today, so man those harpoons and ready your fishing rods ready because it’s most certainly the season.

Reader
Papa “The Hunter of London” 17

Who do you speak with? I spoke to everyone and I didn’t get an option to buy anything.

Gotta be honest, this is not what I was hoping for. Feel like it really invalidates a lot of the progression I’ve put into my sailboat and frigate, as well as makes my trading levels pretty irrelevant.

I was really looking forward to a wider ocean, and expected some mechanical evolutions, but this feels like a full replacement of stuff I’d put quite a bit of silver and time into, without meaningfully adding to actual content.

Maybe I’m not quite understanding what’s in this expansion, but what I see looks to have turned something I was interested in into something that makes me wonder if this is my jumping off point. I really don’t feel like getting into a ship upgrade grind

Anything for a group of people to do on boats now, or is this targeted at solo players again?

On the one hand I’m a super huge fan of things to work on. I have a Peridot Wagon I never use. I have an Epheria Sailboat and Frigate I never use. Building them was fun.

However the new system for upgrading boats looks anything but fun. Beyond the basic “improved” versions of the Epheria Sailboat/Frigate things start to get pretty stupid pretty quickly. From obscure, random materials that have no consistent demand to yet another new form of enhancing method/materials (Verdant Blackstones) to improve gear only available by turning in Tier 1 bartered items that are simultaneously needed to unlock more barters. Trying to convince myself to get into all this but honestly seems like a huge waste of time.

I don’t mind needing to maintain a boat (everyone knows that IRL a fishing boat is a hole in the water you try to fill with money) but IIRC the decay rate back when I played at the start was reputed to be silly-fast. And you COULDN’T repair it – its eventual demise was inevitable, no matter what you did.

I don’t know about the new Cog – but the Epheria Sailboat, Frigate, and all the ships you upgrade those to are permanent vessels. You restore them at wharves, or using consumables – but if you run out, they just get very slow, and if destroyed, they’re recoverable (sans tradegoods) at the closest port.

My Epheria Sailboat is repairable. The Cog that they gave out has that silly degradation. The cog is VERY fast, but you can only use it for a few hours at best. I really wish they had just made it able to be used for a week and then expiring. All the buildable bigger and new ships are repairable.

I have gotten my cog stuck 3 times so far. I’d really like it if not for that. I think they should have offered an avenue involving CP for getting sailors as opposed to cash shop only. I’m not surprised, just disgruntled they keep going back to the well on stuff like this. We can get workers for CP. It should have been this way for crew out of the box so to speak.

I’m the same as you on the ship building stuff. I got my Sailboat via coins as well. I’ll look into upgrading, but as long as getting stuck is an issue, I’ll stay on the land. Just not worth the headache of reloading and hoping my ship isn’t stuck.

I asked about it and the method I described is actually the method they recommended to fix it. I figure this’ll be something they can fix later with bugfixes. Right now, going back to shore is something I fear. I really hope they can at least fix the main ports of the game. For me, it happened at Port Ratt and Velia.

Reader
Papa “The Hunter of London” 17

Who do you exactly speak with?

Closers’ latest character is knives out… to the max

Here’s over an hour of footage from mobile MMO Re: Tree...