We’re liveblogging from BlizzCon once again! Starting at 5:30 p.m. EDT, we’re getting the third of a total of six “coming soon” panels for this show: This one’s on World of Warcraft’s just-announced expansion, Shadowlands. Watch the stream on the BlizzCon site, and join Eliot down in the comments for live commentary on everything we’re seeing, or just check back for a full run-down at the end of this post.

It’s gonna be an interesting BlizzCon 2019, given the ongoing boycott and Hong Kong mess, but we’re covering Blizzard’s annual fan convention just the same, with liveblogs and analysis of World of Warcraft, Diablo III, Overwatch, Hearthstone, Heroes of the Storm, and beyond. Bring your popcorn!
• Not So Massively: Reflections on Blizzard, one year after the Hong Kong fiasco
• Perfect Ten: When celebs crossed paths with MMOs
• The best MassivelyOP community Daily Grinds of 2019
• The most popular MMORPG conversations of 2019
• WoW Factor: A quick glance back at 2019 for World of Warcraft
• More BlizzCon articles...

Ion Hazzikostas says Shadowlands is taking us to the realm of death, the afterlife. When someone dies, the soul crosses the veil, brought before the Arbiter. The Arbiter judges that soul in an instant, and it is sent to its destination, each realm ruled by a Covenant. Bastion looks pretty gorgeous.

Unlike Bastion, Maldraxxus is ruled by the Necrolord, the military might.

Next there’s Ardenweald, ruled by the Night Fae, the Emerald Dream’s dark mirror, A place of rest and rebirth.

So what’s a covenant? Players will be choosing which one to join, which’ll cement you to one of four narrative arcs at max level. 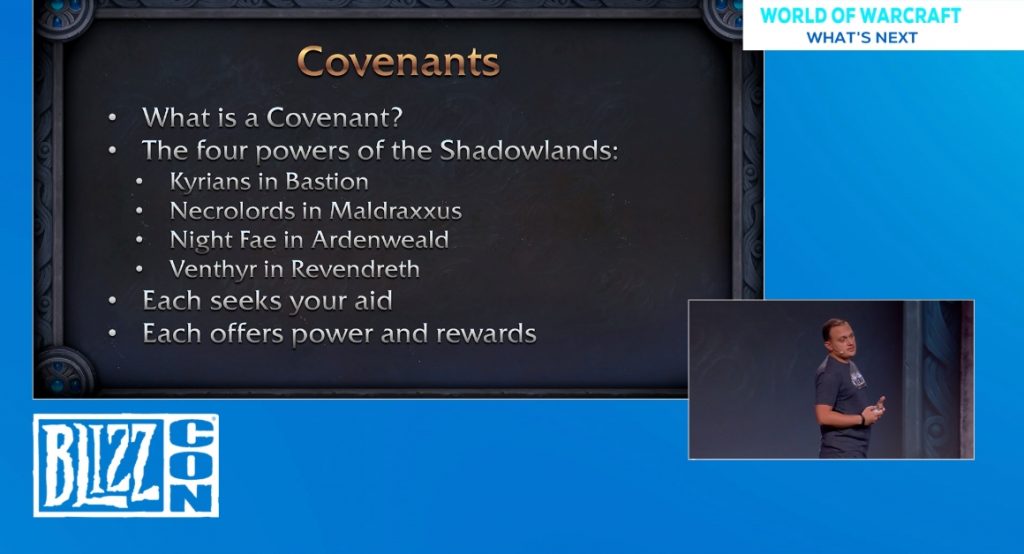 “There is no artifact power to grind.” HUGE cheers from the crowd. Hazzikostas says the team learned its lesson. 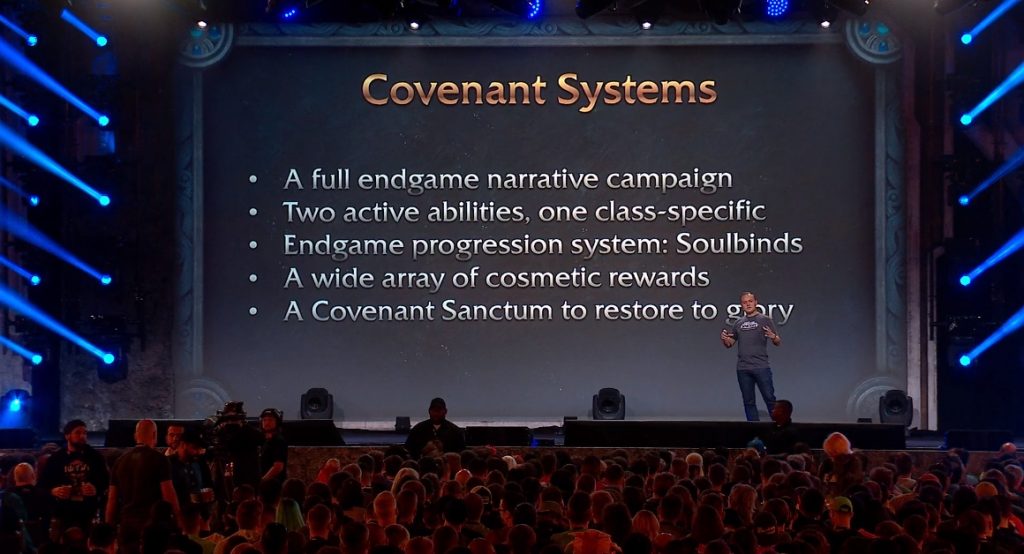 Joining a covenant will come with rewards too. 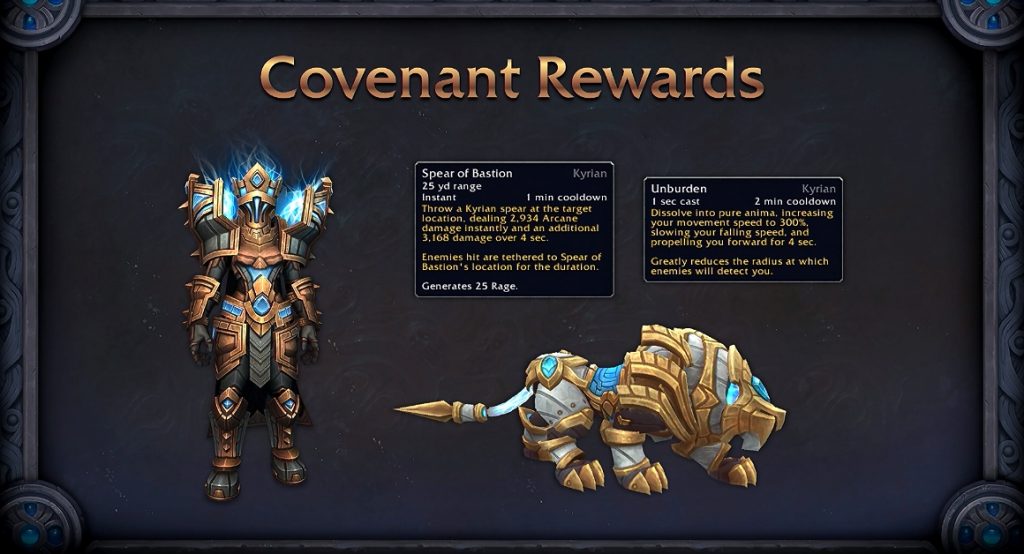 Cloaks and backpacks too. 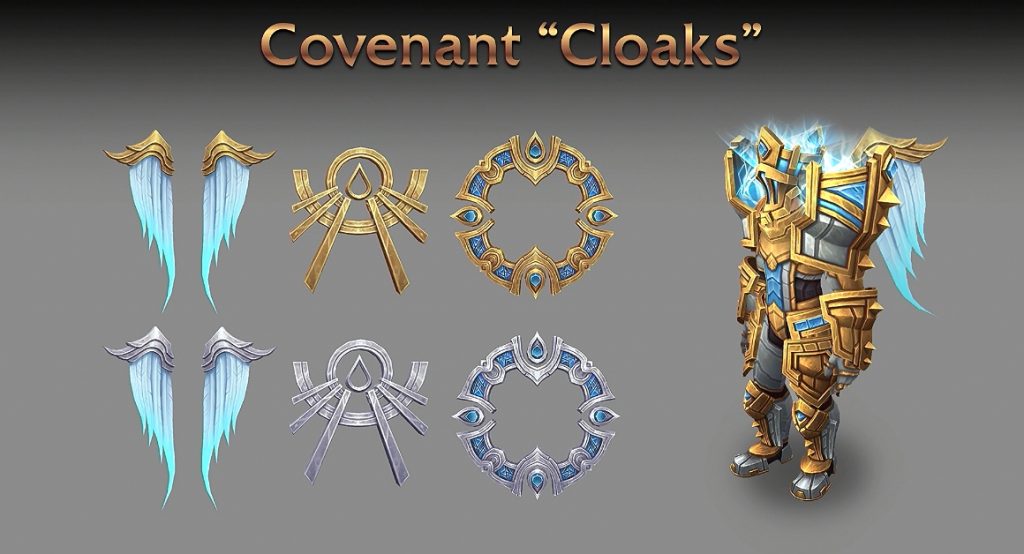 Arthas is definitely dead, by the way. It appears Sylvanas is using her partnership with the Jailer and the collection of souls in the Maw. 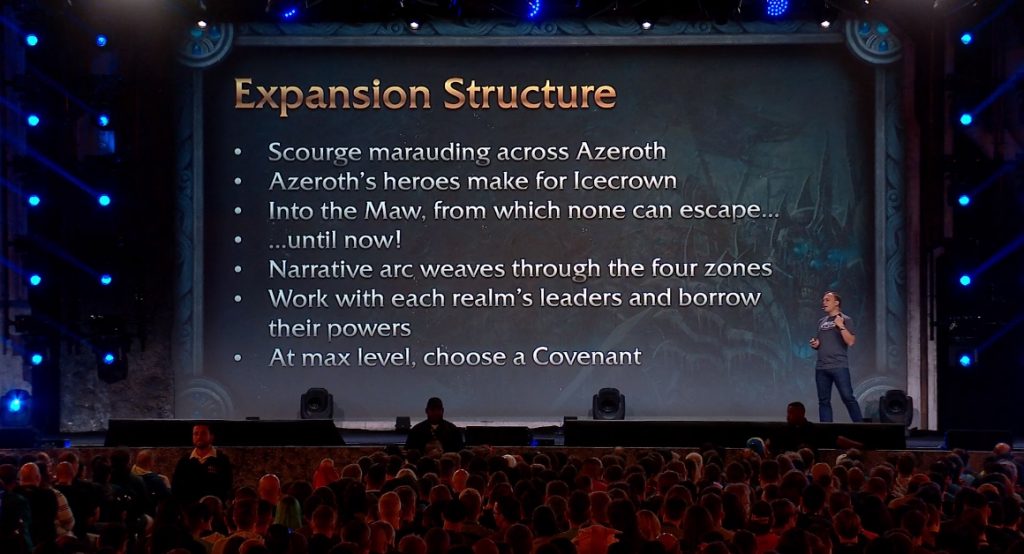 Alts are a big deal too. Playing an alt is more of a “new game+” experience; you can pick a covenant immediately. Level in any zone, do world quests, or do whatever. Earn endgame progression while you level on the alt. 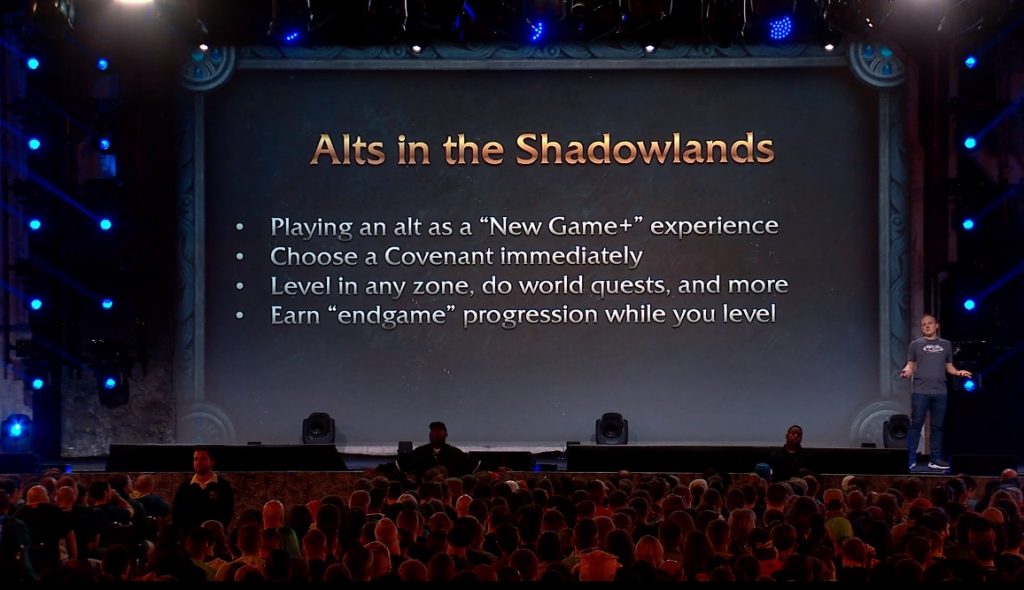 The Maw isn’t going to be like any other open world zone in the game, and Torghast, Tower of the Damned, is more like a roguelike dungeon than a WoW dungeon.

Hazzikostas goes back to the game’s newfound focus on player agency. “We want to give all of you a feel of more control over your destiny.” “What if there was some other system that just… tracked your deeds, and gave you a list of rewards, and you picked one?” Gee, we can’t imagine. Oh wait, yes we can, it was called badges.

Oh yeah, and we’re back to class identity – yes, some deleted abilities are coming back. 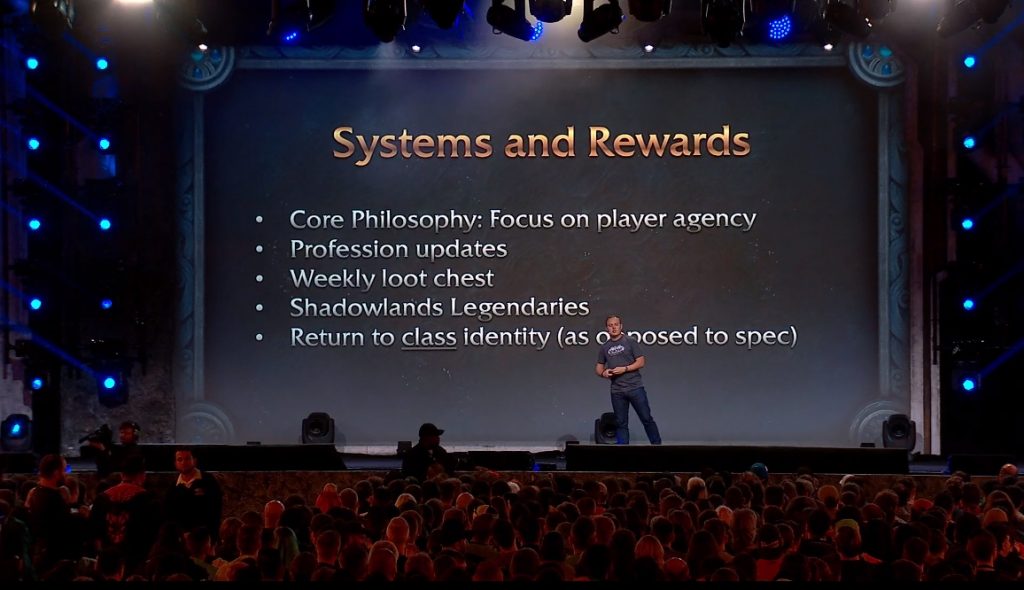 And yes, there’s going to be a level squish, so everyone’s being retooled; the new max level will be 60. What got our team hyped was allowing people to start in the existing expansions and level the whole way up – in other words, you can start in Pandaria at level 1 and go all the way to level 50 there, then go to the new expansion – basically, it’s Guild Wars 2. 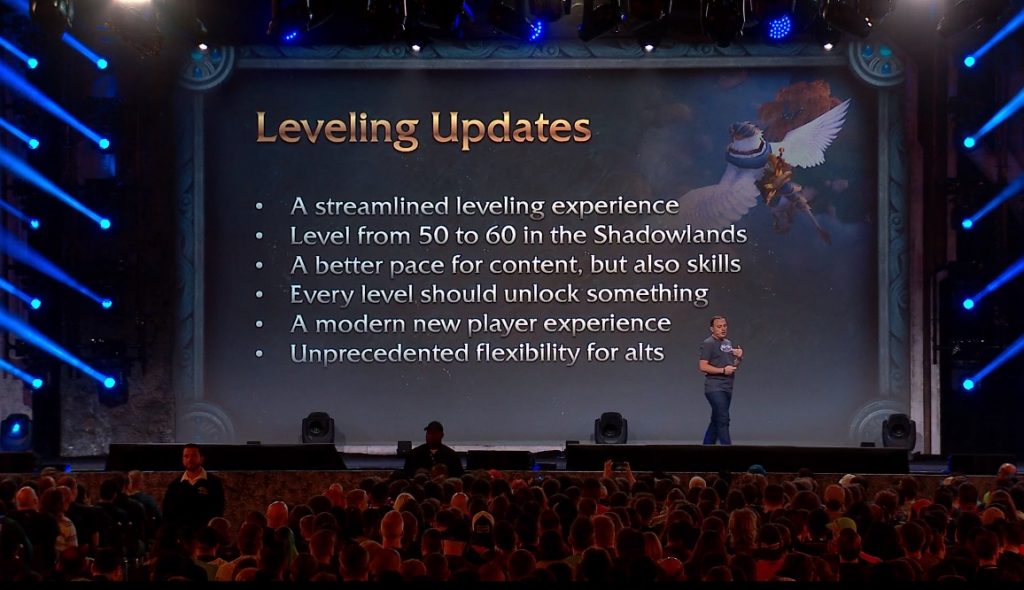 And everyone can be a deathknight. 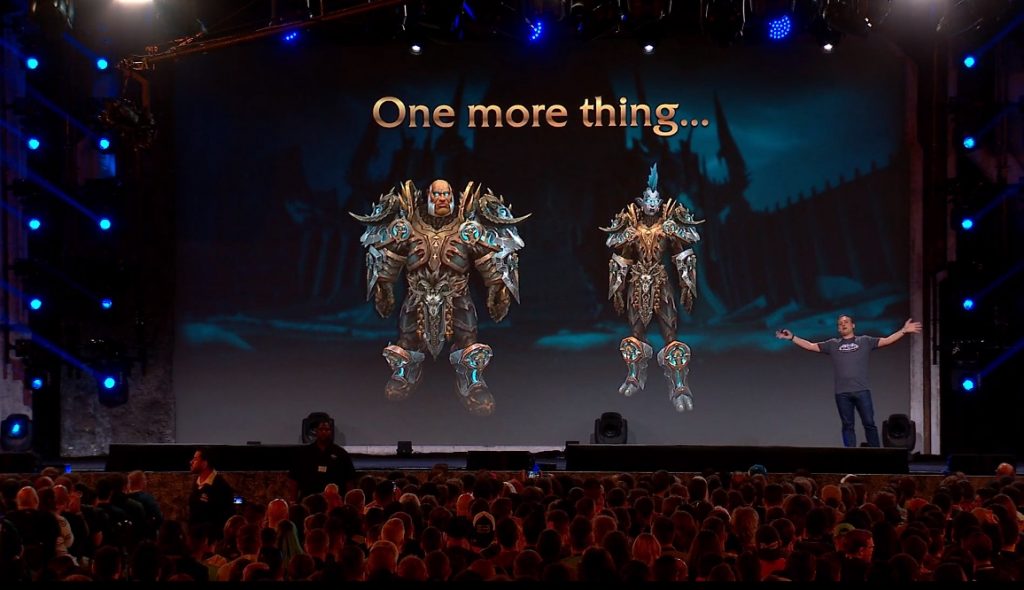 And that’s a wrap! More details down in the comments where Eliot was liveblogging. :D We’ll be liveblogging tomorrow’s panels too!