The past couple of weeks in the land of Blizzard have made for a wild ride. Some of us have extremely strong feelings and emotions regarding Blizzard and its handling of the whole Blitzchung situation (if you’re lost, here’s the rundown). However, at BlizzCon on Friday, Blizzard President J. Allen Brack apologized for the debacle – maybe, kind of, basically, or maybe not, depending on your take.

Now, whether that apology swayed you back into the arms of Blizzard or not, that’s not my business – I’m not here to judge you. What I want to touch on are some of the different PvP games you could be playing instead of Blizzard (PvP) games. This is Fight or Kite, MOP’s PvP column, after all. So whether you still #BoycottBlizzard or you just want a quick look at something else to play, let this be your guide.

Overwatch is the first-person, team-based shooter and arguably Blizzard’s biggest esports push currently. There are dozens and dozens of FPS games, but what Overwatch brought to the genre was a bit more life, character, and MMO-style classes. So, where do I see you hitting some of those same notes? 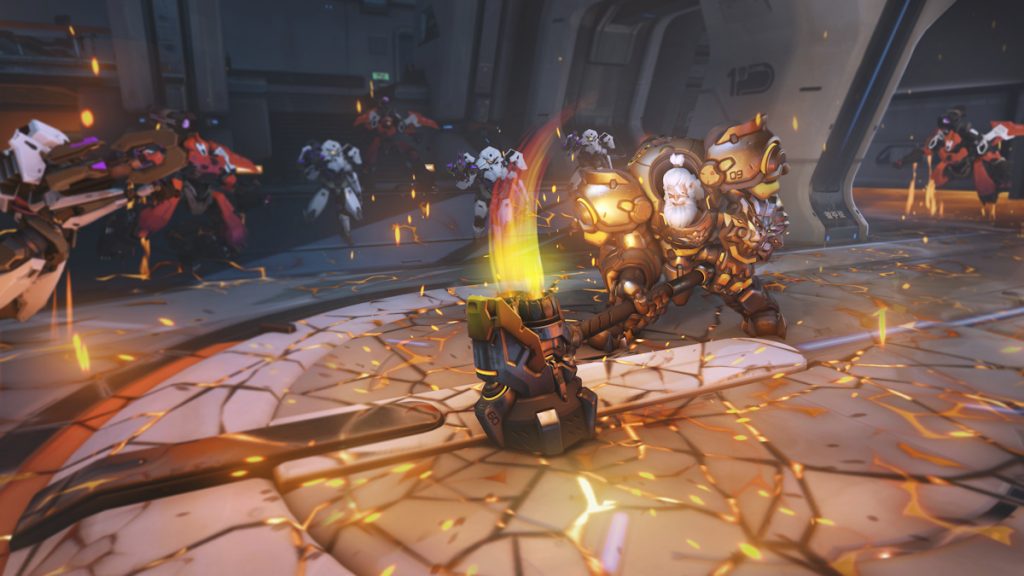 Paladins is likely the nearest game, tone- and style-wise. We have the team-based shooter aspect. You also have heroes with specific roles: DPS, support, and tank. Sure, many shooters that came before allowed players to choose to be medics and the like, but those roles were not as hard and defined as you’ll find in Overwatch and Paladins. Not to mention that both games have a fantasyish theme to them. This is your first stop post-Overwatch.

Team Fortress 2 makes for another strong contender. I realize you don’t have all your favorite fantasy magic in this older title, but the quality and tone does offer a lot. It’s a more military-unit-style shooter, but you do have character roles such as the spy and medic. Not to mention the game has been running for ages now, so there’s no worries about servers shutting down on you.

Also worth mentioning are a few battle royale games. I do understand the aversion to BRs among our audience, but if you’re seeking fast-paced, arena style battle,; you really should at least give them a glance. Fallout 76: Nuclear Winter was also lot of fun if you can look past Bethsoft’s other shenanigans. And if you absolutely must play a fantasy game, Ashes of Creation Apocalypse definitely deserves a few matches. Oh, I guess Fortnite is worth a mention too. At least Tyler thought there was some fun to be had in there – somewhere.

While it doesn’t exist yet, we did hear about the PvE modes coming to Overwatch 2. There isn’t an overabundance of info out about it yet, but, why even wait? We have plenty of looter-shooters already. Destiny 2 and Anthem don’t want to be forgotten. I also wouldn’t be surprised if Paladins began to reconsider its PvE mode now too.

If Hearthstone was your TCG boo

The card game genre has always been an interesting one to me. It seemed like Blizzard was the first team to do a digital card game right with Hearthstone (if we don’t count Solitaire). 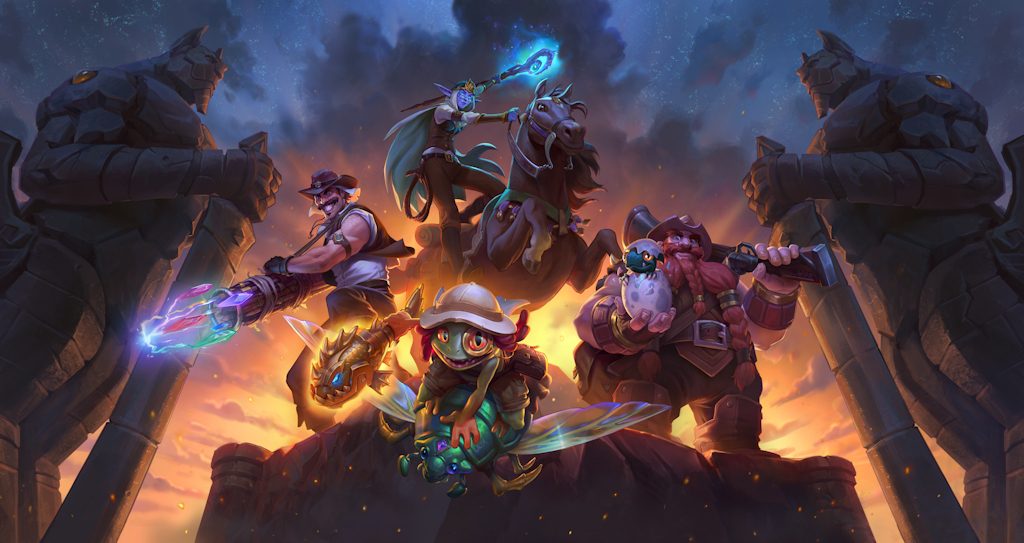 GWENT, the spin off card game from The Witcher series, should be on everyone’s radar. I played a few hands in The Witcher 3 and was totally lost, but the game itself is reportedly lovely. In addition, you can actually play it on iOS (and PC) already, with an Android version in the works. This should be your first look for a solid digital card game.

Magic: The Gathering Arena is the latest attempt at a MTG digital game. It’s one of the original, big-time one-on-one combat games in the genre. It kind of amazes me that it’s taken as long as it has to become a real, digital game. The huge issue with this one, and I imagine the primary reason most Hearthstone players couldn’t move en masse over to MTG Arena, is lack of mobile support. Supposedly, it’s in the works, but not having Android and iOS clients yet is bonkers.

Artifact, dear sweet Artifact, you’ve had a tumultuous beginning if there ever was one. From the steamworks of Valve, and based on Dota 2, this title initially gave gamers high hopes that Artifact would be the beginning of a new wave of digital card competition. That hasn’t exactly panned out. It isn’t on mobile yet either. But if you are looking for a card game equivalent to Hearthstone style-wise, you should consider it.

Finally, MTG, the card game. If you really need to get your card game fix in, get it from the real deal. There are tournaments hosted around the country. Buy some packs and start playing!

Of course, we’ve also got to address WoW. It might not be thought of first and foremost as a PvP game, but it still remains as one of the largest esports titles and one of the few in the pure MMORPG space (generating its own share of Blizzard controversy). Obviously, I’m not going to list out every MMO with PvP, but these would be my top considerations depending on your preferred mode. And if I left out your baby – please let me know!

Do note I’ve picked these specifically for their PvP in an MMO setting, not for their PvE features. (That would be a whole ‘nother piece for a different column.)

Guild Wars 2 is at the top of my list because, well, it’s my game. ArenaNet has made a ton of mistakes, especially recently, and I certainly think it’s mishandled PvP up and down, but it’s actually still good, especially for an MMO. The combat is top-notch, and the fact that you can play arena-style or even large-scale RvR is great. Let’s not forget the recent raid tournament too. If you want a broad swath of options in your MMO PvP, Guild Wars 2 is the place.

My time in Black Desert was brief, but I was extremely impressed by everything I saw and touched. Graphics were hands-down the best I’ve ever seen in an MMO. And the open-world combat felt awesome. MOP’s Carlos wrote up an amazing column detailing the game’s PvP that is a must-read. If you want smooth combat with beautiful graphics and animations, you have to be playing BDO.

I mention Archeage Unchained primarily because it is where I’m spending the majority of my gaming time right now, but also because the combat and classes are so cool. The combat isn’t as smooth and fluid as in GW2 or BDO, but it is a lot of fun. If you are looking for some larger-scale wars with faction- and guild-based battles, check it out.

I couldn’t talk MMO PvP without mentioning Crowfall too. The game is still in development, but if you can give a studio money and it can give you a game to log into and play, well, then you’re open to discussion. Crowfall continues to improve with every update too. The combat is similar to BDO, with left-click to attack, so that might turn you off if you prefer tab combat. The population isn’t huge right now either, but for anyone looking for large(ish) scale territory combat akin to RvR, Crowfall could be your jam.

If you were a Heroes of the Storm stalwart

No, I didn’t forget about you, Heroes of the Storm players. Blizzard’s MOBA might not have taken off the way some of its other titles did, but some gamers held on until now, remarkably. I realize that both of you enjoy your game, but I’m sure you’re well aware of the alternatives. (I kid, I kid.)

League of Legends is the big mama in the genre. It’s been around for years now and is the de facto MOBA. You’ve probably already played this and know in your heart of hearts that this is probably the MOBA you should be playing anyway.

Dota 2, the sequel to the original DotA and heir to the Warcraft 3 mod’s throne, was a finely crafted game, considering its humble origins. Personally, I preferred the hero style lane defender mods. Continue to be the hipster MOBA player: play Dota 2.

SMITE is the third most viable alternative to LoL and Heroes of the Storm. The most obvious difference to me is the third-person perspective of the game. So, if you wanted to get your MOBA on from a different perspective, this would be the place to play.

If you’re hunting for a StarCraft II replacement

Finally, we come to StarCraft II. There really aren’t a lot of options if you are looking for strong online RTS games right now. We even put the call out to you, our readers, to help us out in this arena, and we came up pretty short. But for completeness’ sake, I wanted to include a brief mention.

I don’t have a lot of experience with recent RTS games, but I did play my fair share of Age of Empires 2, Warcraft 3, and even Travian back in the day. I can’t say much about either of these titles, but Kingdom Under Fire 2’s launch is right around the corner – and the trailer looks cool. Travian Legends just celebrated 15 years, which has to count for something, right? If you can’t bring yourself to play StarCraft II, try these out and let me know your thoughts.

Well crew, I realize that was a pretty quick and dirty overlook at dozens of games. If you stuck with me through it, you must have a reason to #BoycottBlizzard, and I hope I was able to point you in a direction that provides the amount of fun and enjoyment you’d been having in your current Blizzard title(s) up until now.

If I missed out on your favorite game, and you think it can help others fill in the giant Blizzard-sized hole in their heart, let me know in the comments below!