Path of Exile first came onto my radar in April 2013 when I sat down with Producer Chris Wilson and Technical Director Jonathan Rogers at a teahouse in San Francisco to talk during GDC. Much has changed over the last six years since then, including its official launch on October 2013, the addition of 27 distinct leagues, and the launch on XBox One in August 2017 and on PlayStation 4 in March 2019. And now, we’ve just seen the announcement of Path of Exile 2 from ExileCon!

END_OF_DOCUMENT_TOKEN_TO_BE_REPLACED
In this anniversary period and before we delve into the future of the game at the convention, let’s take a quick look back at the growth of PoE over the years and especially since 3.0 the Fall of Oriath.

Going to the races

Before there were the leagues, Path of Exile had races. In the beginning, these events has players competing to see who could get the most experience during a specific time frame. Some races were only minutes long (12 minutes!), and others would last up to a month. As in leagues, players always started off as brand-new characters with a completely empty stash tab and had to use their knowledge of the game and skill in the game to get as far as possible. Of course, it wasn’t as easy as just going through the standard game; many leagues has special modifications meant to really challenge players. After a race, characters were mostly deleted, with the exception of characters made in the Descent, Descent: Champions, and Endless Ledge races that were sent to a Void League instead. Although those characters can’t be used again, they can live on your character select screen as a trophy and testament to your accomplishments. 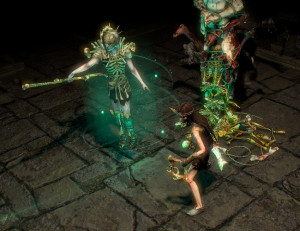 Races were grouped into seasons. When I first spoke with Wilson and Rogers back in the early days of the game, the very first season was just ending. Between February 2013 and August 2016, there were 16 different racing seasons with a total of 2,444 races run. Race Seasons 1 through 11 were just numerical designations, but the final five got names: Emberwake, Bloodgrip, Soulthirst, Winterheart, and Medallion.

An additional 46 test races were held between the first and second seasons. Our conversation at that GDC focused on what turned out to be the test races — a proposed idea where players could generate content by running their own races with special perimeters for others outside of the seasons. I have to admit, thinking back on that idea, I’d really love to try to create some myself! However, that didn’t take off, and racing itself gave way to only the leagues.

A league of its own

After race season 2, Path of Exile started creating challenge leagues. When I spoke with Wilson in 2013, he said that the future of development involved the leagues.

“We’ve identified the leagues as something the players love, something that is easy for us to work on and a lot of fun. And the other competing games just don’t have it,” he said. “This is something that helps differentiate us and almost creates an exclusive thing that the players enjoy, and that really matters to us.” 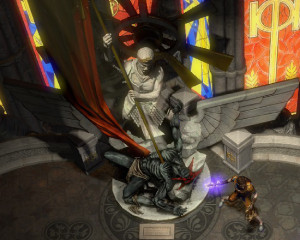 Nowadays, each new challenge league offers new gameplay mechanics, endgame encounters, new skills, and new items. Within each new league is a selection of four types players can choose to play: standard, hardcore (when a character dies it leaves the league and is transferred to standard), solo self-found (no trade or grouping) and solo self-found hardcore (a combination of both modifiers). When a league is completed, all characters are transferred to the standard base game.

The first league, Anarchy, launched in June 2013. Two more leagues followed in 2013, and 2014 had six. In 2015, the now familiar cadence of a new league happening every three months began equaling four new challenge leagues a year, with maybe a hiccup or two. Back in 2013, GGG already understood the importance of regular, frequent updates. As Wilson told me, pointing to the then weekly content patch schedule, “We found the players respond really well to frequent updates. If they’re not playing constantly, it gives them a reason check every week to see what’s changed and see how it affects their characters.” The same is true today as players anticipate the quarterly leagues and the accompanying expansions or mega expansions. Blight is the game’s 27th league, currently running until its successor begins.

Path of Exile isn’t just about leagues; it does have expansions too. But of course, GGG doesn’t leave it at that; it has regular expansions and then mega expansions that really change the game up. Since the original version, there have been two mega expansions aptly named 2.0 and 3.0, with 4.0 coming next year in the form of POE2.

Of course, lots happens in each expansion, either new content, classes, items, and skills or complete reworks of things like the mega expansions. There have also been many graphical improvements, not the least of which is incredibly improved water that now flows around items and foams as it laps on the beach.

Caught in the Acts

Path of Exile is broken into story acts. During my first interview, Rogers was talking about work on the third act of the game. Boy, so much has been added since then. The game built up to Act V and hung there for a long time, giving players the chance to rerun the Acts on harder settings. Then in one fell swoop, Acts VI though X were added together in The Fall of Oriath, or 3.0.

If you get caught in leagues remaking new characters all the time, be sure to take the time to to finish up the story of Path of Exile; it’s totally worth it!

The Fall of Oriath was the last mega-expansion to hit Path of Exile. Since its release, the game has been augmented with 190 designer-created unique items, 85 skill/support gems, 9 leagues worth of mechanics, encounters and new items, which equates to getting one new unique item every four days and one new skill/support gem every 8.85 days. Of course, every addition has to be balanced against and have their synergies and interactions considered with existing content; that means GGG had to consider and balance almost 1000 unique items, 247 active skill gems, 127 support skill gems, 19 ascendancy classes, and 150 ascendancy notable passives.

Since 3.0, PoE has released nine challenge leagues (Harbinger, Abyss, Bestiary, Incursion, Delve, Betrayal, Synthesis, Legion and Blight). The War for the Atlas expansion introduced 32 new maps, reshaped the endgame game mechanics, and added new endgame encounters. The Betrayal Expansion reworked master’s missions, tossing out all the old masters and replacing them with a host of new ones, all with their own stories.