There was no shortage of announcements and information at ExileCon 2019. Along with a deep dive into Path of Exile’s new Conquerors of the Atlas expansion, Grinding Gear Games’ Managing Director Chris Wilson offered players and press a more detailed look at the companion challenge league launching alongside it on December 13th. Like the many leagues before it, Metamorph adds an all new way to relate to the game, from a new NPC to new mechanics to new rewards.

The starring cast member of Metamorph league is Tarnay Octavious, a master alchemist trying to “fix” his past. He studied originally in Oriath and continues his studies with experiments in Wraeclast.

Octavius’ research is continuing in Wraeclast because he was banished there for killing his teacher — an act he does not appear proud of. He is driven to uncover and hopefully cure what he calls the intrinsic darkness, the thing he attributes his violent actions to. 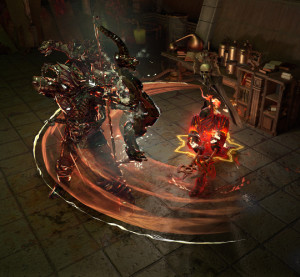 Octavius is reaching toward his goal through experimentation. The meat of the Metamorph league is taking five samples of from the corpses of creatures you defeat in a zone and using them to create a new monster. The intrinsic darkness, Octavius believes, will burst out of this new monster as it tries to kill. Create, study, destroy: Those are the steps he is taking with every bit of flesh in Wraeclast to find his solution.

On the practical side, each sample is the embodiment of one of the creatures skills, and combining all five samples together with Octavius’ help brings life to an amalgamation with each of those skills. Players will then fight this metamorph (they can create one per zone) — and what a fight it will be! As its name implies, the metamorph will indeed morph throughout the fight, changing forms and unleashing skills quickly. Wilson said, “Our boss fight designers have spent a lot of time honing the combat of these encounters to make them as challenging as possible.”

As you’d expect in Path of Exile, the more powerful the components you combine for your metamorph, the more rewarding defeating the encounter will be. Wilson explained that some samples have specific reward types on them that are added to the reward pool. At the endgame level, you collect specimens from map bosses and can combine them across many areas for very powerful metamporphs with equally impressive rewards.

What are the new metamorph league rewards? Wilson described that in this league, GGG is introducing quality levels to jewelry. A new currency item called a catalyst can be used to increase the quality of rings, amulets, and belts. More like the Blight league’s vials than other currencies, catalysts come in different types, each one granting a different kind of quality jewelry themed around categories of item mods. Wilson shared the examples of a prismatic catalyst that relates to resistances and the imbued one relates to spellcasting. In total, there are around 10 different catalysts. Adding a catalyst to the mods has a two-fold effect: the magnitude of associated mods is increased, and it helps you craft those mods onto your item using crafting currency items. Wilson noted that catalysts will be relatively rare and can drop only from metamorphs.

Of the 16 new unique items coming in the new expansion, four are exclusive to the Metamorph league. The Metamorph uniques are all themed around modifying skills in weird ways, according to Wilson. For instance, Fury Valve takes all your multiple projectiles and focuses them all into one that upon striking its target then splits back into all the original projectiles and hits all nearby enemies. That’s a different way to do an AoE!

As noted above, Metamorph launches alongside Conquerors of the Atlas on December 13th, 2019.

All this goodness will happen all over Wraeclast in Path of Exile, of course!  See you there!

Disclosure: In accordance with Massively OP’s ethics policy, we must disclose that Grinding Gear paid for our writer’s travel to and accommodation at the ExileCon event. Grinding Gear has neither requested nor been granted any control or influence over our coverage of the event.