Things have been radio silent regarding the development of MMOARPG Mad World, with the most recent news being that Netmarble will be publishing it. But what about the game devs? Where are they? That’s what one player asked and it got a response about a week-and-a-half later.

A forum post simply asks where developer responses to recent forum posts are on October 5th. On the 16th, a developer who goes by the name of Jandi_Mike had this to say in response:

“Hi, there. We are at pause with social media activities including the forum because we recently started working with Netmarble who will be the global publisher for Mad World. Once things get sorted, we will return to social media. On top of that, we will probably open a new forum in the future, run by Netmarble, so this forum will be used less and less. Hope you understand.”

This has been the only response to a number of asks from fans about where things stand with the game. Mad World’s social media has otherwise gone silent and there doesn’t appear to be any additional developer responses. Delays are not exactly new to Mad World: It announced a Steam launch that it missed, then announced that an alpha would happen as well as considered crowdfunding to fund some “improvements.”

Strangely enough, we’re running into a random automatic script that is redirecting links from the forum post or the forum itself to the game’s home page after a few seconds, so it can be hard to get to the forum post you want to see. We’ve included an image of the post below just in case the forum weirdness continues. 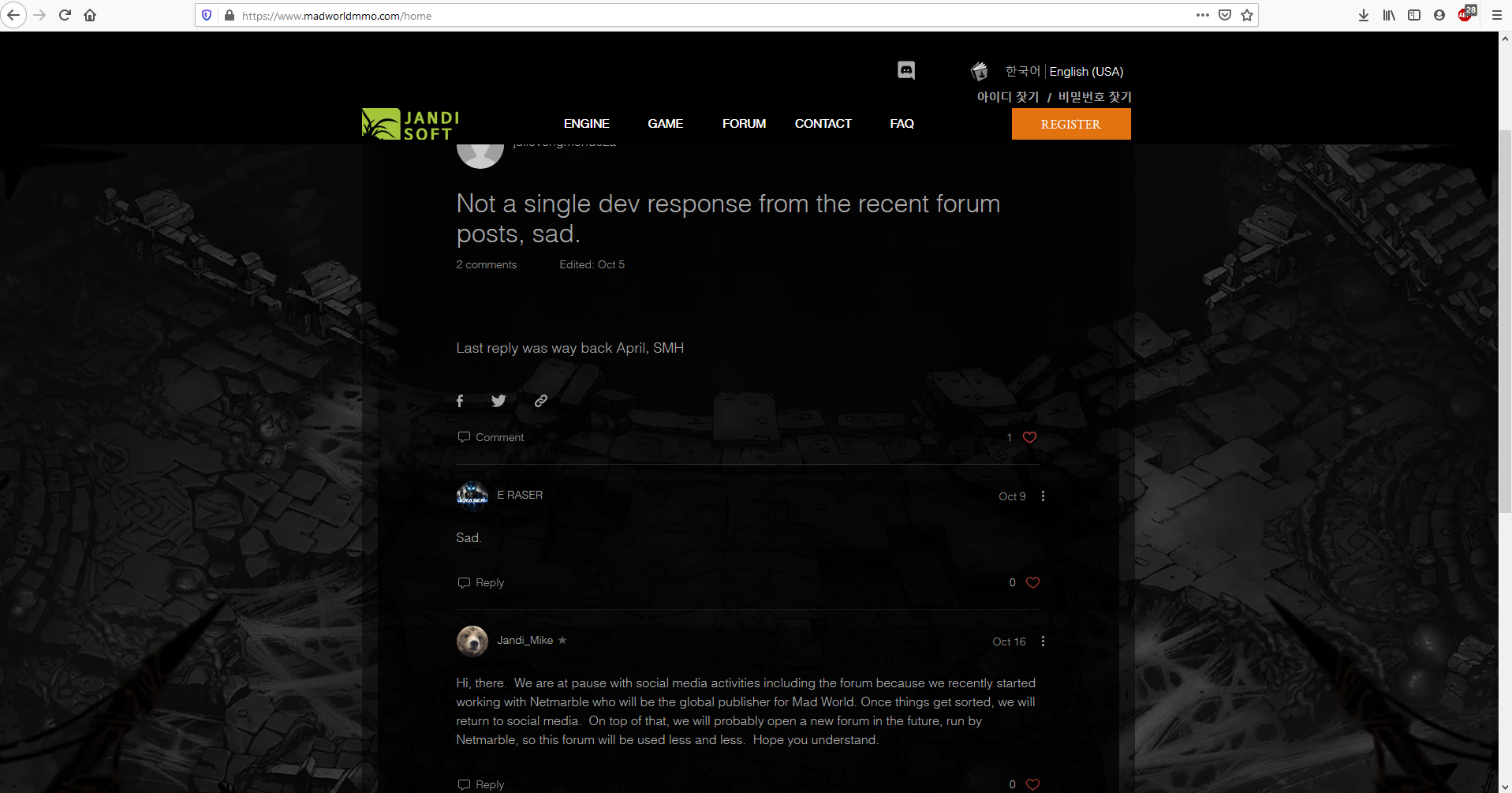 source official forums, thanks to Panagiotis for the tip!

They also have spoke in discord a decent bit. Idk about stuff related to development progress but there are signs of life if you are looking for them.

Check their facebook, there are some “updates” there. https://www.facebook.com/madworldmmo/.

I don’t think it’s being scrapped. Just like they said, everything is being transferred over to Netmarble. And Netmarble is taking its sweet time to get stuff done. It’s not a smooth transition.

The team behind it has always been slow and long between updates and news anywhere other than their own Discord channel.

It was fully playable and fairly decent the last time we had a playtest though, there is no reason it should be scrapped considering how far along it is and since Netmarble went into a deal to publish it. “No reason it should” doesn’t mean it won’t be scrapped of course :D

Now that someone else is involved (Netmarble), I’m hoping to see a PvE server come out as well. The game was open PvP with some town guards that would help those being attacked in towns. I really like the game and all, I just don’t know if I want to deal with people attacking me all the time to play it.

Hmmm.. maybe or maybe not but what we know is that the game was pure grinding Ad infinitum with mindless quests.

Social media posts are hard to do.

Damn I just did one.

Yeah, don’t go holding your breath for this one.

Path of Exile releases the full patch notes, passive tree, and item filter information for Echoes of the Atlas

Skyforge previews its PvE content on Switch ahead of launch on...