Let us face the sad, sobering truth of our MMORPG experiences today. While we may like to think that we are noble heroes saving the world from utter destruction, the truth is that we are bullies for hire, willing to wail on anything if there’s a paycheck in it. We gleefully bring entire species of creatures to extinction without a second thought, even if said creatures are adorable.

For example, Rafael here is making Arbor Day fans cry by beating up on a twig. You are all that is hero!

“I am enjoying my time in Elder Scrolls Online, although I think it may end soon,” said Rafael. “So, a weak little Spriggan, which is nothing more than a walking tree branch, approached my Sorc with bad intentions and, well, it became driftwood in the sea of dark magic. Poor little thing won’t even be used for kindling now.” 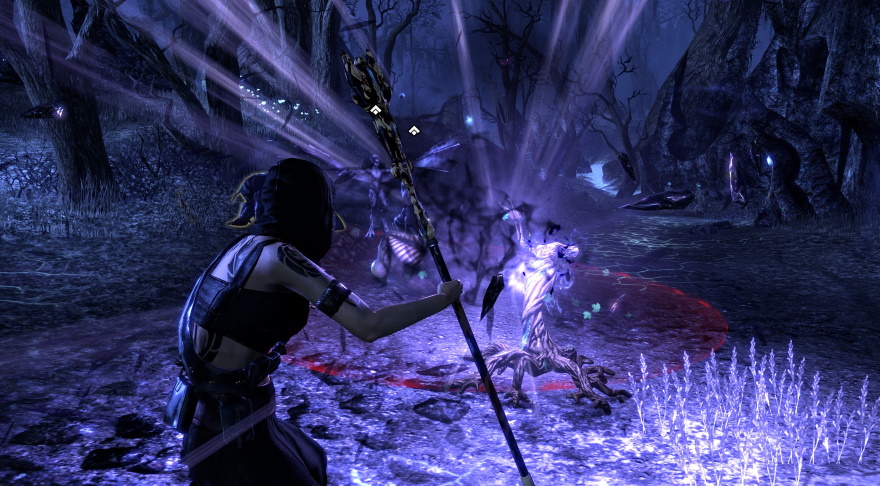 Natalyia would like to differ on this perspective: “I don’t think of it so much as ‘wailing away on an inferior opponent’ as ‘defending the weak with my well-earned might.’ Case in point – the Lynch Family Farm in Black Desert – a farm of decent, hardworking people who collect honey near Heidel is plagued by any number of evils. Among them, the dreaded Kuku Bird. What is to be done? Well, Danyica, a local Mystic of note is not too proud to defend these humble folk, from this less-than-ferocious foe. Before, and after. Farm saved, honey for everyone!”

Hey — whatever helps you sleep at night! 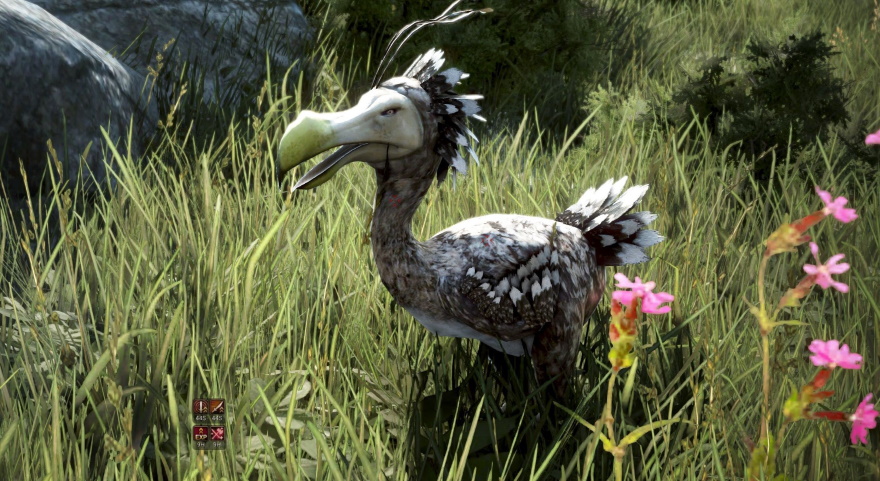 Mysecretid decided to take a trip to Dantooine in SWTOR, where an odd event took place…

“At first, the newly-returned companion, Jedi Knight Kira Carsen, was none too happy that one of the first places my character took her was a farm planet,” said Mysecretid. “Yes, the expression on her face says, ‘Don’t tell me that smell is what I think it is!’ Eventually, the two Jedi resolved their differences with a dance (or would that be a hoedown on Dantooine?) while a bemused kath hound looked on.” 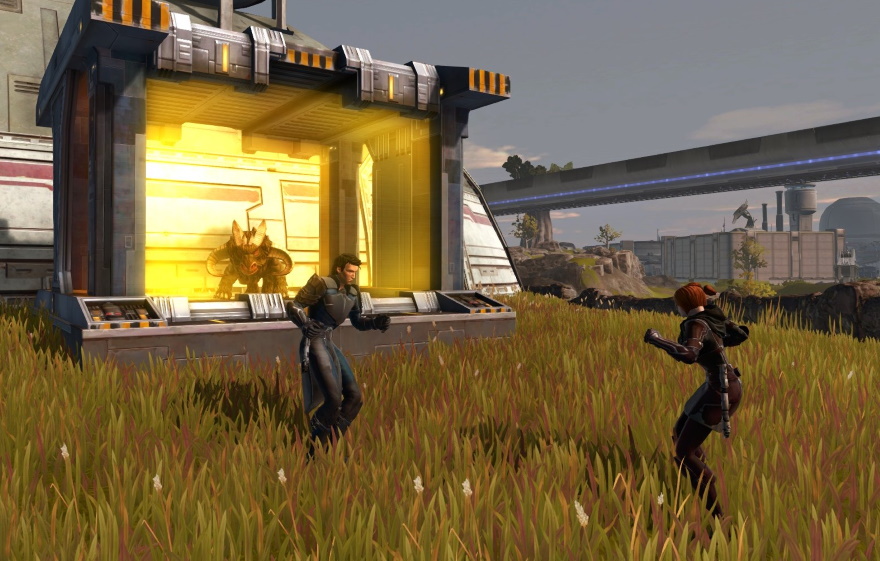 Are we ready for the Christmas season? Hikari is rocking out to the season in Guild Wars 2, brought to you by the color “blue” and the numbers “two” and “infinity.” 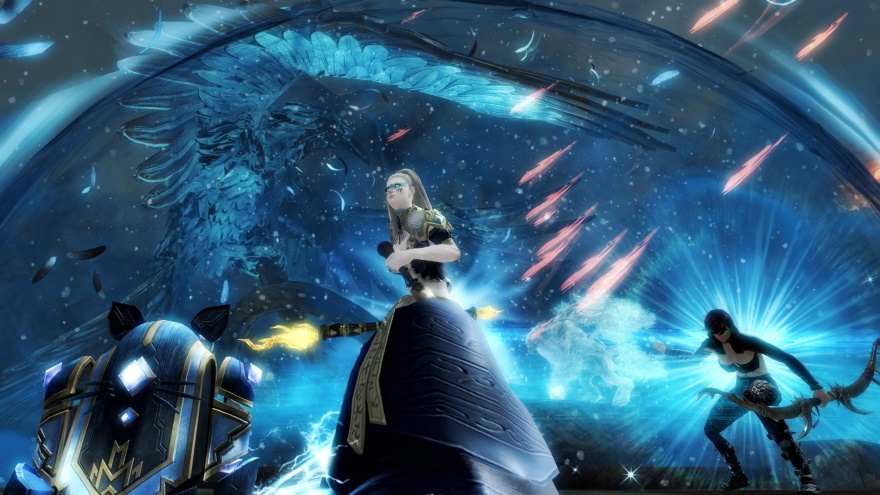 And I’m going to toss one of my own screenshots into the column this week, because I got to rub exoskeleton shoulders with a Lord of the Rings Online celebrity this week. That’s right, I got to meet Shelob! She’s really a doll and said that she hasn’t let fame go to her head. Then she bit me and laid her eggs inside my torso. 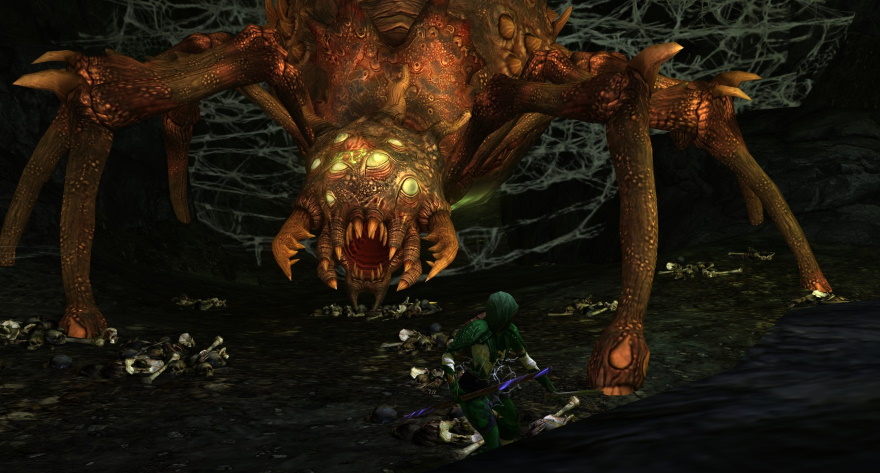 Speaking of celebrities, let’s turn this into our weekly screenshot challenge. Share a picture of you hanging out with a famous virtual celebrity — I’ll leave that up to you what “celebrity” entails!

Thank you for the feature, Justin! Kira Carsen says “Hi”. Also, she says, “Get me off this farm planet!”

Just some random barbarian I encountered once, his name was Cohan, Conen? Something like that anyway.

…not sure why that Pet Shop Boy’s track goes through the head and pigtails staring at that, but there you go. o.O

Heh. Cohan the Librarian, yes, Ryuen? He runs the scroll archive in Aquilonia? Such a nerd, that guy! :-)

What could bring the Heroic Orc Templar Oxblud and the Legndardy Redguard Swordmaster Sai Sahan together? The short answer: The Dawn of the Dragonguard event in ESO. I guess that’s also the long answer.

Sahan’s a grumpy bastard sometimes (I guess being tortured by infernals can do that to one), but he’s a fun character. Nice pic!

Which is one reason I tend to play games where I can basically be a farmer/raise animals/animal husbandry/animal taming/forage/botanize/get along with nature…(I actually had lvl 70 forestry in the game I played for a long time…meaning I could just hover trees and tell their ages multiple tiles away from me…and would spend my time replanting tree seeds to make forests…even though they technically very slowly regrew on their own…you could take a sprout from them and replant a new tree…assuming you didn’t fail and waste the seed…so it was countering the people who went through demolishing the forests to level their woodcutting…and I learned how to just hack at trees with woodcutting with a low QL axe to raise my own woodcutting but leaving them still standing and only 1 more cut left…but leave them..because they would eventually heal up again/not have killed the tree.)/garden/etc.

I mean, yeah, I enjoy combat here or there, but mainly when it’s NPC’s that are attempting to harm me and I’m defending myself/it’s not a person being harmed. Like a troll, or a giant scorpion or spiders. I had killed over 100 mountain lions that came down the mountain to feed upon me.

Eventually they added a feature whereby they tried to fix a problem with animal spawns by allowing predator/prey actions between the animals themselves, so you’d hear a non-hostile animal being attacked by a hostile animal, and have to run out and kill the thing killing it/save it, or just listen to it bleating until it died to the mob.

Not every person plays to ‘be a bully’. Some of us actually care about things…

Make sure that the picture is over 880px wide and comes with a description or story!

I always loved how The Secret World kept making joking reference to the fact that the player’s character never speaks. :-)

Also Jaina and Mathias sitting in a “tree”… O.o

I did get the sense that those two characters seemed to be sparking on each other, before I left during BfA …

Still hanging out in KUF2 participating in massive battles.

As for a celeb, here is a shot from MxO of my toon with Niobe.

Or maybe you prefer Darth Malgus about to get a whoopin’?

I’m actually quite happy Malgus has returned to us. A game like SWTOR benefits from an “iconic badguy” who’s more than just another raid boss to defeat.

Also, the use of Lord Savik in the “Onslaught” plotline was a clever choice — I too had forgotten her by the time she returned in the game.

Thanks for the pics!

Lol! That little guy in Mando was great.

Yes, Malgus should have never left to be honest. If you will remember, the real mechanic to defeat him is you had to blow him off into that chasm in his thrown room. He could easily return from that as you don’t know what happens to him on the way down. But then, the “fixed” it by nerfing the flashpoint so that you could kill him. I never understood why.

Yeah, Savik is essentially a nobody NPC. It’s the reverse of the line from M.Bison in Street Fighter.
“The day the Great Bison graced your village was the most important day of your life. For me, it was Tuesday. “

Love the caps, especially the Mando!

Let’s see, challenge wise, here I am with Ruby (of the RWBY cartoons series, on the left) in Limsa! And another one where I’m planking off the edge of the arena while the rest of my team kills Titan.

I was briefly playing this D&D Idle game, Idle Champions of the Forgotten Realms on Steam, and I really felt as if my team was made of murdering bullies.

They’d go to cut through a forest that was a slight shortcut, the inhabitants of the forest would say “You can’t go through this way.” It’s their forest, we’re the trespassers, but of course we just start to murder everybody who lives there so we can take the shortcut anyway.

Most of the game has you trespassing into others places and your team will say stuff like “They don’t look happy to see us” before they start to murder the residents. I mean, barging into where someone lives and having them not look happy seems like as good of a reason as any to start killing everybody with unhappy looks on their faces.

There are a few places you do some heroics, but a whole lot of the game you’re murdering willy nilly so that you can take shortcuts and such. It was extremely unheroic feeling to me and a bit goofy.

I stopped the moment bunnies crossed our path. I shut the game down midstream. Bunny slaughter is not allowed.

Unless they’re utterly devastating your real-life garden that you need to survive, bunnies should be hugged and petted, not slain. :-)

The Daily Grind: What MMO offered the best beta experience?