When Digital Extremes first teased Codename: Railjack back at TennoCon 2018, it was exciting to say the least. Fly through space itself in Warframe?! Oh yes! Then as we got a better look at this year’s TennoCon 2019, players could hardly wait for the multiplayer ships to become a reality. I myself could hardly wait! And now, we’ve finally got them! Well, the beginnings of them: I was able to step on board a Railjack for myself and bask in the promise of space missions with my friends. But first, I have to make one. And wow is that ever going to be a process.

END_OF_DOCUMENT_TOKEN_TO_BE_REPLACED
Even the looming cloud of grind couldn’t spoil my glee at exploring all the nooks and crannies of a friend’s already completed Railjack. Here are my first impressions along with a look at what’s in store as a start my own build.

Do the dry dock

Before you can meander wistfully on your Railjack, you first must build the dry dock. Everyone needs a place to park, right? And that will be a task in itself. After you finish that, you and any friends visiting your dojo can explore it. The dry dock itself is where the scope of the entire thing really starts to hit you. This newly built area in your clan dojo is immense! You run from end to end — and it takes a bit. And that view! You don’t have to look just up to see some space beyond a window as you do in a few garden rooms; you look out at a massive landscape below and the dark expanse of space above it that frames the entire back of the dock. It is beautiful. (And also makes me really want to go explore that planet!)

You know what else the dry dock brings to the dojo? Life. With workers milling about or attending to tasks and small hovercraft moving goods (it isn’t solid, so don’t bother jumping on it, though I bet you’ll still try!), it feels less empty even though the room itself is massive. It has to be: The center will be occupied by the ginormous Railjack once you build it.

As for the building specs, it is meant for clan members to come together and gather the materials for it. Your dojo needs some space as the dry dock takes room above and below. You also need a bunch of materials; how much of each depends on how many members are in your clan (Ghost 1-10, Shadow 11-30, Storm 31-100, Mountain 101-300, Moon 301-1,000).

Gather everything up, and voila! You can build the dock and be one step closer to your own Railjack. Even when it will take a while to make a Railjack, you’ve got a cool new area to run around in and dream of the next step in space missions.

Ship is so shiny!

Did I squeal the first time I wandered into a Railjack? Maybe. (You’d have to watch the video above to find out!) It was an experience that made me long even more for the opportunity to build and launch one myself.

Once you build your ship (or visit a friend’s dojo to see theirs), you get to board it. Yes, it is a separate instance. Yes, you have to zone in. But that doesn’t take away from the awesome. The zoning in is your Warframe torpedoing to the hatch, a very flavorful movement. And the zoning itself is pretty minimal so you aren’t waiting around on a loading screen, making the transition flow well. As soon as you are inside, there are multiple decks to explore and windows to look out of. I was disappointed that the dry dock you saw out of those massive windows was not your own but a generic one, but that makes sense since is a separate instance.

Sadly, many stations do not yet work and the ships cannot yet fly. That, however, doesn’t mean you can’t familiarize yourself with the corridors, the stations, and even the creepy cryo pod device so you won’t get lost in your own Railjack when the time to launch finally comes. How well will it work if you can’t even find the area you need to repair or the weapons you need to fire at hostiles? And this gives us time to get into some speculation about that cryo pod devise and its creepy whispering and knocks. Yeah, I can’t wait to learn more about that — which in turn makes me even look forward to the grind.

How to build a Railjack

It might have been a very good thing that I got to witness the hype for the Railjacks firsthand before I started in on building one. Going the opposite way might have dampened my enthusiasm. In my personal case, seeing a completed version of the item I want for myself gets me pumped up to get my own. This extra enthusiasm is good because getting to the point of a completed Railjack is quite a bit of time and work. As in, a whole stinking lot!

With the dry dock complete, you need to research the recipe for Cephelon Cy, the entity you will need to pilot the ship (not to mention give you the quest to find the parts to build it!). That takes the same materials as building a Cy, but in different quantities. Once the blueprint is researched, clan members need only pay the cash to purchase and use it for themselves. It takes one hour to complete the research.

Luckily, building the Cy costs the same for each individual no matter how many are in the clan. For that, you’ll need:

Next up is building the Railjack itself. After Cephelon Cy is complete, get the quest Rising Tide. This will take you to multiple planets to obtain the six parts that are needed. Of course, these parts are in disrepair, so players will have to spend resources to repair them. Lots of resources. And even new resources. There’s a breakdown for each part on the official wiki, but here are the totals of all resources needed to give you a heads up of what you’ll need: 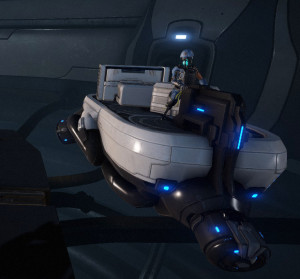 Part of that list won’t sound familiar because carbides, copernic, cuboic diodes, pustrels are all new resources introduced with the railjack system. Carbides drop when you kill Eximus on the shipyard tileset on Ceres, whereas cuboic diodes drop when you kill Eximus units on the ice planet tileset on Europa. Copernic and pustrels can be mined from red veins ore: on orb vallis for copernic, and the Plains of Eidolon for pustrels. Hint: Argon crystals decay, so be sure to gather them and then use them right away.

The six parts you will need are the gathered in the following order: fuselage (Mars), propulsion systems (Earth), port nacelle (Lua), starboard nacelle (Venus), tail section (Sedna), and the engine cowling Europa. Inside the missions, you need to defend the part until you can finally scan it, then take it back to pop in the foundry and begin repairing. Each section takes 12 hours to complete and cannot be sped up at all using platinum.

So there you have it! The condensed how-to for making a Railjack. You might want to get cracking on one, or befriend someone else who has one, so that once those big bad spaceships can be launched, you’ll be ready to fully embrace the adventures of Empyrean.