Happy fifth birthday to Elite Dangerous! The internet spaceship sandbox is marking its latest milestone with a whole lot of looking back, some warm messages from the team at Frontier Developments, and a new Community Goal for players to take part in.

The forum post talked about what has transpired in Elite Dangerous’ development over the past five years and even shared an infographic full of interesting trivia for fans which we’ve included below this post. It then offered several words of thanks from several producers, developers, and designers, and then closed out with a look at several community events.

It also announced a celebratory Community Goal in the Reorte system, where players can either turn in a variety of goods or bounty vouchers to Davies High. Taking part in this Community Goal rewards players with a bunch of credits and the Iridescent Gleam paint job for the Cobra Mk III. The event kicked off this past Thursday, December 12th, but it’s running until this coming Wednesday, December 18th, so there’s still time to get your shiny ship paint. 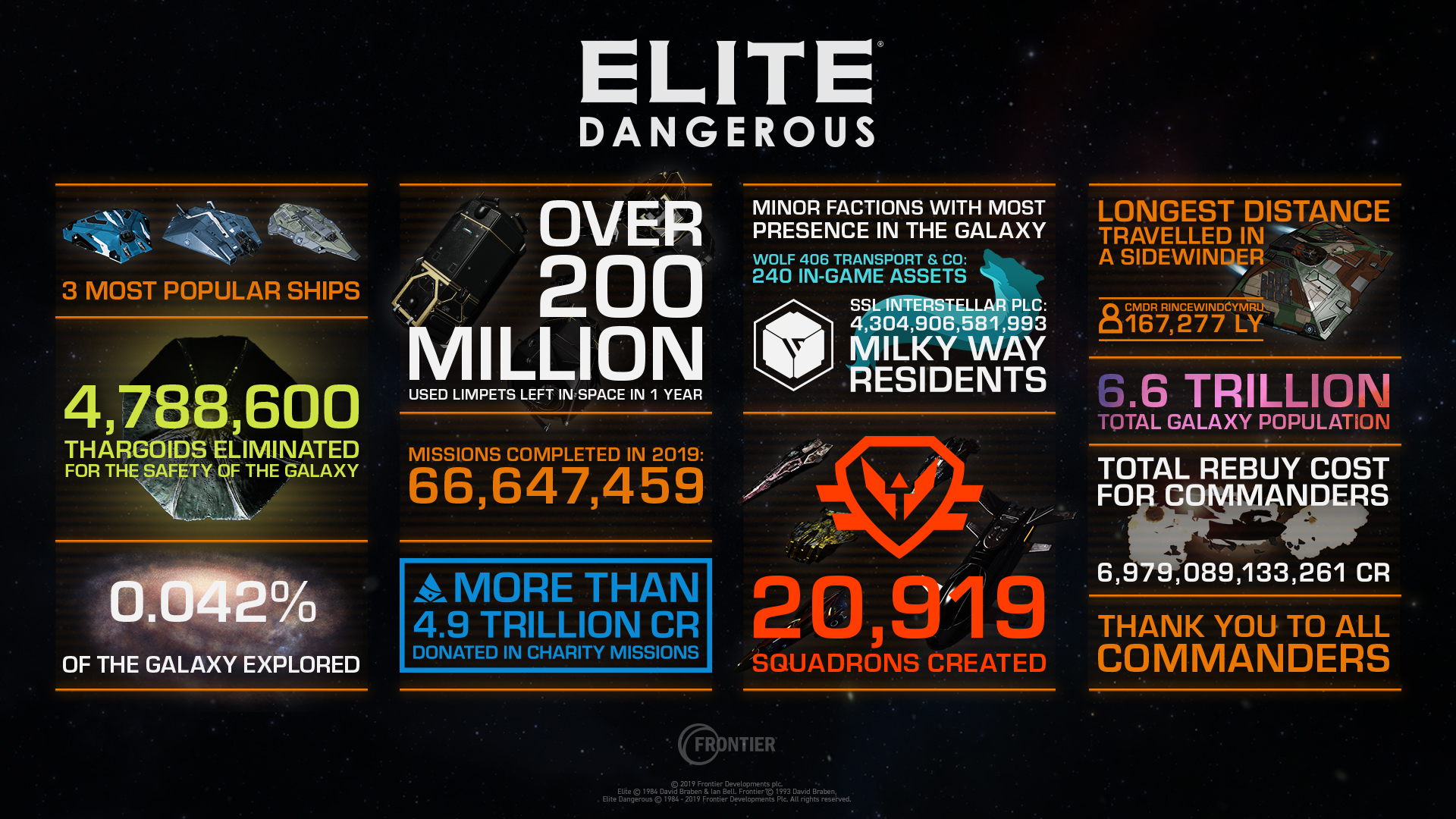 source: official forums, thanks to Cotic for the tip!
Advertisement

It’s a fun game but like all sandboxes it is severely lacking in one specific area: accessibility.

Still, I’ve been playing it this year, got a HOTAS setup just for this and it was worth it. it’s a real pleasure flying round in space using a stick and throttle, makes the combat seem much more intense and makes just flying around normally much more engaging and satisfying.

I still have no clue what power play is, I’ve never encountered a thargoid, only have a vague handle on engineering and am definitely too chicken to step into open play. But, I know how to use “road 2 riches” to make money from exploring, and I use that money to buy combat ships to have some bounty hunting fun. So far, that’s been enough for me, but I look forwards to being good enough to enter proper combat zones.

Been playing since pc beta

I have never encountered a thargoid outside of a YouTube vid. Have no idea about PP either beyond you do stuff for someone, some other folks might not like it and fight you but after much grinding you might get shiny ship stuff eventually.

I think I have a good handle on engineering but I find unlocking them and acquiring all the bits needed quite fun so I put a bit of effort into that.

I got this, tried it with mouse/keyboard, hated it.. tried it with my xbox one controller, not any better. Realized i needed a hotas to experience it right, but wasnt going to drop that kinda cash for one game.

Plus, im pretty sure that if the travel from A to B times in EvE online bored the hell out of me, that it would be a LOT worse than this game. I got better things to do with my time than sit and watch stars fly by for 30 minutes at a time. Opps, didnt jump out of warp/hyperspeed at the right moment? Now you gotta loop back around which takes another 3 minutes. Loop of shame!

Those who call it a loop of shame have forgotten utterly the mobius strip that is supercruise navigation. No shame in doubling back. Call it the U-Turn of Inevitabilty.

You need the new supercruise assist module. Select where you want to go from the nav panel. Select Super cruise assist, point at the target and the auto cruise assist does the rest.

No more loop of shame.

I actually handle it well in keyboard and mouse but I am used to it because especially from my late teens to my early 20s I played(with keyboard) loads flight sims and other games requiring a lot of keys like MechWarriors 2, 2 Mercenaries and 3

I really want to like this game. I really do. But the “new player experience” is beyond awful. The tutorial missions honestly seemed to be designed with the assumption that anyone doing them already knows how everything works. (“Well duh! The person writing them knew where everything was, and the tutorial missions were super easy for them!”)

I’m also not at all a fan of the fact that it’s open PVP by default, and the only complete opt-out is to just play singleplayer (but still online.) I’m aware there are groups that “mostly don’t” PVP, but that’s still on the honor system. Someone could have a super bad day or a “to kek with it and I don’t care if I get booted, imma frag that ship” moment.

I don’t do PVP, to the extent that I normally won’t even enter mixed PVP zones. No matter how “safe” it is when you’re not flagged. There’s always either a way to break that, or someone so determined to be a psychopath that they’ll follow you until you log out being as annoying as possible, because what are you going to do to stop them, carebear? So… yeah, the fact that the game defaults to jamming everyone in open PVP mode is also not a “plus” feature for me. :(

Can I Just ask, when you refer to the New Player experience, do you mean the new(ish) Training mission and Newbie area? If not, they’ve revamped the new Player Stuff over the last couple of updates (Much to the grumbling of us veterans) with a decent tutorial and Safe area for newbies.

BTW, if you want to fly in a PVE with other commanders, you need to apply to join the Mobius Group. Join Here. They manage the group to make sure anyone who PvP’s in the group is kicked and they’ve got over 40,000 members, so there are plenty of people about.

Probably before it was updated, I guess. Out of curiosity, why would improving the tutorials cause “veteran players” to grumble? Because the old tutorials were terrible. I expect a simulator to have a steep learning curve. The curve in Elite loops back on itself, then plowed straight into the ground at mach one. I mean, unless the problem is that now new players might be able to understand the game without watching 20 hours of youtube guides first? (Assuming they’re any good – the ones I tried were to completely awful that I’m not convinced anyone involved with making them even knows what a tutorial is FOR.)

From my own recent experience starting over on a new PS4 account I would say the current revamped starting experience /tutorial is so much better at explaining and showing you how things work.

I remember watching a Mop stream years ago of the tutorial, between it glitching and plain telling you the wrong buttons yeah that was aweful.

Happy to say things are much improved these days though as always I am sure there is room for further tweaking.

We grumbled because apart from the Interstellar Iniatives this year, all new content has been aimed at new players and there’s been very little content for the veteran players.

It did so needed a better new player experience though so that when we get the ‘New Era’ late Next year, it will get more accessible for new players

I actually had difficulty to motivate myself getting into before 1. They revamped the tutorial and 2. They added Supercruise and Docking computers(standard in ships)

Good to hear that the new training/newbie area deployment is out, and good. Previous setup seemed awful. May reinstall, and see what’s up. Appreciate the link to a strong PVE group.

Just recently dug up my Cyborg Evo controller and got it drivered up. Maybe it’ll work well in the ED concept….

Every time I see this game I think of the original C64 version:

I have a copy of ED. The lifetime, all-future-expansions-included version even.

Whenever I want to scratch the flight sim itch, I fire up the OpenGL unofficial remake of the original instead. I actually find it a much better experience than ED.

Been doing the trading community goal in my baby Asp over the weekend. Certainly requires a bit more effort when you cant rock up to these in a huge ship like I would have done on my pc account.

Still it was fun and I had some good interactions with my fellow commanders in the ps4 community.

I started the bounties part with my Vulture – I am also competent in combat but playing on PC. Made 686k in bounties earlier today