Part of the reason it’s been so easy to write for the Black Desert Desert Oasis column is that I really love this game. But just because I love a game doesn’t mean it’s perfect. Even though it won our award for most improved MMO, it’s still got a long road ahead of it. There’s so much more this game can do. For today’s visit to the oasis, I’ll discuss improvements I’d love to see in the upcoming year.

END_OF_DOCUMENT_TOKEN_TO_BE_REPLACED
The ultimate irony when it comes to Black Desert is that despite its beautiful graphics, there’s a ton of graphical glitches that need addressing. The most notable grievance players have is the pop-in. I recently did some grinding in the desert to kill some centaurs, and that pop-in was just so hard to ignore. It’s on a flat plain, so players can see for miles. But with the myriad of tiny shrubs and brushes dotting the desert, they just kept suddenly showing up as you move forward. The same goes with the centaurs suddenly showing up too. And I’m not talking about things that were like hundreds of feet away. Some of them popped up within maybe 50 feet of my character.

As for getting a full-blown fix on the pop-in, I don’t think it’s totally possible. It’s a limitation of the current engine. And even though there’s still plans to put this game on an upgraded engine, that still seems to be far off. The best thing they can do is find ways to hide it. Case in point: Kamasylvia and Drieghan. These locations came much later, and it’s evident the team developed ways to hide it. I think going back to older regions and finding some kind of effect that’ll help hide it is more than enough for me.

But hey, maybe if they manage to put the new engine into the game and it addresses that in 2020, I’ll be one happy camper!

This year saw the rework of the Fadus Habitat and Polly’s Forest. Prior to the update, people rarely went to these spots. The amount of loot and experience players received from the Bandits, Nagas, and Fogans dwarfed any mid-game area available at the time. But the rework added more spots that were both profitable and gorgeous to visit. I want more of these! It would be nice to take some of the pre-55 areas like the Treant Forest or on the Primal Giant Post and add a high level grindspot near it. It’ll be a nice use of the space, since otherwise most people visit it once during the main quest and move on.

Some small tweaks on all grindspots would go a long way as well. A few months back there was a special event that increased the spawn rates in some spots. I’d love this to happen for all areas. Doing so will make it easier to share the hunting spots and make the game just that more approachable for players who don’t want to join because of the open world PvP. In fact, a recent patch improved the amount of silver monsters in some grindspots drop as well, I’m looking forward to seeing any more improvements to the grinding!

While we have red battlefield available and it offers gear limits, there isn’t one where the game automatically restricts everyone’s gear. I’d like something closer to Guild Wars 2 where all the levels and gear are all normalized. That way, players can just dive into the PvP from the start. I really would like to see this because while open world PvP is exciting, sometimes a quick go around with another player on even footing would be fun.

As much as I enjoy the moment-to-moment encounters of an open PvP world, I would prefer to have a mode where its not dependent on how hard a person grinds, but how much skill they have with their chosen class. I also don’t get enough practice because players I face against are either way stronger than I am or die in a few hits. A space where the PvP is both consensual and not gear-based is something this game needs. I’d be happy with just a red battlefield mode where everyone’s synced to 61 with all their skills maxed out and their gear equalized. Since class balance is not perfect, having this environment will help figure out any places they can address balance.

Dark Knights are so edgy. This is really a personal wish. We already have a great-sword wielding male character in the warrior’s awakening, but I’d like one more akin to a rune-knight that uses dark magic to augment their abilities. Its awakening can go from a great-sword to something insane like an even bigger sword or something. I could imagine it having fast mobility but long attack animations. Who knows, if it’s good enough, I would switch mains just for it! Fingers crossed this happens this year. I wouldn’t be against the idea that he uses a rapier for unawakened form and then a massive greatsword as his awakening.

Maybe experiment with a PvE server?

This one is long shot. Some players want a PvE server, but I don’t see this as much of a possibility because of the logistical issues it can introduce. The open-PvP is balanced out by having 30+ servers players can freely switch between. Players who don’t want to PvP can simply switch servers. In my experience, if a grindspot like Polly’s Forest has too many people, I can switch to a different server and won’t have a problem finding a nice rotation to work in. Of course, if push comes to shove, I still have the option to fight for it. 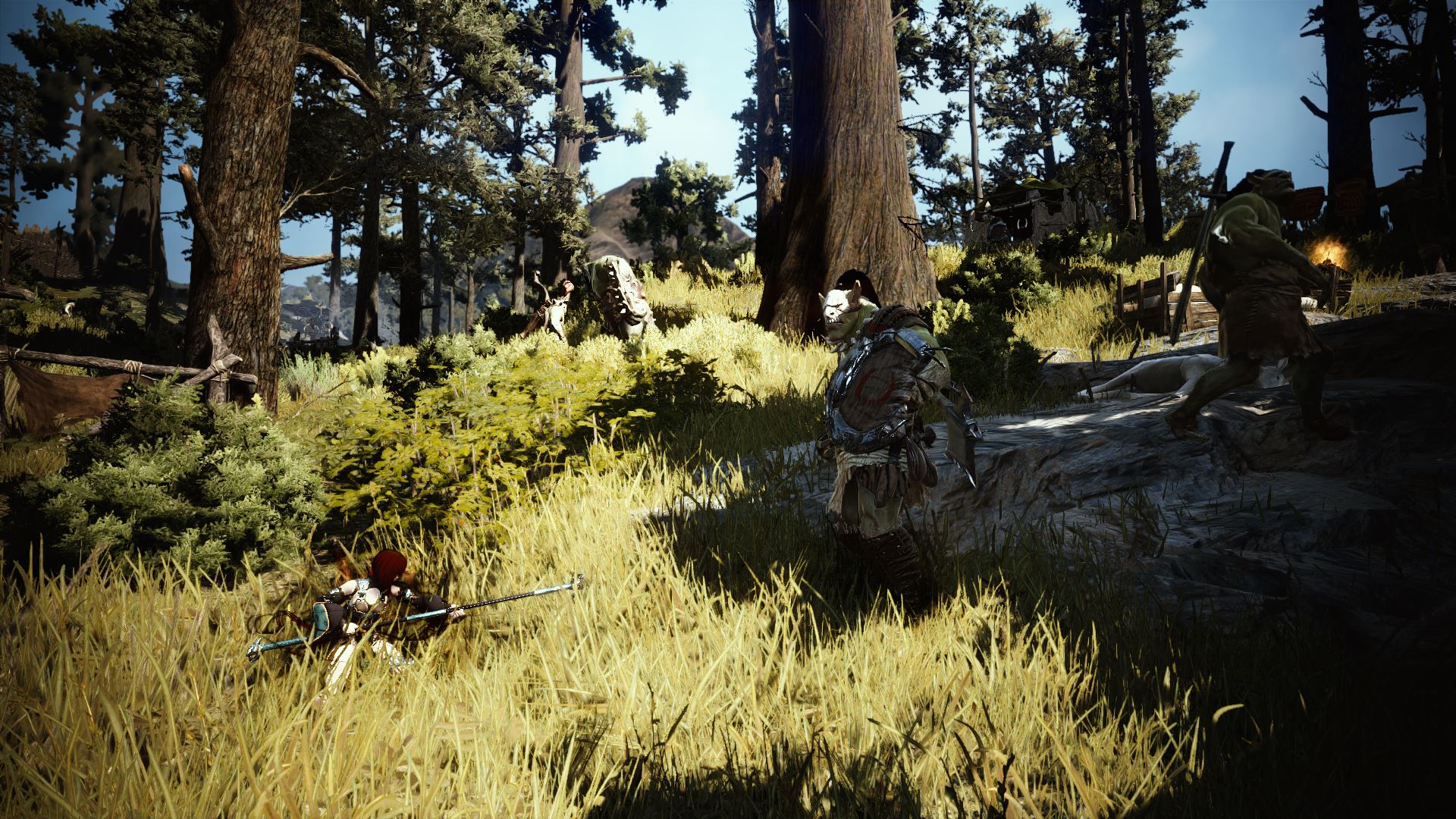 Under the assumption PA does try such a server, it might put in only a few servers to work with, but the only option would be to move. Players would have to use their words, which can go either way, but I’m going to take the assumption players playing on those PvE servers would be using choice words to get players out of their spots.

Of course, I’m open minded. Maybe PA can figure out a way to make it work. I’ll be eager to see what it can do.

Looking forward, I can confidentally say that Black Desert Online will enjoy a bright future, which is much more than I can say for most MMOs lately. I’m excited to see how it’ll grow in the upcoming year. And who knows, maybe around this time next year, the pop-in will suddenly be a relic of the past.

Remember the time they removed a rock and it made the patch notes? That’s PA for you!

i play up to the PvP point, then roll a new character. I like the game but have no interest in that.

The pop in thing is never going to happen. It’s basically the game engine and the way it prioritizes things. In most game engines how things work is it displays a maximum number of things, but always prioritizes the environment. So like the trees and rocks load in, but if you’re at 25/25 people then it doesn’t matter if there’s 100/25 people you’re only going to see 25. This causes a load of game play issues, especially in large scale PvP and games with large scale PvP (Planetside 2 was most notorious) it’s a nightmare. BDO’s engine works where it says we’re not going to prioritize all that background garbage and instead focus on players so players always load in. This works better for things like Siege or Node Wars.

Some grindspot reworks came with this week’s patch with huge boosts to the trash loot value at various spots around the world. Older content like Treants or Giants is hard to spend time on I think because it’s just content that takes about 4 hours to bypass entirely. Like I’d rather they spend time focusing on areas that we are going to spend time on or even creating new ones.

I like the PvP idea, but I think a lot of the PvPers that are left are ones who enjoy progression with PvP. A lot of people dislike that idea, but there’s also people who like the idea that a veteran player who’s put in the time should be stronger than some random noob. The balance is currently way too much in favor of veteran/gear, but I wouldn’t want it eliminated entirely either.

More male classes in general would be welcome. I get the “thiccness” sells but would be nice to see some parity (7 male, 12 female right now with Guardian).

PvE channel I just don’t know about. I’m not opposed to the idea in theory but I also kinda think the people who complain about this kinda thing are being super nit-picky. Outside of a few high end extreme spots you can go just about anywhere and rarely run into anyone willing to repeatedly flag up and kill you over and over. Most people who want to play like that are already on Arsha PvP channel. If the complaint is you can’t go to the high end spots, it will be exactly the same scenario on the PvE channel as everyone would be constantly trying to steal/grind on top of each other at those spots instead. Having played recently on Project99’s green server having a grinding based game with no PvP solution gets super sweaty/rule lawyery. For now though they’ve repeatedly said no, just like they’ve also repeatedly said they’re not going to make the penalties for PKing any less harsh.

All I want is a PS4 sale down to like $10, and performance improvements there. And maybe a PvE server, that would be super nice.

That and the new GUARDIAN (not berserker) class. Looks rad AF and I totally want to play.

Are you talking about the Guardian or the actual Berserker class?

Cause the new Berserker Succession just came out and it’s the first class I’ve honestly considered rerolling for because it looks amazing.

January sale started for PlayStation Store, even while Christmas sale is still ongoing, which is a bit nuts. Anyway Black Dessert got a big discount (£12.49 standard edition)

Me I am probably going to get the latest ESO expansion for under a tenner.