Yesterday, members of the Elder Scrolls Online community began receiving mysterious packages in the mail. Despite likely instructions for the items to remain “for your eyes only,” many images of the contents began appearing on Twitter shortly after receipt because this is 2019 and of course they did and even ZeniMax was retweeting them.

END_OF_DOCUMENT_TOKEN_TO_BE_REPLACED
The envelope sent to MOP’s Larry included what appears to be a canvas parchment with a crudely drawn map, some daedric runes, and several drawings and symbols. 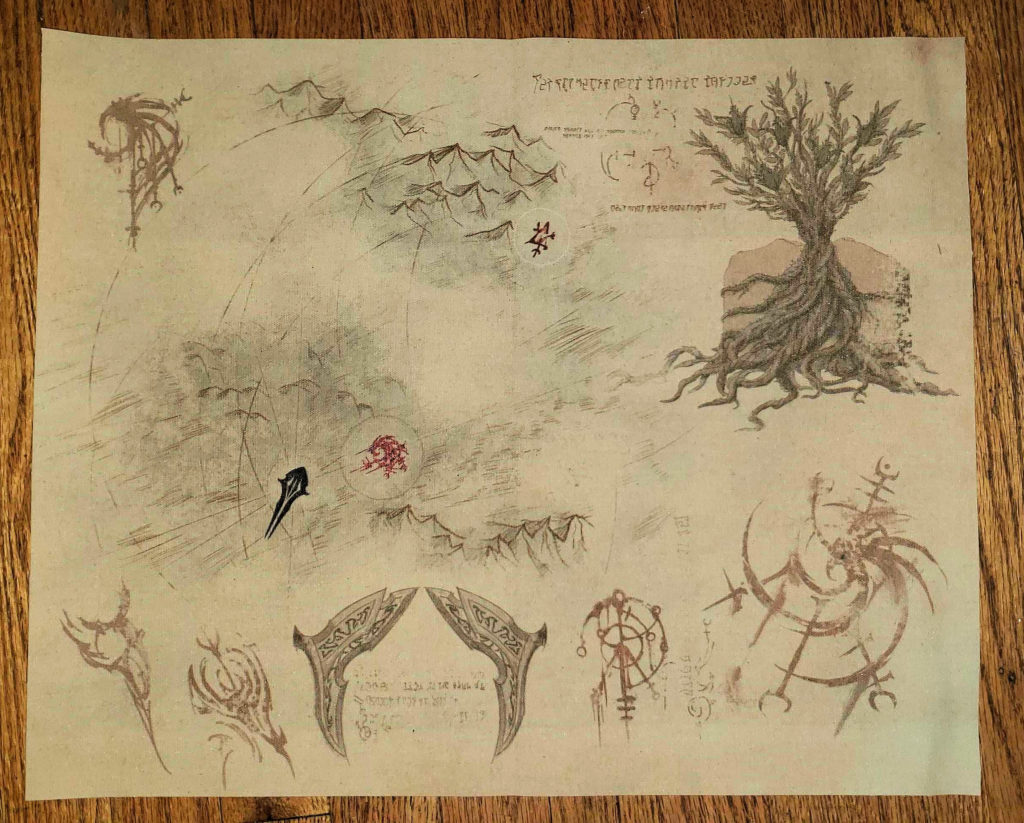 The parchment was accompanied by a summons from none other than Sai Sahan, captain of the Dragonguard himself. The text reads:

Adventurer, Your efforts in Elsweyr were instrumental in dealing with the Dragon threat. For that, you have my thanks.

However, I fear I must alert you to a rising danger. This journal was entrusted to me by an old friend, as I now entrust it to you. Notice the strange markings. They hint at dark magic, of that I am certain.

Your talents are once again required, my friend. I leave this mystery in your capable hands. 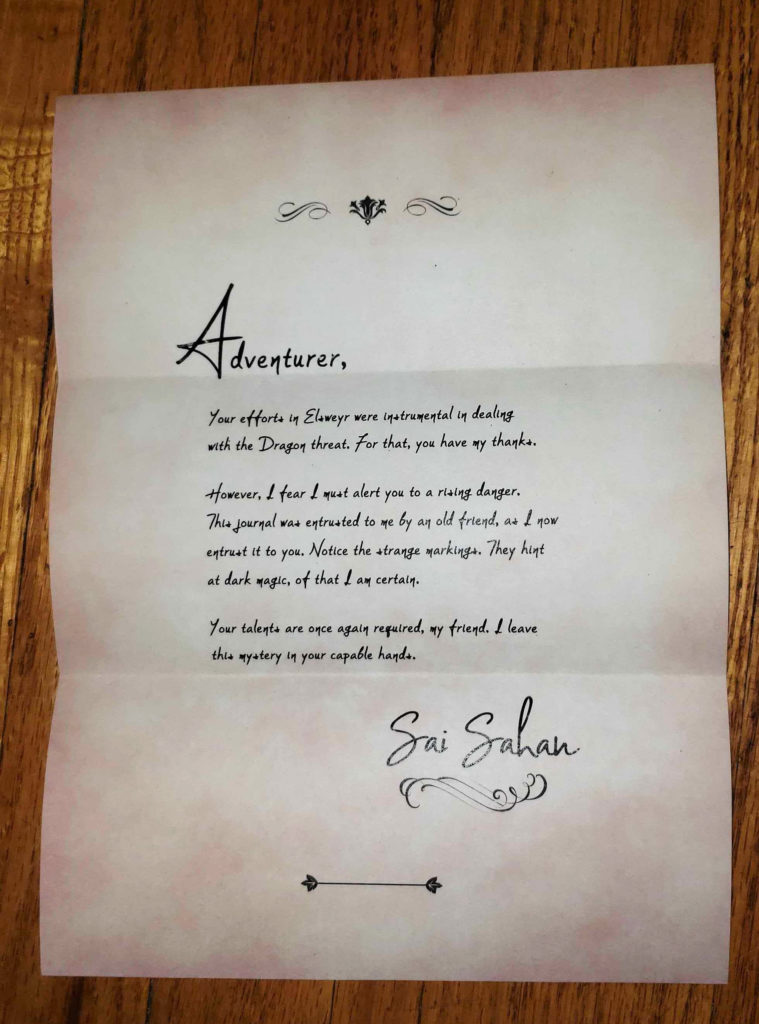 The parchment has sent the ESO community all aflutter with theories and hypotheses. No doubt we’ll learn much, much more at the big reveal in Las Vegas on January 16th, but for now, everyone’s mulling over what the letters mean in the context of what we already know – namely, that the next season is sending us into the Dark Heart of Skyrim.

"death is naught
but a fitful sleep."

Very chilling words i must say. My imagination runs wild but keeps snapping back to that symbol on the urn. Its design looks like something found in Molag Bal's realm, but less Xivkyn and more Sanguine. pic.twitter.com/PsrpeiNA4V

That’s cool! Maybe they’ll finally kill Online in the next month or two and actually give us Elder Scrolls VI 😧👏

Second, have some patience unless you want another FO76.

Besides, Starfield is coming first.

I’m torn on this. So, we’re gonna spend another year being fed Skyrim related stuff (dragons being the first instance) and not to mention that its going to be a watered down out of scale variety, that’ll be dead content a good month later.

I can buy skyrim right now for much less than this dlc will cost. I understand that they’re trying to complete the map but I’m just not sure how excited I am for the next bit to be Skyrim related.

That’s why I hate Skyrim. Thanks to it, I also hate Vikings, Norse mythology, dragons and forced “epicness” on every step of the way. It’s the game that got me into the TES world, but the game I like the least.

This chapter feels like it will be reiteration of the 5th game, I can’t get excited either. The only chapter I got was Morrowind and even that was disappointing. I think the game sort of ran its course and it’s now somewhat more predictable and less interesting.

Now…I hold absolutely no strong emotional attatchment to or nostalgia for skyrim in any way whatsoever. Not trying to be a contrarian or anything but honest to god, when I played skyrim when it first launched even back then I was not blown away by it. Production values aside I consider morrowind the universally superior rpg.

When morrowind was announced for eso I was ecstatic, because no one understand what a chapter entailed at that point, which we later found out it was simply what they decided to label orsinium grade dlcs as they officially shifted their production and content release cadence.

Chapters in eso are great for brand new players, but for seasoned players (I’m at about 8k hours of play time) they ultimately represent new gear to collect and a new trial. The content itself is generally face roll and feels more like a miniature tourist trap of it’s original source material.

If this next update doesnt substantially shift the status quo for the game, I will be casually waiting for whatever their unknown new mmo zos is working on, to finally come out.

For me TES3 Morrowind is also better than TES5 Skyrim, it has a very hig replay value which Skyrim doesn’t and I still have it installed and play it every now and then.

I’m a little short of 1000 hours in ESO, but I quit it, the game has nothing to motivate me to play it. As you say – the content has faceroll level of difficulty and the chapters are underwhelming. The Morrowind Chapter was announced in the trailer like “going back home”, it literally translates to “this place is so massive and it has so much content, you can just play only there and forget about the rest of Tamriel”… except the reality was that yo can complete the Chapter in like a weeks if you’re expeditive. Since I love Morrowind, I spent a whole month completing the chapter, because I wanted to explore every nook and cranny of Vvardenfell. I was also really disappointed that Red Mountain was inaccessible and I tried to do wall-jumping to get there, but couldn’t. That was in March 2018. It actually fired me up to spend my whole time per day wall-jumping, trying to leave the boundaries of the map, in all honesty, I had more fun trying to reach unreachable places than playing the game and the quests I never did before. I got so far into wall-jumping that I got my character stuck in Clockwork City’s pocket into that Daedric realm whose name I forgot right now, I got so scared that if I contact support and they saw I was exploiting the game they would ban me so I deleted my character and started a new one.

But ESO in 2018 and 2019 was already too easy and boring. I remember when I beta tested in 2014 and was blown away, and I got around to buying it in 2015 and it was so much fun – it felt like Vanilla WoW – mobs were hard to kill, you died a lot, there was no level scaling… it was just fun.. then they ruined the game and made it too easy and casual.

you fought a dragon in a game before skyrim too in the elder scrolls redguard.
that particular dragon is Tiber Septims dragon.
and a ton of dragons in Tamriel are from Akavir as well since something chased them all off the continent

Yeah but Skyrim is when they caught on mainstream anyway. Lore aside, I still feel like ESO is standing still and now they’ve got an excuse as everyone will jump around for more Skyrim next year..

How much longer till the series moves past Skyrim as it’s focal point?

Dont “well actually” this man.. that is besides the point. His comment is spot on. Skyrim and dragons are unanimously linked in the mainstream eye of this franchise’s player base.

How can you read this? There’s no pictures!

Reachmen and Hag Ravens corrupting those trees that are scattered around Skyrim like the one in Whiterun for example.

Okay this is REALLY neat. Will be excited to see how it ties into the announcement next month!

The Daily Grind: Should international MMOs have global servers or regional...