Happy patch day, me hearties. We’re still doing that, right? The pirate thing? No? Awww. Welp, Legends of the Sea is live in Sea of Thieves today anyway, and it’s a bit of a hodge-podge of little things, from the new Gilded Voyages to Umbra’s titular “legends” quests.

“The mysterious Umbra, an old friend of Duke, has settled at the Lagoon of Whispers. She considers herself a truth seeker, recording the greatest legends for all time – and there are no greater legends than those on the Sea of Thieves! Umbra has collected many rumours about the most famous (or infamous) pirates, just like you, who achieved great and memorable things on these seas. Celebrate the deeds of your fellow pirates as you follow Umbra’s clues and uncover these Legends of the Sea. She may even share her knowledge of tattoos with you. You can start tracking down the truth behind Umbra’s rumours immediately. Simply check your Commendation list to find all her clues! Each one will lead you to a certain place, where you must search for something to investigate. Umbra herself can be found at the Lagoon of Whispers; seek her out to learn more about her task. You’ll also need to speak to her if you want to complete certain rumours that that require a personal touch!”

Rare also dropped off this handy infographic summing up the playerbase’s many exploits. No not those exploits. The good ones. Well not good, but… you know. Gotta say, I’ve never seen an infographic calling out the player who ate the most food before. 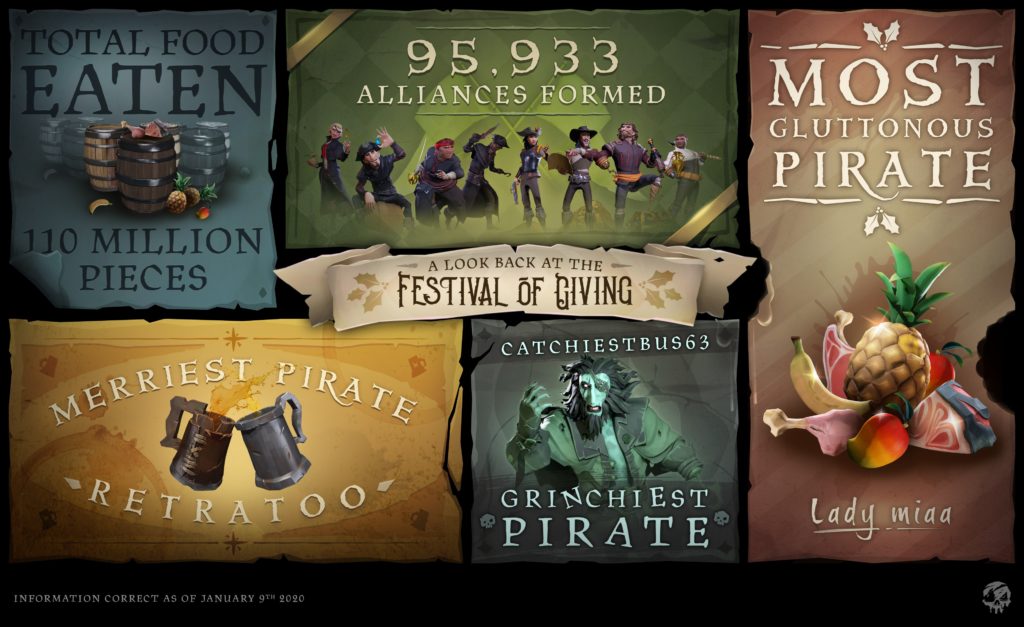 Nice tube top she’s got there… Somehow it would seem less sexist if she was actually totally nude :P

Gotta show off the tats somehow.

It gets hot in the Carib – but only the trashy French take off the top.

Quit objectifying that cartoon that doesn’t exist, she has fake feelings that may get hurt if you clap.