Dragons: They come in every shape, size, and element, and about all of the ones that have ever been invented exist inside one MMO or another. It’s a geeky staple that seems to transcend even genre lines, as evidenced by our headline shot of a Chinese dragon in World of Warships, of all places.

“In World of Warships, players may select from many different ports,” posted Rees Racer. “One is named ‘Dragon,’ and while fictional, still makes for some lovely shots. Here, my battlecruiser Scharnhorst looks resplendent in it’s black camo against the striking backdrop.”

Or, if you’re in the mood for more traditional dragons, Guild Wars 2 mayyyy have one or two to share with you.

Hikari went to great effort for this picture: “Spoilers in this one, but it’s been like… six to 12 months or more? No, this one is not a cutscene — and no, it was not easy.” 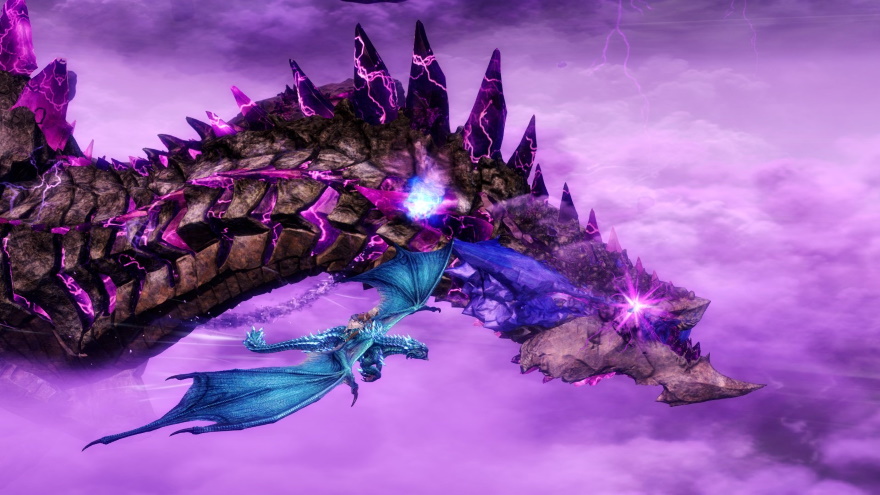 When it comes to epic showdowns of epic destiny, there is none greater, nor more lopsided, than that of a woman versus a Nazgul and its dragonish ride in Lord of the Rings Online. To make this fight fair, the Nazgul really needs some serious backup. Joey took this impressive picture, and it shows how this game still delivers some impressive story beats. 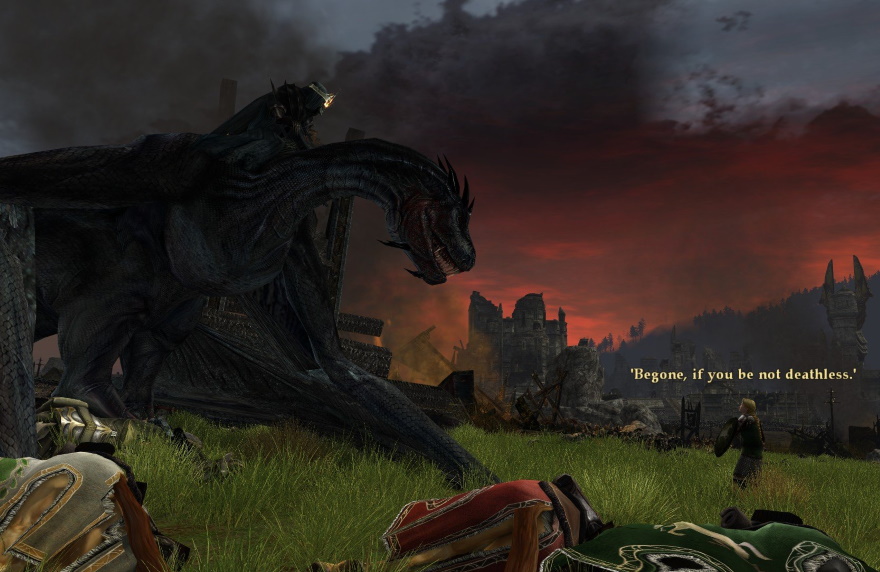 Over in Final Fantasy XIV, Vincent is making best friends with a dragon pal. The two of them proceeded to soar off on amazing adventures as they fought crime, solved mysteries, and went on very confusing dates. 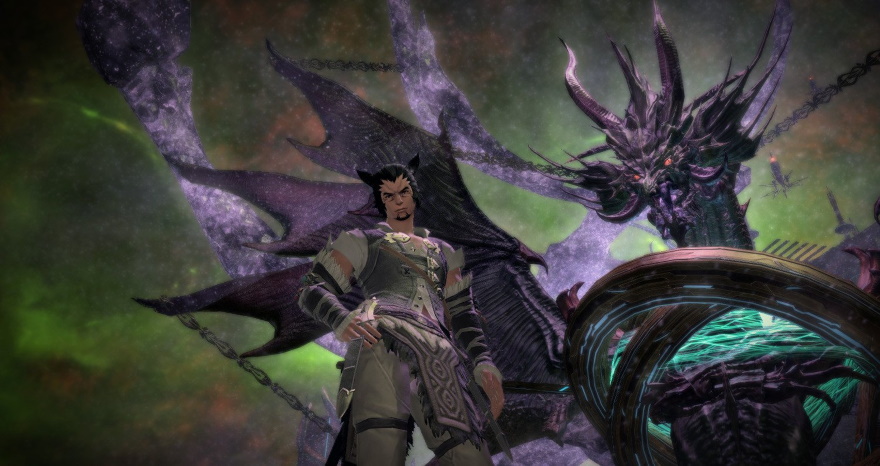 Utakata is “The Girl with the Dragon Disposition” in Blade and Soul. Word is, an actual dragon tried a double-cross last week and got eaten alive by this adorable avatar. Don’t mess with the pigtails or you’re gonna get whipped, is what I say. 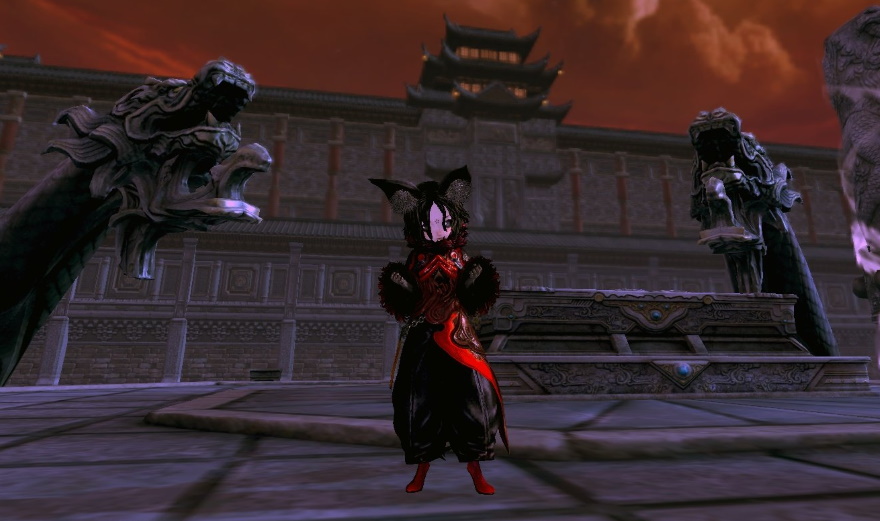 I’ve got it and you want it — a weekly screenshot challenge, that is! If you like, post a picture along the theme of one of the seven deadly sins — or just slap up a screenshot that you were proud of this past week!

My elezen sits on horses sidesaddle. Next pic is her Ninja glam.

My Villagers and Heroes character, who is an evil dark lord bent on saving the world from the big bad…because he wants to be an even bigger bad, and someone else already ruling or destroying the world would make that difficult. That’s his pet spider, Fearfang.

IRL I hate Spiders, because I’ve been bitten by them a few times and it bloody hurts. I enjoy killing giant spiders in games. So, my character having a spider mount is weird, but whatever, I got it for free.

Don’t have anything super current but if I was still running FFXIV daily like I was I would still be running this glam. I give you my Saber PLD.

I’m going to go with the option of something I’m proud of this week! I added ReShade and did some .cig file changes to improve the graphics of SWG Legends Emu and I was rather proud of these test shots, even if I’m unable to center a shot on a character as of yet. The first shot is of the Talus night sky and the other is of my character puttering around on Dantooine.

Recently, I’ve been on a quest to play some different games, but only a couple of them ended up being MMORPGs.

I gave Final Fantasy XIV Online another go, and found it to be excellent, and a lot of fun, but it’s such a specific flavor of fantasy game, I knew that I wouldn’t play it regularly enough to justify the ongoing subscription cost.

I took some FFXIV screenshots for One Shots (a.k.a. “The Justin Show”) but they all turned out so “meh”, despite my efforts, that I deleted them.

This column has a history of excellent FFXIV screenshots, and I didn’t want to sully that reputation. :-)

I also gave playing a Nightblade (rogue) in The Elder Scrolls Online another try, but ended up frustrated by the game’s handling of the class compared to the others it offers. I got a nice screenshot, but I did not stay in the game.

I ended up going back to Neverwinter Online — which I did not like very much at launch, but found it tweaked and improved enough that I really enjoyed myself there, and I played a ton of the game on my PS4. So much, in fact, that I had to take a break — I was playing it waaay too much.

I wasn’t able to take great screenshots in Neverwinter with the PS4. There doesn’t seem to be any way to turn off the game’s user-interface overlay, and while the camera is fine for gameplay, it’s not so good for taking impressive screenshot selfies.

I’ve attached a pic of my rogue character, and his NPC companion, a good-aligned cleric whom I named Renerva Fairheart.

Just goes to show that you can’t judge a book by its cover, nor an ex-infernal by her devilish tail. :-)

So many dragons to choose from, but there’s only on Mordremoth!

By the looks of that crazy battle, you’re probably relieved that there’s only one! :-) Thanks for the pics!

…the places we venture to for good lighting.

P.S. Thanks for the shout out this week :)

Vince, if Vogue magazine ever starts up an Eorzea edition, I’m sure they’ll hire you as a fashion photographer. You make the game look even better than it already does!

That is definitely the Nabaath Fending set. I have most of the Ravel-Keepers sets just from doing that dungeon so often.

Yah, I like the Nabaath sets because they incorporate the crafting and gathering items from the prior expansion. The Ravel sets are quite nice as well, the gloves make for some interesting combinations with other gear sets.

I ended up not liking the Nabaath sets very much because they were undyable. On the other hand, I put the Ravel Aiming set into my glamour dresser. Looks great in Dalamud Red.

Fashion comes before a fall… o.O

PS: Thanks for the plug again Mr. Justin…

…but just one note of clarification: Those aren’t pigtails on my character in subject, but her ears. The rest of your assessment on her is correct though. <3

It’s like nobody in the game world ever heard of flats, Uta! Heels everywhere!

Technically my character in subject is wearing flats. But like with all Lyn feet which use Worgen and Vulpera mechanics to sustain themselves, it gives the impression of stilloets with that type of shoe. But I assure you it’s not. And none of my toons would be caught dead in those to begin with. >.<

Yeah. Lyns feet are more like spring loaded paws. Cat like, of you will. And they are fast little guys and gals. But ironically they have a hard time walking slowly. Heh.

I’m extremely proud of the look of this character, my tribute to Neal Peart – Bytor The Snowdog.

By-tor and the Snow Dog! Now, there’s a blast from my past! Thank you for the pics!