Get out your “it’s happening” gifs or maybe just your “thank goodness, some good news today” signs: Sega formally put a date on Phantasy Star Online 2’s western closed beta, or more specifically, the Xbox One North American closed beta. You’ll be dipping in over the weekend of February 7th.

“SEGA Games announced today that “Phantasy Star Online 2”, a massively popular online action RPG game in Japan, will begin closed beta testing for the upcoming North American version on Xbox One on Friday, February 7th at 5:00pm PST (8:00pm EST) ending Sunday, February 9th at 12:00am PST (3:00am EST). This closed beta test will introduce North American players to the PSO2 game world with fully localized text and character voices in English. Players who participate will retain their progress from the closed beta test and those who answer the call during “Urgent Quests” have a chance to obtain special in-game rewards that can be used when the game launches in Spring 2020. Players are invited to explore numerous worlds with friends and experience PSO2’s unparalleled action combat and character customization. Choosing from four unique races and nine classes, players can join forces with up to eleven other operatives at a time to experience unforgettable battles and boss fights.”

There’s a whole stack of rewards for players who take part in the tests, along with a “special in-game concert” at 11 p.m. EST on February 8th. 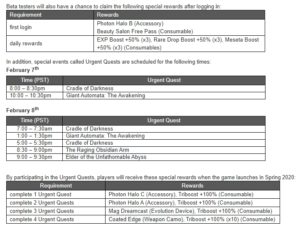 Beta signups began in December, but of course, you’ve been waiting for this game for eight years, so you can probably wait a few more weeks.