Before we start: Yes, I know about the Daybreak news. And yes, I have some thoughts and questions about it. I considered tossing aside my current EverQuesting plans until later, but MOP’s Eliot did a good job covering many of the concerns, and we’re still awaiting the interviews we’ve requested. When I can get more direct information from the new studios, I will definitely be sharing it. For now I’ll continue my focus on a project that has been a couple months in the making: My EverQuest II return. And it is all because of story. My story. (Who knows, maybe this is my only chance to tell it!)

This past fall I returned to more regular play in EQII. It wasn’t to prep for the next expansion, Blood of Luclin, nor was it to finally decorate one of my many houses (though I do need to do that, too!). This return was to experience a return to deep storytelling and roleplay with a friend like we had many years ago. Wait, isn’t EQII a themepark? Yes, it is. But it’s also uniquely designed to allow for a continuation, a reboot, and even brand-new stories. It is just what I needed! It could also be the experience you are looking for now. 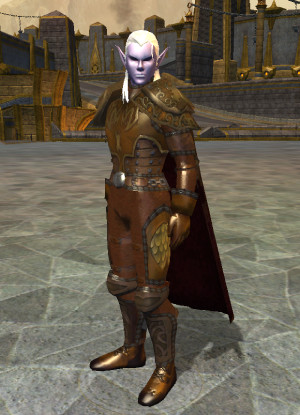 Before I delve into how EQII fits perfectly with restarting or resuming roleplay, let me offer some background on ours and why I am so excited to continue it. We have a Teir’Dal House in Neriak, not unlike Drow houses in the Underdark. That came about because my character is actually tied all the way back in history to my matron from a Dungeons & Dragons campaign decades ago. She is still my most beloved and favorite character.

This matron moved seamlessly into the Lineage II world, continuing her surface world goals of reuniting light and dark elves after my D&D adventures ended. There, I made a little sister — one who kept her dark elf heart and resented her sister’s goody-goody goals. That little sister left, intent on reforming the house in true dark elf fashion. Her first stop was Freeport. (You can guess my excitement when Neriak was added to the game!) There, she began to re-establish the true house.

A dear friend joined me in EQII in Freeport, and from there the story grew over the years. One reason I love this story so much is because there is a long, rich history. While each iteration has been adapted to fit its environment, the spirit of the story spans more than half of my lifetime. And I have been sad not being able to play it.

Why EQII is perfect for a return to RP

When my friend left the game long ago, I moved to other characters because playing her story solo wasn’t fun. So I was pretty excited to get it rolling again. But could it really, after such a long break? One of the problems I find when trying to return to a world to RP in is that the world has moved on and your character was stuck in stasis. It can be difficult to reinsert yourself into the world. For my friend, one of his biggest obstacles was that he no longer remembered how to play his main class at our higher levels, making play itself not as enjoyable. With a little creativity, however, EverQuest II, has some perfect ways around this.

Our two conundrums were solved together by adapting a new plotline that took advantage of the robust character features of the game. The story: For some (not yet disclosed) reason, the House was in danger, and I sent my friend’s character out on a secret mission. Apparently, this mission took years to complete! Upon return, he was changed. While he was gone, my character studied different magics. So when we returned, we set out together to practice our new skills.

Now, for the features that aided us. First, we used the vast selection of character classes to make new versions of our old characters! You can stay in a similar branch (mine continued to love fire), or you can move to a completely different sphere (his move from tank to healer). There are 26 to choose from. Twenty-six! That really is a lot of options, something few — if any — other worlds outside of Norrath offer players.

Next was taking advantage of the ability to save character templates. This allowed us to remake our avatars perfectly down to the last detail. (Because I took the time to remake her on a progression server, I had a template; there was no saving back when the game launched.) This made our transition in the story easy. However, you don’t have to use this feature completely or even at all. Instead, you could alter appearance to signify something, from small things like scars and hair color to total transformations. You could even be a totally different race! There are 21 of those to choose from. Few other MMOs offer you so much variety.

Adding this to the ability to add character slots (they go on sale quite a bit), you can temporary or permanent change your appearance for your plot lines. For us, the plan was to return to our original classes at some point. But what if you chose the story that your Koa’Dal was changed into a Ratonga by a horrible curse or magic gone awry? Perhaps you stay in that form for the rest of your days. If you don’t want to reroll, you can even buy a race potion to change your current character. 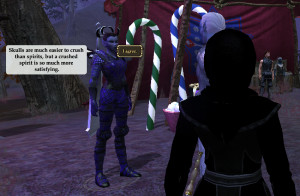 Just remaking the characters alone wouldn’t have made the return as positive as it has been. EQII has other aspects that enhanced our experience, from variety in starting areas and leveling paths to NPC conversations and mob chatter. And we can’t forget the lack of barrier for re-entry!

To start, the game is easily done as a duo, which was perfect for us. In fact, leveling is so easy two people breeze through it almost too fast. (If you are subbed you can change the AA slider to give more Alternate Advancement points and less XP to not out-level the zones as quickly.) Even learning new classes didn’t lead to excessive frustration like hitting your head against brick wall — a situation that would definitely hamper building a story. If you want to start or restart a story by yourself or with some friends, you can handily manage it.

Next, if you are starting over, EQII shines with multiple entry points and multiple paths. Perhaps you choose a starting area you haven’t played through as much. Do you want to begin in the cities or in the newer starting areas? Do you want to strictly follow the golden path, or do you want to weave your way through the zones? You can tailor your experience without having to be funneled through one set adventure.

This may not have been a feature you thought of when contemplating RP, but the NPC quest blurbs are pretty fun to incorporate into your story. Having started over with 22 different characters, I had been skipping dialogue for a while. However, this time around, I have been paying attention again. The personality that comes through and some of the quips are great, and I have found myself having fun actually responding to the NPCs beyond the canned responses the options give me. I’ve been berating the carelessness of a dwarf in Butcher Block Mountains for the elemental invasion and serving comeuppance to his so called apprentice. I also make remarks to mobs as they shout at me — whether I understand their language yet or not. I found this extra involvement has enhanced the fun factor for me.

If you have returned or are new and don’t feel up to joining the RP community as a whole, you don’t need to. Perhaps like my new duo you are in hiding, trying to avoid the crowds. Or maybe you are creating a secret organization. You can keep to yourself in the game without being hindered. The robust housing system also allows you to make your own hideouts and personalized areas to continue your stories with just your friends.

But if you want to roleplay with others, jump on into the community. (If you didn’t know, it is based on the Antonia Bayle server.) There’s a roleplay chat channel you can join and tavern nights in established game establishments as well as player-made hot-spots. There are also regular events and festivals you can partake in.

Anyone can join, anytime

In short, EQII allows you the ability to dive in and build a story for yourself with fewer restraints than you might expect from a themepark or even sandpark game. It is definitely worth a try, and better yet, it costs nothing to do so, since it’s essentially F2P. If you can only do the story occasionally, that’s fine. If you want to do two months of intense story building with an open and closed arc, you can do that too. EQII offers many options so you can tailor to what you want. That’s a pretty sweet deal for a storyteller.

Me? I am going to revel in the return to this personal story arc, with its fun new twists and turns, as long as I can. It’s fun. And isn’t that what gaming is all about?