In the last Choose My Adventure column, I mentioned how the Lahn in Black Desert felt an awful lot like a fighting game character insofar as working out the right combos and figuring out optimal button presses for solid damage. It’s really not too dissimilar from any other rotational thinking in MMORPGs, but something about this particular character and the combat model in this game feels less like lining up hotbar buttons and more like timing button presses.

END_OF_DOCUMENT_TOKEN_TO_BE_REPLACED
This past few hours, I feel like I’ve figured out one of the better combos, and boy does that feel incredibly rewarding to do. 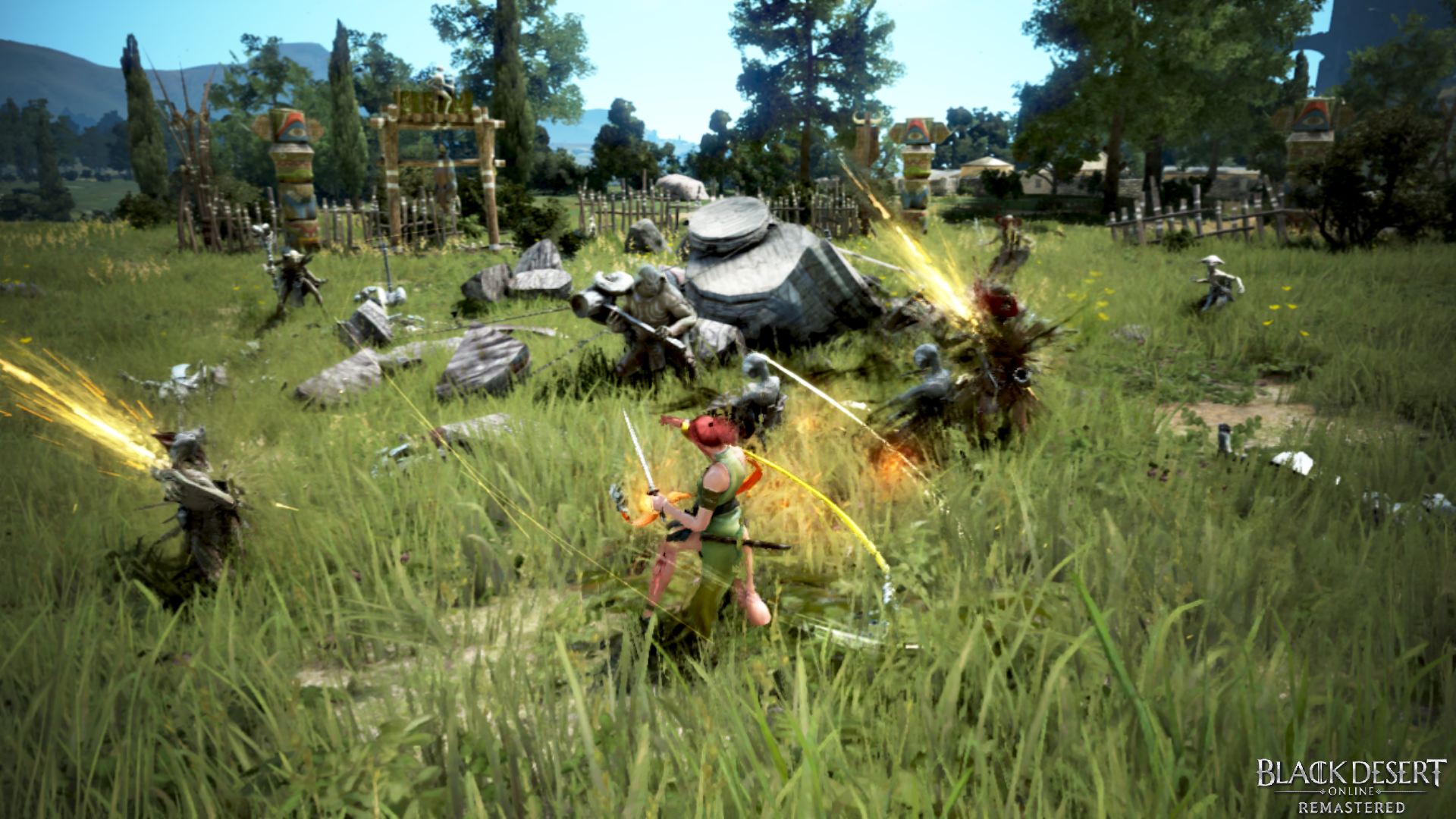 The best way I can summarize this series of moves is “charge F, back RMB, space.” The first move button press engages a couple of attacks that operate at a pretty good distance, which makes for a great opener. The second button press lets me closed the distance while the target is still suffering from hit stun, and then the final button press is a swift closer that comes out in pretty short order and often mops up. What’s nice, though, is that closer doesn’t leave me hanging out in the open very long, as additional presses of mouse buttons will let me continue to whip my crescent all over the place. That said, finding something that does take down most basic single targets before they even land a hit feels really good.

Now I contend that I’m probably not the most original Lahn player that BDO has ever seen. In fact, I’m almost certain that others have figured out these series of moves faster than I have, or have come up with even more impressive combo paths. That’s not the point, though. The point isn’t that I’m king of the mountain when it comes to Lahn players, it’s the fact that I feel like I’m learning things and unlocking new potential.

More than any other MMO out there, finding that optimal rotation in Black Desert feels supremely rewarding and satisfying. I don’t feel like I’ve been properly challenged just yet, but I still am really engrossed with working out how the Lahn operates and continuing to near that butter zone of comfortable mastery. 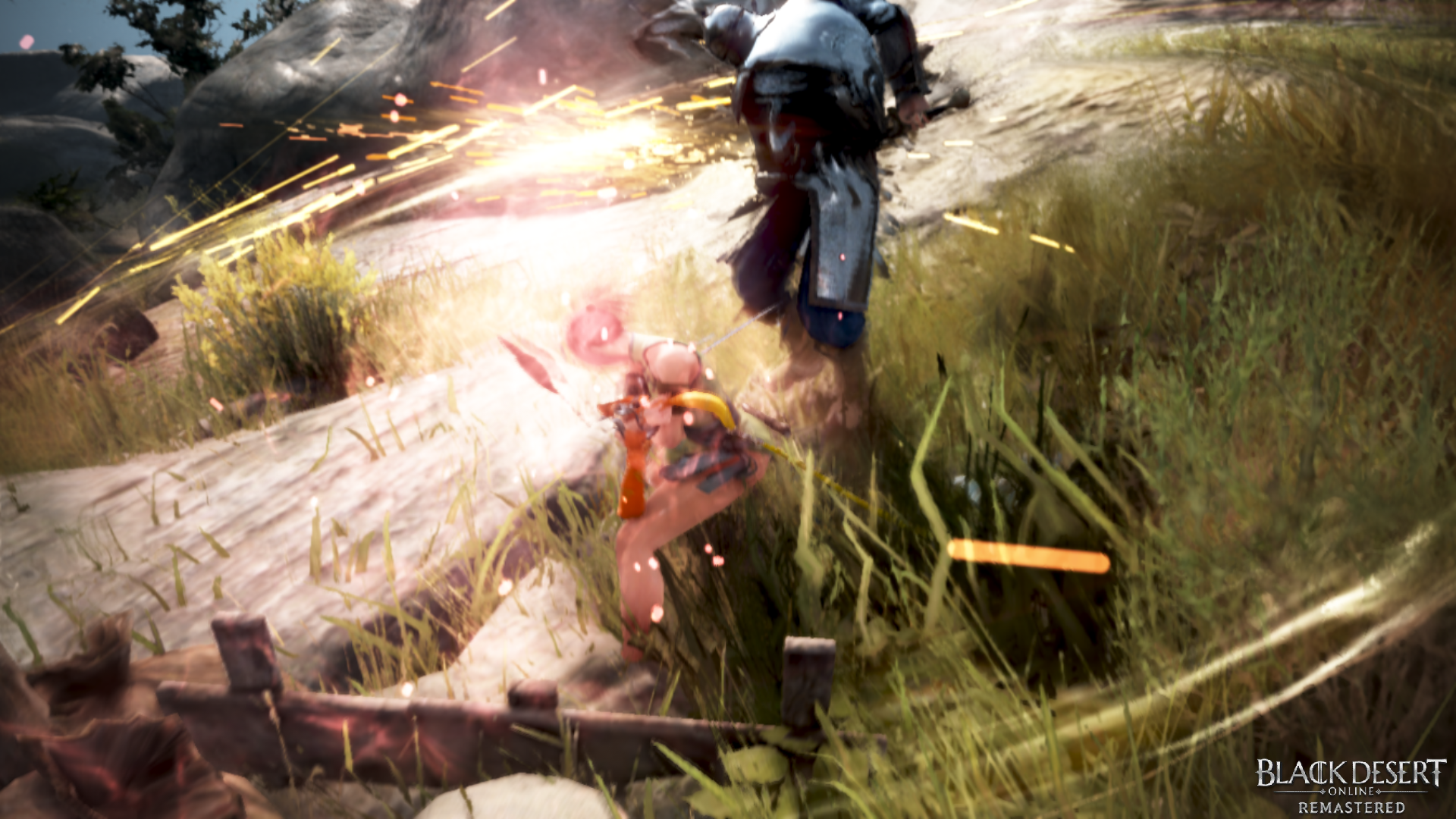 Part of feeling that climb to power, of course, is facing challenge, and so far I think I’m handling myself well in light of a slowly escalating challenge level. I’m finally running into enemies that aggro me first instead of stand around doing any number of idle animations while I fly in and unleash spinny weapon hell on them. These encounters are actually what made me work out the above combo path so I could continue to get the drop on enemies without then aggroing me.

Of course, this little bit of self-discovery in-game isn’t completely without its faults. Right now I’m still facing a bit of a test when I take on the open world boss monsters that can be spawned during certain quests. I didn’t end up near death when I was fighting the next boss monster I had to summon in the current questline, but my extremely aggressive playstyle up to this point doesn’t really avail me in fights against enemies with large health pools.

Also, I’m bad at defense. I got knocked down a lot. 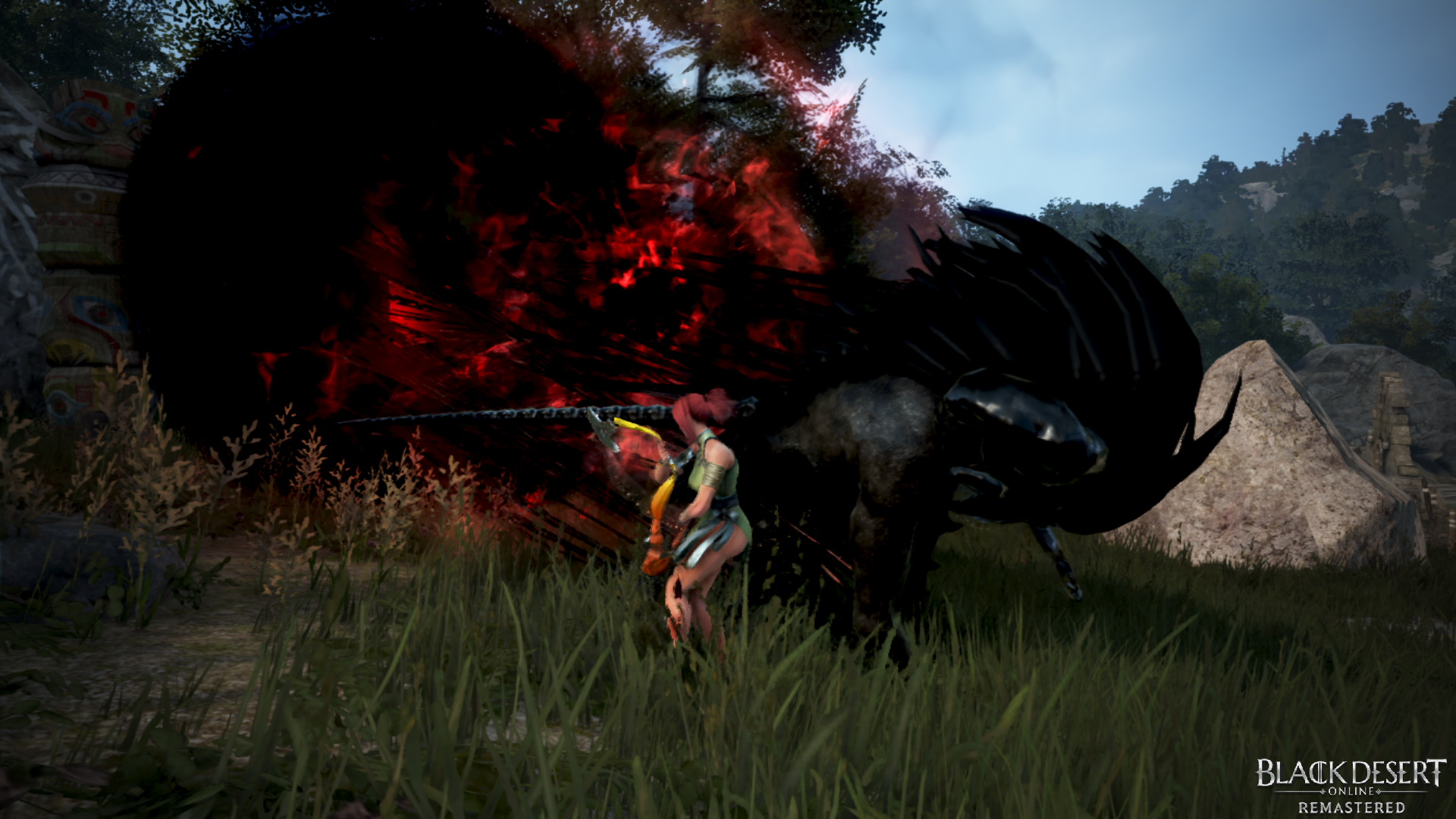 I do sometimes wonder if this is all just setting me up for something worse down the road, like significantly harder monsters or more complex button combinations that I’m likely to forget or even open world PvP. I have a strong suspicion that the final choice is probably going to bear more weight on me eventually, and I’m likely going to see all my posturing about setting up skills and executing combos fall apart as I crumble like a house of cards to the real PvP’ers out there.

Again, though, perhaps I’m overthinking things. You can’t always expect every river excursion to turn into whitewater rapids, right? Sometimes it’s just best to ignore whatever sword of Damocles is imagined overhead and just have fun. And man is combat fun right now.

All of this talk about combat and focus on learning how to control my Lahn is likely continuing to impress upon you that I’m not invested in the story. You’d be absolutely right. There was a guy who was acting like a goblin at one point? And now I’m facing off against these mercenaries in a castle ruin for some reason? I’m genuinely not paying attention to any of the quest text right now, and I’m uncertain that I should be, frankly.

I’m sure the story picks up later, especially as I perhaps get to the newly designed stuff. Right now, though, the story is just a series of speedbumps between myself and some more of this game’s brand of action combat. Which, actually, segues pretty nicely into the ideas I had for the polls this week. 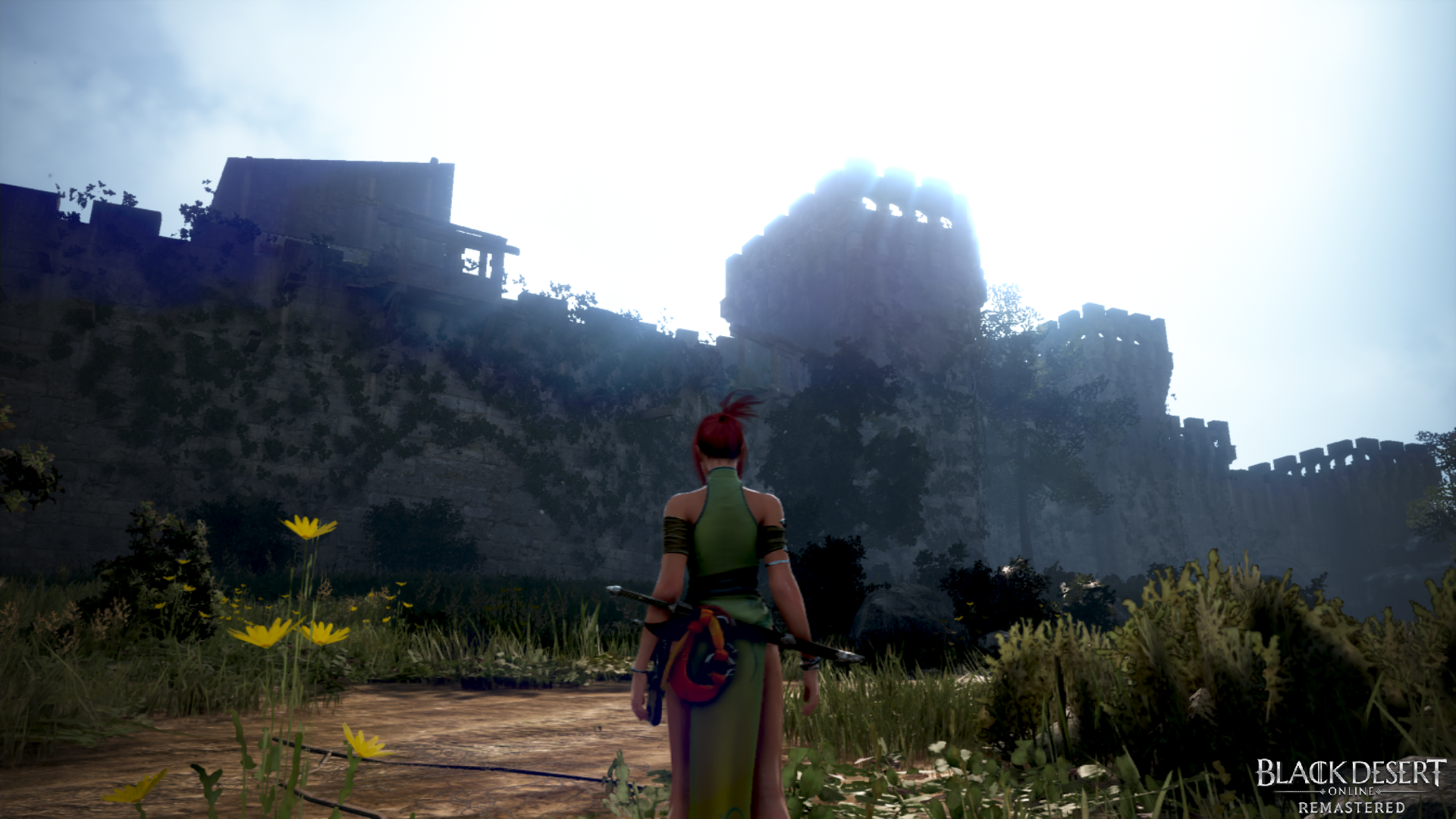 The first is about the storyline. I’ll admit when I’m probably being unfair and so I’d defer to the expertise of the Black Desert-playing public that visits the site: Is the story really that inconsequential and pointless, or are there things that I’m missing that I should be paying attention to? In short…

Should I read the storyline or just focus on getting levels?

The next poll is about taking a break from combat. Specifically, life skills! I appreciate that these are some of the more important parts of the game when it comes to making money, and I don’t really have any delusions that I’ll be getting the whole life skills experience here, but I thought taking a break from dashing to every highlighted quest objective ever would be a welcome chance of pace for myself and this column. So, what will it be?

Which life skills in Black Desert should I pursue? 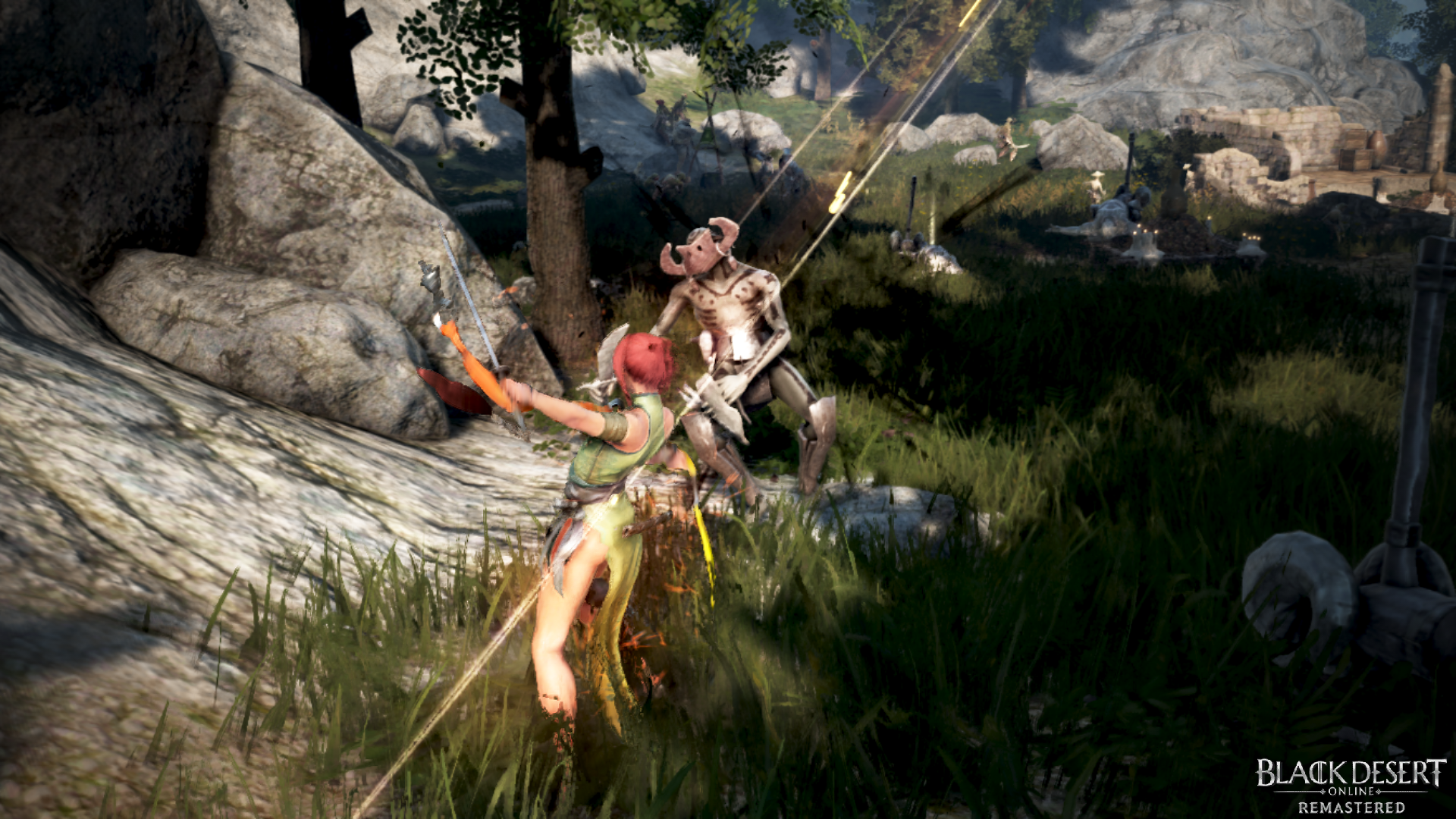 Like usual, polling will close at 1:00 p.m. EST, which point I’ll hopefully have gotten some more levels. I’m pretty sure I’m not going to make it to Awakening, but I’m hoping that I can make it happen. That said, I’m also looking for a more pastoral existence in this game’s world. Until next time!

Just play the game. I like the story myself.

“I am afraid of PvP” is one of the most common misconceptions of BDO. It’s simply not something that happens. I haven’t gotten ambushed by a random PvPer since well before they separated out the PvP focused servers. If you do happen to get killed all the penalties go to the PKer. You lose nothing. You can either keep fighting until the PKer gets bored, move on or switch channels.

Even then if Chris is on a new account or as a returning player he should be on Olvia and they removed PvP entirely from Olvia channels for those first 30 days.

LOL @ going to a BDO article and trying to start a tab targeting debate.
Troll someone else.

In between waiting for global cool downs while you mindlessly mashed button 1-2-3-4 over and over while pretending those 4 rows of hotkeys you never use is peak game design I’m sure you had all the time in the world to sit here on a second screen and type up how “superior” tab-targeting combat is.

The problem in this scenario is you simply speak with admittedly little knowledge on the matter. You’ve already quantified as your experience with BDO’s combat system to be non-existent. Instead you got what it took MJ of all people 30 minutes to do worth of experience and trying to pass that hot take off like you’re some kind of authority on the subject.

Couple hours to get to level 10, I think the problem is less the combat system (since it’s one of BDOs best features) and more the thing sitting between the chair and keyboard and their lack of understanding.

You might have a better time on the AIR forums trolling about tab target since it’s still a hot topic for that game. Good luck

There’s definitely much more challenging spots that will push your survivability but they come much later in the game. Your “Sword of Damocles” reference is on point and something a lot of people do with a game like BDO overly obsessing over the future and whether or not it’ll be fun instead of just having fun in the moment.

The story is…pretty bad. Even revamped. While there’s some measure of context of what’s going on in the world most of that is really hidden away in other parts of the game. The google translate nature of most of the in game dialogue/text does it no favors either.

Hunting isn’t really obvious on how to go about doing it. Fishing is overly straight forward, and great for AFK time. Alchemy can require odd components and can get very advanced very quickly but basic cooking is pretty easy if you got nodes setup. You might want to take a day to figure out how contribution, nodes and workers all work.

Dauntless adds in a random Escalation queue, new hairstyles, and a...