Every so often you just get to see a news story and think to yourself that this is going to turn into a major issue and fight in a few years. The news about the IRS using guidelines to indicate that Vbucks were a virtual currency is one such instance. Vbucks, for those of you who have made it your life’s mission to avoid learning about Fortnite, are the microtransaction currency used to purchase cosmetics and such from the in-game store.

It appears at a glance that the guidelines about virtual currency are at least theoretically in place to close off loopholes regarding converting actual currency to virtual form and using that for major purchases to dodge taxes, like gaining bitcoin via bitcoin mining and then using that to buy a car without ever reporting any of it. Of course, Vbucks are notably different from bitcoin, which means that the fact the guidelines were there for a time and have now been removed leaves the whole state of microtransaction currencies somewhat ambiguous on a whole.

Why Fortnite specifically to begin with? There are hundreds of IAP currencies out there in games.

It also sort of sounds like the IRS would like to figure out how to tax any IAP currency that you earn in the games by playing (or are given in-game for free). They think that’s something of real value that you are earning and that they’re not getting their share. I guess they can take a little bit of my IAP currency, but it’s not like they can cash it out of the game. The only thing the IRS could do with it would be to buy their own in-game stuff.

They think that the game is giving you IAP and you’re using it to buy a skin worth $20, so they want to get some money out of that somehow.

Maybe they’ll figure out a way to make the game companies pay them real money every time they try to let players earn IAP in the games just by playing. Which would only mean far less free IAP being given out.

The fact is that the games own my in-game stuff, not me. I can trade it, we can assign real values to it, courts can even get involved in high-value in-game theft and forcing people to return things, but it’s still all actually owned by the game companies. They can shut the game down at any time and it will be gone too.

We are borrowing the stuff on the characters we are being allowed to use while the game is there.

If there is ever a permanent game world that is promised to be up forever and that we actually truly own our stuff in it, maybe then the IRS can stick their stinky fingers in.

They already tax games like Entropia Universe where you can earn real withdrawable cash.

And of course this is the kind of thing they’d want to try to go after. Of course. My head aches.

Deleted? Ah, I see. I’m going to try that with my taxes this year too. I’ll just delete what I owe. That should work.

If you could cash out and turn the V-bucks back into real money, then I could understand the issue here. Anything you buy in game only has value IN GAME which means the IRS would have no reason to expect people to list “game currency” as a form of income. Because, V-bucks is NOT the same as Bitcoin.

…while letting the elephants legislate themselves tax avoidance havens all made of $3 bills and pork barrels. Perhaps it’s time to upend the entire system if you the IRS are really serious about getting money to pay for the nation’s coffers and excesses. Let’s start with those who are leaving behind the biggest foot prints first. Just saying.

…yeah, but I’m trying to get around the thorny issue of taxes being a necessary thing, while redirecting the burden of such from those who can least afford it. As well as from frivolous forms of game currency and bartering for the topic. /sigh

What in all the world did just read? Pretend money is real? 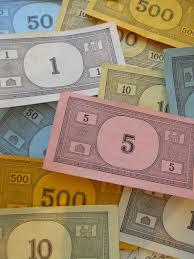 All money is pretend when you own a printing press :)

I’m telling you people ya’ll got no idea what level of implications of what you want to enable. These whole virtual worlds depend wholly and entirely on everything being completely valueless. I’m sure there’s people at the IRS just drooling at the idea of making all your earned virtual goods have value so you can be taxed on all that value you’re earning while grinding things out in these games.

Did you play for an hour and make $10 worth of cosmetics from the shop? Here’s your W-2GMR.

I’ve been saying that since the whole furor over lockboxes started up. Getting them classified as gambling is that foot in the door that any politician needs to start taxing you for in game goods.

Imagine the estate taxes when your permadeath character dies.

It’s an interesting line of thought, even if presented as a bit of a joke. While I don’t think estate taxes would be in order, do you have to report anything if value is deleted? Like if suddenly you had generated $50 worth of value, then lose it due to perma death would you have to report that? Or like gambling would you just collect a tax form at the end of what you ended up with?

Kinda reminds me of that guy that spent thousands on a sword in some game. Or the other one that spent an absurd amount on that egg that hatched and then he had no egg.

It’s why what I want is for gambling laws to be changed to be closer to the Belgium model, where the definition of gambling only needs the prize to have personal value without requiring monetary value. This allows to make lootboxes legally defined as gambling while dodging the whole issue of in-game assets having monetary value.

Though if making in-game assets have real world value — and, thus, be potentially subject to taxation — is what it takes to wipe lootboxes from the face of the earth, so be it.

Belgium didn’t really dodge anything no one has really tried to push what that law really means yet. Most of the gaming companies were easily able to just side step the country entirely with basically no losses so nothing really had to be challenged or tested yet. It won’t be until we get to a major country that goes forward with this that we will see a real test case at work and what that will mean.

The scenario of people looking to avoid having to pay into predatory schemes like lockboxes only to have to instead pay up to the government they cried to protect them is pretty peak schadenfreude. Companies won’t care one bit, they’ll just adopt another predatory model and pass all that right onto the consumer and tell you to contract your rep if you don’t like it lol :)

Man, who knew Ninja had so much pull with the IRS : P

LOL. Might as well classify chickens or some other barter item as a currency.

That is actually an excellent point.

Last I checked (a few years ago) you are supposed to track and report all of the barter transactions that you engage in.