It’s no secret that Norwegian games developer Funcom has been upping its profile in the online gaming world, building on its long-running base of MMOs with new games of its own and from other publishers. And with the Tencent buyout looming, it’s no surprise that the studio is planting its feet firmly in the realm of publishers with a brand-new company-wide launcher.

“We are introducing a new Funcom game launcher for Conan Exiles on TestLive. The idea is for this to be a platform where you will have easy access to the latest news, forums, DLCs and patch notes, without increasing the time it takes for you to enter the game. The new launcher will replace the old dialog box and instead remember your BattlEye settings (this can be changed at any time). It will also allow you to jump directly from the game launcher to where you left off in The Exiled Lands by pressing Continue, thereby bypassing the in-game menu. This works for both single-player and online games. The new launcher will not be a substitute for the Steam client, but will replace the current pop-up box and remember your BattlEye settings.” 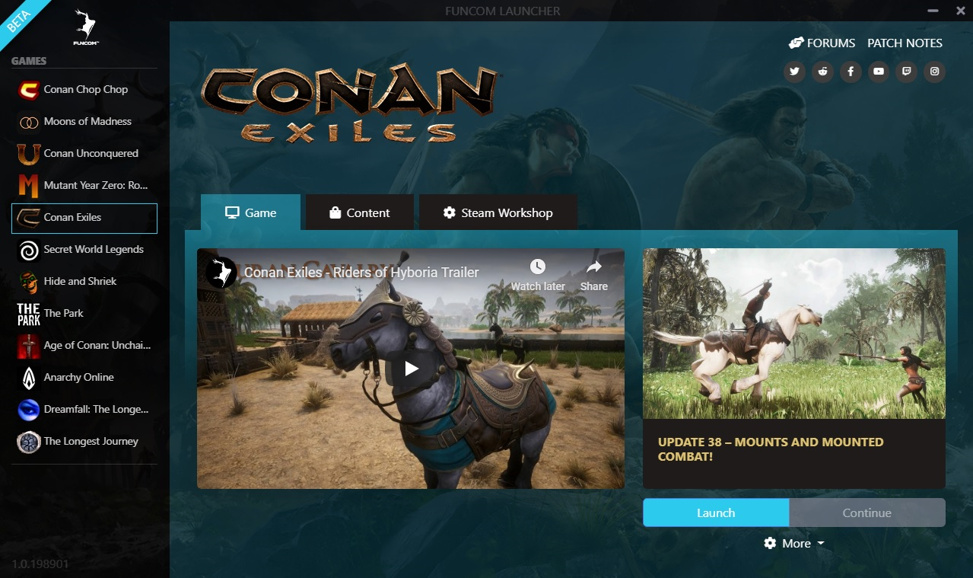 Of course, you can see in the pic that all of the company’s games are included, including at least one, Mutant Year Zero, from the other dev-house. We spy the many-times-delayed Conan Chop Chop in the build, too. Funcom is currently collecting feedback, and it’s about what you’d expect (because you know how much people love extra launchers cluttering their desktops).

The announcement for the launcher is actually dropped into a Conan Exiles forum thread previewing the followers management system, so today is all about the UI apparently.

And as for that Tencent buyout? The Chinese company is proceeding with that purchase. “Tencent launches its recommended voluntary cash offer for all shares in Funcom at NOK 17 per share,” today’s release declares.