If I made a New Year’s wish upon a falling star, it wouldn’t be far-fetched to think getting new content in Secret World Legends could be said wish. What better way than to make my heart flutter on Valentine’s day than granting that wish? In a world where you thought Funcom was done adding to the Secret World, even a small event comes as a welcome surprise. Hearing that my favorite horror mystery game was finally getting a little love felt appropriate for this season! It may not be much, but it is something. There hasn’t been new holiday content — nay, even new content period — in so long.

END_OF_DOCUMENT_TOKEN_TO_BE_REPLACED
Welcome to Rosenbrawl Open Week (which happens to be extended an extra week to February 24th!) New content, new pet, new emotes — what’s not to love? Well, there are a couple things. There is both love and heartbreak in Secret World Legends’ Valentine’s event. But hurry if you don’t want to miss out.

Tippy top of the what’s to love list is the fact we have a new mission. And not just any new mission, but a new investigative mission: my favorite! There can’t be too many investigation missions in the game for my tastes. While it still saddens me a bit that investigation missions have been watered down in this incarnation of the game, it is more appropriate in this case because it is a time-limited event. You don’t want to miss out because you got stuck on a step and the event ends before you can finish. 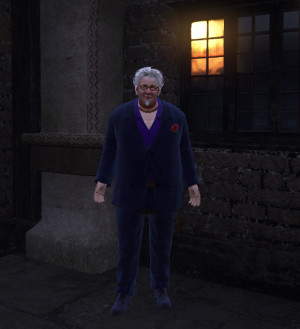 Also, I enjoyed the chance to check out the Rosenbrawl. This special PvP arena that utilizes only fisticuffs (a popular feature from an Egyptian quest players have long requested). Normally, players can enter only with an invite triggered by other players or rarely as reward for winning a Shambala match. For the event, all players level 15 and above could access it repeatedly just by buying a key in Tabula Rasa. I loved getting the chance to box others, and the three different boxing gloves with different abilities was interesting. Note: Be sure to try using all three! Oops, did I just break the first rule of Rosenbrawl?

As part of the event, you can also earn a free pet. Who doesn’t love a pink teddy bear? I don’t even like pink any and it is still cute and cuddly.

I can’t speak for the regular Rosenbrawl, but kudos to the SWL community for being so accommodating to players while the event was going. People were helpful and kind and even let you knock out your needed match when your lower level had some trouble.

And finally, I realized that there was an achievement involved in getting through all the traps without taking any damage only after I took damage. On my second toon! I just power healed through it the first time! This made me really sad until I discovered that you can just let the spell trap kill you off and start the chase over with a fresh achievement opportunity. You do not need to rerun the entire mission: Just /reset or die and keep going until you get it!

First off, the real heartbreak is that it is just one small mission – and a mission that will disappear with the holiday event, at that. Of course, once you puzzle out an investigation mission, it isn’t nearly as thrilling to run again anyway, but the limited-time nature means you could easily miss out on it altogether. This was helped quite a bit by the week extension that was granted on the final day. Whew!

While not a deal breaker, the whole timed aspect of the thinking component of this investigation was frustrating. While I managed to suss out the answer and get to the right spot just in the nick of time, the existence of the timer was an unnecessary stress. Why on earth is it there? I am sorry, but the countdown makes me think even less clearly, and investigation is all about thinking. I get too rattled with a timer and miss stuff. When I want high tension missions, I can go do sabotage and jumping puzzle ones; investigation is more cerebral and less anxiety-inducing. Sometimes you need time to work out a problem or see something in a way you hadn’t before. I really do not see any need for the timer there except to cause some inflation of emotions. Not a fan. Speed-braining was not what I wanted. As for the timed chases, that was fine and felt appropriate. 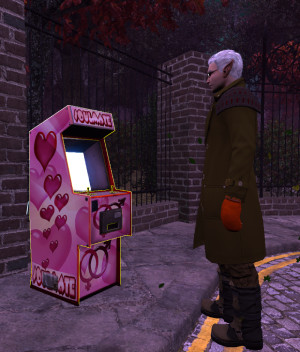 Love bugs are good, game bugs are not. Another frustrating factor was that this mission had some very annoying bugs that made doing it a pain. One was when you had to investigate the machine: You have to examine the box on the back by looking at a tiny slice of sidewalk in front of the Soulmate.

Another sad development was discovering that SWL now crashes repeatedly on me. I’d changed nothing but suddenly I was crashing left and right, a definite problem during this mission. When you crashed during the timed chase, you start over. And over. And over. I was pretty miffed one night as I continued to run into that at the worst possible times. Add the bugs to the crashing and running the mission became an exercise in frustration.

During my stream, one viewer noted that some players had a problem with new Nvidia drivers and also suggested dropping to DirectX 9 to fix the problems. The helpful suggestions were much appreciated, but the idea that in order to have a decent play experience in SWL we have to downgrade our experience on everything else by rolling back video card drivers was not. Others have also reported these problems and can’t find the cause. I know I hadn’t updated my drivers since Krampusnaught, and we didn’t have any issues then. Maybe once upon a time when there was much to do and much to look forward to, I would have considered this fix, but I certainly am not motivated to hinder other games for one that just barely got its first tiny morsel of new content in, what, over a year now? Funcom should fix that, not expect me to hurt my other games.

With the extension of the event, I wanted to add in a few tips and hints on how to make the most of it to get all the achievements and goodies. Achievement-wise, be sure to fight and beat a character with each set of boxing gloves. Also, run the mission twice and pick opposite endings, which give you achievements for each as well as an achievement for doing both.

For the timed thinking part when you need to count the flames, the vague hint is to not overthink it. I did and nearly ran the timer out! If you want a more obvious hints, you have to uncover the spoiler!

How to find your target - click to reveal spoiler!
All the info you need is right in that text. It says count the flames — right after telling you each of the flames. Don’t get hung up on going to places in the game and looking for flames (like I did!). 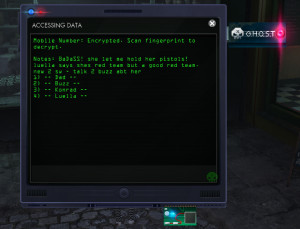 Now that you know the number, you just need to understand where you are when all this happens.

Getting to the target - click to reveal spoiler!
Where is this happening? Where is the Rosenbrawl located? You have the number, so you just need to go to the corresponding room in Tabula Rasa.

To get the pet is not obvious at all. In true Secret World form, you really have to dig and extrapolate. If time is running out, you can use the spoiler below to help you get it quickly. I am not completely sure if you have to have completed the Soulmate Arcade Machine investigation mission to get this, but it has the info on how to. You can try without doing the mission; let me know if it works if you do! If you only want a teeny hint, remember to read everything in SWL. Everything.

And about the pet... click to reveal hint!
If you are one who reads all the text, you’ll have gone through every option of the phone messages when you grab the dropped cell at the end. In one message, she is talking about being lonely and being visited by one who comforts her. The room number is directly in the text, as well as the action necessary. Be sure to be looking at the bed or you will miss it.
I still don't get it and want the pet - click to reveal another hint!
Go to room 2 in Tabula Rasa (remember rooms are named in Latin) and cry on the bed!

Articles like this makes me mourn the game that was and what the game could have been. *heartbroken*

Hearing about a new investigation mission made me run the patcher to check it out!
I would love to see more new missions in SWL but I also really did not “feel” this specific mission because:
* It requires PVP to get to the actual mission. Yes, it’s “just” Rosenbrawl but I still did not enjoy this bit and would have liked an option to skip this.
* It’s timed at every stage and leads to a scalable boss fight. This is not at all what I want out of an investigation mission and is indicative of SWL’s odd fixation on all things ilvl these days.
* The actual “investigation” part was a bit light. Please give us more things like the hieroglyph mission in Egypt or the brilliant mission where you play a series of text adventure games.

Anyway, it was bittersweet to dive back in after having entirely given up on the game… Would love to see some solid content made for this that anyone can access (no ilvl locking!), and would be happy to pay for such content. Go on Funcom!

I think it tried to cater to everyone with the one mission. I am glad to see content, but yes there needs to be more — and split up for the different types and not all mushed. Sadly, I think SWL watered down investigation missions period, so was this a result of that, or even more watered since it was an event?

Recently i installed the game and it kept crashing randomly, there is something wrong with it.

Edit: i tried to change settings, it didn’t work, and i’m not going to use older driver :-)

“Oops, did I just break the first rule of Rosenbrawl?”