If imitation is the sincerest form of flattery, then MMO players are the biggest flatterers in the world. When we’re not making avatars to reflect a heightened version of ourselves, we’re off making carbon copies of our fictional heroes.

Mysecretid seems to have this sort of thing well in hand: “I enjoyed the character of Visas Marr so much from my recent time playing the patched and restored version of Knights of The Old Republic II on Steam, that I was inspired to create her ‘descendant’ as a character in Star Wars: The Old Republic. Here, the visually-impaired (but Force-sighted) Miralukan Jedi poses — but her companion, HK-55, hardly seems impressed.”

Takes a whole lot of mass murder to impress that guy, let me tell you. 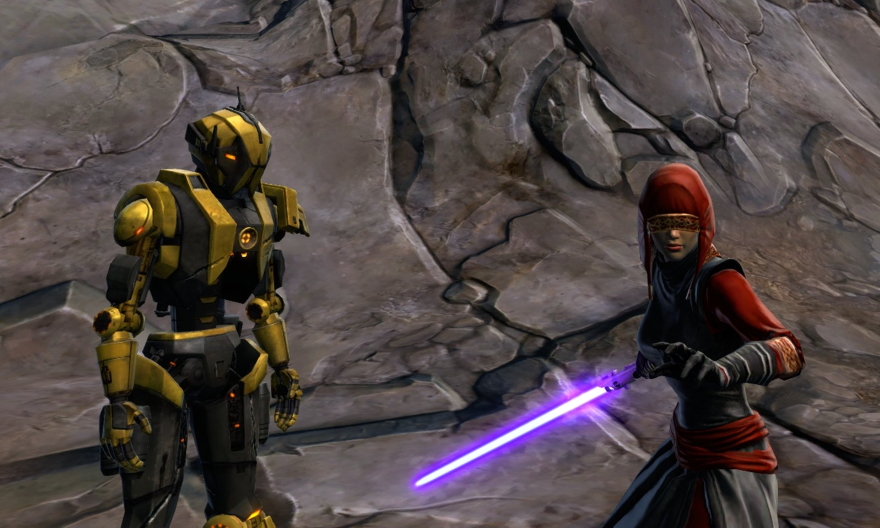 And if you can’t imitate someone in an MMORPG, you can sure as heck pay homage to them through the theatrical arts.

“The year was 2014,” said Amorey. “The occasion was a musical play me and my kin wrote and performed just outside Bag End to celebrate Bilbo’s Birthday in Lord of the Rings Online. The play was called There And Back Again. Awesome memories — not much of love but of friendship.” 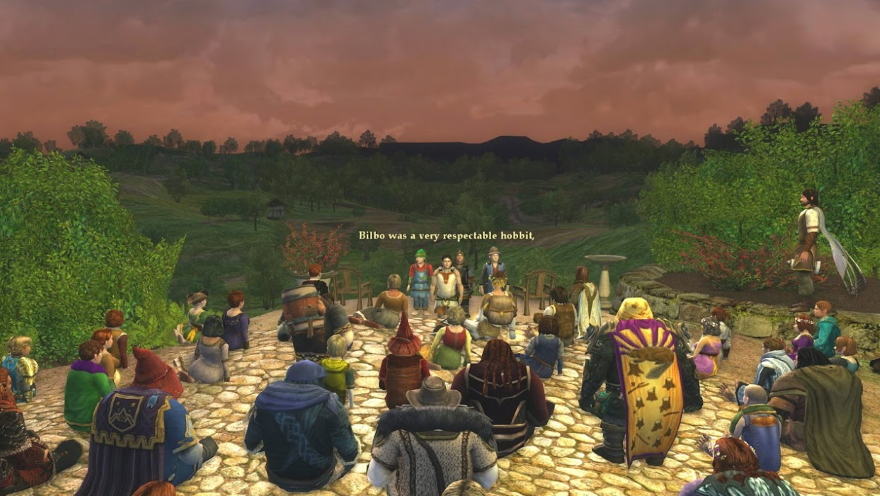 And while the rest of us are goofing off, Utakata is staging poignant moments in Blade and Soul that will win the MMORPG Oscars (when they are invented).

“Sometime it’s about those quiet moments where all the world seems to have gone wrong, while you still have something precious and hopeful to sit or stand by and protect,” said Utakata. 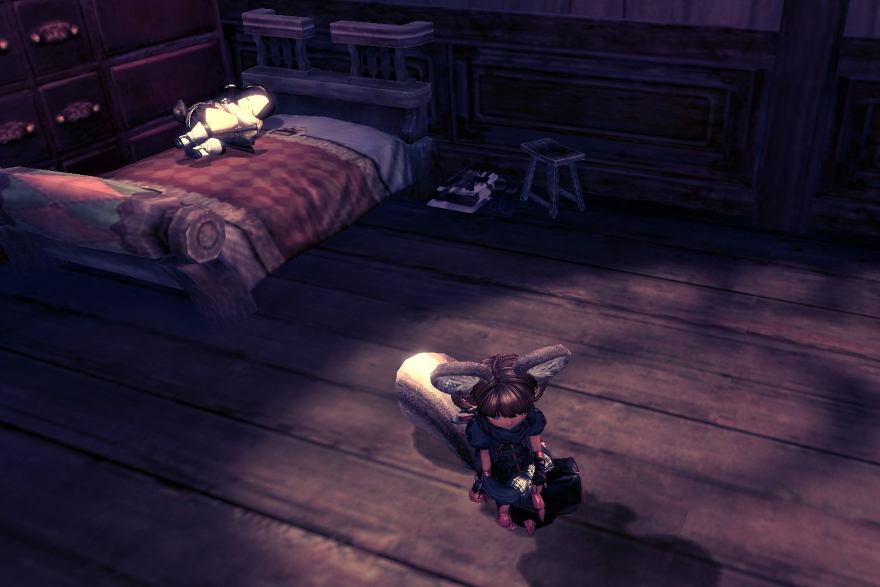 When you’re done admiring others, you can always pass the time striking up a dramatic pose and admiring yourself. Vincent makes glamour (and fashion and fame) look amazing in Final Fantasy XIV.

“A moment of peace and reflection before the chaos of patch 5.2 hits,” Vincent said.

Yes, that’s how others find me when I’m reflecting, although I’m probably holding a cheese danish instead of a fancy staff. 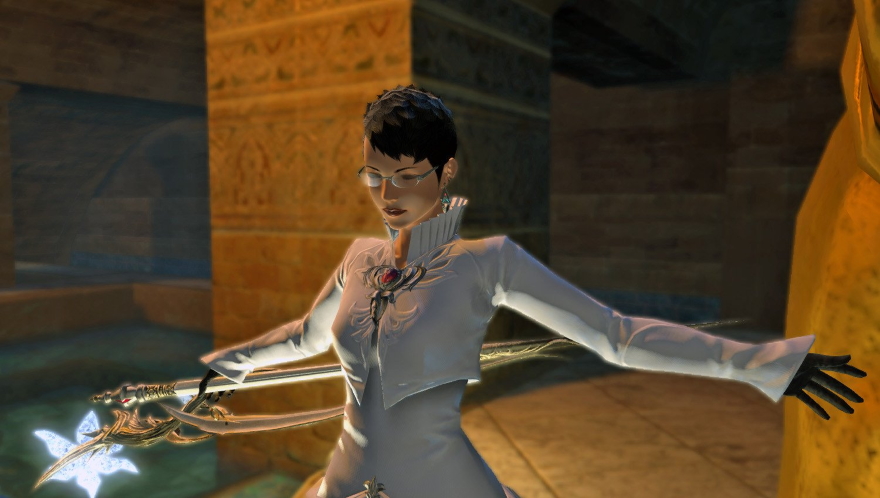 Why do superheroes come up with such fantastic costumes, if not to be admired and imitated by all? Hikari is definitely not infringing on any copyrights in City of Heroes: “Her hero name is Spectra-Lass and her powers are Green Lantern/Rainbow Girl inspired.” 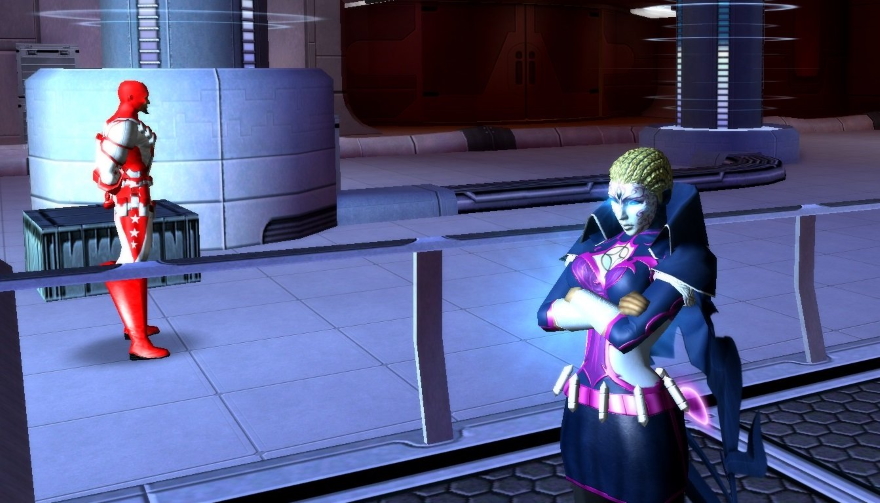 Now our tale is about done, but yours is only beginning. For this week’s screenshot challenge, see if you can’t make Massively OP’s mascot, Mo, in an MMO character creator! Here’s a good reference to help you get started. Or, of course, you can post any picture and story from an MMO that you want!

Hmm. Well, unfortunately, at this point a Mo like look isn’t an option for a Lyn in BnS. But never say never as new outfits and looks come out all the time. But… well, little Lyns just don’t make good knights white or otherwise.

However, they do make good assassins now. That’s right! Another fun class for the Lyns!

So, here is mine. His name is Foliey and his is very low level at the moment. And yet he looks great even if his killer stiletto is almost as big as he is. And yes, this is about as small as a Lyn can go. So look out, because I can hide in the short grass and ambush you. Heh.

…he’s so small i can’t see him on my Friend’s list when you are playing him. >.<

Lol. I’ll send you a friend request next time on.

Weird that you couldn’t see me though. I wonder if you have to be at least a certain level to be able to send and receive requests. I know they locked that down before to stop gold spammers.

I think I can see all your characters when you are on as the Friend’s List based on account I believe. But it’s more likely you weren’t on during the 11:00 pm to 2:00 am time slot I am on. Sowwy. >.<

Be it jet setting around exotic planets or making it rain on the Golden Yacht, Everyone’s crazy ’bout a sharp dressed Mo.

There is a way to make your mascot in FFXIV – get Heavy Iron Armor set for Paladin and use Turquoise Green dye to color it.

I would show but my account was recently locked. Apparently someone from England tried to log into it. People who play FFXIV, make sure you always use authenticator.

I think Mo will be a Manderville … eh .. person?! i’m both happy and sad that i did all Hildy quests in ARR, now i have to reach next expansion for more silliness.

MY SWORD IS ON FIRE !

I studied some military history at university, and appreciate the effort for historical accuracy regarding gear in some of the genre’s lobby/looter shooters (e.g. War Thunder, Ghost Recon). I admit to being more a dilettante, however, so I’ve no trouble using mods in World of Warships to take the boats out in style.

Some days, some nights, some live, some die…battle cry…

PS: And thanks for putting the MOfu mimi back into MOp with plugging another of my pic again, Mr. Justin. <3

For some reason, the site won’t let me post any screenshots. Ah well, maybe next week. Thanks for the shout out this week.

…I post directly from my machine and not use 3rd party image hosts instead. And I am assuming you are not using the more direct route. But if you are and still having issues, you’ll have contact staff to help resolve them. I hope this helps.

Thanks, they magically appeared (see below) hours after I posted them. Strange.

Ocean fishing is the new endgame and the new crafted dps gear is ace. So say we all. LOL :)

One of the raiders in my FC had me craft the Neo-Ishgardian Caster chest for her to use for glamour, even though she’s already got better from her raiding. She still loved the look enough to want the piece. I don’t blame her — it’s lovely.