END_OF_DOCUMENT_TOKEN_TO_BE_REPLACED
You’ll likely notice that I missed out on last week’s Choose My Adventure and for that I apologize. This past week I have been fighting off some sort of a virus that wasn’t the flu but certainly laid me out like one. That, naturally, bit in to a lot of my play time in Black Desert. However, once I was not seeing things through the haze of medicines and bleary, sleep-deprived eyes, I was able to get a bit of a handle of the life skilling in the game. 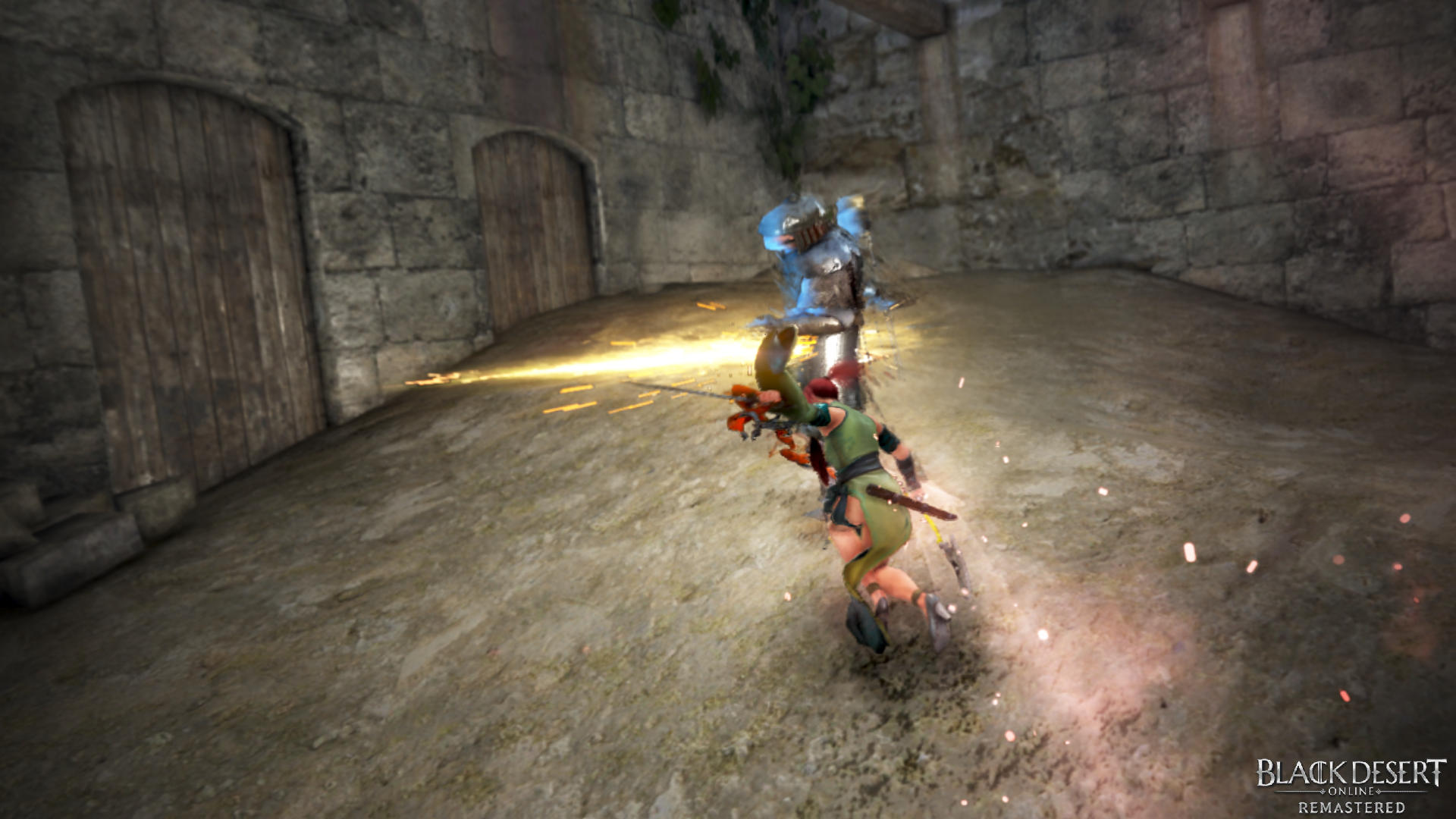 First things first: I got sucked into the game’s combat again. Especially because I gained a few more levels, which opened up a few more skills for me to use, which opened up a new combo path for me to learn and play with. This one actually took a bit of muscle memory time to get down, but it feels like an even better single-target series of buttons than the other combo I had discovered. It also had the added benefit of knocking the foe up into the air, so most of the time I end up killing the target before they can even land a shot. It feels like a particularly useful combo when facing a big boss monster, but then again I assume that those monsters don’t get knocked up into the air too easily. Maybe someday I’ll be able to see.

Before I knew it, several hours had wasted away and I had to remember that I was being told to learn how to cook. But there weren’t any quests that led me to a cooking trainer. I started to look around in-game for something I missed, some sort of UI element that maybe I had forgotten about, and that’s when I remembered I had a toothy black cloud for a friend.

The Black Spirit has his own quests in the mobile version. Surely, he has some in the full version too, yes? Yes, he does. But they didn’t guide me to anything about cooking, they guided me to fishing! This was a quicksand trap, y’all. There are few things I love in video gaming and MMO gaming more than fishing, and I was ready to follow the path and cast a line.

Once I figured out just what sort of steps I was supposed to take to get my fishing rod, anyway. 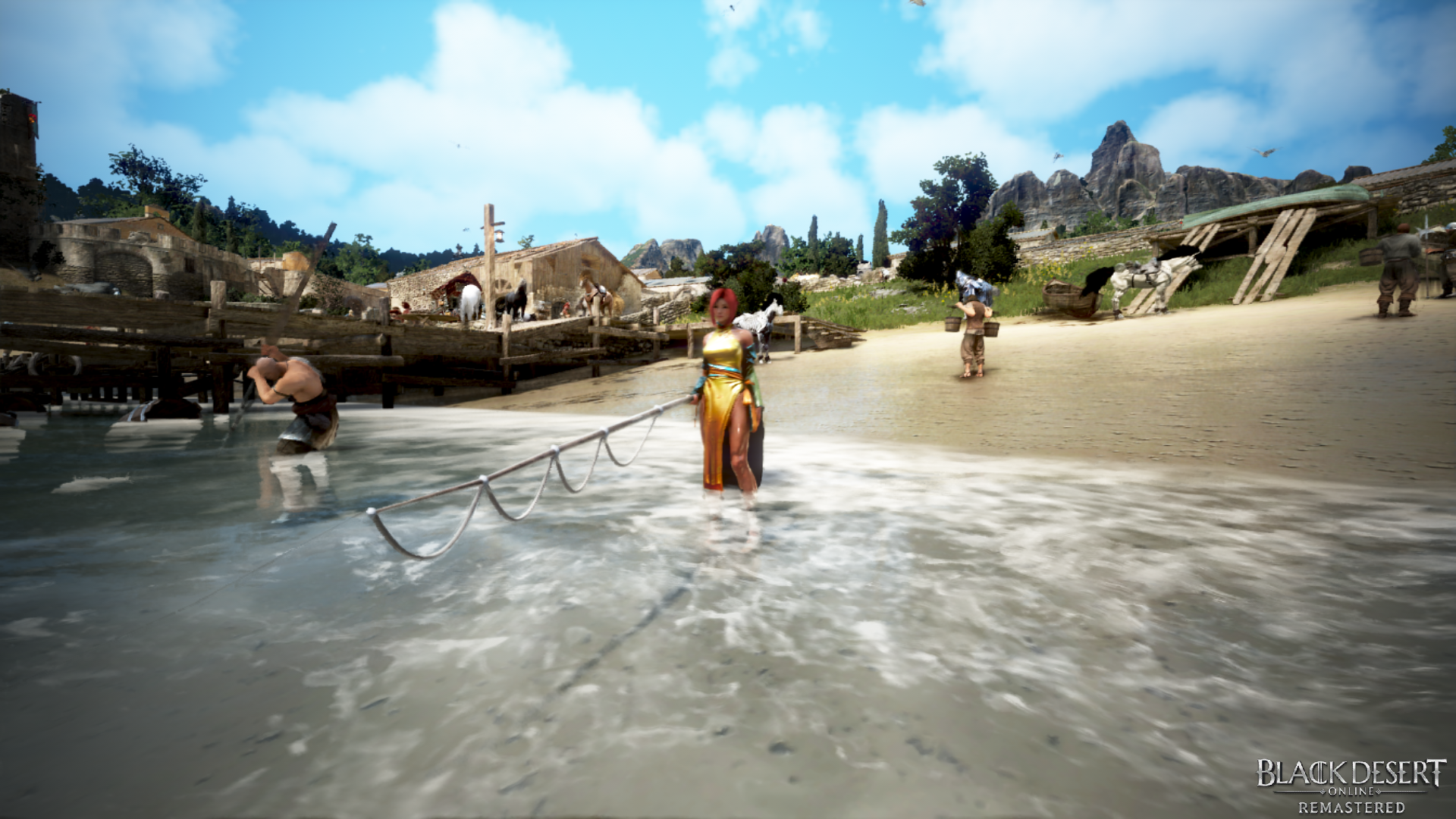 Another number of hours disappeared as I learned how to fish as my inventory began to fill up with bunches of starter fishes from the nearby ocean. Then the Black Spirit guided me to the ability to dry fish. This was almost like cooking, right? And hey, it means the fishes I was catching would stay in my inventory longer, apparently! And then the Black Spirit led me along to a chef who led me to another NPC who led me back to the chef…

I was getting distracted, clearly. So I did a bit of research. Turns out, apparently, I need to buy a homestead and buy a cooking utensil station in order to cook. But I didn’t have enough money in order to get a little place to set that up. All these fights and rewards I was getting and I was sure I would have had enough silver saved up to get something resembling even a basic little house, but it looked like things were too lean.

So I salved my wounded soul the best way I knew. I picked a few more fights using my new combo and I fished some more. At least these things I figured out how to do. 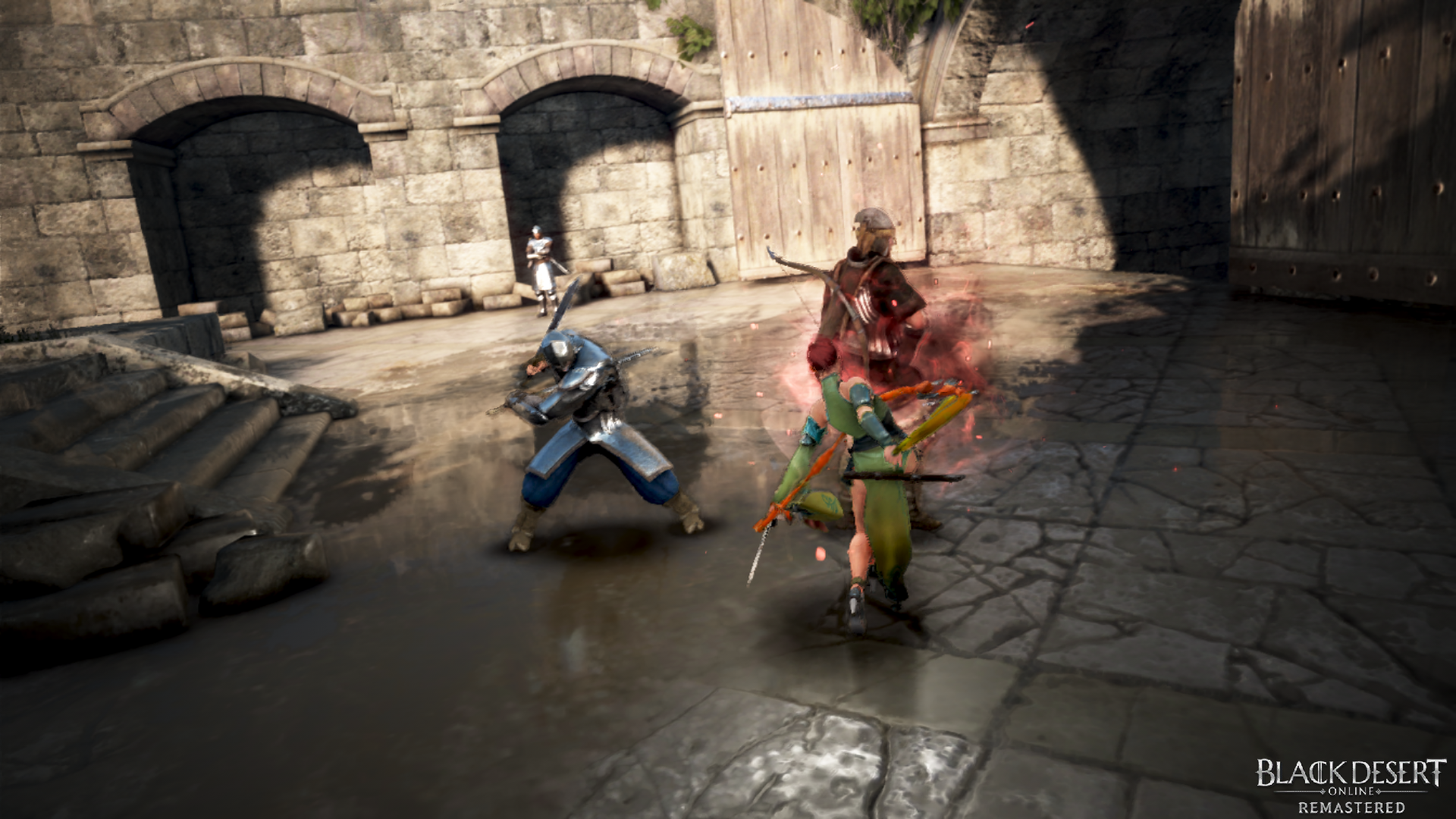 It was at this point that I started to realize a couple of things. One, Black Desert has a whole lot more depth to it than I had first supposed. I haven’t even been able to really scratch the surface of what my character is capable of, let alone other mechanics like deeper life skills, or hiring workers, or whatever Node Wars freaking are or what passes as end game. It makes me extremely eager to blitz through these few levels and figure it out.

But that also leads to the second thing I realized: This game doesn’t really seem to onboard new players very well. At least to the deeper mechanics of things. The mobile version of the game, in comparison, has a much cleaner curve of layering on additional systems to make you feel self-sufficient, as well as has a bunch of UI elements reminding you of the ways you could improve and progress. Black Desert on PC, by comparison, feels very hands-off in its tutoring to me. I had to remember that the Black Spirit had quests. I had to remember that empowering gear is a thing. The longer I play this game, the more intriguing and confusing it is in equal measure, with more systems and things to do and none of them really well explained.

I see this game becoming something of a pet project of mine that I dip in to now and again as I stubbornly try to figure things out under my own power, but for the purposes of this column, our time in Black Desert is over. I’ll have some closing thoughts next week, but for now it’s about time for us to find some new pastures to pursue!

I’ve got a couple of different games in mind, and none of them, frankly, fit any sort of individual mold. These are just titles that I’ve got a passing curiosity about trying out and I’m sort of hoping that others who read this column will be intrigued to follow along and guide our steps. So, in no particular order, here’s the games I’m considering for March.

What game should we head towards in March? Choose My Adventure! 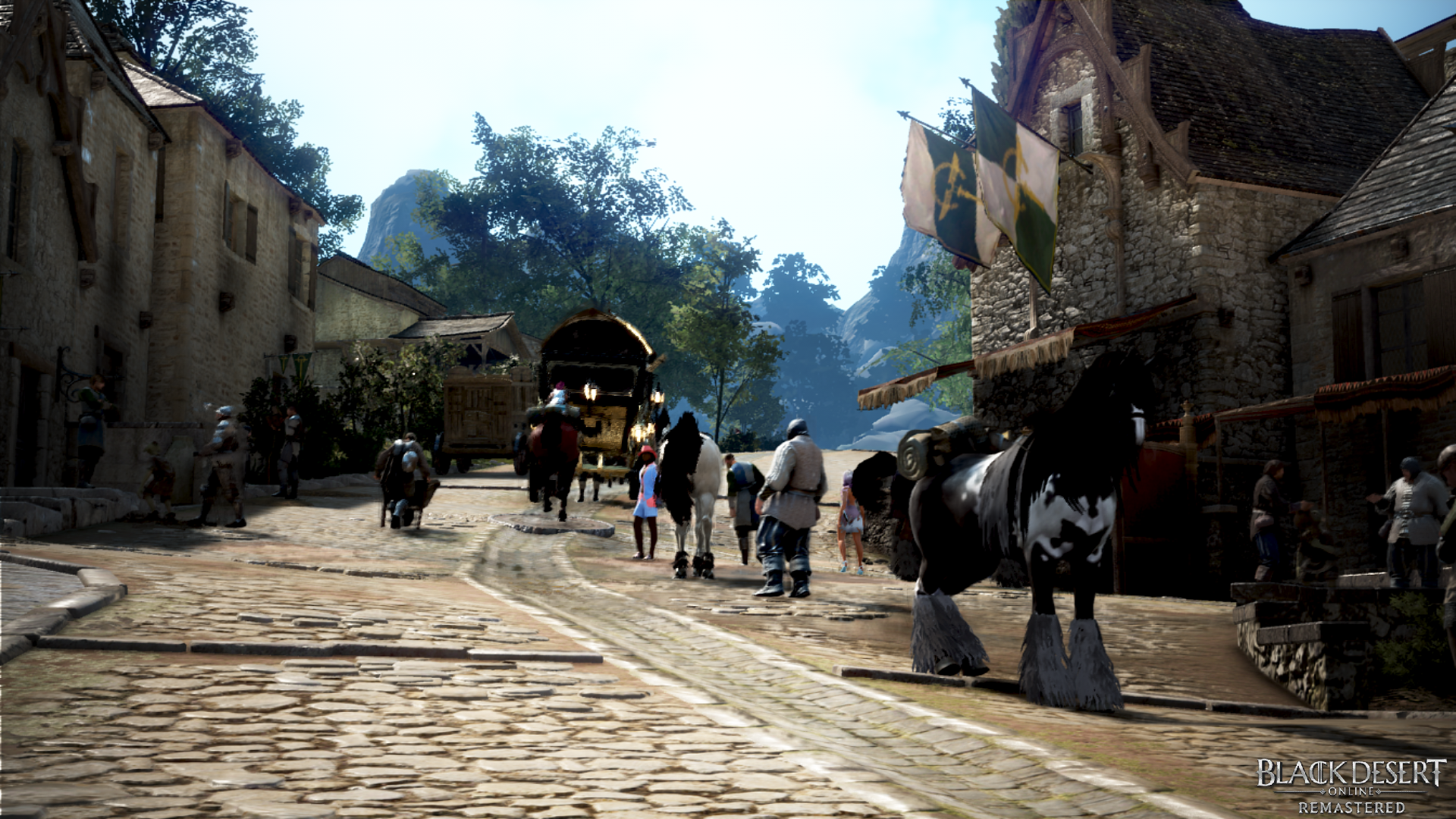 As always, the voting for this round will wrap up at 1:00 p.m. EST on Friday, March 6th. In the meantime, I’m probably going to log in to Black Desert and do what I do best: fish and slap people with a needlessly deadly belt buckle.

Yea BDO is pretty rough on explaining the other aspects of game play beyond just the basic combat. This is what I meant when I say Mobile is basically a different game and almost an improved version of what they wanted Black Desert to be for many of it’s in game systems.

The Black Spirit does have a Guide (under “Guide”) for “I want to learn about Cooking” that will take you to places but unfortunately the game also simultaneously filters out Lifeskill Quests by default (presumably to not overwhelm you as there’s at least 100+ Lifeskill quests around the starting region). This makes learning about a lot of the game basics pretty confusing for sure. Turning on all the quests to show up will make whole towns light up with quests to do and work on. This is actually a big goal in game for some of us, such as I’m at around 15000 of the 30000 Adventure Log objective.

As I mentioned in the previous CMA before you can get into cooking you have to get ingredients and that means you need a source getting you said ingredients. While a few in game areas exist to gather said ingredients it’s far more efficient to either have your own workers or buy the materials from someone else which means getting into nodes and workers.

What’s great about Black Desert is that if you take the time to learn some of it’s depth, the biggest thing you’ll learn is how viable it is to play any way you want which is just something extremely rare in the MMO genre. I pretty much play this game 100% like it’s Farmville just managing my workers, processsing materials, ocassionally alchemy/cooking, and AFK fishing and have great income. You can also just eschew all that and just kill things and have a good time.

Yea, I think I confused contribution points and silver. This game is deliciously complex, though. I really need to focus more. Particularly when I’m not under deadlines. And sick with some viral awfulness.

When I first started back in 2016 and was playing it full time I used to have to actually schedule what I was doing in the game each night. Monday I would work on getting maximum Energy. On Tuesday I would grind quests and get contribution. Wednesday I’d work on a particular Lifeskill. Etc. It was just all too much to take in and do at once if you want to do everything.

Black Desert has a very steep learning curve. The game itself is a marathon, not a sprint. You could not possibly fathom the complexity and depth of BDO until you’ve invested a few hundred hours into the game. This is where you made your mistake. You cannot be impartial if you don’t give it a chance. You can’t go to that game, play a few hours and write a review about it. You just can’t.

As a long time Veteran of BDO I would highly recommend you download Discord and join a small guild. The game, being a typical Korean MMO, is hard to understand. You really need a veteran player to guide you through it. And to ask said player to type everything and stop their gameplay to answer questions would be rude. So voice chat is my recommendation if you want complete and understandable answers to your questions.

FYI – houses in BDO are not purchased with money.

I agree. It is a very complex game with a steep learning curve. All the systems are interwoven with each other.

Also, you don’t need a house to cook. There is simple cooking right from the interface. But having a house you can actually cook in, is cool. And you can grow you own food to cook in a garden.

Well, without a stove inside your house your ability to make most foods is restricted. So to make good food you do need to get a house and stove. and yes, gardening is boring but will help your cooking move along without being hindered by a dry market on certain crafting materials.

Alchemy also requires a machine in your house. Simple alchemy (without a house) will allow you to make some basic heal potions. But for more advanced stuff you have to invest in your alchemy machines and your house.

Those are the only two tradeskills / lifeskills that require housing. Everything else is either something you can do while AFK (fishing, horse training, processing, gathering, etc.) or your workers craft items for you in cities.