Care to see what’s next for the rogue server of City of Heroes? Then get thee hence to the game’s test server for a look at a new Origin power pool, a new Support powerset, and some new IO sets. After you get over the awesome weirdness that is realizing City of Heroes is getting actively updated again.

The new Origin power pool is known as Experimentation, which actually is a pool that was being tinkered with by Paragon Studios back in the day and has been brought back by the Homecoming team with their own polish. The power pool involves using experimental toxins, injections, and other related science-y ephemera to either buff yourself or hinder others. (Everyone can use this pool, but you can only dip into one such special pool at a time.)

Defenders, on the other hand, are being treated to a new Shock Therapy powerset that utilizes the benefits of electricity (comic book logic) to heal and buff allies (don’t think too hard), with the added wrinkle of managing a Static resource. This powerset is available only to Defender primaries while it’s being tested, but the devs say they’ll port it to the other support-esque archetypes “after testing and feedback.” Check out the power breakdown: 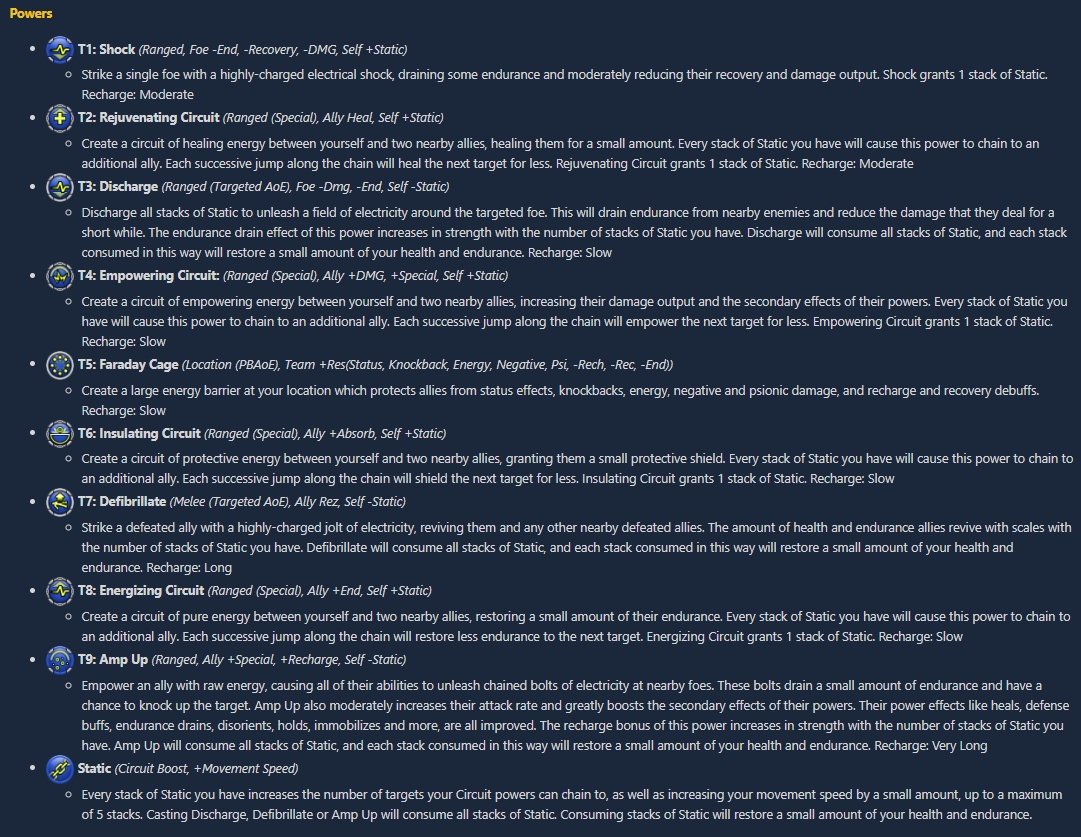 Finally, there are new IO sets to try out on the high end of things, some adjustments to the Dark Melee powerset, and a few other miscellaneous adjustments as well. The latest beta patch notes have all of the information you need. Also, read this to get started on joining the test server itself.

I guess i am part of that minority that wants powers, or more accurately visual effects, to be detached from your role in the game, tanking with the power of butterflies and healing with bullets shouldn’t really be a problem.

Yeah, there was a poll that showed the majority of respondents wanted more costume options. I was personally split between more powers and new content.

Electricity makes more sense as a healing source than most other things we see in games. It can be used to defibrillate a heart, to prevent muscle dystrophy, to cauterize bleeds and even to treat serious psychiatric conditions. So at least 4 legitimate things which easily beats something like holy energy :)

Love seeing all the new ideas!

However, the push for a meta of AOE damage above all else is deeply concerning. All buffing and no nerfing makes for a boring and eventually dead game.

NCSoft should seriously get back into this game. CoH is obviously still loved by the fans enough to be profitable.

I think having NCSoft involved at all (other than to give official blessing) is precisely what is NOT wanted.

Best to have that blessing than not, eh?

Outside of an approval / official removal of threat of shutdown I hope ncsoft stays away too. Let the COH guys have the community and product they threw away.

Got to hand it to Homecoming (that’s where I play too), they’ve really been doing a decent job with keeping the game alive and interesting!

Massively on the Go: Pokemon Go’s Season 2 is Legendary

The Stream Team: There will be fire in the mountain when...

Massively Overthinking: Are MMO chat bubbles the best thing ever or...

Albion Online launches the Call to Arms update on March 17

Sea of Thieves kicks off a three week-long Festival of Fishing...