This week was all about following the rest of the breadcrumb trail in Albion Online to see where it led, and I recall one of the comments saying that there wouldn’t be much left. I assumed that meant I had at least a few hours or maybe a day’s left of things to follow and learn, but the pathing was over within an hour.

It was a pretty straightforward quest that I was given: Head to a camp, talk to a guy, kill a number of other enemies, and then go back for whatever reward was waiting. This happened a couple of times and helped me make sure I knew how to get from point A to point B, so overall it was a fine enough tutorial.

And then, it literally cut away and said, “You’re on your own now,” as pictured below. 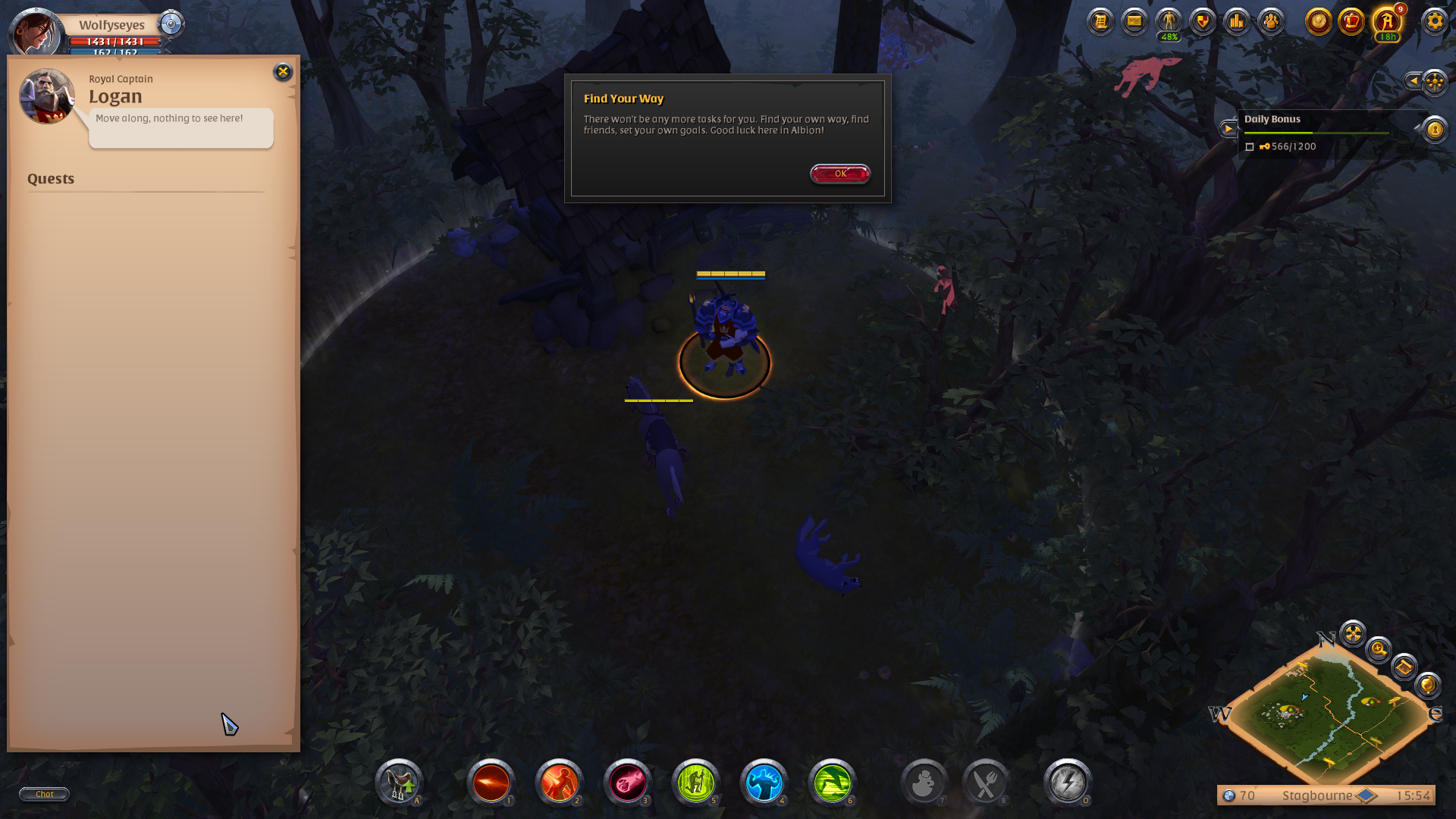 I was legitimately impressed and surprised by the brusque nature of this little alert. Most of the time, there feels like there’s a weaning off period, but this was the coldest of turkeys. It wasn’t letting go of your hand so much as cutting off the hand you were holding on to and running away giggling.

All right, so I’m on my own. Time to work towards the Pyromancer staff. After all, that was the staff that people voted for (I’m surprised the voting was as close as it was, honestly; people have strong opinions about magical staffs, it would seem). A look at the Destiny Board, however, was the source of another shock for me: the sheer number of points I was going to have to earn to get to that tier of mage staff and beyond.

Up to this point, unlocking things on the Destiny Board didn’t feel particularly daunting in terms of time commitment. Once more, though, the weaning off did not happen and I was left facing the stark reality of the task that was chosen for me. The grind, it would seem, is going to be very real. Or the long-term goals are very real; it’s all a matter of perspective, really. 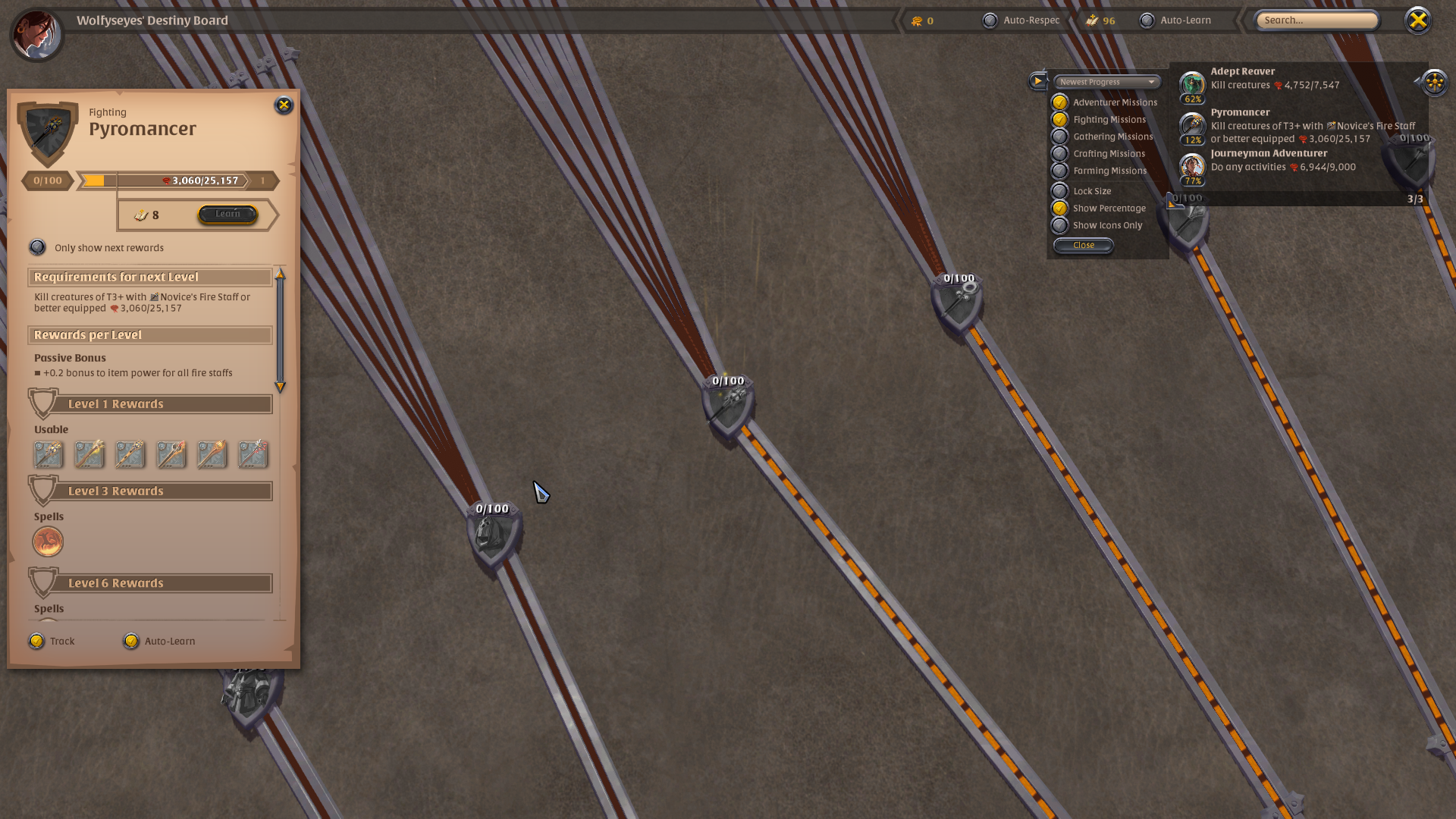 So it goes without saying that I’m probably not going to get to Pyromancer before the end of this month, but darn if I’m not going to try. After all, running around and tossing fireballs at enemies is pretty entertaining, and so far the fire staff/heavy armor build that I’m using has been holding up just fine. It’s nice to be an iron cannon instead of a glass cannon for once.

I am curious on how to advance and strike out to new realms, however. A lot of the time, I seem to be sort of “staying in my lane,” keeping to the two or three safe areas and just sort of trundling around the world of Albion. But that trundling has certainly unlocked a couple of things. For example, I found a couple of random green portals just hanging out in the world. The first one I was unsure about, but the second I went ahead, took the plunge, and entered. Possible PvP be damned, I was curious to know what secrets were hiding here!

Turns out there were no secrets. Presumably, this mystery area I was transported to was already cleaned out by someone else. Or at least, I was assuming as much as I ran around without finding a single fight. And then I found the huge empty treasure chest and that pretty much confirmed my suspicions. 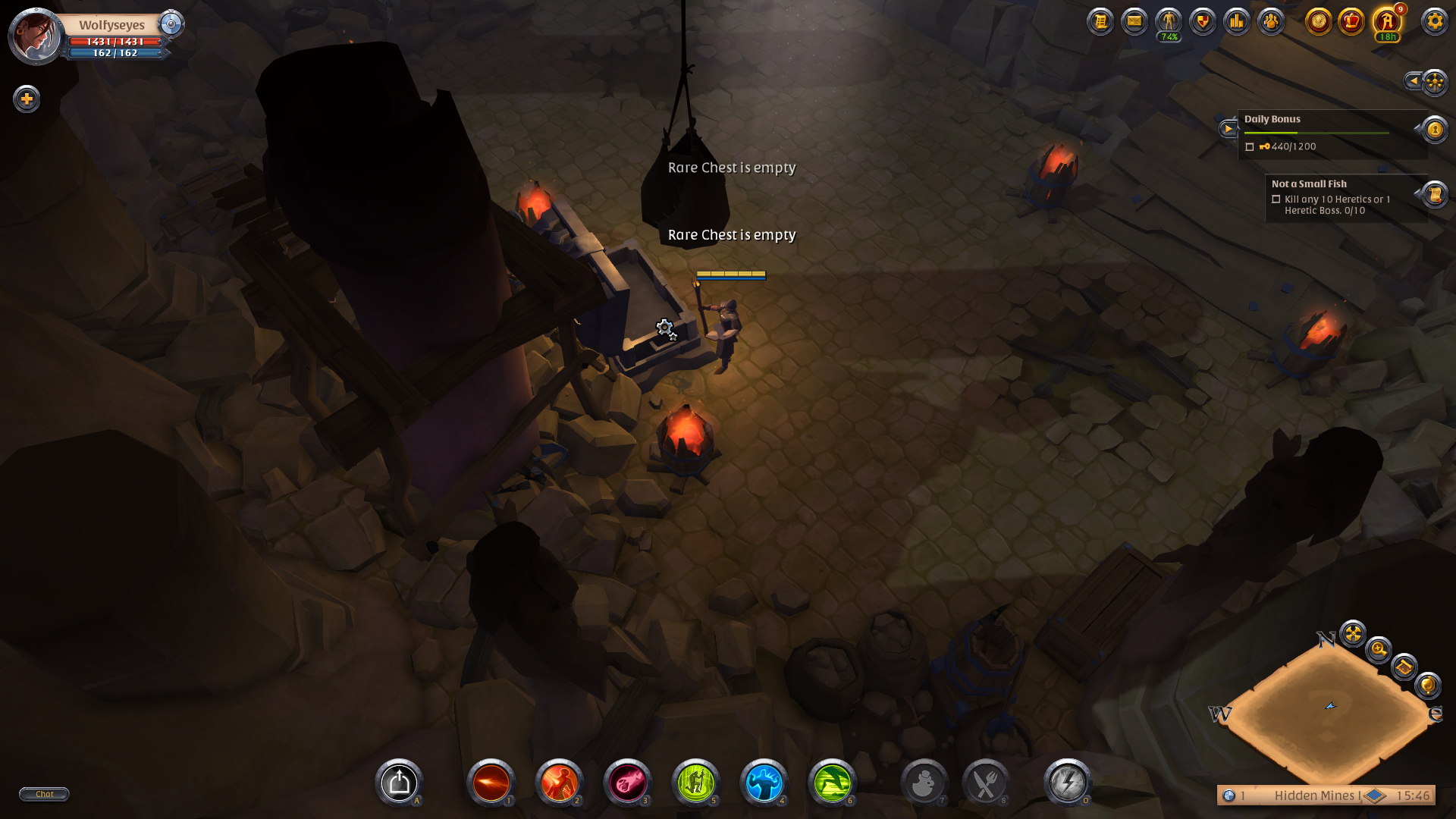 It is a shame that this hidden thing isn’t instanced, but at the same time I can appreciate why it’s not on some level. Being the first to find something is always awesome, after all, and if you’re the first to find a big treasure chest full of stuff before anyone else, all the better. Perhaps in my wandering I’ll be so lucky.

Wandering is about all I was doing for a while, though, making my way to what I assume was the capitol of the area that I was in currently. Boy is this a central hub, alright. I adore the feeling of ambient multiplayer where you’re in a bustling public area full of players doing things, and this town square was just silly with people. People and their mounts. Practically everyone was wearing horse pants. I would have joined in, but I’m embarrassed by my donkey pants.

It was in this capitol that, emboldened by my entry into a random portal, I decided to head into another big portal in the city center. Turns out, this was a personal instance – an expedition, to be exact. While this little jaunt through my very first expedition was a very literal guided tunnel, it actually was a fun little challenge, rewarding a fair amount of silver and making me pay attention in combat. In fact, at one point, I was fighting a mini-boss that was laying down attacks with uniquely shaped telegraphs to avoid a la WildStar. Really, anything that reminds me of that game gets an A+ in my book. 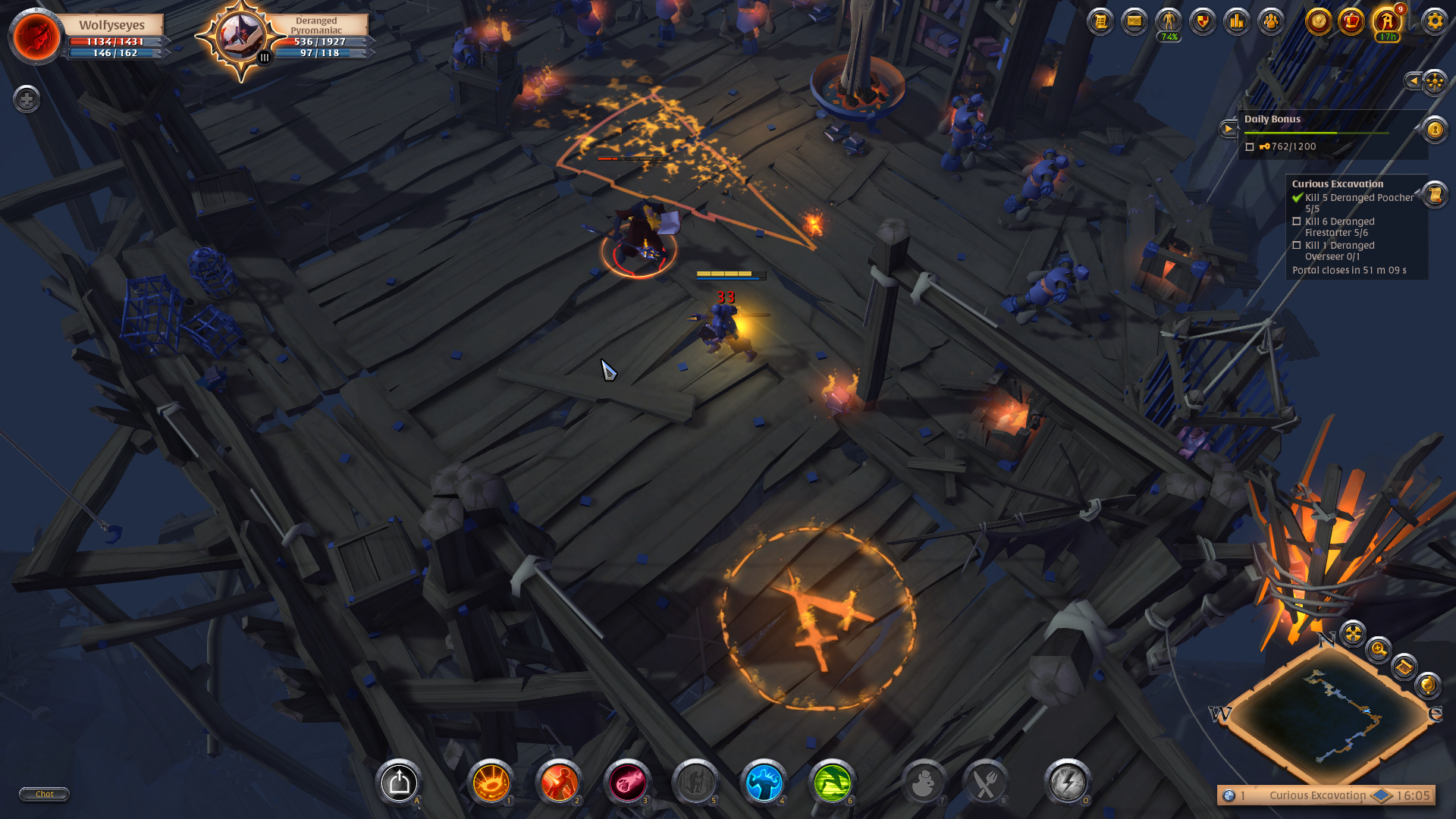 With that all said, though, I am now at a loss on what to do next. Roaming seems to be feasible, but I’m hard-pressed to push my luck into the yellow zones without really getting an understanding of my gear and gauging how dangerous enemies are (I was pressed by wolves at one point). On the other hand, there are random green portals full of treasure to find. But on the other other hand, expeditions seem like the kind of thing I could do to grind out the points I need in order to get to Pyromancer and the next tier of kit. Maybe.

In short: I need help. So consider this week’s poll something of an expansion of one of the polls that were offered last week. This time, though, it comes with at least a little more knowledge of a couple of the things I can do! Unless, of course, I’m completely missing an obvious activity, at which point you’re welcome to post that in the comments. In any case, here’s the poll:

What should I be doing next in Albion? 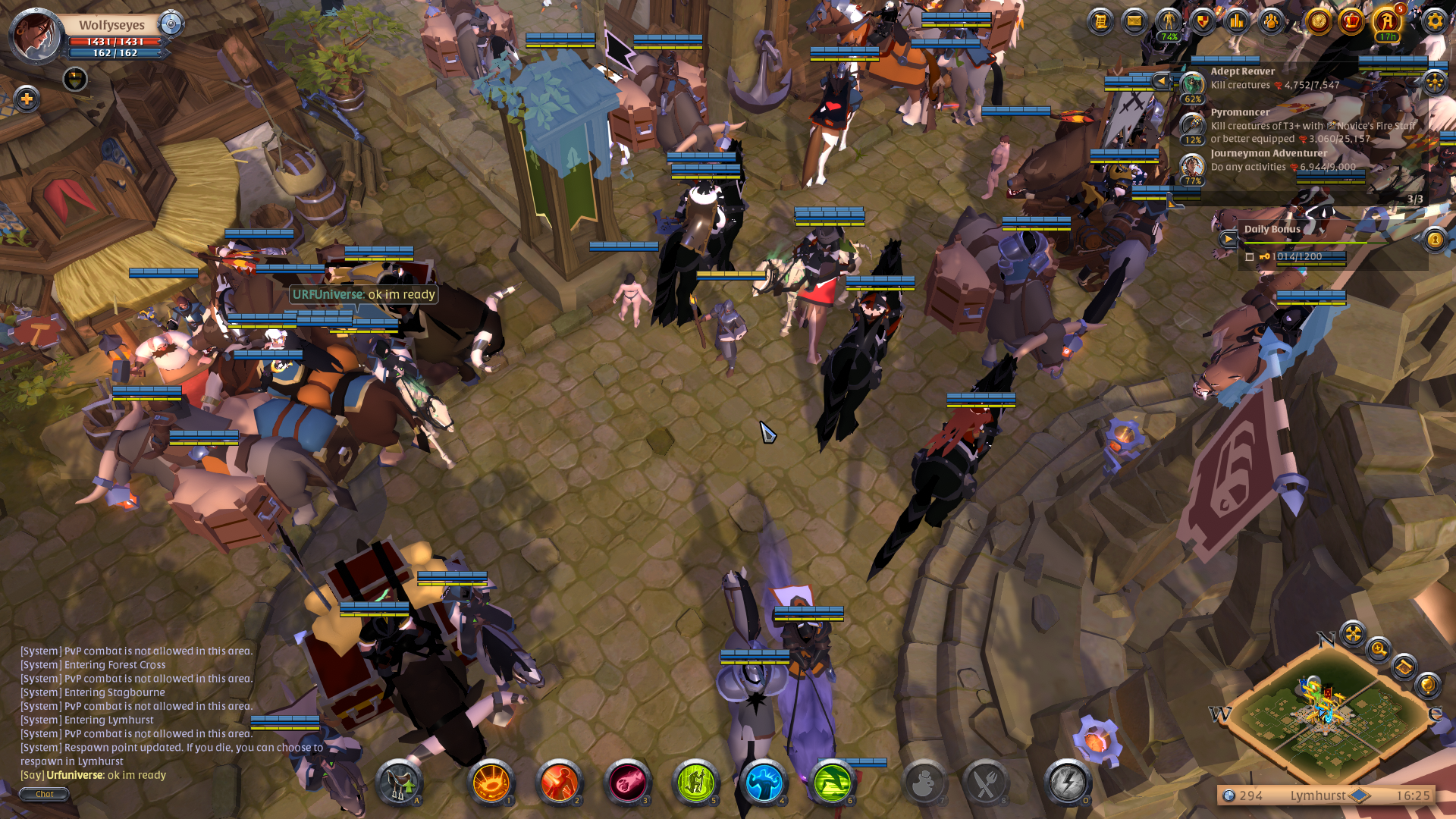 Polling will wrap up at 1:00 p.m. EDT as normal this Friday, March 20th (aka Animal Crossing Doom Day). I promise I’ll look up from both of those games to keep eyes on where guidance is going, though. And I’ll do what I can to try to rake in some more points and inchworm my way to Pyromancer. Until then, I look forward to your guidance.