OK, Albion Online. I get it. You’re a tough guy. You see a soft, doughy person like me and decide to lull me into a sense of complacency, offering adventure and teasing me with advancement and giving me just enough of a taste of the carrots on a stick before you decide to hit me with a low blow then uppercut me into unconsciousness. That’s fine. It’s fine. This is fine.

Needless to say, my time in the game was not exactly fruitful.

It started off simple enough; the voting results were to roam the world and perhaps see if I could find one of these unspoiled dungeon entrances, and I was more than ready to see if I could complete the task. I elected to follow what I assumed was a generally safe path from the town I was in to another that seemed interesting. Mostly because it was in a frigid area and I love snowy and cold landscapes. Also, it sounded vaguely Dwarven and so I wanted to see what Albion’s interpretation would be like. 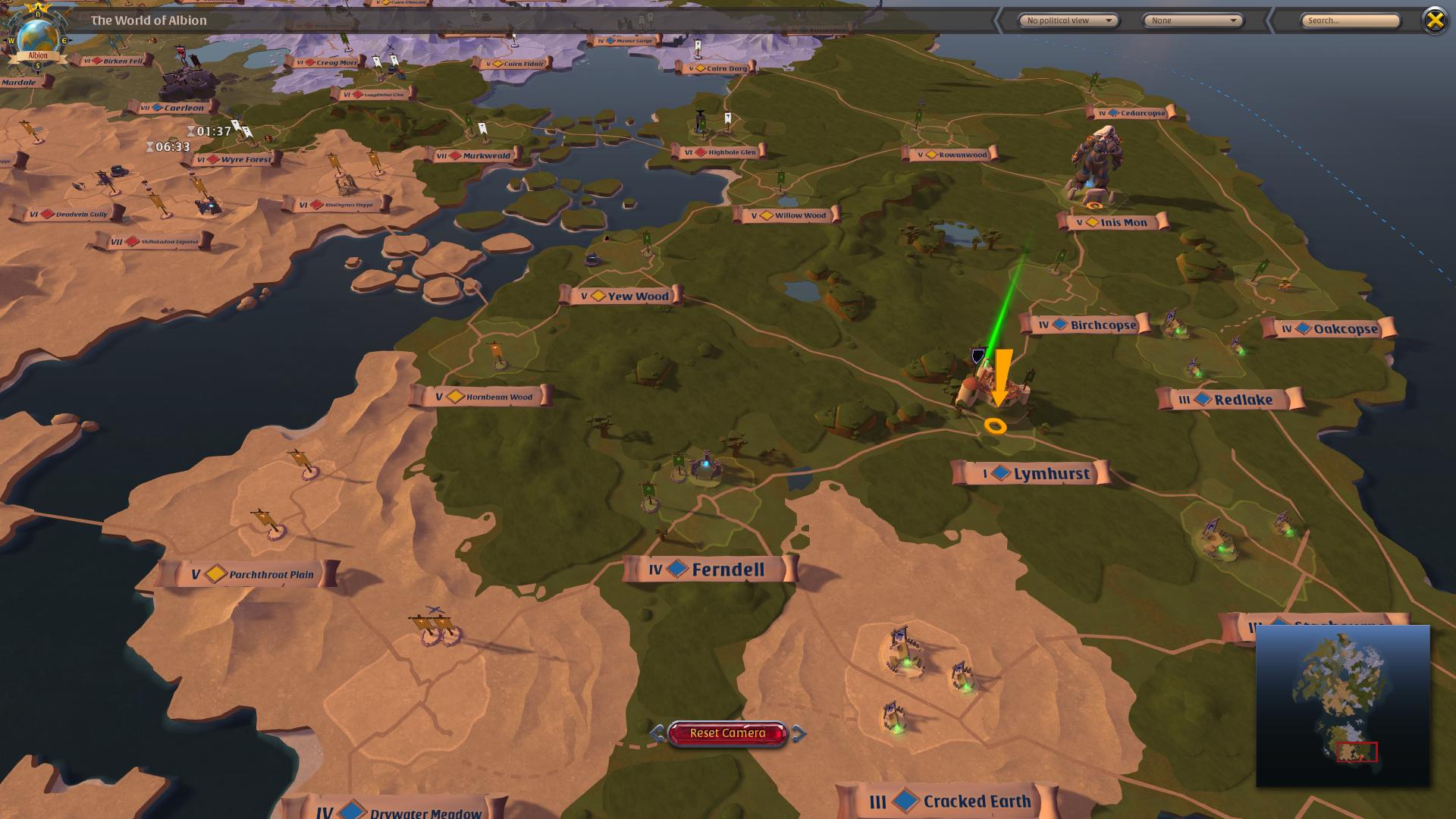 Over the course of my play time I ended up mostly wandering the wilds and beating up on random critters I found, and almost immediately I started to run into a spot of trouble. Things were taking a bit longer to kill, and I was near the brink on a couple of encounters. I mean, when a pair of boars gets you near death, there might be something wrong. Still, I decided to be careful and press on.

There were a couple of pleasant surprises over the course of my adventuring. At one point, I apparently unlocked a tome that had kicked out a whole bunch of Destiny Board experience, which unlocked the Pyromancer segment of my chosen weapon tree a whole lot sooner than I was expecting. It also (I think) dumped a whole lot of points that I could spend to unlock other tiers of things, and so I did just that, adding what I hoped would be a sense of advancement in an area that seemed to be a bit tougher than I had expected.

Hilariously enough, as I was navigating my UI and other windows, a dungeon portal opened up right next to me. Fate must have been on my side, surely! And just as I saw at least one other person start to ride by, I elected to leap into the delve without another thought.

The dungeon I was thrown in to was the Hidden Keep, and hoo boy was I in for it almost from the outset. The very entrance to the rest of the delve had five enemies scattered in front of me, at a point where two wild pigs almost laid me low. Needless to say, I was pretty nervous, but decided to suck it up, fling a fireball, and see what would happen. It went about the way one would expect. In fact, I was so focused on not trying to die (and failing) that I missed the fun little Mortal Kombat reference. 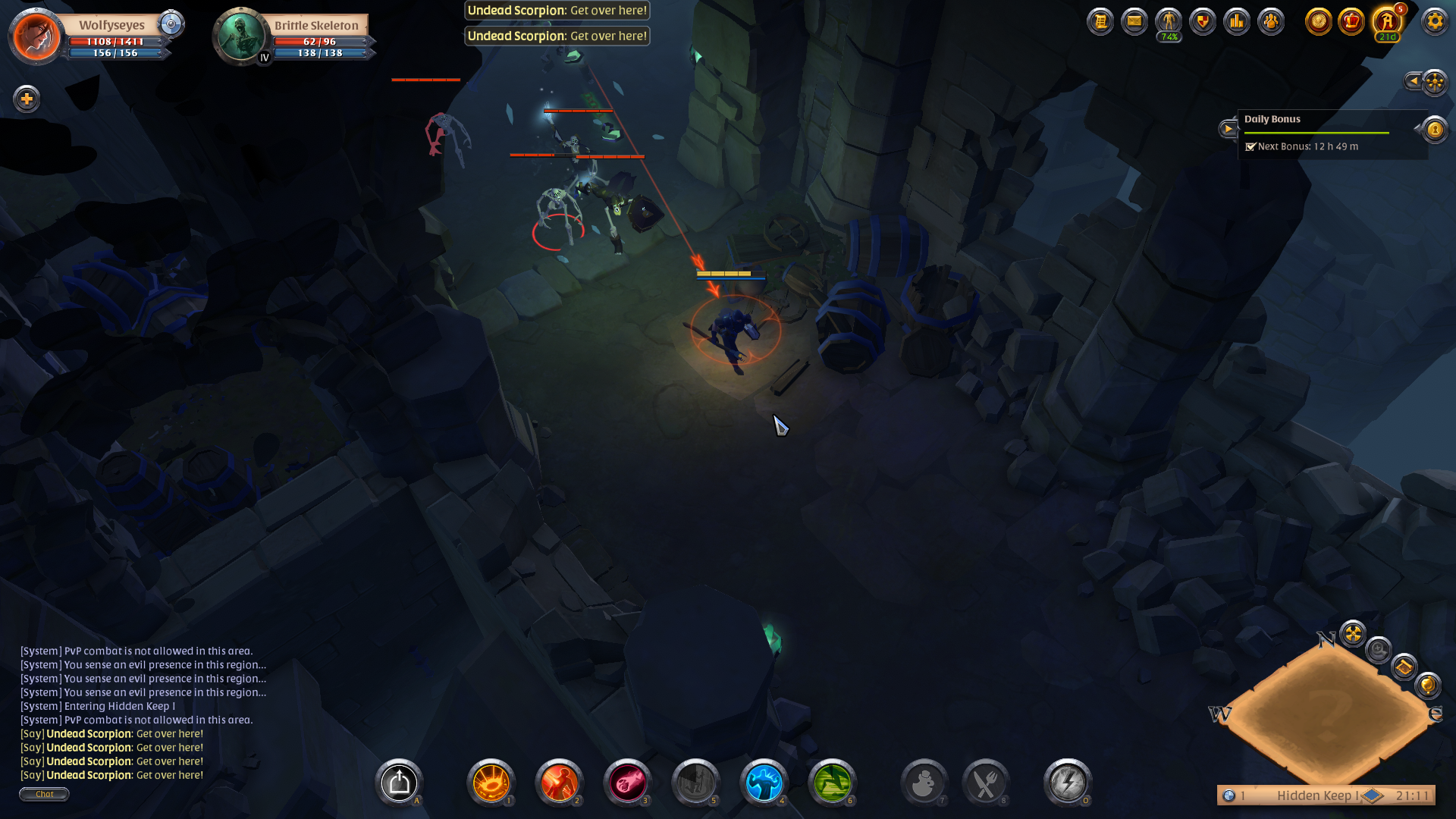 Speaking of dying, I have to say that, at least in the interim, the death penalty in Albion Online seems to be pretty lenient. My character just stood on her knees, contemplating her navel until one of two countdown timers would complete: the one that would allow my character to automatically get back up after fully healing, or the one that would let me concede and die. Presumably, because my HP was so low, the “get up” timer would fill up first, leaving my character with some damaged equipment but otherwise no worse for the wear.

Being so determined, I kept plugging away at the wall of enemies until, finally, I managed to isolate a couple of the softer targets and managed to break through the seemingly impenetrable wall of undead stuff. Further movement through the delve was a lot easier, though there was at least one point where I faced off against something that summoned extra monsters where I died. Ultimately, though, I made my way through to a treasure chest and what I presumed would be a boss fight.

This boss then proceeded to ravage my poor character, unleashing attacks that I wasn’t quite prepared for, including one telegraphed one that only had a wee little circle that grew beneath my feet as a warning that something bad was about to happen. Over and over again, I faced off against this thing, and over and over again I fell, taking damage to my equipment durability and my patience. At one point I was close to winning, but then the boss started to get larger for some reason. At last, I was beaten so soundly that my weapons and armor were blown off of my body. I was being damaged so hard, the donkey mount I was given was starting to take durability damage. This thing, quite literally, kicked my ass.

Beaten, bruised, and wholly ashamed, I walked my naked self back out of the delve. Just in time to see someone else with what looked like far nicer gear than me walk right on in. I assume they cleaned house shortly after. 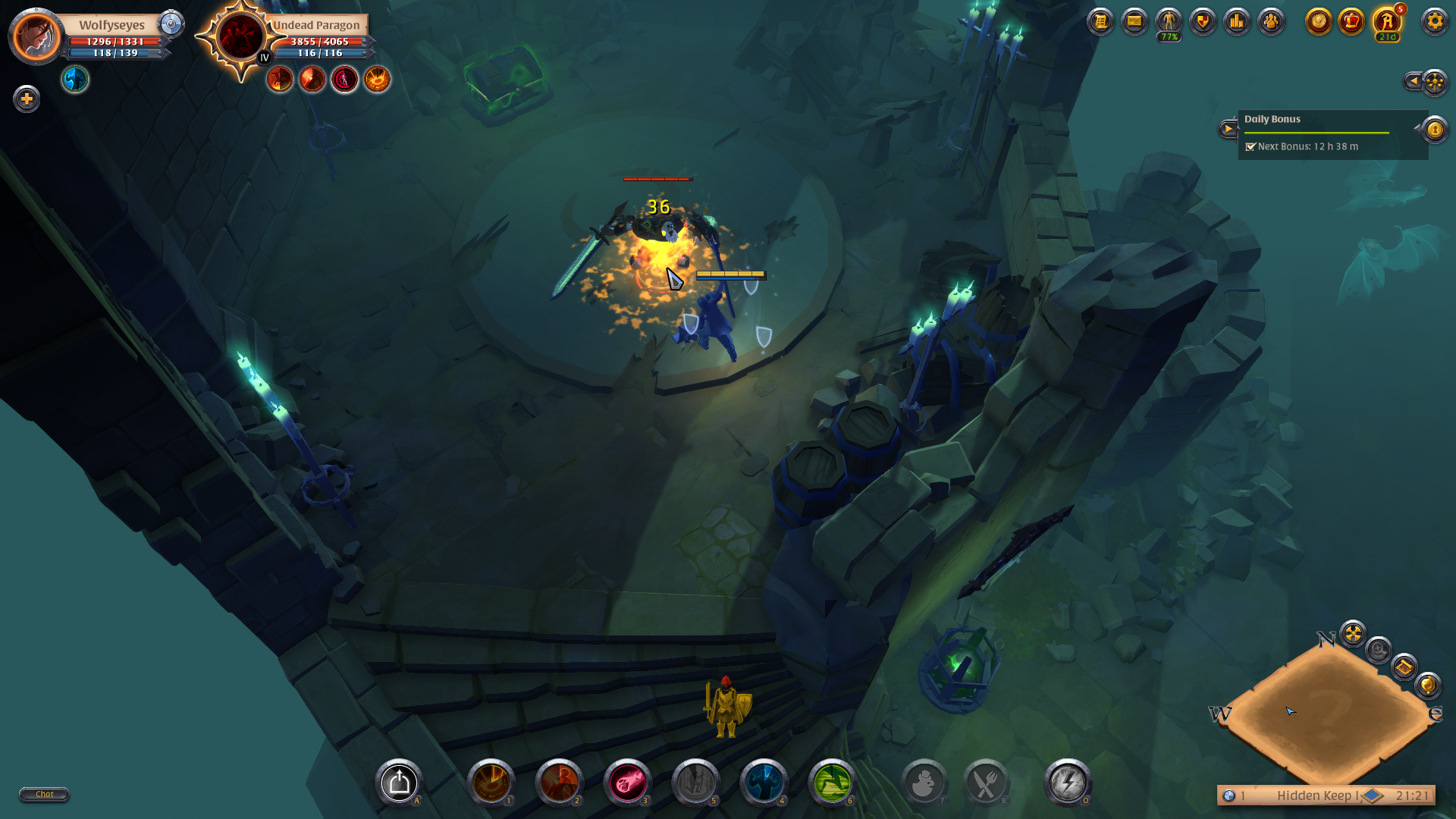 I’m almost positive most of my failure was predicated on my equipment not being good enough, but I also feel like I could have won the fight if I had finer control over my character. I was so close so often once I got the boss’ pattern down only to be foiled by the frustration of click-to-move and click-to-attack controls. Seriously, can we, as an MMORPG-playing society, all agree to kill click-to-move controls with fire, then put the ashes into a rocket and fire that rocket into the sun just to be sure it’s dead?

Control frustrations aside, I headed back to town, found out where to repair my equipment, picked up a new Infernal Staff from the marketplace (which was absolutely surrounded by player character lifebars), and strode back out again. This time, maybe, would be different.

It wasn’t. The new staff helped a bit, but over the course of my meandering I ran into another unclaimed delve that was full of cultists who took me down almost immediately. Especially one particularly large raven. Seriously, that thing took me out in three pecks of its beak. This raven was jacked. 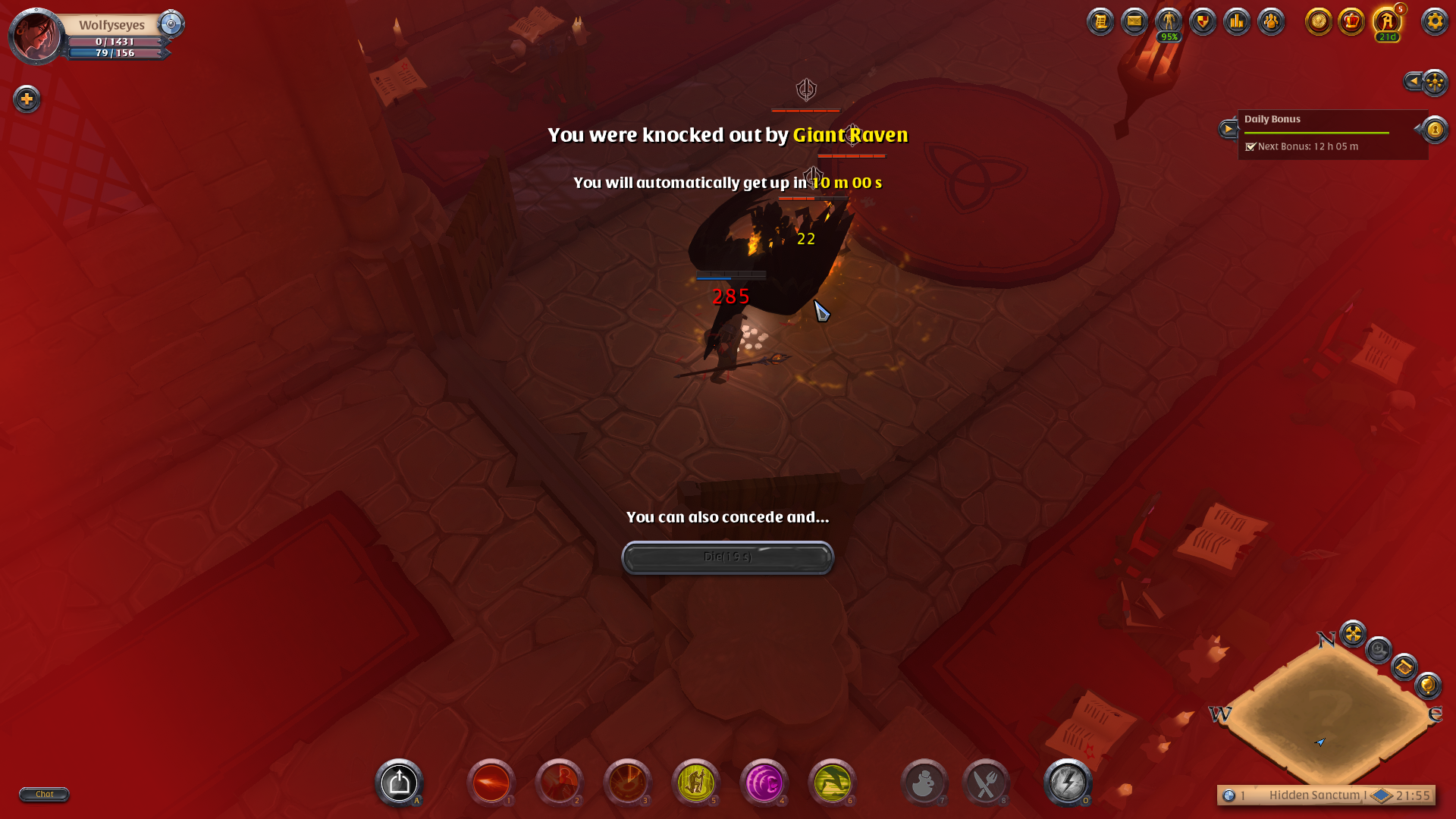 This time, I couldn’t blame click-to-move. I was purely outclassed in terms of equipment, and so I decided to try and investigate why. I think I came to the answer in regards to the tier of the areas I was exploring: Tier IV, to be exact. I finally started to pay closer attention to the little roman numerals on the corner of all of my equipment and began to piece together that I was, essentially, pushing the boundaries a bit too far.

So, that rather goes in to this week’s poll question of what to do. On the one hand, I need to take a moment to work up enough skill to get new gear and perhaps face these regions with better stuff. On the other hand, I could just wholly focus on crafting to the exclusion of everything else for a while. So what’s it going to be, friends?

Should I continue my exploration adventure, or work on crafting instead? 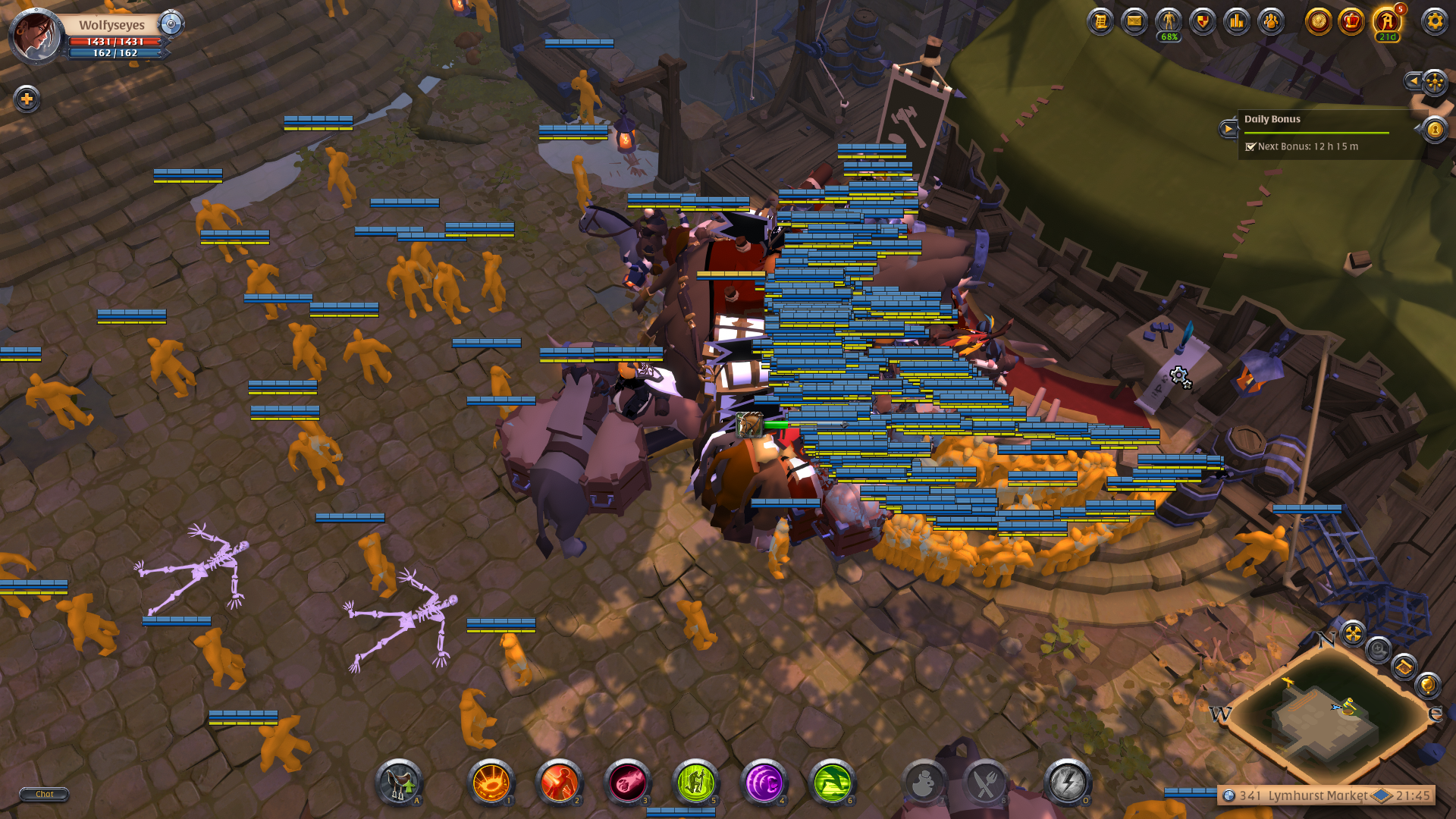 Like normal, polling will close out at 1:00 p.m. EDT on Friday, March 27th. In the meantime, I’m going to take a break and play something that’s not Albion Online. Something I’m good at, preferably.

The Daily Grind: What things do MMOs do pre-launch that look...