I love me a good library. When I was a kid, going to libraries and book stores were some of my favorite outings, so why would it be any different in MMOs? While we can’t get that awesome smell of thousands of tomes around us, at least the visuals bring us some peace.

Then again, if you stick your nose in a book, a nose might pop back out at you and attack. That’s what JonBuck got when he went to the Great Gubal Library in FFXIV. This is one book you probably want to put on the “do not read” pile. 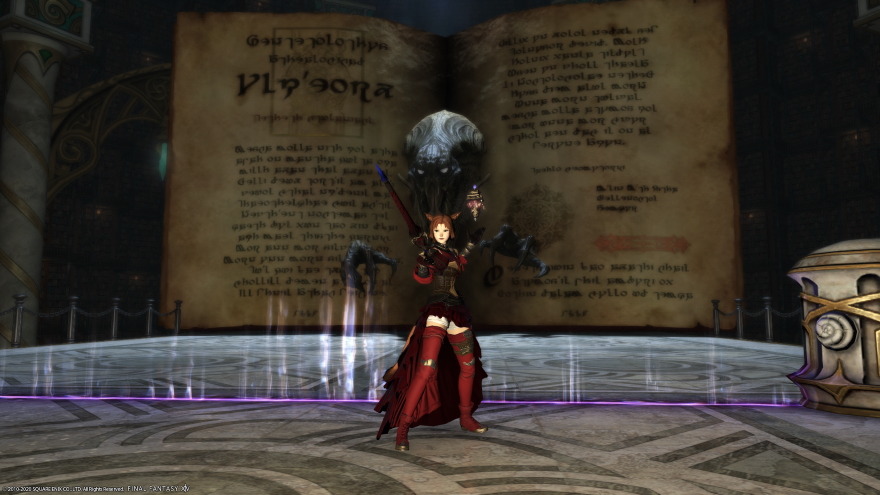 Another problem that you find in fantasy libraries is that the books don’t often behave. Utakata discovered this in World of Warcraft, as the books there don’t stay still but keep flying around, perhaps preparing to migrate to southern libraries for the winter. 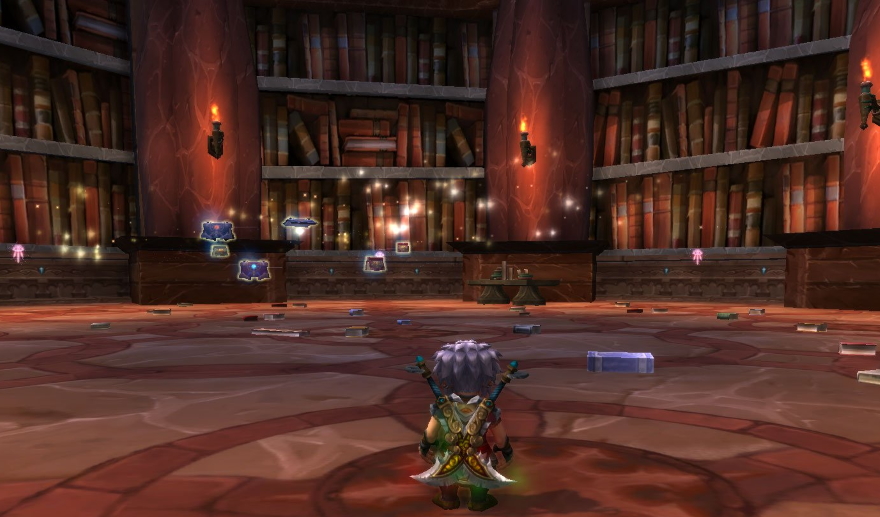 “Black Desert has some really nice libraries,” posted Natalyia. “The Library of the Valkyries in Calpheon has nice spots to discuss the finer points of sword and shield vs. lance combat, and an ample selection of tomes on other matters.” 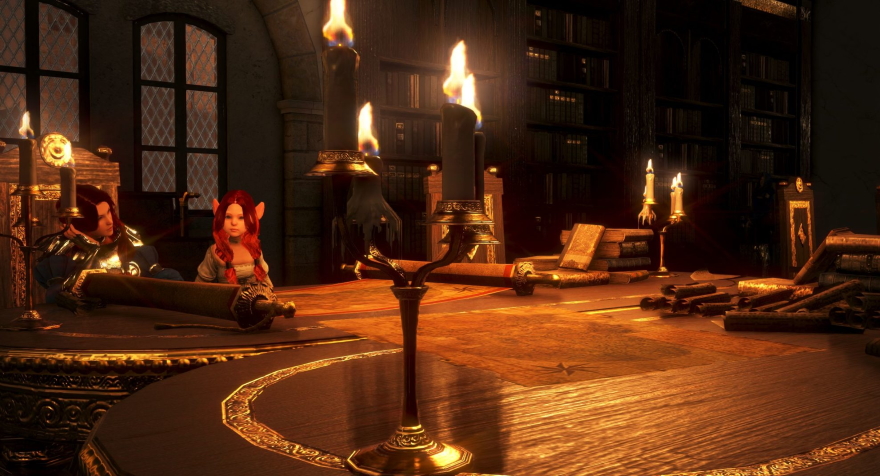 “I completely forgot about Secret World Legends,” Sleepy said, “The place is stuffed with libraries!”

I cannot imagine trying to be the librarian in charge of keeping track of all of that and having to reshelve books that are 100 feet off the ground. Isn’t this why we invented the internet? 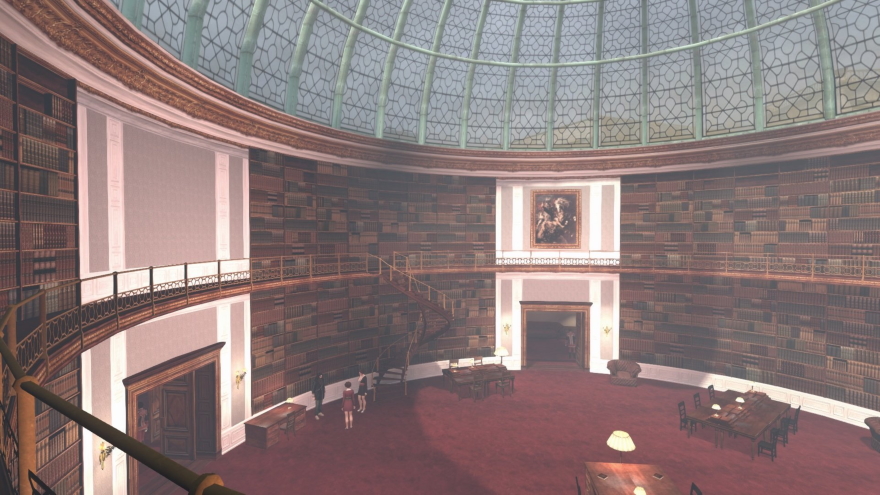 And for something non-booky, I give you… this thing.

“I spend lots of time in Star Citizen, but lately I’ve been playing Red Dead Online with a friend,” said Ichi. “The game has issues with modders, one of whom must have known about my penchant for Star Citizen, as they turned me into a saucer.” 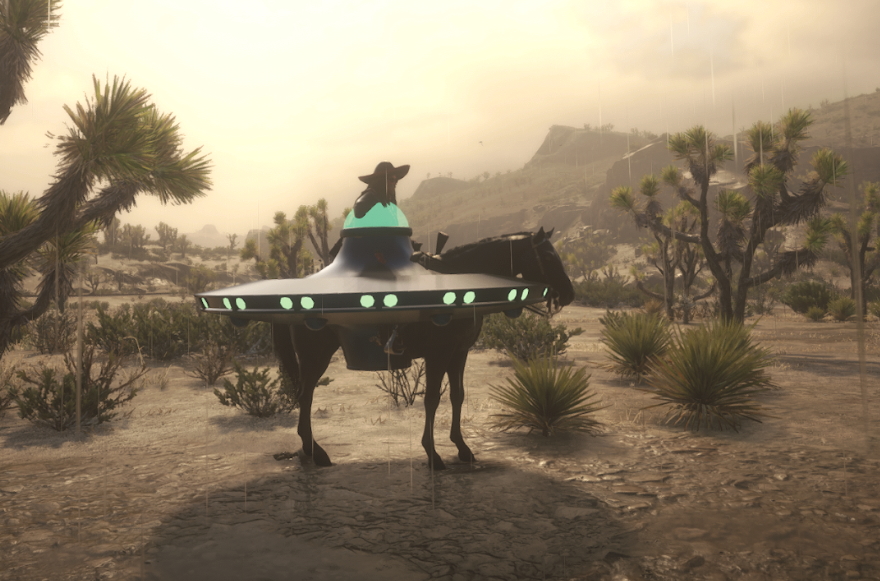 That gives me an idea for this week’s screenshot challenge: Let’s get all clippy up in here! Show off pictures that are horrible (or, in a different view, great) examples of graphics clipping in ugly and unnatural ways.

Interesting fact! LOTRO used to vanish water if you angled your camera just parallel to it. You used to be able to reveal the entire bottom of Evendim lake in all its barren glory, for example. I never too any screenshots and they fixed it a few years back, so here’s a pretty picture taken in Hobbiton instead.

It still amazes me how beautiful that game can be, Sleepy, even all these years later …

Thanks for the pic!

I don’t tend to take pictures of horrible clipping – but I do take advantage of it when I can. The Strongholds of Star Wars: The Old Republic give you a lot of pieces to play with, and you can often overlap them to make cool things:

We’ve got statues in fountains on Coruscant, three different tech items combined to make some sort of “planetary scanner”, Sith scientists using MadScienceTech to examine a Rakata, Jedi interior decorating (complete with runic headboard and endtables!), and a reactor control complex on Tatooine.

Have a few creative combos like that on Yavin as well. Reminds me of City of Heroes as well. That is certainly a game where we used things in unintentional ways.

I managed to secure myself a Freedom-class Federation starship in Star Trek Online recently.

This is a “parallel universe” starship from the continuity of the recent Star Trek films — Star Trek: Beyond, specifically.

The ship is fairly rare in the game, and you do not want to know how many of my bodily organs I had to sell on the in-game player market to buy this thing, but I’m happy with it, and with the command crew characters I created for it.

When I was taking a screenshot to share here, I noticed that if you look very closely, you can apparently see inside the main viewport of the starship’s bridge.

Squint and you can make out the outline of the ops and helm station.

I have no doubt that it’s some sort of optical trick realized inside the game engine — no one actually created a miniature interior, I’m sure — but the fact that somebody thought to add the illusion of interior detail, and then implemented it, very much impresses me. Talk about fan-service that goes above and beyond the call of duty!

The care and attention the STO team gives to their starships is a delight. I’ve spent more time than I care to admit just admiring the various ships :)

I have to agree, Like most MMORPG dev teams, people heap endless scorn on the STO folks for all their perceived “sins”, but so few seem to notice when they go the extra distance for details like this.

Thanks for being one of the “non-yelly” people! Hahaha :-)

Interesting. That’s a ship I’ve always wanted but I really don’t have enough characters for all the ships I already own.

Did you try setting your fov closer or using demo record to try to peek inside?

I was able to get in closer with the normal camera, but what I was looking at would lose context. I figured, this being One Shots, it was important to show the starship as a whole for context — and because it looks good. :-)

No demo record as yet, but you can definitely see the interior effect better when live in-game. I’m still convinced it’s some sort of optical/graphical texturing trick in play — and a clever one at that. Creating some sort of actual miniature interior seems far too work and time-intensive considering a game dev’s typical work schedule.

As for characters, since the “Kelvin universe” of the JJ Abrams Trek movies feature alternative versions of the original Trek main characters, I went largely the same route, but with minor characters.

My captain is Ethan Lee Kelso, which references Lee Kelso, who perishes in the second TOS pilot episode, featuring Shatner. My CMO is a version of Elizabeth Dehner, from the same episode. My helm officer is J.M. Colt, who appeared in the original TOS pilot with Pike, and so on.

Some original characters in there too, of course, but playing with alt-canon ideas is part of the fun for me, with a parallel universe crew now far from home.

I do similar things with my characters. Our 23rd Century captains flew NX-01s to level 50 then switched to NX-01-Refits. Mine is based on the Vulcan First Officer from Star Trek First Contact. She is only mentioned by name in non-canon works, but I gave her that name.

She became enchanted with Earth culture and stayed behind to help them. When they started mass producing ships of the Enterprise/Columbia line, she took command of the USS Khaiya (Vulcan word for Archery).

Yes, this made her in her 200s when Daniels yanked her into the 25th century. The Khaiya was refit into the USS Suus Mahna, the more well-known martial art.

I also have characters that are exclusively Kelvin and Discovery.

Thanks for the feature. :)

here I’ve been buying spaceships from Chris Roberts when some fool is handing them out for free!

here’s Cinco and I without the extraterrestrialism

…one of the reason why I often don’t show this toon (a Warden) at this angle because despite giving Lyn this class in Blade & Soul, they never factored in small characters with large tails carrying enormous swords properly. Hence shown, is a sword cutting into half of her tail (ouch!). Not shown is a 3rd of the sword is constantly stuck in the ground at rest. This is just bloody well right…

Further on in this discussion, is an example of how to do this right. Where the Elin here (a Berserker) in TERA where allowed to carry such massive axes by having the weapon’s handle telescope out only when in combat. As at rest, the handle is retracted and the blade is all you really see. Thusly, no apparent clipping of ground or tail. (Note this also true with Elin Lancers.)

And sorry for the extra soap box here…clipping is one of my biggest pet peeves with MMO’s. While on the occasion you can’t get around it, but it does show when the developers don’t really care about the product if the thing is a constant glaring issue IMO. /sigh

PS. And thanks for my image plug again, Mr. Justin. /bows

“I’m not sure folks come here to hear your lecture, Uta.”

Yeah…I did go overboard on this. I’ll keep contributions to this channel purely pictorial in future. My apologies to all the readers for messing this one up. I should of known better. :(

I rather enjoyed your commentary.

Lineage II celebrates 6,000 days of uptime with server boosts and...