Steam has long been regarded as a pit of doom, loaded with asset flips and scams, where where indies go to die and MMO temports show up for one last hurrah before free-to-play and abandonment. But it’s our pit of doom. And Valve would like you to believe it’s getting less doomy all the time. But it’s kinda not.

In its latest blog post, the company contends that the “number of games achieving success on Steam” has seen a continuous increase, and that “earnings prospects for most” titles increased in 2019. Granted, the total number of games on Steam overall also keeps going up, thanks to Valve’s persistent loosening of centralized approval control in the last decade. Even so, when looking at strictly paid games making $10,000 at launch, Valve found that the “increase wasn’t just due to a larger number of games on the platform – the proportion of games meeting success increased by 11% in 2019.”

That still requires us to accept Valve’s premise that making $10,000 at launch actually constitutes success, of course. So the company also looked at percentile comparisons – how did the top 25% of new games do from one year to the next?

In other words, the rich get richer and the poor get poorer. As Kotaku and Ars Technica put it, the key takeaway here is that the vast majority of Steam games are colossal failures, and the worst failures are failing harder all the time. Awesome. 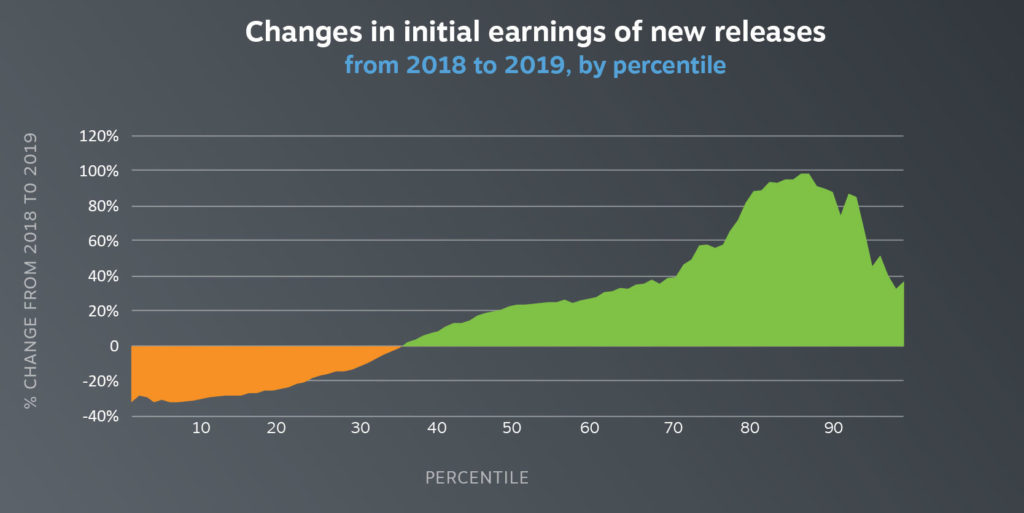 Doesn’t this speak more to the lack of quality of most games more than that it’s on Steam?

Steam has a terrible discoverability issue, just like Google Play. Too much stuff is released there and so most of it goes unnoticed. You have to find other ways to get people to know about your game other than just releasing it on Steam. I get that many years ago just having it be on Steam was enough, but it’s been a long time since that was true.

There seems to still be companies that think just releasing it on Steam and putting a small notice on their home webpage and social media about the Steam release is enough. That only works for big-name games and companies most people know.

Most users don’t go through all of Steam’s new releases because there are just too many of them (a minority do). Instead, the majority of people just track the “Popular New Releases” tab and front page deals and such. Being either in the Popular New Releases or on the front page of Steam is still a bonus, but just getting released there isn’t the big money maker it may have been 10 years ago or whenever.

I mean that’s just how the game industry works. Being on Steam will help to some extent, but it won’t really help the failing games that were doomed from the start.

$10,000 is hardly a success. I’m a boring old corporate dev that builds line of business web and desktop app, and I can tell you junior level guys in my line of work make $50-60k like FRESH out of college. For me it wouldn’t even be worth my time to go learn the dev tools and frameworks to make a game as a one-man show for $10k, and anything I could come up with by myself would surely land in the “colossal failure” category. I can’t imagine how much of a financial disaster putting together a team, even a small team, of seasoned game developers and producing a game that generates $10k at launch is.

Those were the same economics I was looking at when planning out what it would be like to launch a studio. Reality is that as much as we complain about the top end of the gaming market being “same old”, much like movies that’s where the market is.

Unless you have the resources to build around an established IP, or the willingness to press ahead in the almost equally depressing crowdfunding space, you’re really going to struggle to break through. The market is pretty saturated, and with fragmented choices and limited time gamers are choosing known experiences

This is inevitable, money is finite, some developers and specially publishers, have this idea that if game A makes 1 million they can make the same if they release a game of similar quality, the truth is that million is gone, and it’s not a guarantee that there’s another million left, and even if there was the game that made the million in the first place is still around and your game is not the only one trying to get into that market, the math is pretty simple.

And that is the best case scenario, the reality is school projects being released as if they were complete games, asking for little but still more than the price of an older high quality game, for reference Duke Nukem and Doom were shareware, you got the first few levels of the game for free, and if you liked it you payed for the full product, those demos had more content that 10 of your typical Steam “indie” game put together, and this was a couple of decades ago, when the economy was better and the market for gaming was growing, Steam has many faults but this is just lack of awareness from some of the people releasing games on Steam.

Fortunately developers have choices now where they want to release their stuff. Nintendo’s marketplace for the Switch is showcases games really poorly as well. If your game is good, you’ve got a better shot now than 2-4 years ago because of new marketplaces.

I have so many game clients on my rig though it’s awful.

17 games per day. That is the average number of games added to the Steam catalog every day, based on their average of 7000 games added per year. This creates the crowded storefront, and Valve refuses to do anything about it. And this isn’t about greed, because the fact is that Valve isn’t making any real money off that junk: 7000 games x $100 refundable deposit = $700k for a company that generates billions, and only if Valve gets to keep it, most of which they don’t. I have no idea what the hell is going on with their thought process on this, because to me it looks like a store run by PCMRs to reductio ad absurdum. I’m sure it’s probably about maintaining the monopoly, but it’s beyond me to figure out what the strategy is.

As far as any comments from them on the matter (that I can find), they apparently looked at their growing “influence” (read – near monopoly) in the PC games market in terms of games coming to PC…basically games were being treated as “if it’s not on Steam I’ll not bother with it” and decided they didn’t want to be the “gatekeepers” for what games come to PC…

Which can either be read at face value, or if you’re cynical toward Steam does like me then read that as “we don’t want the responsibility that comes with it.” That they tend to be hands off and try and create automated processes, or other systems that is in the hands of the community (curators, etc)., definitely feeds into that cynicism.

Part of the reason I’m on Steam, and won’t even consider purchasing things on most competing storefronts like Epic and Origin, is because I simply love the fact Steam doesn’t restrict (too much) which games get released there. There’s quite a few games I enjoyed on Steam that would never be able to release on any curated storefront.

I’m old enough to remember when developers (especially indies) cried and clamored about how difficult it was to gain entry to Steam’s walled garden. Every single one of them approached it as if their game was a gem that was sure to be a huge success if they could just get it on the store.

With enough shouting and stamping of feet, Steam relaxed curation and the floodgates opened. In came all the indies with their gems alongside a rush of crap and asset-flips which drowned them all. No one benefited from this except, maybe, Valve. Developers got lost in the sea, players couldn’t find good titles, and Valve still made money.

Now that indies have had to reap what they’ve sown, there’s a push for Steam to curate again. Now the mantra is “my game is a gem but no one can find it, so if we could just get rid of all the other games, that would be great!”

Its a cutthroat market. That’s why studios have been taking the guaranteed Epic-Tencent money and releasing on Epic first. Once the free money well dries up there will still be the better cut to entice devs, but you still have to convince people to buy the game in the first place.

When Valve hand-picked which games came out on Steam developers demanded fewer barriers to entry and customers wanted more games to buy. You can’t release everyone’s games and have everyone make big money off it. You advertise your game and cross your fingers it will catch on.

“Steam has long been regarded as a pit of doom, loaded with asset flips and scams…”

Some would argue that most of the games released on any storefront deserve to be failures by virtue of the fact that most of them aren’t very good. There is no solution to ensure that all earnest hard-working developers make money from their products.

This is it exactly.

Granted, the total number of games on Steam overall also keeps going up, thanks to Valve’s persistent loosening of centralized approval control in the last decade.

People always seem to forget that ten years ago everyone HATED how hard it was to get games onto Steam and gaming blogs like RPS constantly agitated to get Steam to open up.

I didn’t forget – I was writing for Massively 10 years ago myself. I just knew and know there is a more desirable middle ground between “let almost nothing through” and “let everything through and make tons of money for Valve and still have no proper discovery tools years later.”