When a planet has stiffed you one too many times and yanked you around, it’s time to put it at your back and head off for friendlier solar systems. Don’t let planets abuse your trust and love, friends. They’re crusty at the core and keep doing 180s when you aren’t looking.

“I managed to secure myself a Freedom-class Federation starship in Star Trek Online recently,” shared Mysecretid. “This is a parallel universe starship from the continuity of the recent Star Trek films — Star Trek: Beyond, specifically. The ship is fairly rare in the game, and you do not want to know how many of my bodily organs I had to sell on the in-game player market to buy this thing, but I’m happy with it, and with the command crew characters I created for it.” 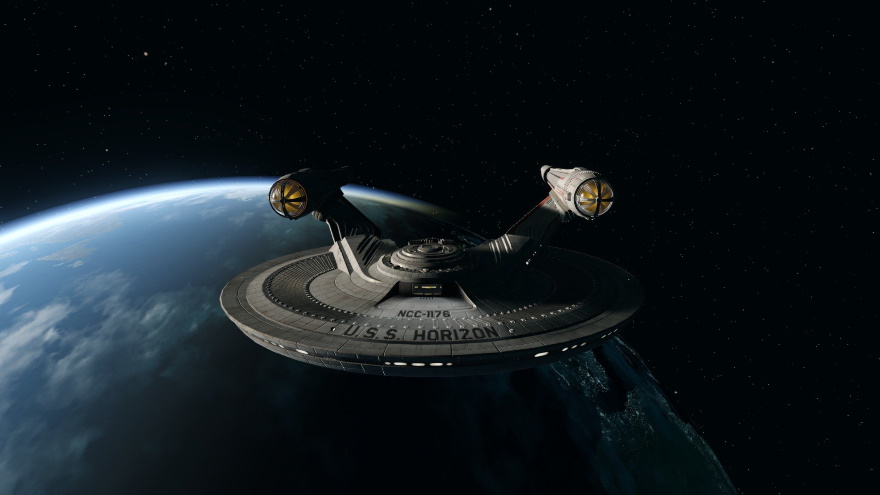 Sleepy is in session today, so pay attention! “Interesting fact: Lord of the Rings Online used to vanish water if you angled your camera just parallel to it. You used to be able to reveal the entire bottom of Evendim lake in all its barren glory, for example. I never too any screenshots and they fixed it a few years back, so here’s a pretty picture taken in Hobbiton instead.” 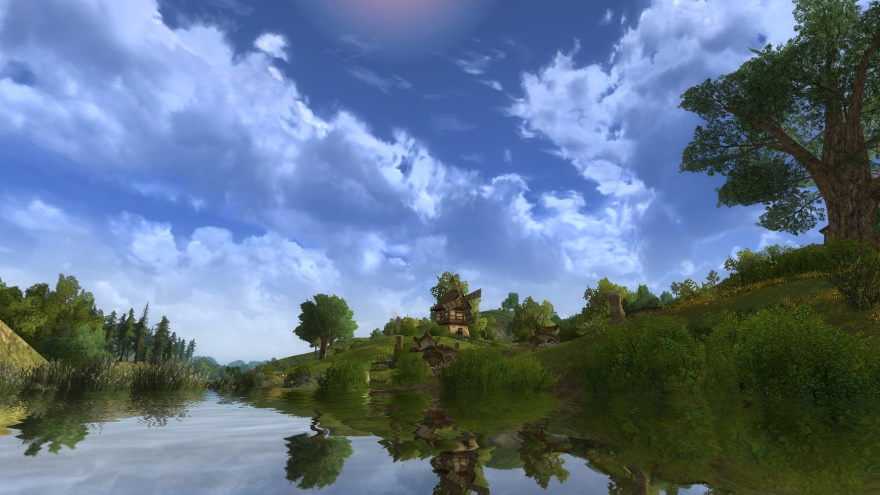 “The Strongholds of Star Wars: The Old Republic give you a lot of pieces to play with, and you can often overlap them to make cool things, such as these statues in fountains on Coruscant,” said Natalyia. 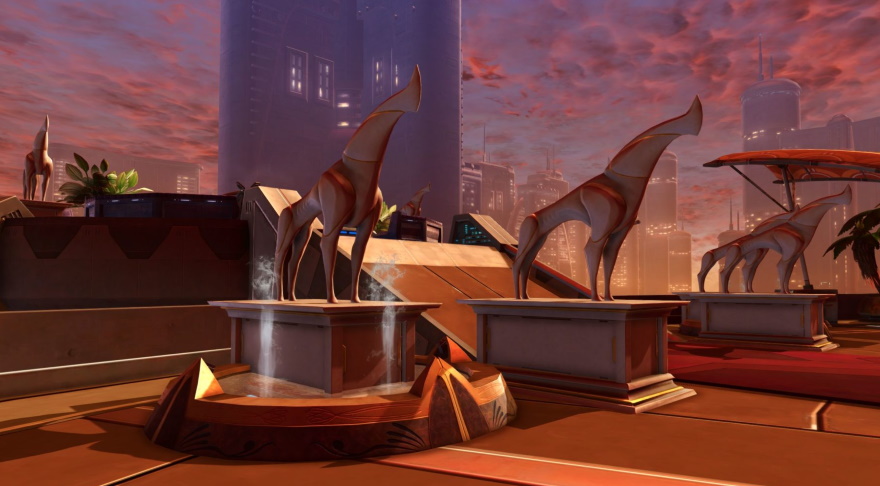 Last week, I asked readers to share documented examples of clipping in MMOs. Utakata came to the rescue with this TERA pic.

“Further on in this discussion, is an example of how to do this right,” the Pigtails of Power said. “The Elin here is allowed to carry such massive axes by having the weapon’s handle telescope out only when in combat. As at rest, the handle is retracted and the blade is all you really see. Thusly, no apparent clipping of ground or tail. And sorry for the extra soap box here, but clipping is one of my biggest pet peeves with MMOs. While on the occasion you can’t get around it, but it does show when the developers don’t really care about the product if the thing is a constant glaring issue IMO.” 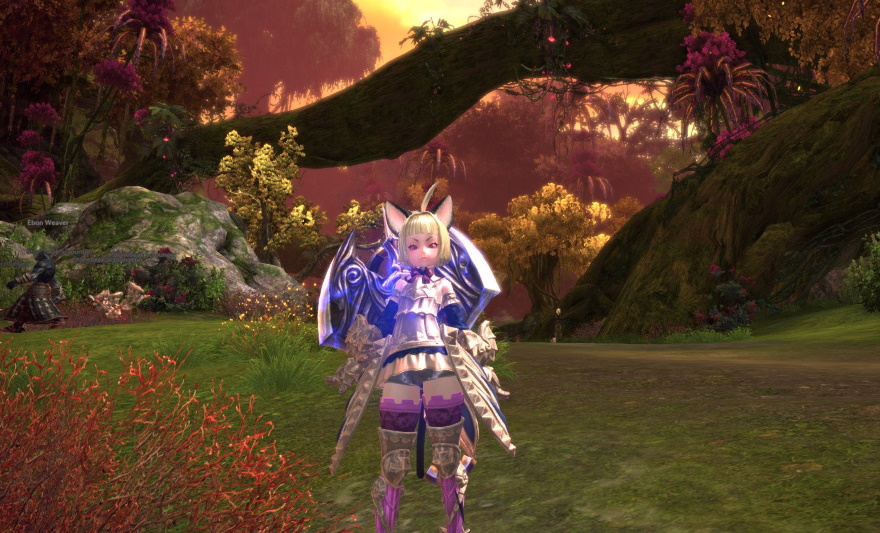 On the other side of the clipping spectrum is Ichi here, who shared this David Cronenberg-like mishap in Star Citizen. Ichi calls it “kinky clipping” but I call it “I won’t be able to sleep tonight after seeing this, so thanks so much for sending it in.” 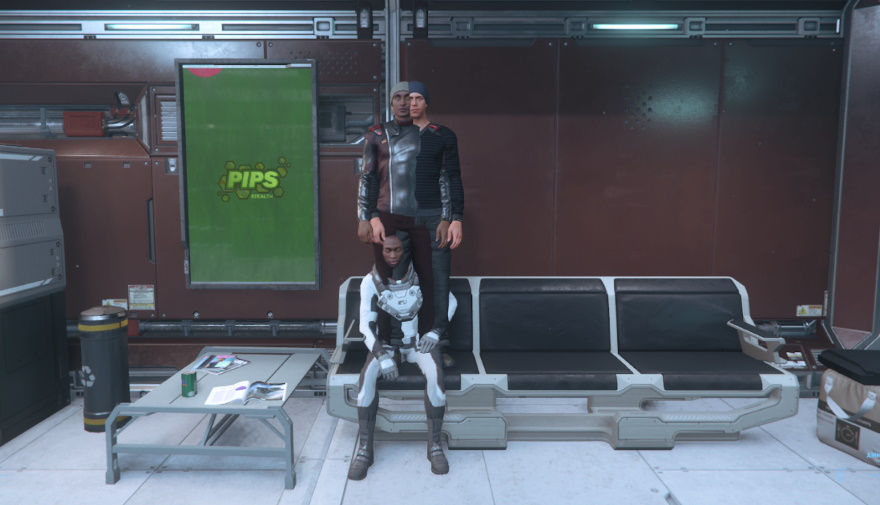 Time for your weekly screenshot challenge, which you can take or ignore as you will! Share pictures of the comfiest looking beds, hammocks, and other sleeping areas that you wouldn’t mind using for a little snuggle-and-snooze.

The definition of “comfy” varies a bit from character to character…

The discerning trader with an eye for conspicuous consumption on the other hand, puts a water feature in their bedroom on Tatooine. If you’ve got it, flaunt it?

In Black Desert Online’s Valencia, luxury is the byword, so having a view out over the city, with a pleasant trellis sheltering the en-suite hot-tub and cherry-blossom trees is a definite selling-point for the discerning homeowner.

In the Exiled Lands you can make most anything you like – here, we have a forest-view with a balcony and nice fireplace to keep the chill off.

The Mandalorian Champion of the Great Hunt chose a venue on NarShadda – Hutts are a reliable source of bounties, and easy access to the casinos is a plus, certainly.

OK, one more – since the water festival is up and running (to the sea) in BDO right now, here’s a nice pavilion with comfy pillows, a fountain and a happy miniature elephant to take a nap in…

In Rift, my High Elf Mage comes home to a warm hearth and her welcoming cat.

I was looking to buy a place as a fixer-upper in Coldharbour but I decided it was all smoke and mirrors. The landlord and I had…words.

In FFXIV, you can craft your own flying bed mount, so you are ALWAYS able to take a comfy nap! This is sunrise in the middle of the Ruby Sea.

“All about them as they lay hung the darkness, hollow and immense, and they were oppressed by the loneliness and vastness of the dolven halls and endlessly branching stairs and passages. The wildest imaginings that dark rumour had ever suggested to the hobbits fell short of the actual dread and wonder of Moria.”

In honor of Easter, just me and buddy Velen chilling out in Alternate Outland a few quests away from dying for our sins.

Not sure this is a pirate ship or a pimpmobile… O.o

“…the Pigtails of Power said…”

…the said appendages are not going to let that one down, Mr. Justin. Be warned! <3

And thanks for plugging that image…and the patience for listening to that soap box dissertation that came with it. :(

Many a movie night has been spent lounging in Guild Wars 2. It makes a good setting for dramatic or fantasy shows.

BDO actually has a ton of decorations that can make a house feel downright homey. You can also get creative with pillows for some pretty comfy settings.

Thought I might share a few more of my snaps from Project Cars 2. It does have fully featured multiplayer though these are taken from the single player career mode. It’s going to be a long time before I poke my nose into multiplayer.

I really should stop racing on the UK tracks and branch out to other sunnier places. It seem every other race is in the rain and I should be racing boats rather than cars.

I will neither confirm nor deny that I crashed immediately after taking that last shot, completely wrecked the car and the race. The things I do for a nice screenshot 😉

Those are usually not that comfortable to sleep in. >.<

The seat in this car is actually a very comfy sofa. I know right I was supprised too.

It’s worth noting these cars are designed and fiited by Doctor Who Engineering Ltd. They can apparently fit any size sofa in any size of car using some wibbly wobbly space time magic.

So if you are tired enough it’s actually quite easy to fall asleep at the wheel ……. um controller in one of these. As an added benefit the wibbly wobbly space time magic also prevent you needing to visit the ER should you snooze on the go😴