One multiplayerish game that we’ve talked about a bit as the MOP team’s been quarantined on the Golden Yacht is Animal Crossing: New Horizons. As several of us are fairly passionate about the game, I figured I’d share some of the comparisons I’ve been holding back expanding on in our chat, and even ways ACNH is doing MMO “housing” right that building and customization purists probably miss from their favorite classic MMOs.

What MMO fans will recognize

Let’s start with the bare basics. MMO housing is something a lot of online gamers love. But even so, it’s hard to say exactly what “MMO housing” is these days since the genre’s branched out and mixed with others, but I think we can all agree that the major draws are that it’s about owning something in the world and using it to express yourself. Whether that means decorating an instanced apartment with furniture that fits on hooks or free-form terraforming land you’ll need to defend, MMO players like having a place to call and make their own. Oh, and additional storage, of course. 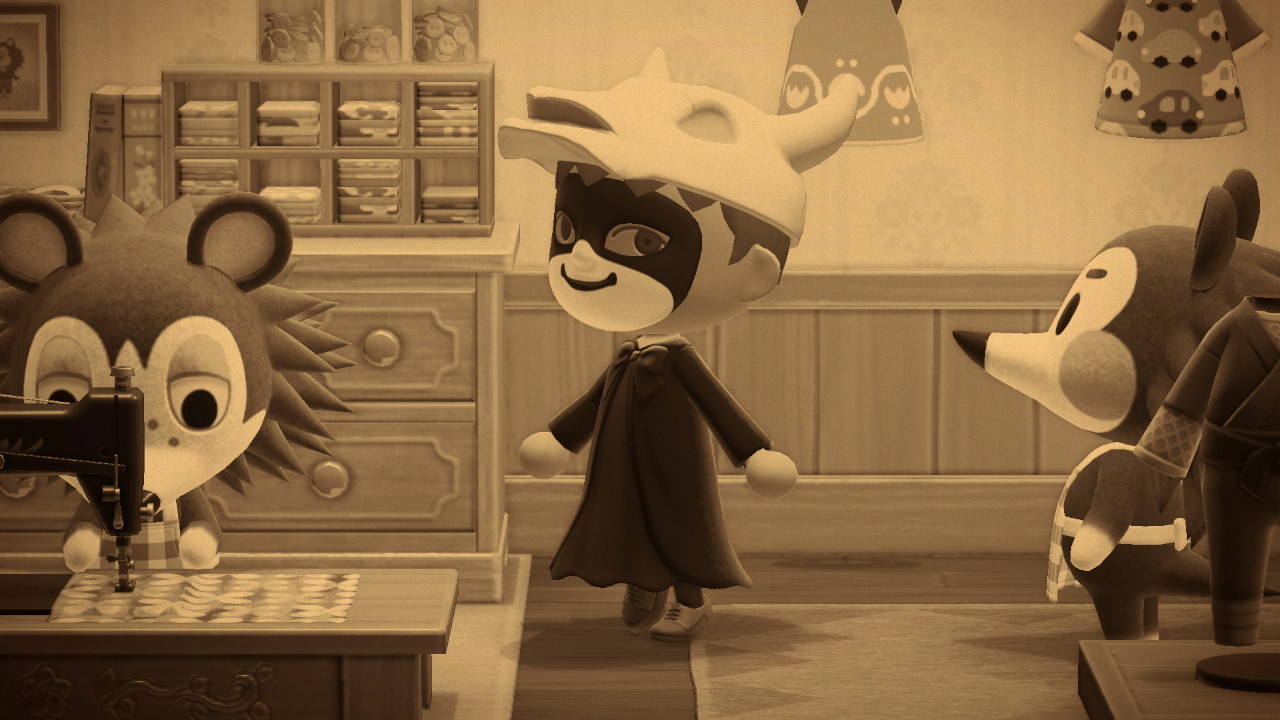 Ownership and customization are a big part of the Animal Crossing series. If we’re just talking housing, the game is probably most similar to MMOs like Lord of the Rings Online or Final Fantasy XI: It’s semi-instanced, mostly used for storage, and has a few neat items with unique functions, but instead of hooks, objects are set on a grid pattern. You’re able to change wallpaper, flooring, light sources, music, and even add custom art you create by hand (unless you want to use fan-created stuff, Getty Art images or import pixelated versions of other stuff).

However, ACNH has moved beyond just housing and gives you an entire island to play with, which appeals to the parts of me that miss the likes of Star War Galaxies, Horizons (now Istaria), WildStar, and Landmark. One of the biggest draws is terraforming, which we don’t get a lot of in traditional MMOs, but survival games big and small have included it in some form. I know the Wurm Online fans will probably scoff because they have some great world-building tools, but it’s also hard to get people excited about older games. I am mentioning older games, though, because I’m hoping that a new game that is using older ideas shows devs that you don’t need to reinvent the wheel – you just need to make sure it runs well.

Granted, not every MMO player is a housing fan. And some people obviously won’t want to play Animal Crossing because it lacks combat, isn’t playable on PC, or consists chiefly of walking talking animals telling awful puns. I can bearly understand that, but you do you! What I want to call attention to are features that have been in other MMOs and can be re-adopted back into the genre.

Graphically cute, the terraforming in ACNH feels a bit like Minecraft without being too complex. I’m still tooling around with it, but you basically have dirt piles, cliff edges, and water. You can layer cliffs so people can’t go over them, but you can’t create walls that totally block off areas, so no one should get trapped, especially because you can’t terraform when other people are playing with you.

Although creating rivers, ponds, and mountains can be aesthetically pleasing, it’s also functional. For example, coconut trees grow only on your beach, but if you cover grass with the path tool for sand, you can plant coconuts where ever you want. Plants, insects, and aquatic animals all spawn/grow in different areas. That means you can make a town ripe for making money, especially if you decide to game the system a bit and keep your town stuck in a certain season containing lucrative spawns, but you can also do other fun things with it.

Multi-level layouts, wide rivers or gaps, and cliffs can be used to make mazes where the host can bury objects for friends to come find. They can also use certain objects to host bug catching or fishing tournaments. Certain parts of one’s island are more lucrative than others, adding a new challenge for your friends to navigate.

But it’s not all player-controlled. Each island can have localized events, such as weather or time-based effects. No, lighting won’t strike you dead because it isn’t that kind of game, but things such as rain, random visiting NPCs, and shifting “stalk prices” (think localized economies) are all features of the game. In a sense, each player is building an instanced zone. An overall calendar dictates when certain events might happen, and throughout the day, additional events can happen, such as rain increasing rare fish spawns or night bringing meteor showers for rare minerals.

And that’s one of the big takeaways about ACNH’s approach to “housing.” It’s not just that you’re limited to a house. It’s not just ownership or expression. It’s not just making custom clothing (which you can, and I really have wanted that in a proper MMO for ages; I don’t just want an enchanted +2 strength tunic – I want to be Joestar-hot).  It’s not even purely about adding function. It’s all of that with a dash of randomness.

Maybe an NPC you usually don’t like is suddenly moving out and a friend who appreciates weird face wants ’em to move in. Or maybe your turnip prices are stupidly high, so lots of people want to visit your town, granting you tons of NookMiles to buy your fifth lighthouse because no, you can’t have enough of them. Or maybe you have a rainy day, invite a friend over who doesn’t get to play much, and he catches his favorite fish after a bad week and that freaking coelacanth gives your friend the energy he needs to open up.

Don’t get me wrong, my favorite MMO housing is non-instanced, light on NPCs, and often involves territory changing hands. But I also like it when things get cute – when I can just do something silly, or weird, and not worry about min-maxing. It’s not all about blasting my enemies or earning levels. Visiting a themepark-themed island during this stay-at-home era can be nice with a friend. Helping a stranger get her obstacle course just right can be fun. Using a friend’s house because it’s near Awesome Dungeon B is nice, but sometimes having tools so that house is the actual destination is even better.

Massively on the Go: Why MMO players will love Animal Crossing New Horizons

Massively on the Go: Animal Crossing’s housing islands from an MMO player’s perspective

Massively on the Go: Happy Home Paradise is the cherry on top of Animal Crossing New Horizons’ final update

I really enjoyed this article (and the fact that MOP covers Animal Crossing). I’ve not played AC before but am really curious about this one (no combat = exactly my wheelhouse, especially as it ensures other activities are fleshed out and interesting).
Will probably give it a try soon!

ACNH echoes a lot of what wow had us doing in our garrisons, which was then weakly copied to “order halls” in the subsequent expansion, and then basically dessicated down to a campaign table in bfa.
It’s funny because I had to basically restart an account from scratch, and so for kicks built my garrison up to full and found myself doing the same things in game that my daughter was doing nearby in acnh.

I enjoy the whole garrison thing, but blizzard seemed to hate (or believed we as customers hated) the impact on the game and has been more or less sprinting away from the idea with each expansion.

Seems stupid to me, as housing seems to be rather popular in every game that has it (to this dayI can’t figure out why TSW never implemented it).

In case there are any Asheron’s Call vets in this AC too (lol), someone made the mage armor: https://www.reddit.com/r/AsheronsCall/comments/g57bma/hieromancers_armor_in_animal_crossing/