It won’t surprise you, given the current global health crisis, that a large portion of Activision-Blizzard’s first quarter revenue report and conference call focused on the impact and response to COVID-19, which seems almost surreal, given that three months ago the gaming community was still noting the Blitzchung incident fallout and boycott, a weak BlizzCon, mass layoffs in 2019, and plunging revenues for four straight quarters in May 2019, August 2019, and November 2019, and February 2020.

Indeed, that pattern holds for another quarter, as Activision-Blizzard on the whole saw revenues down year-over-year once again, but this time down only 2.2% compared to the same quarter last year, essentially flattened. And once again, the company characterizes it as a much better-than-expected quarter, largely thanks to the popularity of Call of Duty Warzone and stay-at-home measures driving gamers into ActiBlizz titles.

But if you split out Blizzard alone, the company shows a different picture, as its revenues are up significantly year-over-year, and yet it held flat at 32M MAUs, same as last quarter; the execs talked up “continued momentum” for World of Warcraft in particular, saying that “after doubling in the second half of 2019, World of Warcraft’s active player community increased further in the first quarter, driven by both new and returning players, as the team continued to deliver more content between expansions than ever before.” According to the conference call, subs specifically are up too.

We note here that Blizzard has made the claim about the “doubling” of the WoW community with WoW Classic in the last half of 2019 before, but it never claimed the sub base stayed that high; this fresh statement is once again frustratingly ambiguous. We do know that WoW revenue and subs took a tumble last winter following the initial Classic surge. During the conference call last quarter, Blizzard reps hard-dodged explicit questions about WoW Classic’s real retention. This round, when an analyst inquired about WoW subscribers and sustainability going into Shadowlands, J. Allen Brack once again repeated the “single community under one subscription” party line. But he also says Classic remains strong in the East even as quarantines lift and that western players are chiefly resubbing to Retail WoW in prep for Shadowlands. Shadowlands is expected to launch in Q4, so we’re looking at late autumn here most likely.

As for the rest of Blizz? “Each of Blizzard’s key franchises experienced a month-on-month increase in MAUs in March as a result of shelter-at-home tailwinds,” the company says. “Hearthstone engagement improved sequentially, driven by the new Battlegrounds game mode launched in November, and strong execution in live operations. Overwatch engagement increased meaningfully in March and the Overwatch League successfully moved to online play and remote production during the quarter.” Diablo Immortal is still expected to begin “regional” alpha testing mid 2020 (no change here – same outlook as last quarter).

Incidentally, during the conference call, ActiBlizz didn’t sound particularly concerned about the impact of the pandemic and recession, citing the fact that low-cost entertainment market share and revenues actually improved during and after the 2001 and 2008 recessions. It’s possible, even likely, that digital games will continue seeing boosts, hence the raise in revenue outlook for the corporation. Analysts also inquired about the impact on the games as staff around the globe are all working from home; Activision-Blizzard says the shift to remote work was pretty quick, but challenges definitely presented themselves; voiceover work, which has posed a problem for multiple other MMORPGs just in the last few weeks, is mentioned specifically.

For those keeping track of MAUs – that is, monthly active users across all of Blizzard’s games – along at home: 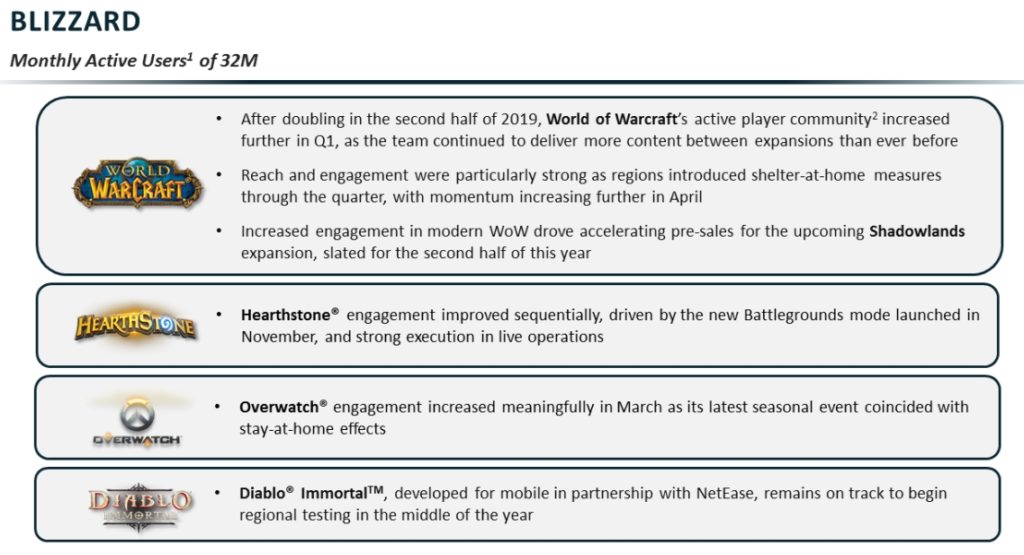