In last week’s column, I mentioned that the start of our Star Trek Online journey would not be done alone, and sure enough I’ve got company with me in the form of my husband. He brings with him approximately two years’ worth of experience in the game, having joined in from launch and playing on and off since then. He’ll be our Sherpa through the new-to-me territory of Romulan space. As for myself, I have about a year or so under my own belt in total, though my playtime has been far more sporadic than my husband’s.

STO and I have always had a very random sort of relationship. Every once in a while, I’ll see my husband taking on a variety of TFOs and get the itch to play again, but I never really seem to follow through. If nothing else, I’m curious to see if playing as a Romulan Tactical Officer will entreat me more to the game or if I’ll slip back into the uniform of my Starfleet Science ship. And who knows? Perhaps I’ll hop behind those controls once I feel muscle memory returning, my husband and I might fire up those old characters again and see if we can’t do a little high-level something-or-other.

But that’s in the far future. For now, let’s take a look at what the starting experience of the Romulan Republic was like. 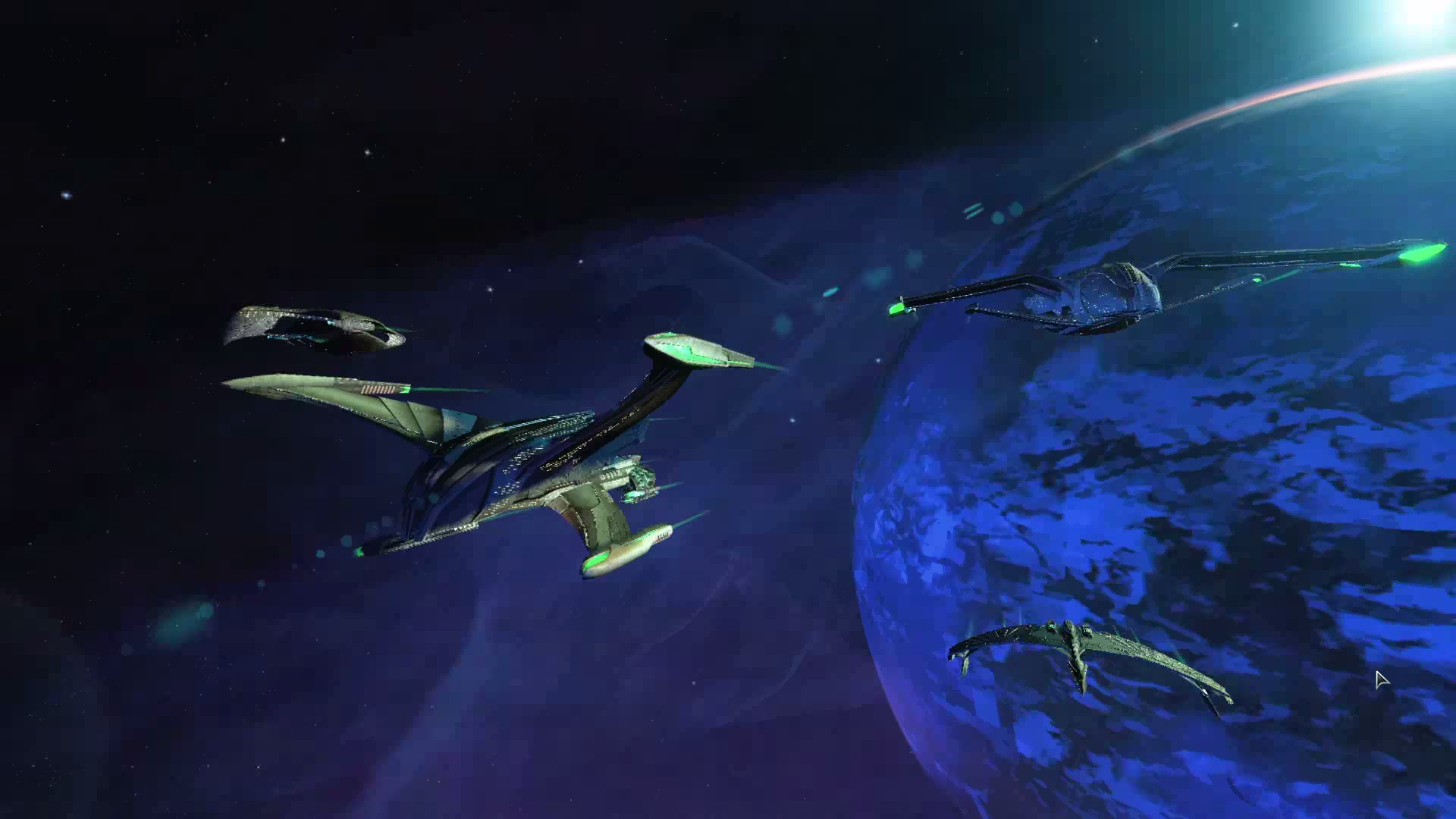 I know a bare little bit about greater Star Trek lore (please don’t attack me), so I know something about the Romulans and their tragic history. So of course, when the starting experience for my little Romulette took place in a thriving colony on the eve of a big celebration, I pretty much knew everything was going to hell in a handbasket soon enough. Narratively speaking, I couldn’t have been more uninvested, but I will say that the opening quests did a good job of explaining how things work.

I was also pleasantly surprised by how simple it was to team up with my husband for these first few missions. There even was an option to sync my level to his to make playing together even better. I came into this game expecting to be locked out of playing with my partner for most of the missions a la SWTOR, so being in a game that actually encouraged multiplayer and MMO gaming was a refreshing change of pace.

What wasn’t refreshing was the game’s combat, but perhaps having someone at my side made things just a hair too simple. It was less like the episodes of The Next Generation I was used to watching and more like a run n’ gun shooter most of the time, with my husband and I gleefully dashing along, chasing quest objectives and zapping every single face that was in range. 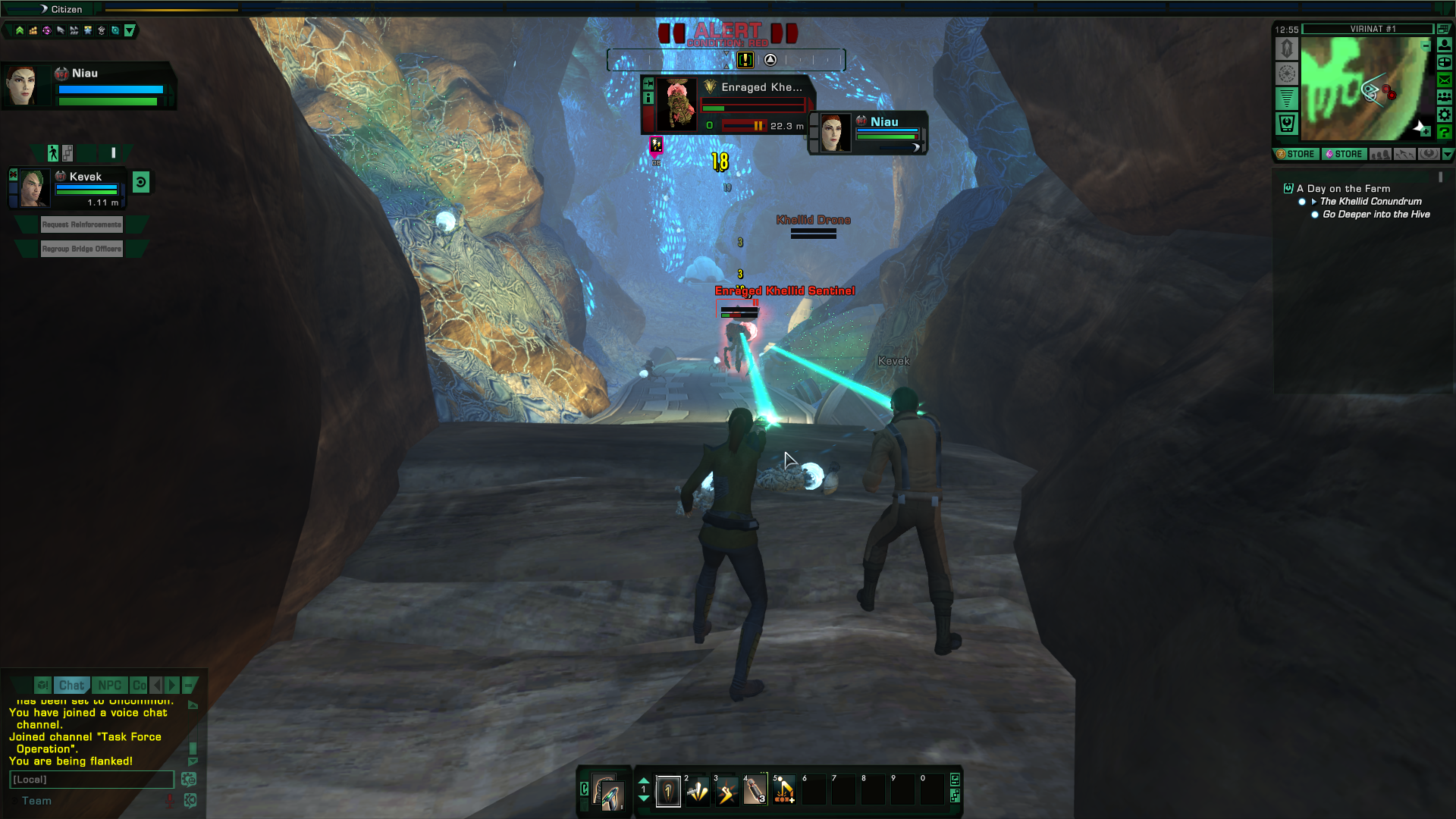 Of course, the inevitable happened and the festival was bombed by some folks who call themselves the Tal Shiar. I don’t know a lot about this particular enemy group, but I do know two things: They are wholly unoriginal villains in terms of their ultimate goal as I understand it now, and their ships look so much cooler than mine.

Seriously, the opening Warbird we both got has a Pontiac Firebird-style eagle painted on its belly. It’s cartoonish.

In any event, the mission continued to unfurl as I expected it to, with attempts at making me feel sympathetic to people I have no emotional or mental connection to. I’m not saying the story is bad necessarily, so much as it’s something I’ve heard before. I’m also not going to pretend that Star Trek in general has been the hallmark of deep narrative, either. Still, it’s a means to an end, as I was taught all of the ground controls and the space controls easily enough.

In fact, as much as I’m bemoaning the goofy story arc, I can’t say that I remember the opening beats I took when I first fired up STO being this well explained. It does come with a fair bit of handholding, but considering the number of things that one has to keep up with especially in space combat, it’s hardly a complaint. 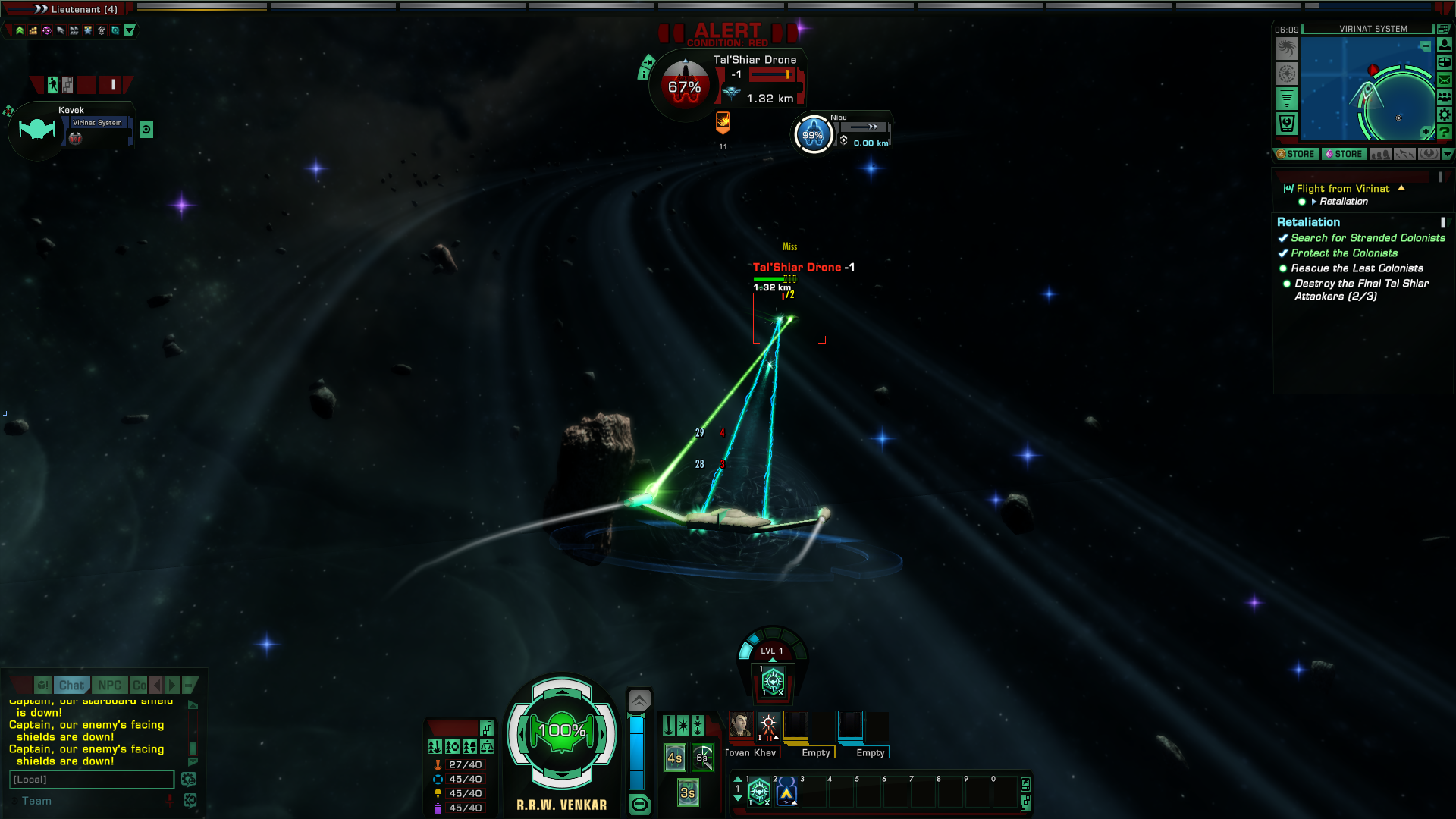 Speaking of space combat, I’ve always loved the way ship-to-ship combat feels in this game. It really toes the line brilliantly between arcade action and naval tactics. It doesn’t do either of these things flawlessly, but the seemingly disparate pieces fit together in STO. Even if my Warbird has some of the worst firing arcs I’ve ever witnessed. Seriously, the cone of effect for my weapons is narrow.

Another thing I didn’t like about our first foray in space combat as a Romulan was the apparent inability to fly alongside my husband during this particular mission. I’m hoping it’s just a case of being locked away from one another due to it being a tutorial level, but it does make me a tiny bit concerned about future co-op possibilities going forward.

Speaking of (boldly) going forward (’cause we can’t find reverse), it’s about time that we open up our first poll question for where our Star Trekkin’ should go. Our playtime was, admittedly, a bit short due to my husband’s job beating him up to the point of not wanting to play much, but we did get to a point that a decision has to be made anyway, so we’ve lucked out. And that decision is regarding the quest chain to follow.

Right now, we’re at a crossroads that I don’t ever recall seeing when I was first playing STO. On the one hand, we’re being offered the next quests in the Romulan Republic story arc (presumably), while the other is a “Promotion” mission that is offering us a new ship but is also guiding us to tougher enemies and bigger challenges.

So that’s the question I’m putting to our readers: Which direction should our twin Warbirds fly off in?

What missions should we follow through with in Star Trek Online? 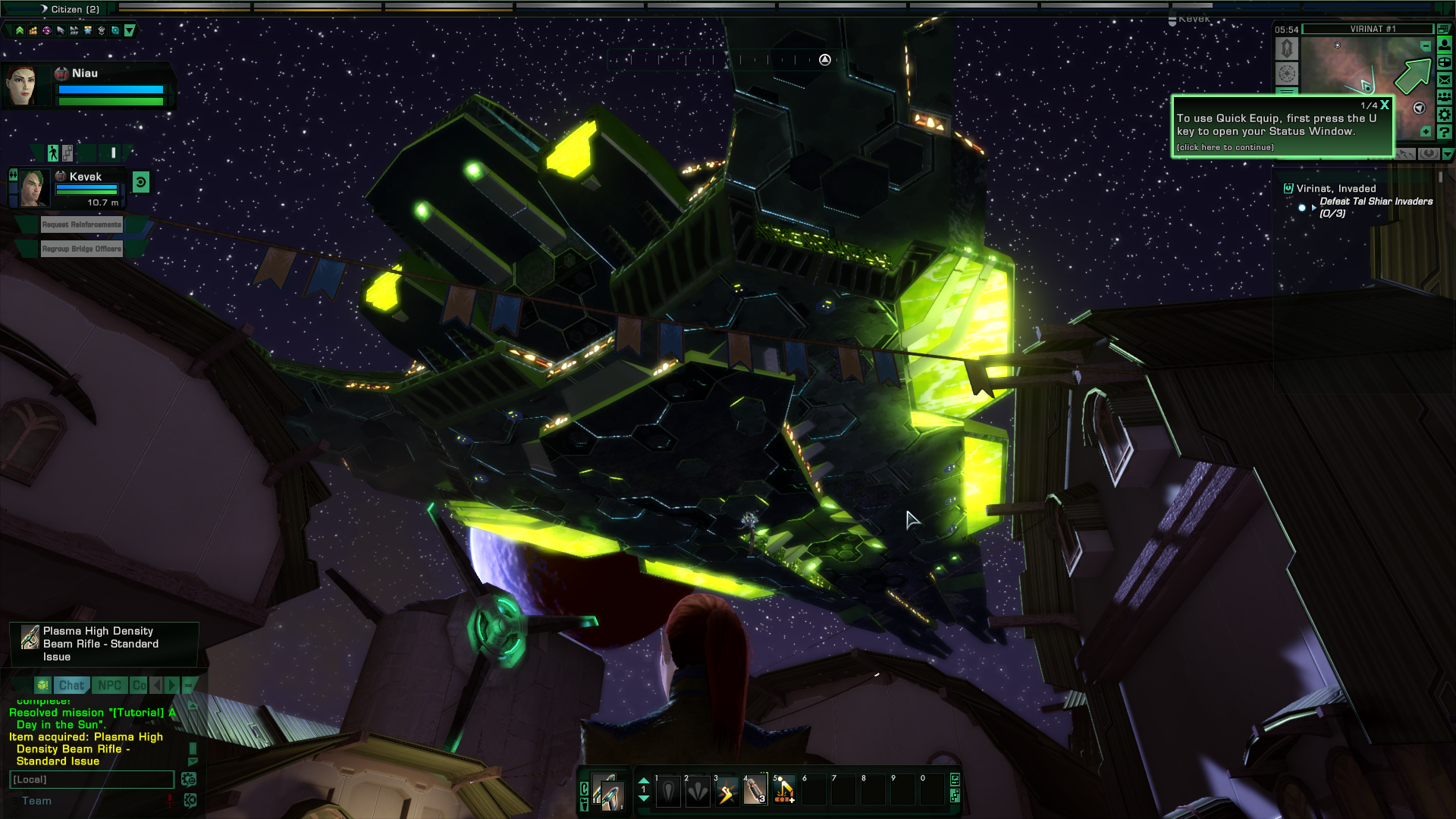 You all know the drill by now: Friday, May 8th, at 1:00 p.m. EDT will be the closing time for this week’s poll. In the meantime, we’re both likely going to bite our tongues and not fire up this game some more. Or at least, I’m not going to. My husband also has a PS4 account and he can play any time he damn well pleases, really.