So the past poll was a 50/50 split, but I’m curious if that’s because regular Star Trek Online players knew what was coming.

END_OF_DOCUMENT_TOKEN_TO_BE_REPLACED
Considering the poll kept myself and my husband at an impasse, we decided to just simply do both. But before we did any of that, we did take a quick moment to join MJ for some Defense of Pahvo fun. It was nice to take part in some larger group action and what was pretty close to higher level action. At least, higher level in our regard, as both my husband and I leaped in to our elder Starfleet characters.

The missions we took on ended up being both interesting and confusing in equal measure, which really wasn’t helped too much by the fact that I hadn’t played my Science vessel in a very long time, so I had to remember just what all of my abilities did. Mercifully, I had backup and, as you can see in the video embed below, we were victorious. Marginally victorious. Simply getting by is victory enough for me, frankly.

The rest of our time together (when we could thanks to work schedule nonsense) was spent trying to find New Romulus. Yes, we wanted to try to get our shiny new ships first. No, it turns out, we couldn’t, which caused us no end of confusion initially. Our Google-fu failed us as well, as we weren’t really able to find a straight answer on just what it was we were missing.

Confused and a little bit annoyed, we pressed on with the rest of the Romulan missions, cutting through the next several story missions to keep ourselves busy. The story itself was kind of tossed aside here, but only a little bit, as I started to pay more and more attention to just what was going on. A great deal of the finer details were lost on me — the Tal Shiar were being moustache-twirlingly evil, trying to blow us and at least one other planet up — but once we got to about the point where we were dealing with Klingons on top of everything else, things in the story got a little more interesting.

At least the story got more interesting, anyway. The space combat remained excellent as always, though I started to find myself a little underwhelmed with the Tactical officer role and what it seemed to mean for space combat. The Romulan War Bird I was flying has cloaking which is kind of neat, and it has this plasma pulse (what we call the Lime Jell-o Explosion) that seemed to do pretty well against ships, assuming I had lined my ship up in the right way for it to actually make an impact, but overall I was starting to get a little blurry-eyed at how space engagements went. It didn’t really help that I had played my Science vessel and got to do all the neat debuffing stuff that does a couple of days prior, which made the differences between the two playstyles even more stark to me. 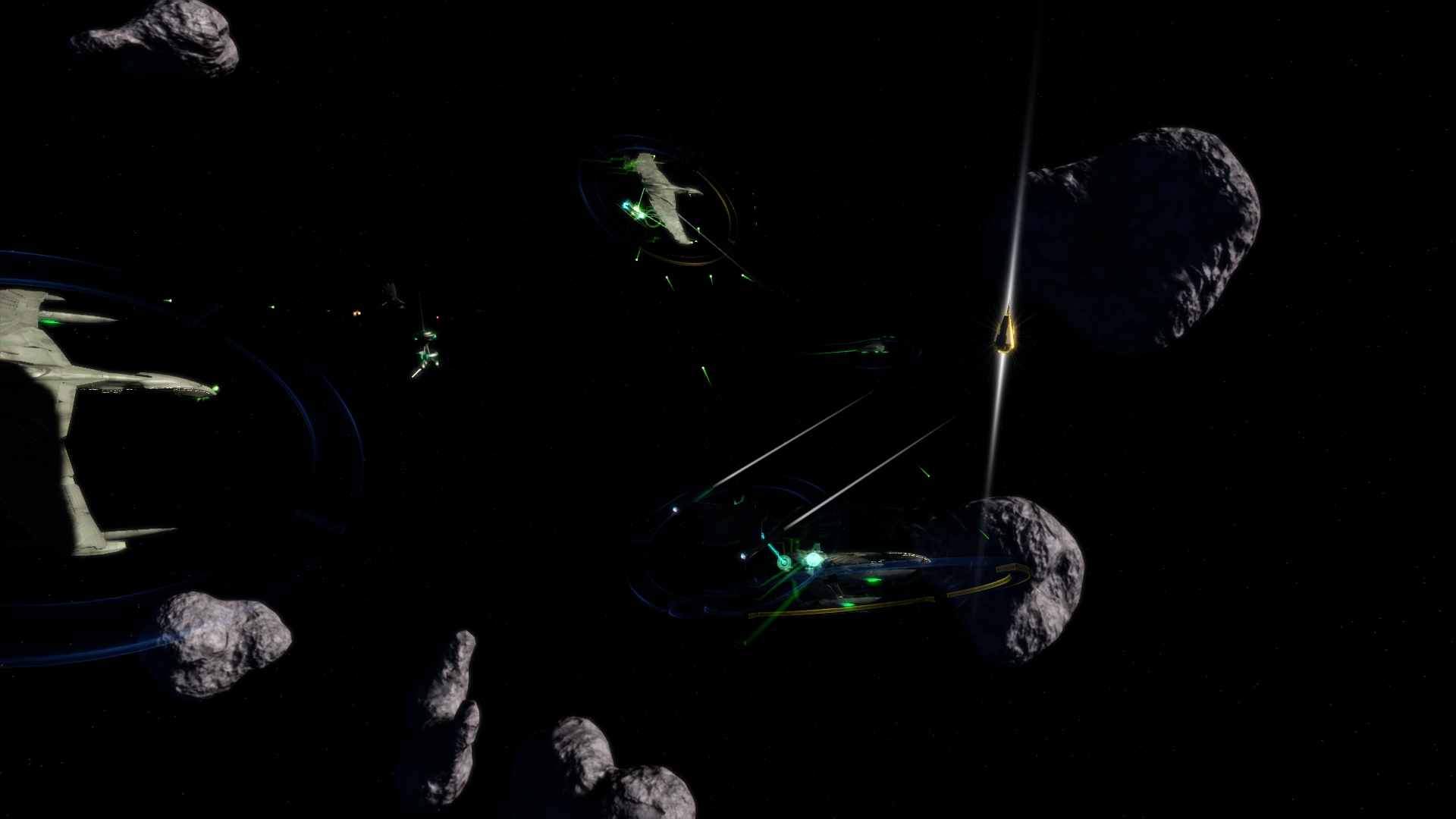 Ground combat was once again becoming the same old boring thing that I was hoping to simply just be done with. Until a couple of things happened that suddenly spiced things up in just the right way.

For one thing, a pop-up help window mentioned a mouselook action camera mode. Hitting the B key suddenly threw the game into an over-the-shoulder shooter combat style, which not only brought some much-needed visual interest but at least the facsimile of more action-oriented combat. Hey, if the soft tab-target shooting system was enough to make Tabula Rasa interesting for me, then this would too.

Shortly after I was shown that fun little trick, the RNG Gods saw fit to bless me with a fresh new weapon. A minigun. I was almost immediately confused; there aren’t miniguns in Star Trek! But here it was, in my hands, and it is the single most fun weapon type I’ve ever used.

Don’t get me wrong, phasers are classic, and laser rifles have their place in situations, especially if one is averse to taking damage, but the minigun is just pure, unchecked, stupid fun. Plus, it has a secondary attack that lets me open up a spray of rapid fire laser madness to enemies in a cone in front of me.

I’m not ready to say that these two new events have made ground combat good, necessarily, but they most definitely have made things a lot more bearable and fun, and anything that zests up ground combat is a plus. 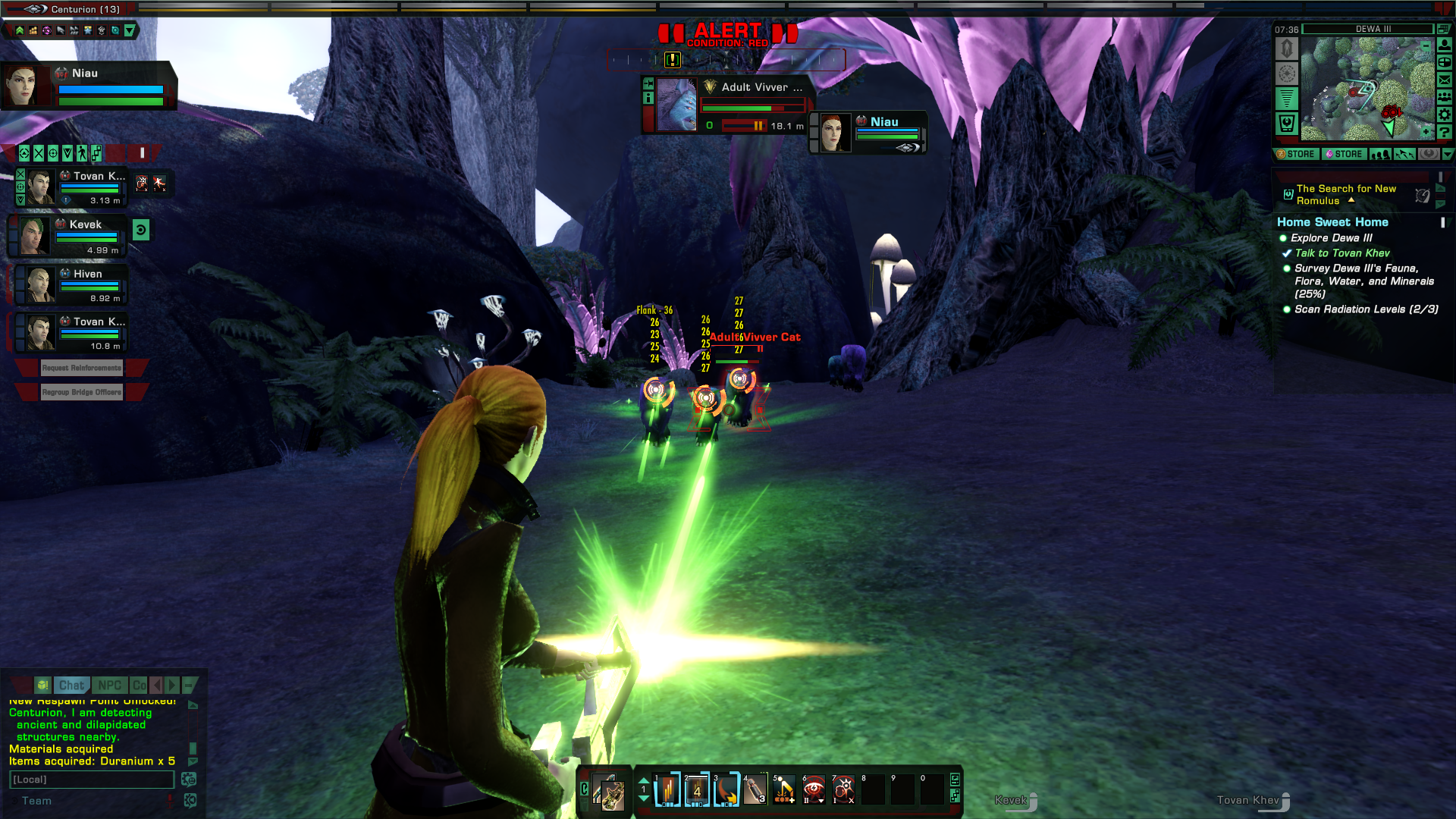 Finally, with a bit of mission work and a pretty interesting couple of twists, we manage to locate New Romulus. So, yes, we had to go through missions in order to get to a point where we could get our new ships. In my defense, though, I don’t recall this sort of thing needing to be done when I played a regular Starfleet character. But then again, Starfleet didn’t have to deal with a villainous splinter faction and a blown-up planet.

We’ve gotten ourselves our new ship (the only one we were allowed to get, sadly), we have allied ourselves with Starfleet (because Klingons seem boring in this game to me), and we’re awaiting our next orders. Which, of course, means it’s poll time!

Having had some time in my old Science vessel does make me miss firing up the old U.S.S. Kestrel again, but we also haven’t taken our new War Birds out for a spin, so perhaps that’s where our focus should lie? That’s poll one: Press on or go high-level?

Should we stick it out with the Romulans?

The next poll is once more about focus. We once again have a bit of a bridging path here, and this question can pretty much apply to either the low-level Romulans or the high-level Federation ships. So help steer our course, won’t you?

What should be our primary mission focus? 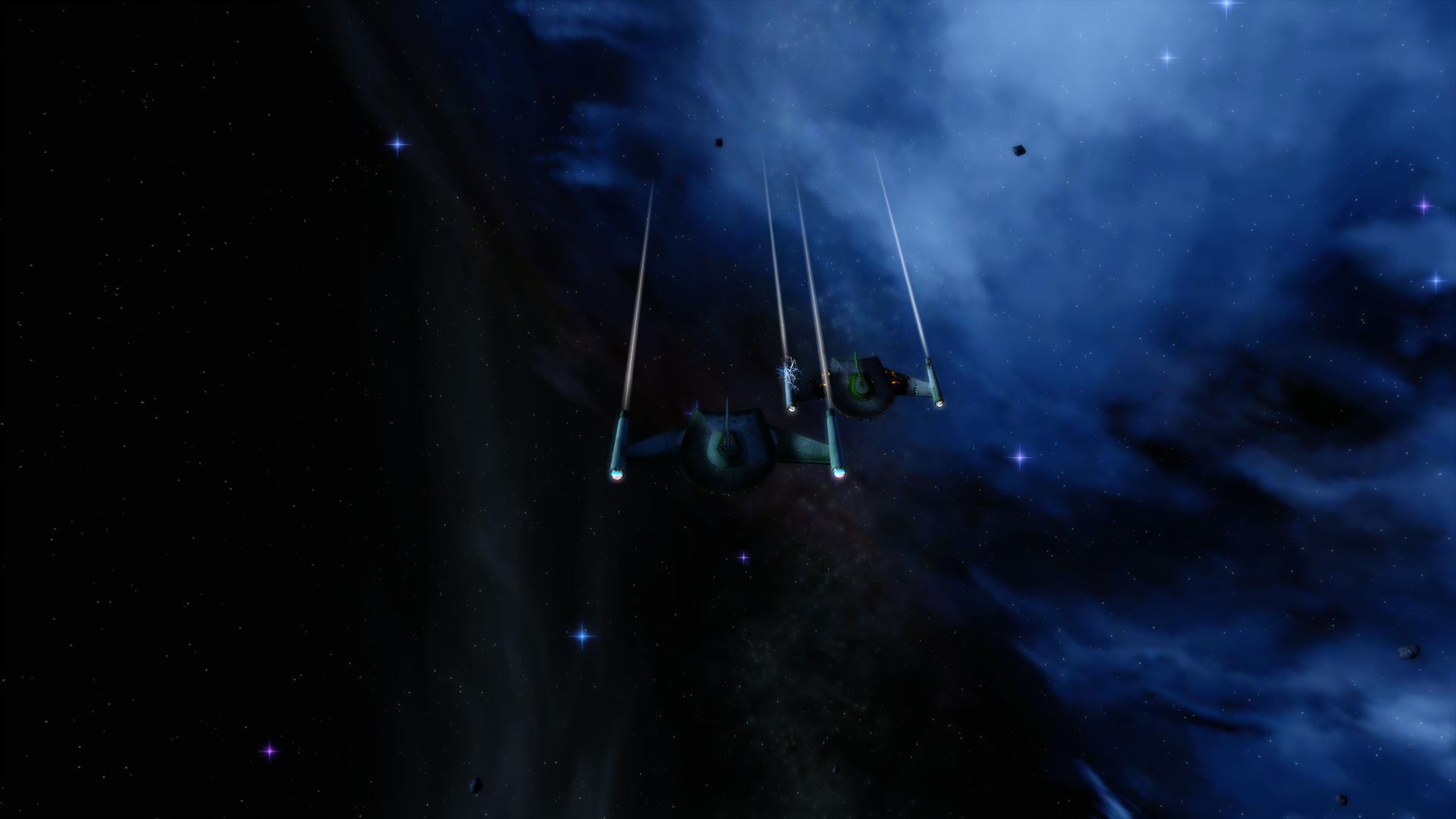 Like always, polling wraps up this coming Friday, May 22nd, at 1:00 p.m. EDT. And this time we’re going to make our shared play time happen. I’ll make sure my husband gets some rest and is relaxed from his job enough to want to blow up spaceships.