When I first booted up Phantasy Star Online 2, the only way to get to a suite of visual options that included making the game full-screen was through the launcher itself. Furthermore, it had two choices — “Apply” and “Initialize,” both of which read about the same to me. As it turns out, however, “Initialize” here meant “Reset to Default.” This isn’t the only example of some weird design choices that likely resulted from this game’s age, but it’s one of the first I ran in to, and it’s been a throughline for my time in this game ever since.

Naturally, I should expect some of that old school jankiness. This is, after all, effectively a port of an eight year-old MMO from the console days, not an HD remaster. And I’m certainly no stranger to the old way of doing things; I cut my teeth on this genre by playing EverQuest Online Adventures on the PS2. At the same time, this game is not just a product of its time, but often feels like it’s past its freshness date. 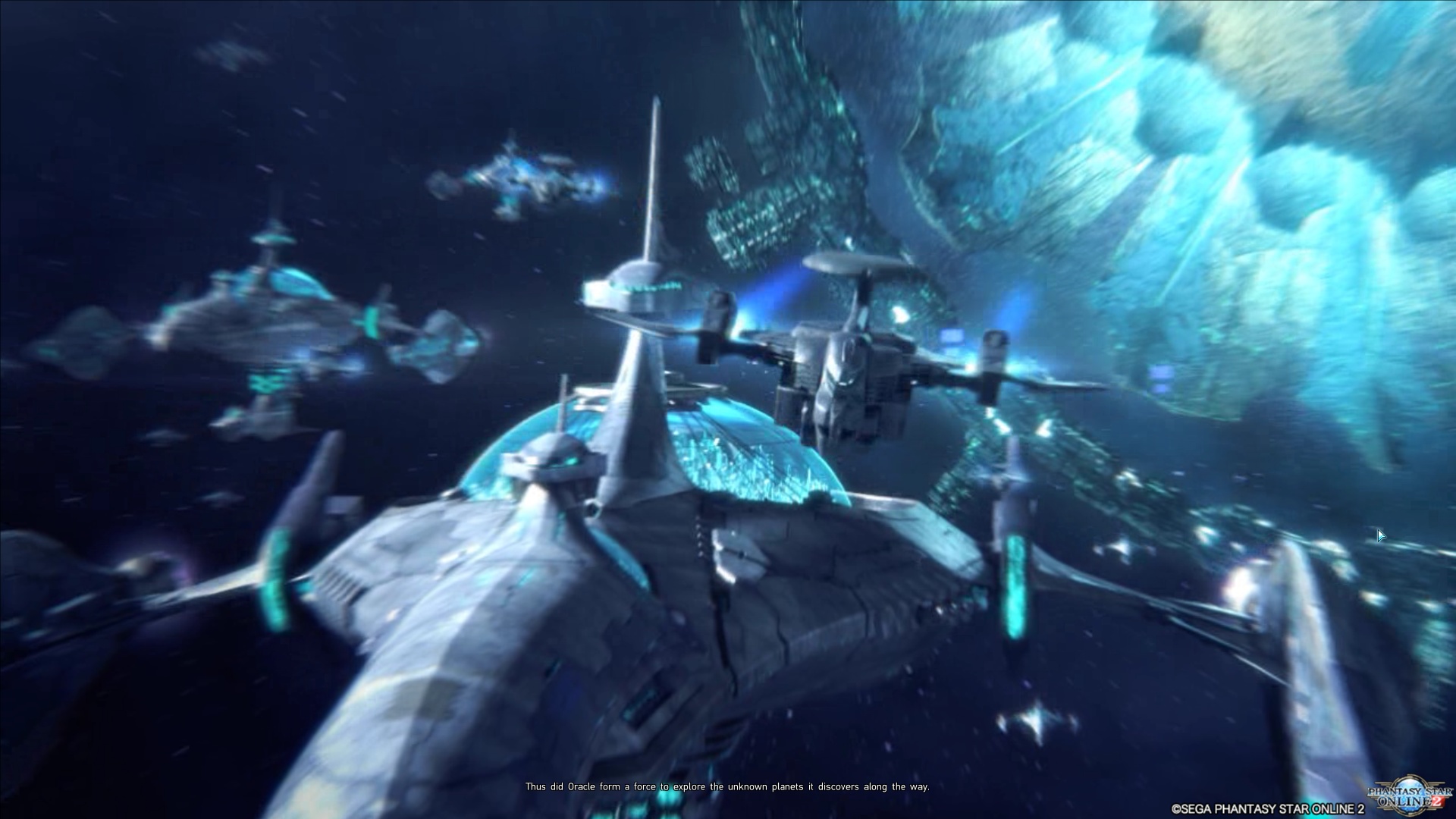 When I talk about PSO2’s missteps, I’m not referring to its awfully handled launch. That’s been documented extremely well already, both by us and by our readers.

The problems I ran in to all were linked to the game itself, both in terms of its middling presentation and confoundingly arranged quest structure. We’re not in a themepark, nor are we in a sandbox. We’re in a space lobby that struggles under the mere ability to display actively running players, though that is due to be fixed. We have a UI where the ability to automatically equip your best gear is hidden in the “Customize” section. We’re in a game where questing is picked up from desk clerks and story is played out in a bunch of brief cutscenes that you watch with an occasional moment of combat interjected. You actually don’t get all of your appropriate quest rewards until you go to a certain menu.

Basically, getting to do anything in PSO2 involves wrangling the worst part of menu-heavy MMO navigation dressed up for a really goofy anime convention. A bundle of annoyances that were there in the game back then because, presumably, not many folks really knew how to do better then. 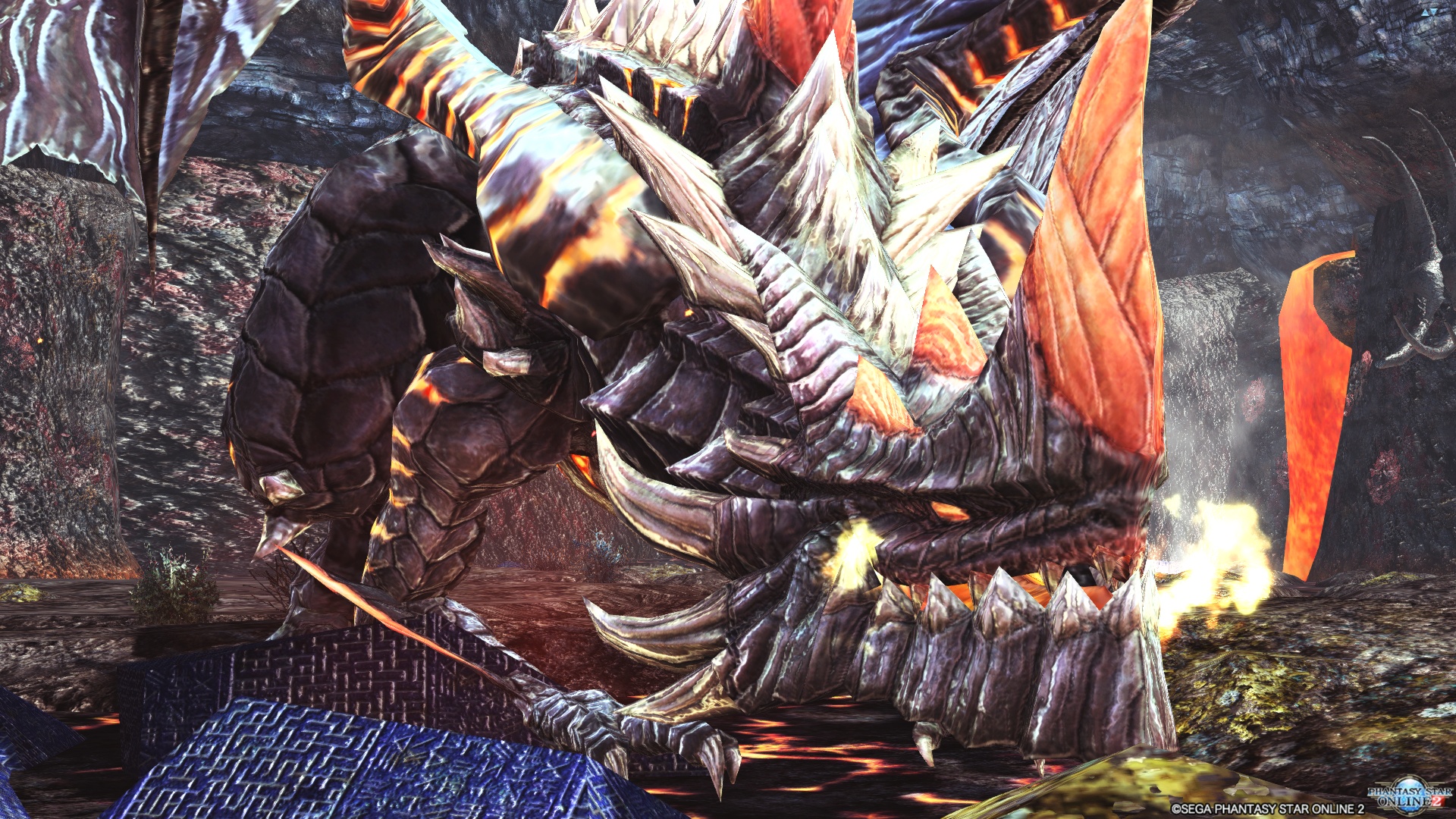 But then, you do finally get to a point where you get to do stuff and some of the fun is definitely found. “Questing” here usually means navigating through a series of tunnels of differing biome types killing enemies as part of an objective or getting through to a final boss fight. If you’ve ever played something like Kritika Online or even Dungeon Fighter Online, you know what you’re getting in to.

That said, while the dish isn’t deep, it’s plenty of fun, and I had a good time learning the ins and outs of my chosen class’s weapons. There is a lot of active combat to be had here, but it never really felt too taxing without being extremely dull; a perfectly suitable and respectable middle ground that culminated in enjoyment.

The best part of PSO2’s combat usually involves the boss fights. While the first couple of them are certainly pushovers, some of the later ones I experienced involved some fun mechanics and required a bit more finesse in attacking the right spot for maximum damage or using dodges and block moves more intelligently. They’re very much like TERA’s BAMs in terms of combat feel. 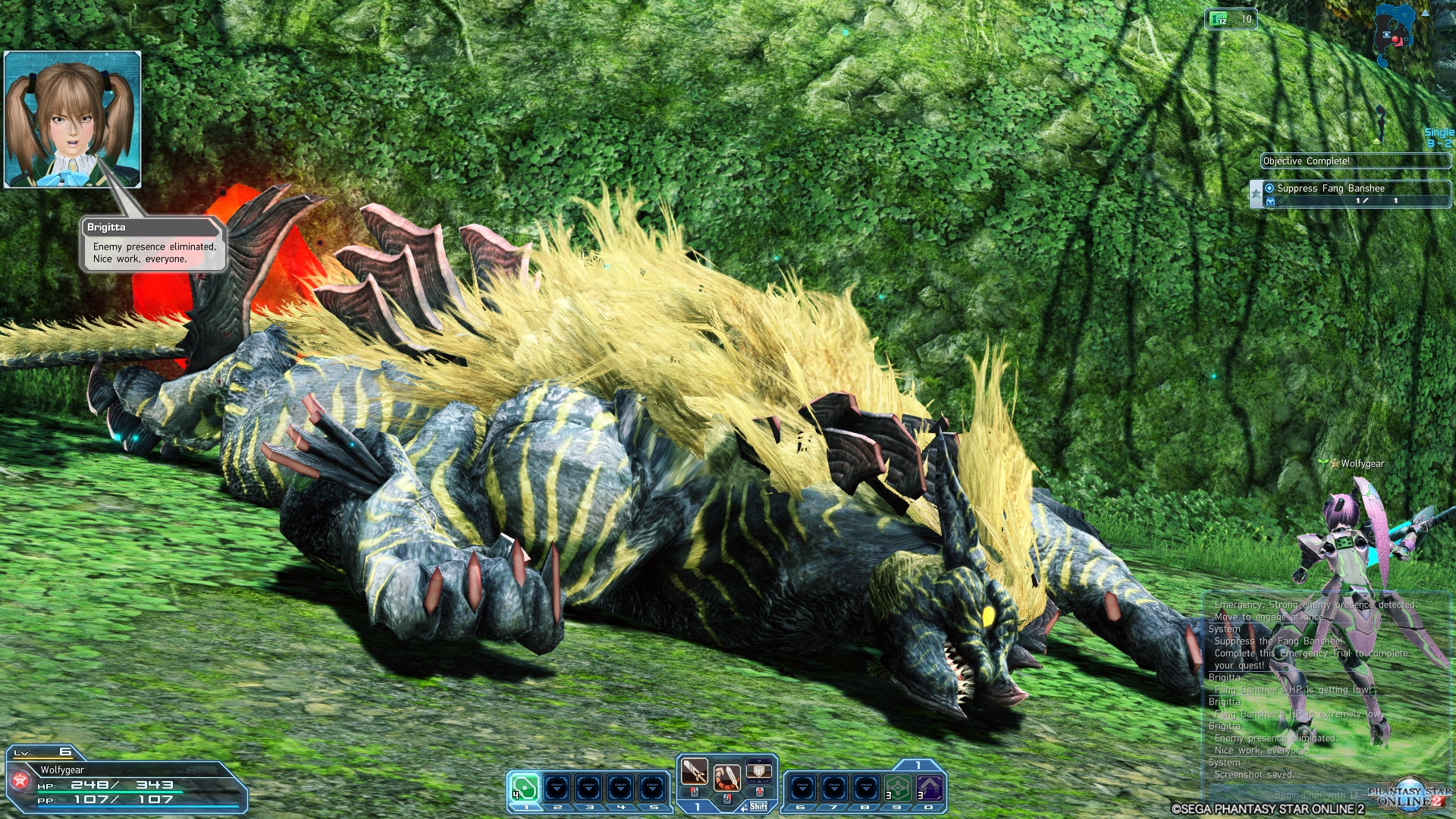 That fun was frustratingly upended by the way the game’s progression seems to be laid out. There’s a braindead tutorial as you’d expect, but then other systems are learned through “client orders,” which is another way of saying “side quest.” Worse yet, a fair number of these important tutorials are handed over by Afin, an obnoxious little twerp of an NPC. On top of all of that, many of these client orders are where a lot of other important tutorials are hiding. I never would have known about gathering items if I didn’t read up on the fact that I had to visit a cafe first. There are even some side quests that provide more full details on how to be any of the game’s different classes, but that wasn’t known to me until a little while later, and it didn’t seem to be pathed too well to me.

Once I started getting over the weird tutorial arrangement, I started to tackle some of the other layers of character progression. There’s a skill tree that helps you truly grow your character, but feels about as weird to use as the one in Blade & Soul. There’s a system to enhance your weapon and apply affixes from other weapons which I appreciate. There’s this thing called a Mag that follows me around that i can feed it weapons to grant boons and keep its energy up, but it never felt really impactful and often felt like it was more trouble than it was worth. At level 20, I unlocked sub-classes, which adds stat bonuses, more skill options, and more skill tree stuff but not too much else, a la Final Fantasy XI.

All of these interlocking pieces hooked me with varying degrees of success, but on the whole I still feel like more than a few of them are unnecessary. Very often, I just ended up hitting recommended choices in the skill tree in the interest of having one less monkey on my character’s back. 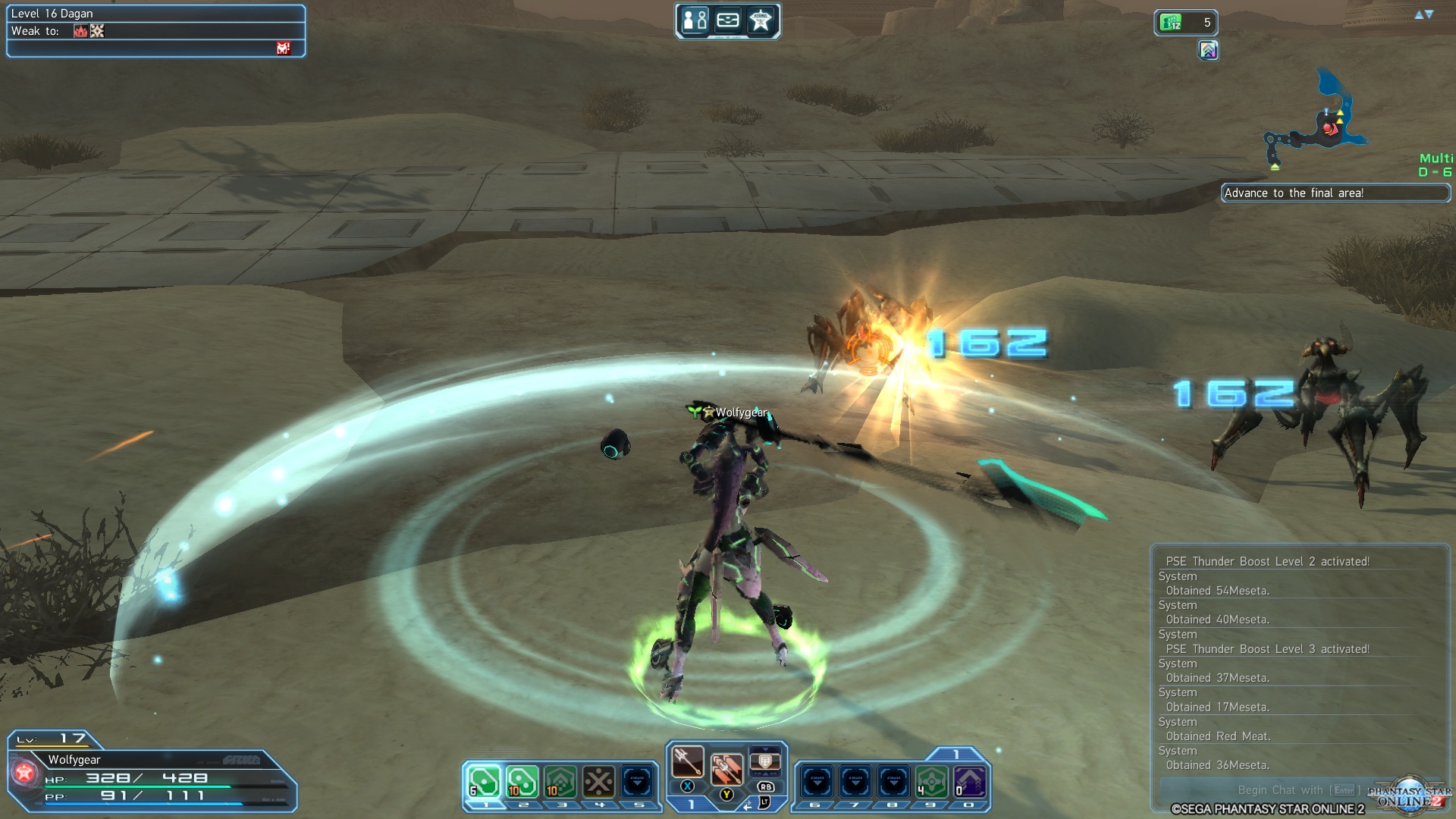 While PSO2 does have a pretty large swath of things to do, like main quests, sub quests, client orders, and more, all of which have progressively harder versions of themselves. However, it all really does boil down to entering a biome and running through the tunnels to kill things. There were a few things that injected some fresh fun into the fighting, though. In expedition quests, for example, where the objective is to go around an area until you fight a final boss, there often are little events that spring up which have the same sort of appeal as events in Guild Wars 2.

Also, the area you run around in can often have other players arrive to it out of nowhere, assuming you set the quest’s permissions correctly at the counter. This is fine enough, except it doesn’t seem to take level disparity in mind; there were more than a few instances where players who were well ahead of me in terms of level joined in my lowly newbie expedition.

Another bit of fun were Urgent Quests, which sort of go off at seemingly random times. These tend to be large-scale instanced affairs, the two of which I was able to experience first-hand involving defending structures from waves of enemies or taking on some pretty big boss critters. This, once again, let the delight of combat shine, and being in larger actions with a bigger group of people was a good time, even if I didn’t really feel like I was contributing all that much. 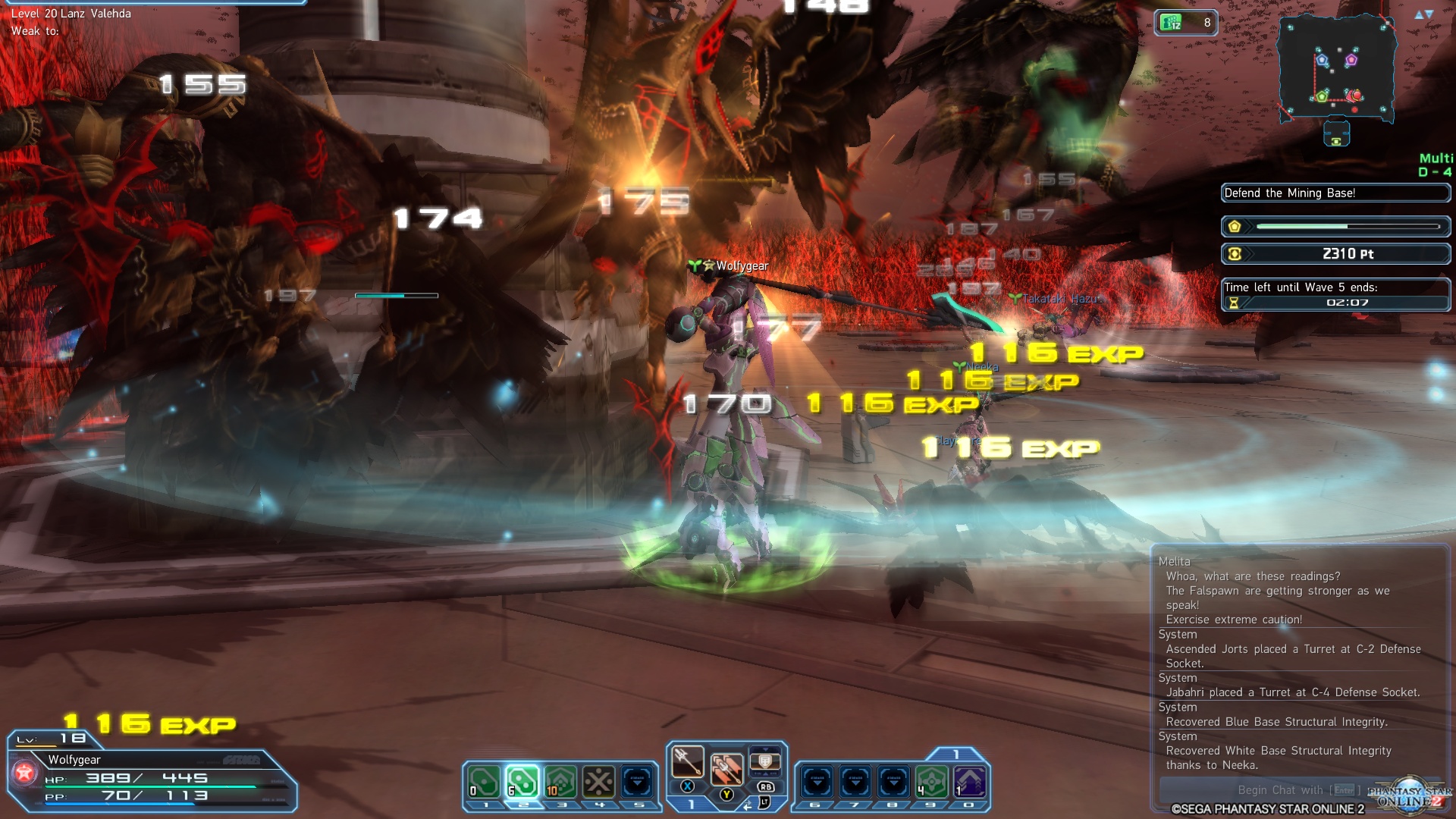 There’s fun fights, there’s a pretty and enjoayble casino, I watched a concert, and at one point during an expedition I had to fight a really huge adorable kingly bird mascot. There’s also a throwaway story, some general mission tedium, not extremely great progression pathing, and the creeping dread of feature overload that started to seep in when I got to the point where pets became a thing. And it’s all wrapped in a very old menu-powered experience that is hard to really ignore entirely.

Perhaps, given time, I will get over those old design choices, but with so many other games out there doing some of the things PSO2 is doing in a more streamlined fashion. The fact that I referenced a bunch of other MMOs over the course of this piece is really not by mistake — it’s really hard to wholly recommend over other titles. Especially since the game’s launch is already throwing up roadblocks for people. I can only imagine that threadbare patience will be worn out almost immediately when diving completely in.

After 20 levels of one class and about 14 or so more levels total in two other classes, I’m not sure that PSO2 is completely worth the hype or worth the hoops to jump through to make it run. 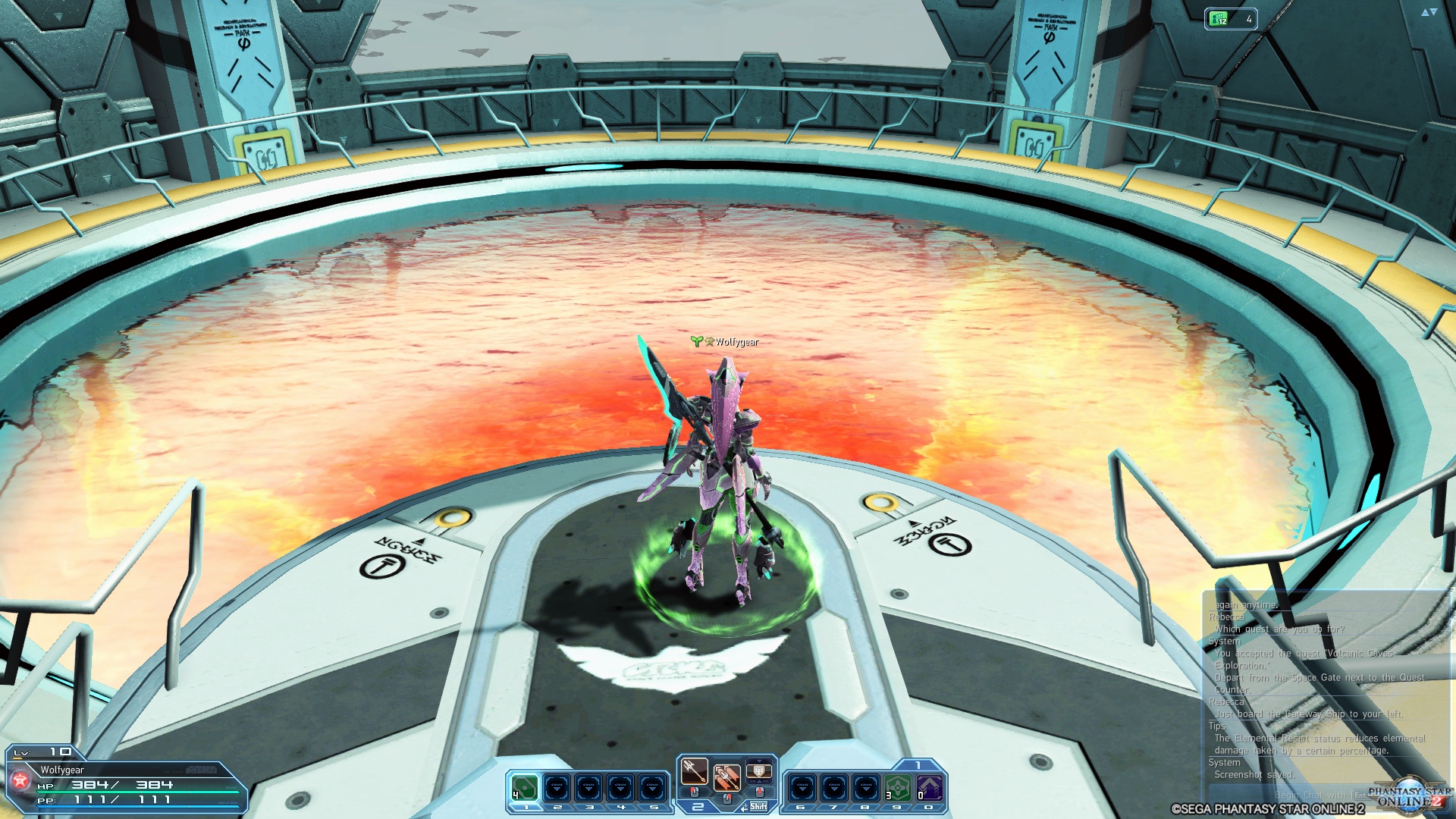