A couple weeks ago I was preoccupied with leveling up my Frostweaver in Crowfall and completely missed out on the Dregs campaign that was running at the time. Fortunately for us all, a new Dregs campaign was spun up and this time I was able to get in there and get a piece of the action.

Completion of the Dregs campaign was the last major gameplay system missing according to ArtCraft Entertainment. So it came as no surprise last week when J. Todd Coleman posted that Crowfall is officially moving from a pre-alpha stage of testing to alpha. Anyone who has played the game recently knows that this was a bit overdue. The game has come a long way in the past year that I’ve been playing it. In fact, stability- and features-wise, the current version of the game is leaps and bounds ahead of what it was just last year. Coleman himself mentions that they likely could have advanced it earlier.

So with the final pillar of Crowfall’s vision of the game in place and pre-alpha behind us, let’s explain what the Dregs is, how it plays out, and where the game goes from here.

At this point we’re all fairly familiar with RvR: three factions fighting it out over keeps and other territory. The Dregs’ take on RvR is to remove the arbitrary faction grouping and instead rely on the players themselves and their guilds. So, rather than three factions warring each other, you have several dozen guilds (there were 30 guilds that earned points in the latest campaign) fighting.

Of course, on paper this always sounds so appealing. My guild and I are going to team up with these three guilds and be sure that we can take down the big goliath guild. In this way it is very similar to the campaign I’m currently playing out in Starborne. Guilds in Starborne are capped at only 15 members, so in order to succeed we need to build up mutually beneficial relationships with other guilds. It works well since there are several different win conditions. We take the Dyson sphere victory while they take the win for the largest territory.

In Crowfall there are two different scoring methods currently: divine favors where guilds compete over rotating achievements for points and conquest, which is your standard point system whereby points are earned for holding keeps and the like. 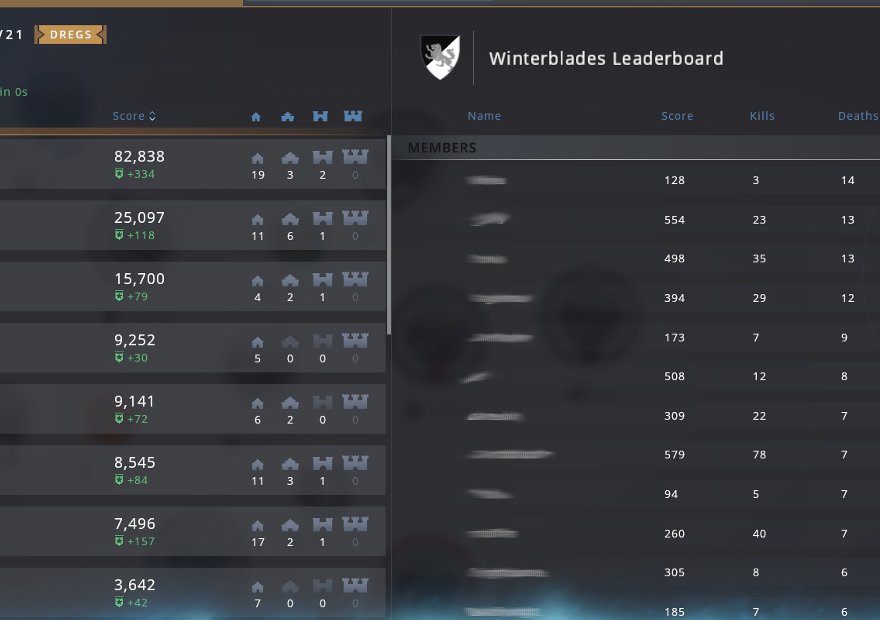 An RvR by any other name

The Dregs includes features you’ve come to expect from RvR type of gameplay. You have your zerg versus zerg near a keep. You have zerg versus a couple random players farming for crafting materials. And of course my favorite, zerg running from keep to keep looking for a fight but only rolf stomping some harvesters.

Kidding aside, there are some tasks players familiar with RvR will find to complete. From the bottom up, there are camps and outposts that small groups and even solo players can capture. Speaking of, I mentioned in my Frostweaver piece about some of the improvements to gameplay ACE has made, but somehow neglected to mention the removal of NPC ranks for actual levels – thank the gods. When you see an NPC now, you actually have a logical inkling of how strong it actually is.

After capturing some camps, there is also the tried and true caravan escort. They spawn at named points of interest on the maps. Simply guide the dolyak, or whatever, to your keep and earn some loot for your guild.

Then, should your guild take a keep, you can build it up and routinely upgrade the crafting stations and other buildings therein. It’s a nice feature that adds a little bit of player agency to the formula.

Now, since everything within a campaign is contained (minus the vessel and a small amount of loot you join with), it does feel like players need to really put forth some effort into crafting. For the most part you aren’t able to simply start off with everything you’ll need for the whole campaign. It’s actually beneficial for members of your guild to focus on crafting and gear up the troops. So if you are looking for some activity other than just smashing faces, crafters are incredibly useful.

The experience is a little too familiar

Despite all the upsides to the Dregs, I hate to admit that it just wasn’t landing with me. As I ran the caravan or moved through the maps, I couldn’t help but think to myself, “How is this any different than the other games I’ve played? What am I really getting out of this?”

It’s a nagging feeling, and as much as I enjoy moaning and groaning and causing a scene; I really don’t love to be that guy. Up to this point, it is clear that the team over at ACE is listening to the playerbase and constantly improving Crowfall, and I hope that continues because it’s still missing that special sauce I need to really sink my teeth into and keep coming back for seconds.

One regular comment I see from fellow testers is that once the game goes to beta and the population grows, the systems that are in place will suddenly work great. However, even with a bigger playerbase, the straight conquest-style GvG isn’t going to be what takes the game over the top into greatness. It’s going to be a unique world, with gameplay that isn’t seen in other MMOs. It’s going to be taking the lore ArtCraft has created and tying that into gameplay elements that resonate and stick with players. It has to be something that provides us with truly memorable experiences.

The conquest side of the Dregs doesn’t need much more explaining, but the divine favors are something that could be great. It gives another avenue of competition to the campaign. And the way the victory conditions rotate is also interesting. 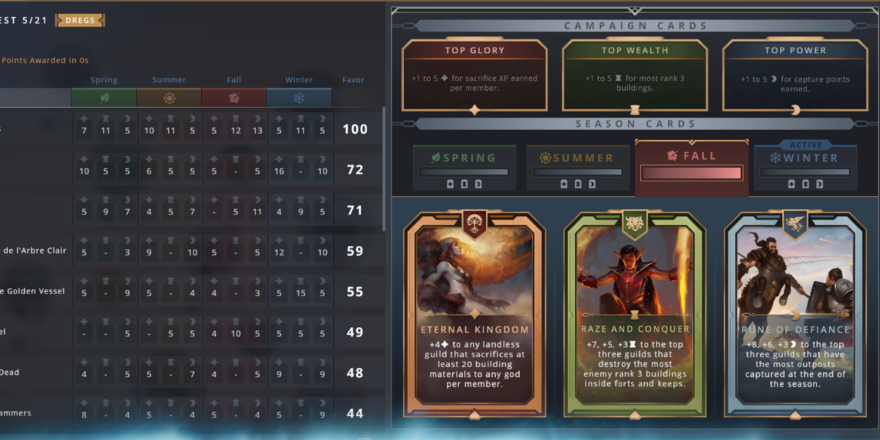 The campaign cards remain throughout the whole campaign, where the season cards will change between the four seasons. It’s a nice mechanic that adds some variety to an otherwise simple game.

On the downside, it isn’t clear to me (and from browsing the official forums I see it isn’t clear to other players either) just how important the divine favors are. I think making it an entirely separate avenue to victory would make the most sense, as opposed to just being another part of the conquest victory.

Crowfall should take advantage of its unique lore elements

The divine favors are one element of lore that ACE has created gameplay around, but I’d like to see more. Now, it doesn’t need to be a victory condition; it could be an alternate method of conquering or baiting your foes.

For example, use the Hunger as a means of pushing other guilds around. The Hunger has a bit of a Game of Thrones’ white walkers feel to it, but it also reminds me of a boardgame called The Arrival. Without getting into the nitty-gritty of that game, I will just say there is a strategy where a player can choose to give herself some negative corruption by actually placing monsters on the board in hopes they attack and conquer your enemies. Then, you can either try to retake the land by fighting the monsters or simply expanding in a different direction. It’s a risky strategy but it can help you turn the tides in your favor if done right. If we had some means of moving or placing Hunger on our enemies as a comeback mechanic, that could make for some interesting moments.

As MMO gamers, we’ve played RvR and GvG before. We’ve zerged, we’ve built keeps, and we’ve escorted caravans. So let’s add something we haven’t seen before. Let’s keep innovating and taking this game to the next level.

Well, if you were interested in the final piece of ACE’s Crowfall puzzle but weren’t sure exactly what that entailed, hopefully I’ve enlightened you. I think the game is arriving at a point where we can see how the elements fit together to make a cohesive game. But do you think that Crowfall’s different campaign styles culminating in the Dregs has what it takes to make it one of your primary MMOs? If not, what could it do to get over that mountain?

They need to look to Path of Exile and Diablo for inspiration.

Procedural is the name of the game for Crowfall. The worlds are procedurally generated.

They could add a couple skills like “Treasure hunting” or ” Portal summoning” that end up opening procedurally generated mini dungeons POE or Diablo style. This could tie into your thoughts on lore expansion as players could delve for lost relics of the gods to score points in the overall world score and would allow for random bits of lore to drop.

I know, I know. Crowfall is a PVP game, but there needs to be other game hooks besides just RVR and crafting. No one wants to RVR all the time.

Just carrying the torch of procedurally generated game effects into the realm of some light PVE content can only improve the available adventuring options.

Win conditions sound interesting but players trying to survive and thrive in a dangerous and challenging world is more appealing. A winner means too many losers.

If ACE doesn’t move quick and make changes where necessary, yes it could be a real pain and result in the same guilds winning all the time (which is what’s happening now and has been for a while).

When I think of games with campaign servers, I tend to think back to Earth:2025 and the like. Even Starborne is in that same camp, which is probably why I’m so hooked to it. Playing a campaign for a month or two where a winner is declared, it shuts down, and new ones start is appealing to me.

“One regular comment I see from fellow testers is that once the game goes to beta and the population grows, the systems that are in place will suddenly work great.”

This *NEVER* pans out.