Here’s a player housing pro-tip that is useful when striking up a settlement in a risky location: Make a door. A big door. A big door with a lock and that little robot gatekeeper from Return of the Jedi who was rude to C3P0. Because if you don’t, you’re going to find that the locals are going to solicit every chance they get.

“Being alone at night on Talus in Star Wars Galaxies Legends is peaceful,” said Toy Clown. “Being alone to find you have a visitor when you step out of the house isn’t!”

You know what would have helped with that situation? Door. 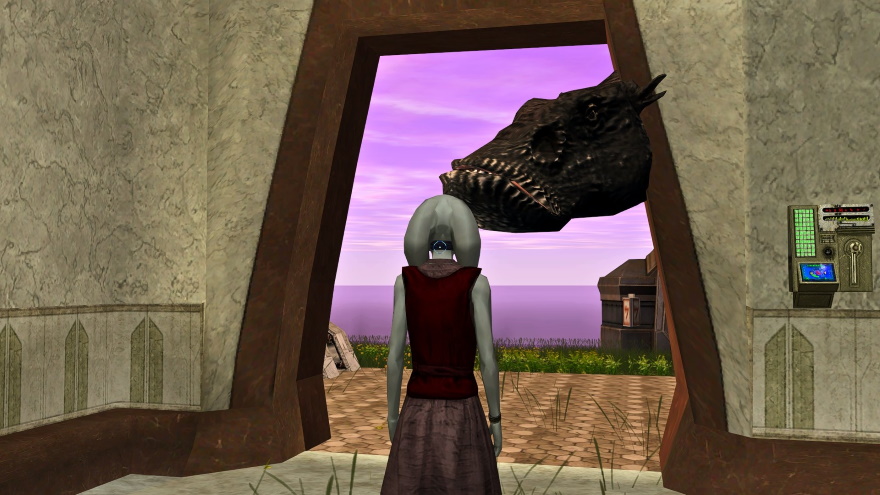 Only in fantasy MMOs can you go around dressed like its Mardi Gras and fit right in with everyone else. I mean, I wish I could wear giant rabbit heads and metal armor suits without triggering alarm among local CVS shoppers, but it is sadly not to be.

JonBuck gave us this FFXIV screenie of a steel rabbit in Eulmore. What’s up, doc? 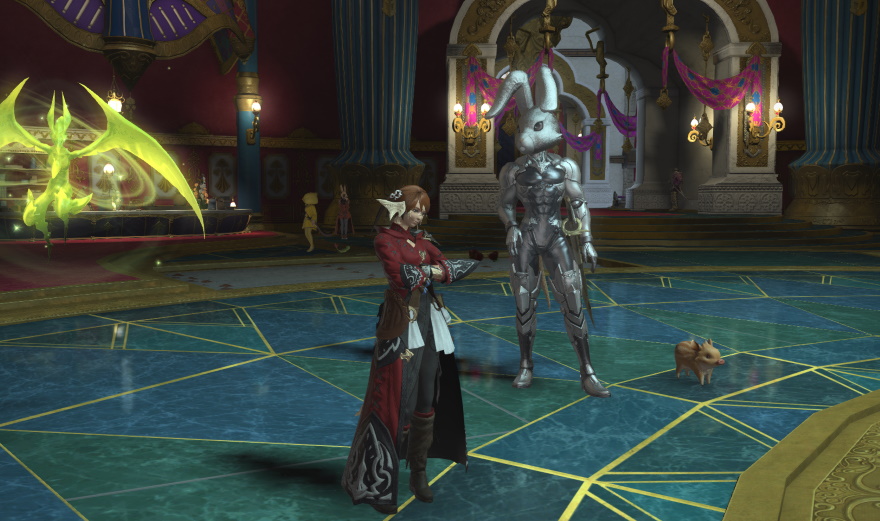 Ryuen began with this Douglas Adams quote: “‘Space is big. You just won’t believe how vastly, hugely, mind-bogglingly big it is. I mean, you may think it’s a long way down the road to the chemist’s, but that’s just peanuts to space.’ And, in fact, it’s so mind-boggling it blew my head off in Elite Dangerous.” 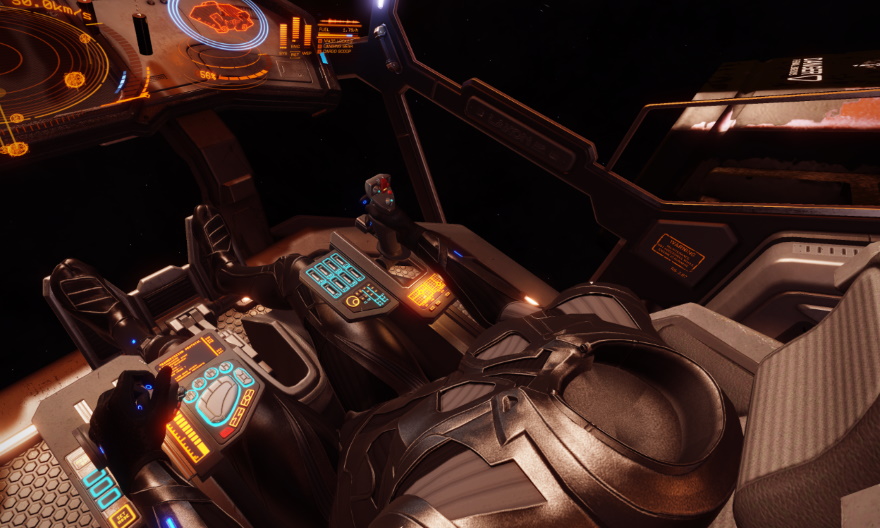 “Archet is small and Lord of the Rings Online is old,” Minimalistway noted, “Still I find this game can be beautiful. “In this screenshot is a Hobbit hunter starting his big adventure.” 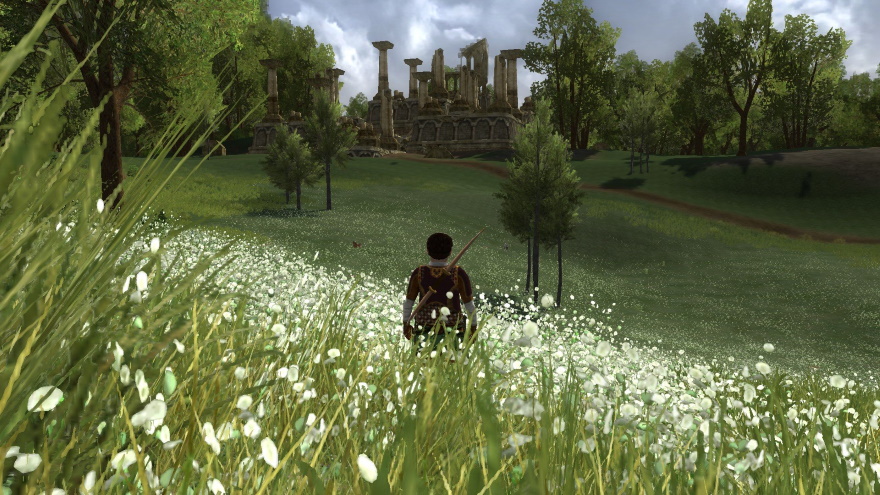 Lucky Jinx took me up on last week’s screenshot challenge to show a “lonely” setting, saying, “Netherstorm in World of Warcraft has always had that depressing feeling of loneliness. Hated questing there, hated going back for this shot, but it was something I instantly thought of when I read the weekly challenge.” 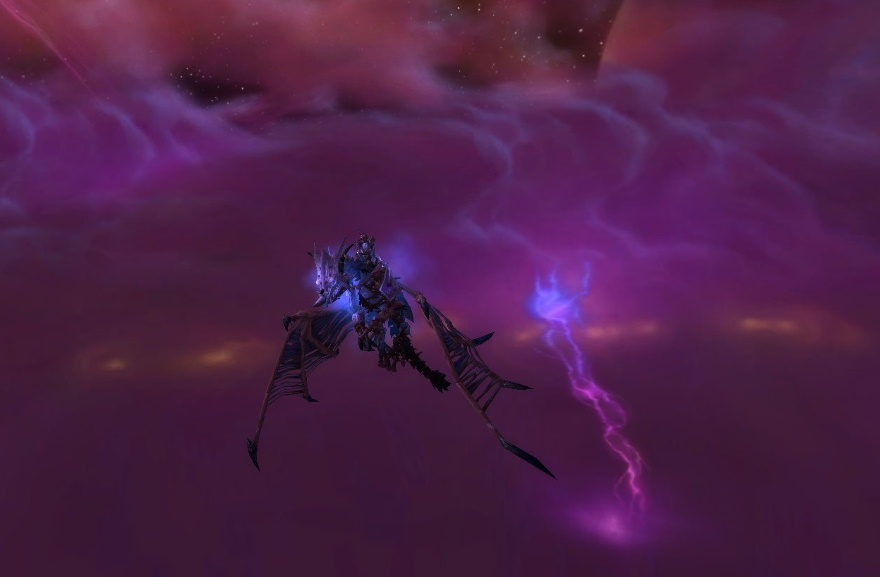 What’s your favorite color? This week’s screenshot challenge is pretty easy: Share an MMO screencap featuring a color you like and tell us about it!

Coming late to your contribution…

…you can never like pink too much. Trust me. <3

Colors hmm? Let me dig into my /gpose addiction.

With the right filters sunlight in FFXIV be absolutely golden.

How to take the UI off LOTRO googlesearch.

This game is fun.

Nice pics, Bruno! And since you were asking, the default key to hide the UI in LotRO is apparently the F12 key.

In happier news, apparently LGBTQ+ rights are still solid in the The Division 2, even as society struggles on the brink.

And hey, even mutual love between rubber duckies seems to be a thing in the game’s world. Yay for love!

Get the same feels. I would not have recommended people in NYC to play Div 1 a few months ago, but when this is all over I might.

Honestly, I think first Division game is a better game than the sequel — better story; better characters; better ambience, all of it.

Some game mechanics are smoothed out in the sequel, but I would still recommend the original game first to anyone interested.

Problem is, I played the pixels off the first game, myself, so there’s no real reason for me to go back to it now.

As you say, specifically, though I find that the first game feels more like a plausible “world” than a game, so maybe Div 2 is a better recommendation for those who don’t want something which cuts quite so close to potential reality at this time.

Hope you and yours continue to be safe and well,

Some pictures from Greymoor.

Nice moody vibe to the pics. Are you enjoying Greymoor so far?

Not as much as I thought I would.

Same. I played it right after Elsweyr and the main story quest line seemed really similar – just replace Dragon with Vampirey things. Actually all of the main line quests are usually predictable.

Although knowing how to get around a few places because you have Skyrim flashbacks is nice when it happens.

The side quests are what stand out to me in ESO across the board. The are short enough to be done in a play session, well presented, sometimes have characters you have worked with before, and can even give you additional info on other storylines.

Good to know. I wonder if the main storylines suffer under some perceived pressure to be “epic”, while the side quests merely focus on being interesting? Just theorizing in print …

Should I presume that your reasons are similar to Zulika’s below? Is it just sort of a “same shite, different day” expansion, or do you think it has other problems?

Sorry to hear it didn’t quite live up to what you hoped. That’s always a disappointment when you’re looking for new gaming fun.

I had a little rant about how I felt in another post, I’ll copy it below.

“My general attitude towards Greymoor is one of disappointment, irrespective of the launch problems.

The writing and the story are poor, without giving away any spoilers it’s very similar to the last expansion.

Wayshrine placement is terrible if you want to do the northern Harrowstorms, I can see player participation dropping off sharply, the same problem with the dragons in Northern Elsweyr. Also, the rewards are not worth the time, there is a reason the dragons in southern Elsweyr are still popular. Increasing grind to make up for a lack of content never works.

Last time I looked, Blackreach was a creepy and dark place, not a technicolour fun palace…Huge mistake to split the map up to such a degree, IMO. People want more of Skyrim, not a bloody cave.

Vampire rework has not gone down well, to put it mildly.

The whole ‘chapter’ just feels small. It’s DLC sized. I do think this ‘year of’ thing they do now does the story no favours.

I’ll stop now, I’ll just say slapping a filter over everything does not make something ‘dark’ and ‘gothic’, it just makes me turn the colour saturation up on my Nvidia settings.”

I agree with all of this too.

Thanks for the insight, Hurbster. I must have missed this post originally, and I appreciate hearing the details of what you think about the expansion.

Be well, be safe!

Now what would that be? o.O

PS: Sorry…that I’ve showed these before – actually quite a few times, come to think of it. But the question of favorite color (or colour) didn’t exclude repeats! >.<

With all the issues i had with Wildstar…

Maaaaan that game was beautiful.

As if no one has noticed by now, I have a tendency to do things in white and blue. Let’s meet in the middle and go for icy blue?

And of course, it’s always sunny where we walk. Is that a color?

Okay, then a final moment in MapleStory 2.

Thank you for the screenshot plug. Hopefully, it fits in the door!

I like all sorts of colors. On my Lahn in BDO, I enjoy this gold color. Each character has a color theme, which makes playing dress-up much easier!

Golden in the grass … by the way, I LOVE your pic from last week, with the giant critter at the door! It looks like he’s asking, “Excuse me, could I borrow a VERY VERY LARGE cup of sugar, neighbor!” Hahahaha :-)

This is how to tell when someone doesn’t really play a game, but logs in every few months for the freebies and admiration of the graphics! When BDO was my main game, I enjoyed grabbing moody and action screenshots while I was traveling all over the map. Now? I rarely leave town, but there are a few questlines I haven’t done, so I’m tempted to give it a traveling go!

And thank you, yes, the large creature looking in the door gave me that mental picture as well! xD

My favorite color? At the moment, Ruby Red…