With the Heidel ball now a memory, there’s much to look forward to in Black Desert Online. Along with a new class and a variety of other features, players can look forward to the upcoming O’dyllita region. It’s not clear when this is coming out, but it’s been on the test server for a couple months now. I’m just now getting around to exploring the zone, so join me in this week’s edition of Desert Oasis as we take a peek at the dangerous land of O’dyllita!

END_OF_DOCUMENT_TOKEN_TO_BE_REPLACED
O’dyllita is a high-level zone south of the Kamasylvia region. In stark contrast to Kamasylvia’s beautiful-yet-dangerous territory, O’dyllita is a very scary and very dangerous land. Those who played through the revamped Kamasylvia questline, which I highly recommend, already learned about the history of the Ganelle and the Vedir. This place is mentioned many times throughout the questline, and it’s usually not in the most flattering way.

But if you missed that, you’ll need some backstory. The Vedir and the Ganelle are the two main factions of elves, which once lived in harmony. Born from the same creator goddess, each faction represented two sides of the same god. Whereas the Ganelle represented the light, gentle side of the goddess, the Vedir represented her darker forces. Mind you that neither side is considered bad or evil. They just didn’t see things eye to eye.

Tensions came to a head when the dark energy, the black spirits, invaded Kamasylvia. It was way too overwhelming. The corruption just kept spreading, and nothing could be done. It wasn’t until a Vedir cast a spell powerful enough to finally get rid of the energy. It came at a hefty price, though. The Kamasylvia tree, the source of power for the forest and the center of the Ganelle’s religion, was forced into slumber. With the tree out of commission, the damaged forest had no way of truly recovering. This resulted in a civil war between the Vedir and the Ganelle – a totally pointless war that caused the spirits of the forest to distance themselves from both factions, further weakening the forest.

Eventually, the Vedir were driven out of Kamasylvia and into O’dyllita. The open war ended soon after, the events of which are covered in Kamasylvia’s main quest. Today, a shaky peace exists between the two, troops lining the border between the two nations.

As soon as I enter O’dyllita, the game’s music takes a sudden change from the wispy, playful sounds of Kamasylvia to the somber sounds of a viola playing in a slow, sad, minor scale. No longer are you in the relative safety of Kamasylvia’s green grass and playful spirits. Massive, thorned branches wrap themselves around dilapidated fortresses of past battles. There’s a distinct silence in the air, the kind when you know that there’s literally nothing there. O’dyllita is literally god-forsaken. The spirits of Kamasylvia simply do not go there. It’s what Kamasylvia could have been had the Vedir not stepped in. 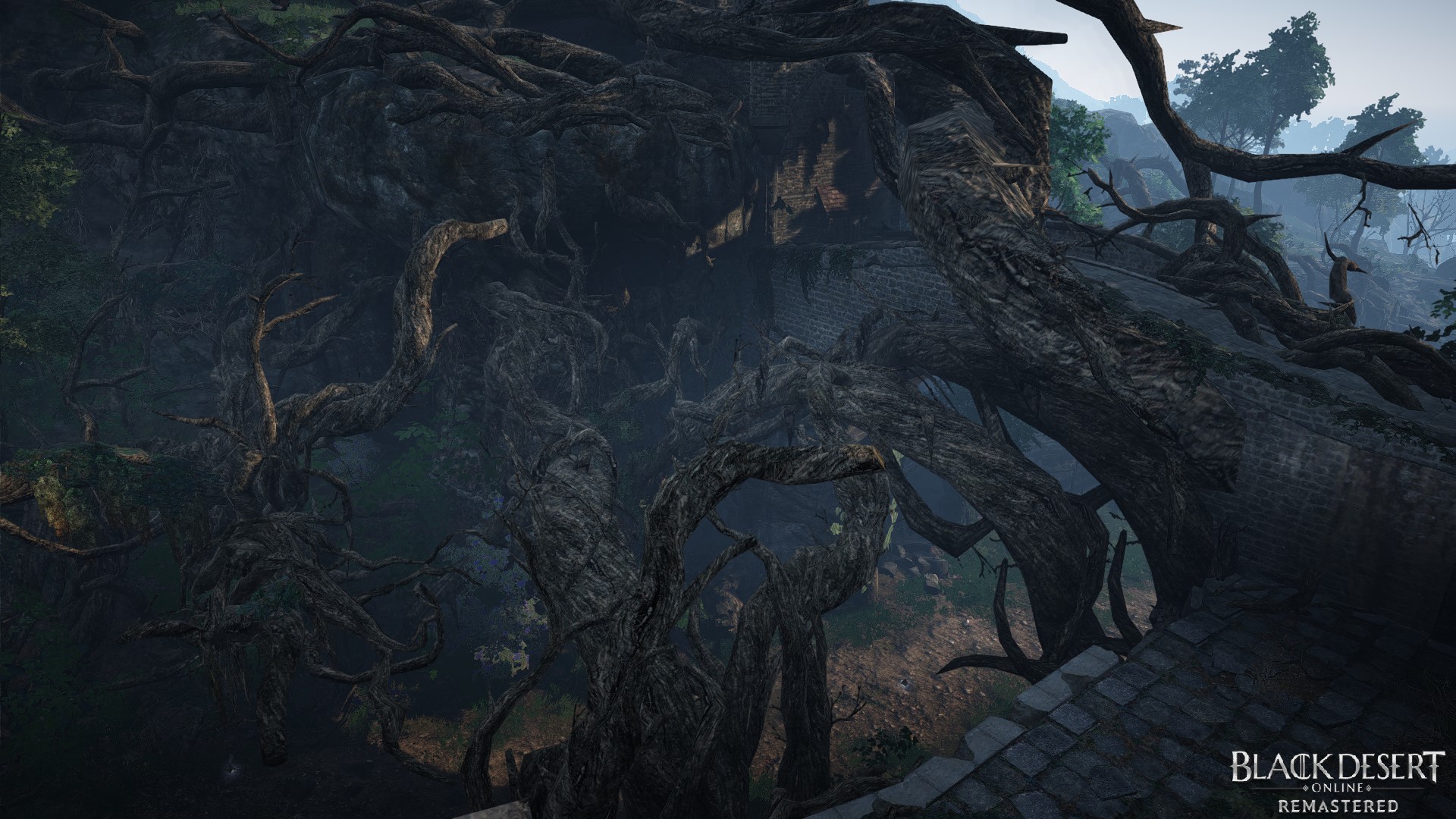 As players enter this desolate place, they’d better be prepared for a fight. A place like this really tests the players’ skill and planning with their characters. I went in pretty stacked with my Maehwa. I brought food buffs, with transmuted crystals in my gear, and my weapons were PEN (+20 enchantment level). But even with that gear, don’t expect to just rush in, do a rotation, and expect a quick kill. These mobs will hit hard, and you absolutely need to know your class mechanics in order to do well. Of course, players going in here will probably have already run through the paces, and since it’s an alternative to areas like Aakman and Hystria, experienced players should already know what to expect.

The grindspots are also rather large; it seems as if there’s going to be enough space for everyone. And while there are definitely going to be the main rotations, there are also plenty of corner spots where a person can fight a mob and make a good amount of money. Pearl Abyss has clearly gotten better at designing grindspots with its open PvP in mind.

Because it takes a while to take down these mobs, players won’t need massive grindspots as they would in early game areas. And in my experience, high-level areas have some pretty chill players. Of course there’s going to be the inevitable guy that flags for PvP (because nobody owns a grindspot, right?), but there really is going to be enough space for everyone in this space. And that’s a good thing too because players will be missing out if they don’t visit!

Going in, I thought I already had a good idea of the area’s vibe. It’s sad, depressing, and cold. But all that changed as soon as I entered the capital. In a complete 180, the music’s somber, lonely music switches to a grand chorus. The dilapidated fortresses, unforgiving forests, and ferocious beasts make way for a beautiful city. A sanctuary from the war, sadness, and death of the outer areas. The real O’dyllita.

Here, the NPCs go about their daily business, shopping for food, weaving clothes, and taking a seat by the nearby fountain. The ferocious gargoyles and giant bears are suddenly not as threatening as they mingle with the people. Instead of the massive thorned vines encapsulating the land in the outer reaches of the region, rose bushes dot the city in a variety of colors. The symbolism is clear: O’dylitta is a rosebush. A region covered in thorns, yet crowned with a beautiful flower. It’s clear that there really isn’t much difference between Kamasylvia’s Grana and O’dylitta. Whereas Kamasylvia’s danger lies underneath the beautiful exterior, O’dylitta’s outward danger protects its beauty from the outside world.

Of all the areas Pearl Abyss has crafted over the years, this looks to be my favorite one so far. There’s a certain subtlety and nuance to this design compared to Mediah and Valencia. The team’s certainly gotten much better in terms of creating a vision with its newer areas. And while I’m not sure when this region comes out, it’s a good idea to start preparing for its release. Because despite the beauty, we all know that every rose has its thorn.