If there was ever any wonder where Bungie stands with regards to racism and hate within Destiny 2, then there have been a couple of updates to reaffirm the developers’ position.

END_OF_DOCUMENT_TOKEN_TO_BE_REPLACED

On one hand, there’s a reminder of the game’s code of conduct, which explicitly states that accounts that use hate speech against anyone based on race, religion, sexual orientation, gender identity, disability, or nationality will be removed. This removal also covers the usual gamut of poor behavior as well, including “threats to harm other members of this community, even if it was in jest.” 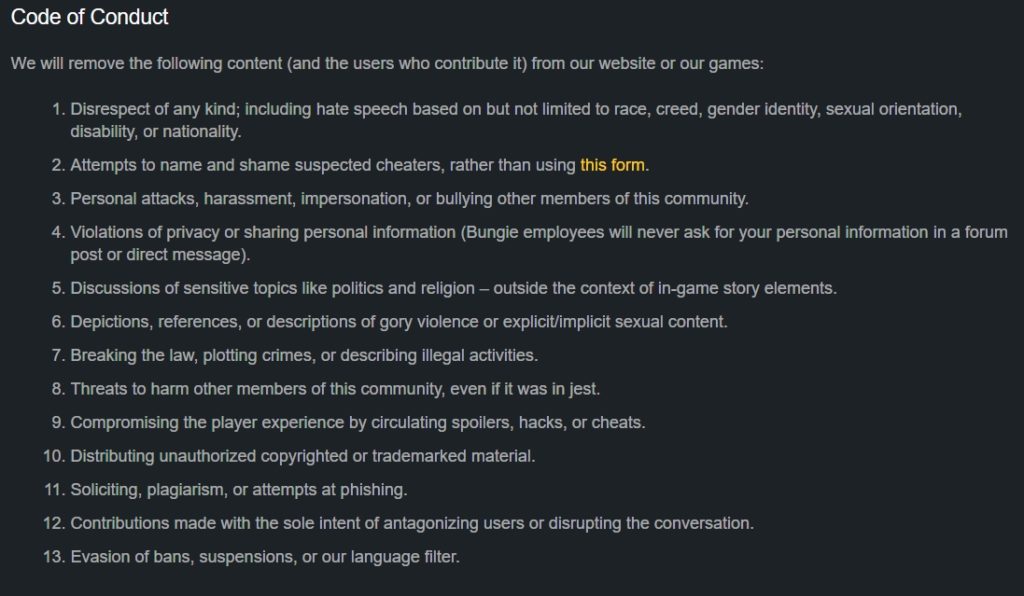 There’s also the sale of Black Lives Matter pins that will be available for pre-order on the Bungie store tomorrow. The purchase not only nets players a pin but also a similarly styled emblem for use in Destiny 2. Furthermore, all profits will be turned over to the Equal Justice Initiative.

As for the game itself, Bungie’s weekly report talks up a hotfix patch due this week as well as pre-order bonuses for the Beyond Light expansion, including an exotic Ghost shell and legendary emblem for all editions and a Freeze Tag emote for those who get the deluxe and collector’s editions.

So they’re going to remove people for, and I quote, “Discussion of sensitive topics like politics and religion – outside the context of in game story elements” but then also here’s this Black Lives Matter and Pride month pins and in game banners. Are people allowed to discuss and show support for such causes, or will doing so get them banned?

I mean it’s all theoretical anyways I guess, I’ve never had an in game conversation inside Destiny 2 in over 1000 hours playing the game.