All right, EVE Online. I’m starting to get you.

END_OF_DOCUMENT_TOKEN_TO_BE_REPLACED
The mission was to continue with the career path NPCs, and after some more time in the drudgery that was the industrial missions, I elected to push through all of the combat NPC missions, picking up with the basic military career path (which, I finally realized, was also the Cash for Capsuleers missions from back in the day) and finishing off the advanced combat missions. More than anything else, these felt the most mandatory, as they really started to put combat together in EVE for me.

I cut through the rest of the opening military career missions with little to no issue, even remembering the story beats that were trying to be told over the course of the series. Someone in last week’s comments remarked that PvE in this game is dull and I absolutely agree, especially in what I remember being some of the earliest PvE attempts that CCP Games has made. These devs do not make compelling PvE content. One could argue the studio doesn’t make compelling content as much as make compelling systems that allow the players to make their own content.

That perception, however, only slightly changed when I moved to the Advanced Military NPCs offerings. 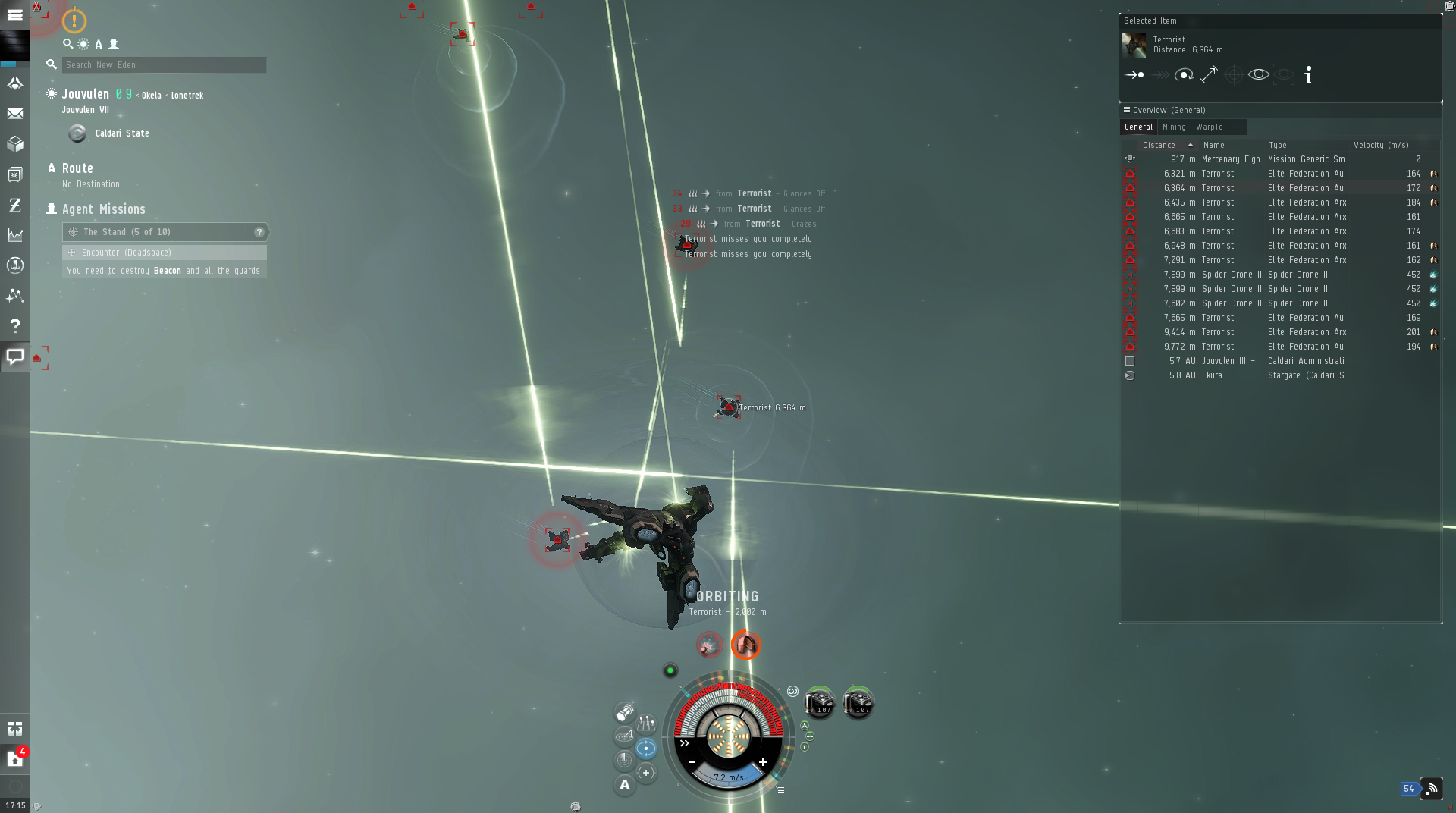 Here, more than any other missions I’ve taken up to this point, is where I felt like I was shown the most. I was given a missile launcher to appreciate where long-range assault can be important. I learned about tackling and how to use a webifier. I learned how to provide support with a little shield booster turret that I fired at a disabled ship. There’s even a mission whose sole purpose is to have you face impossible odds, get blown up, and pick yourself up again — a lesson I had already learned myself through far rougher means.

In the end I managed to pick up a couple of intriguing ships, was introduced to some more unique tools beyond simple turrets, and was opened up to the idea that there are more tactics to combat than fitting whatever is better than a civilian gun and orbiting an enemy. A couple of times I even had to pay attention to combat, alternating between moving closer to an enemy and keeping an orbit distance as the enemy ship maneuvered into my weapon falloff range.

Finally, things started to feel just the barest whiff of engaging for me. At last, I was beginning to feel confident and eager to learn. And just as I was near that point, the missions wrapped up and I got a ship that I can’t pilot yet. Given a few days, though, I will have the skills to do so. 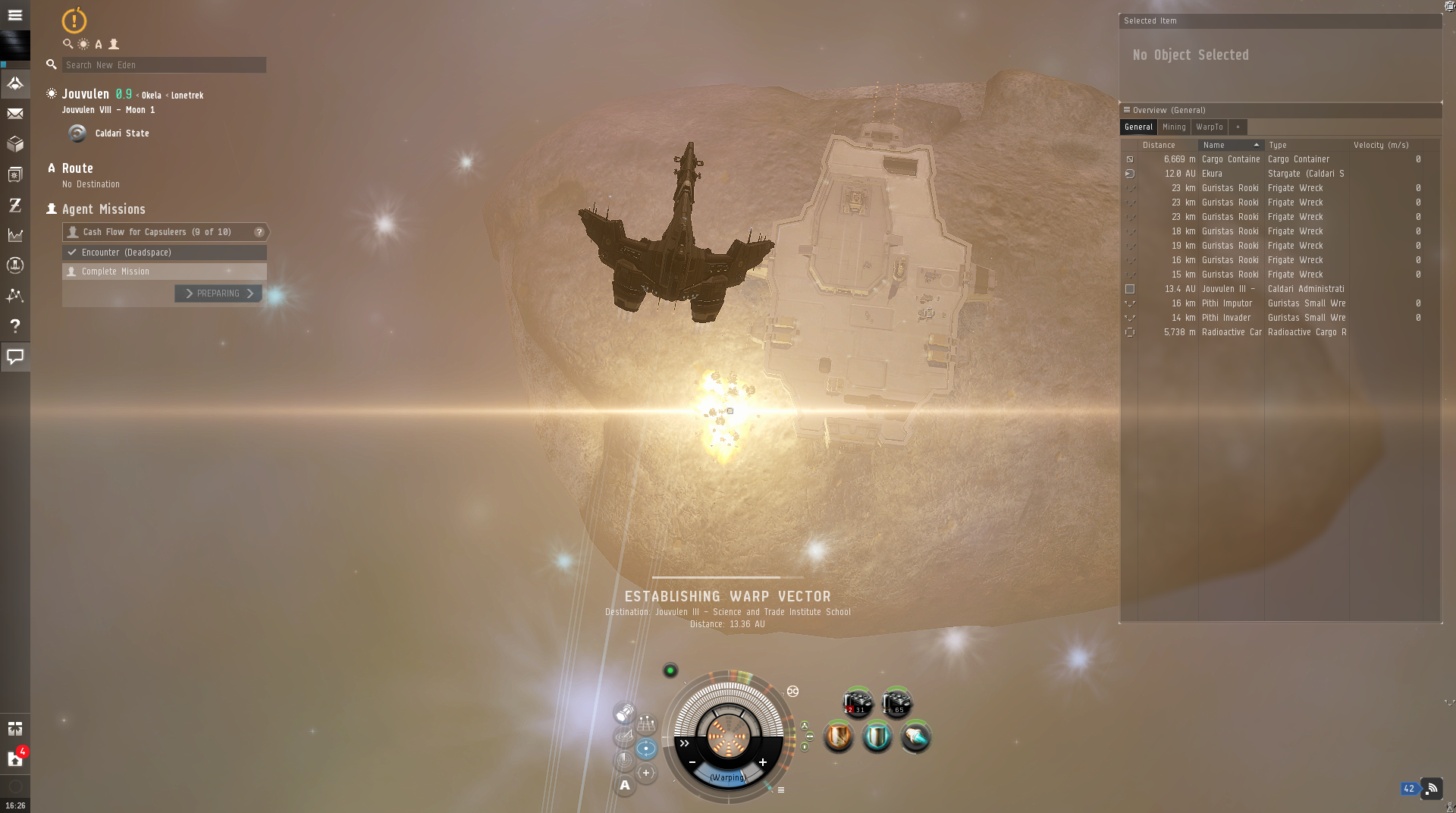 This only reaffirmed a couple of things for me: The career path NPCs absolutely need to be a part of the regular tutorial, and this game is probably not for me. This is frustrating because I always operate under the assumption that that’s my fault and not the game’s. It’s not the boring UI’s fault, or the lack of feeling directly in control. It’s not the piecemeal entry into the game. It’s not the general tedium of doing nearly everything. It’s my fault that I’m not wired right to like this, apparently.

Still, at least this time around, I was legitimately able to glean some enjoyment. I have finally gotten the barest whiffs of something that would hook me in and make me want to learn more. Basic combat is basic, but using different tools to mangle enemies or even perhaps offer up support for others? Now that is intriguing stuff. I would love to see and do more of that and be introduced to doing more of that, please.

I’ve been accused of not having anything to like in EVE Online, and up to this point you’d be right. In fact, you’re still right insofar as the negatives still outweigh the positives for me. But now? Now I have some positives I can point to and I can genuinely agree wholeheartedly with the recommendation that new arrivals to New Eden do the career path NPC missions. Especially both of the Military ones. Perhaps it will hook people far harder than it hooked me. 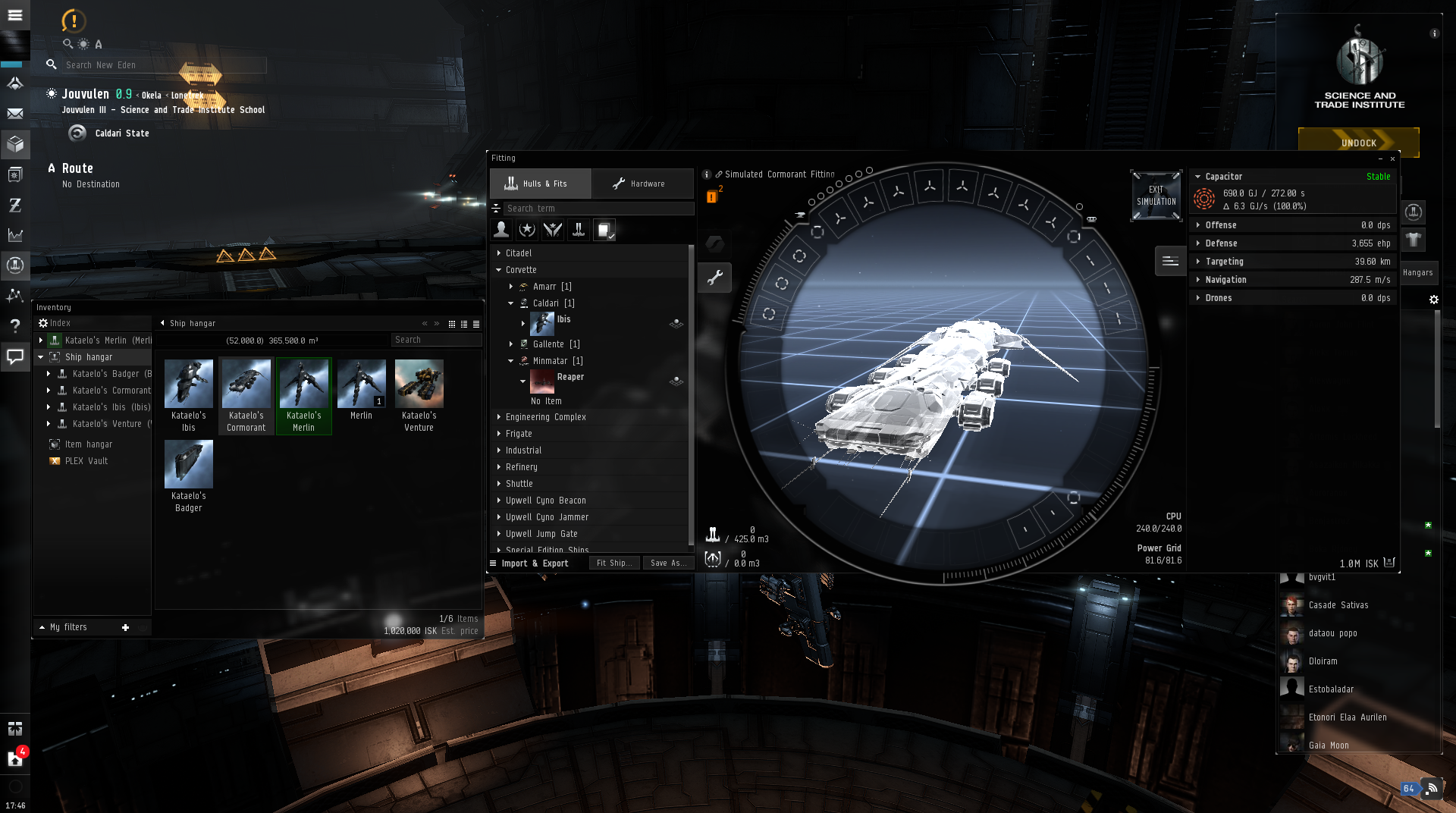 I’ll condense my feelings for next week’s write-up, and I promise I do have nice things to say about EVE Online as I sit and think about my time here, but I want some time to both get over this game and process my feelings. This means, of course, it’s time to move on to our next chosen adventure.

This time around I’m going to basically stay away from the sci-fi sandboxes for now and keep to something that will be more engaging and interesting (hopefully). Here’s the options I’m considering next:

So, where do we go from here?

What game should we try next? Choose My Adventure! 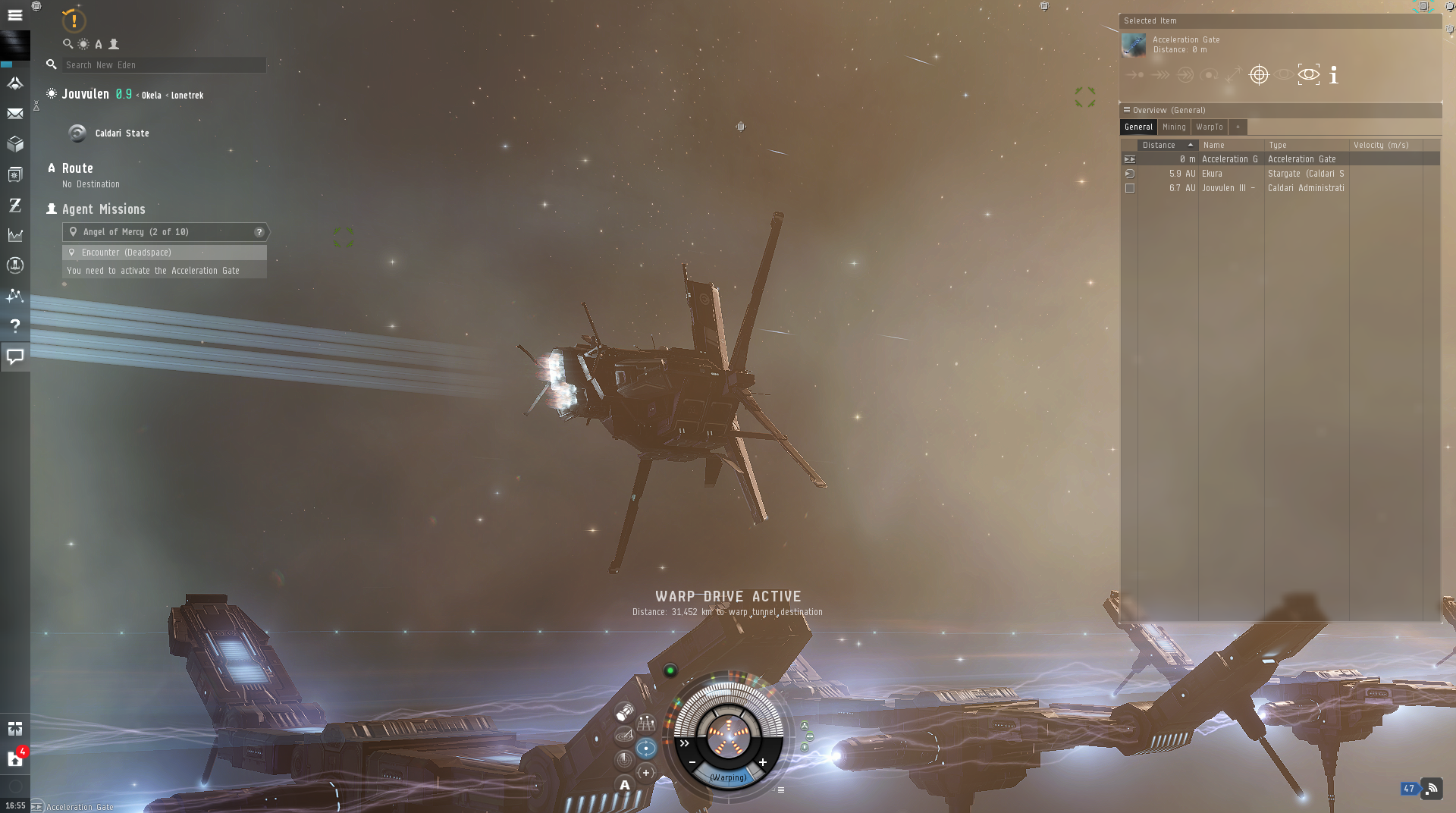 1:00 p.m. EDT, Friday, June 26th. You know the drill by now. And as grumpy as this series of playthroughs have been, I do genuinely want to thank people for their input and guidance. It wasn’t all bad for me now that I sit and think on it. Just… mostly bad for me. I’ll explain later and I hope you won’t kabob me too hard for the way I feel.

It’s my fault that I’m not wired right to like this, apparently.

It’s not you…I don’t think anybody has actual fun in the first few hours lol.

compelling systems that allow the players to make their own content.

^This is the good bit, it’s a shame you didn’t engage with any of it but such a long haul type game isn’t really suited to choose my adventure I suppose.

I chose DDO, I’ve been playing it myself recently and it’s really quite good if you can get over how old it is.

If you end up doing either DDO or LOTRO, don’t forget to grab the freebie codes! Personally, my vote is for DDO since I started that last month and have been really enjoying it.

At least you didn’t get ganked by CODE. o7

It probably would have been more exciting for all involved if he did though. :D

“Hello. We are from CODE. Would you like to buy a mining permit from us for lots of ISK and / or PLEX, so you may continue mining in peace?”

The last part of the (typical) conversation with a CODE member would have been the exciting bit, but the 12 hours of mining can be quite tranquil, in a meditative kind of way. For some EVE players anyway.

I’ve been desperate for a good sci-fi MMO for about seven years. Quit SW:TOR twice, took a break from Wildstar due to burn out, STO was run by a publisher or studio I wanted nothing to do with.

I knew EVE wasn’t for me but I had run out of options. I managed to last almost a year but eventually I reached my tolerance for the sociopaths that infest that game and walked away.

There are some things I did like. Some of the ship and structure designs are stunning. I found a couple of great groups to hang out with. I now have the context needed to understand the in-jokes of /r/EVE. Like many have observed, it’s better to read about EVE than play it.

I would have happily kept my two subs going had I been able to do my thing in peace but that’s not allowed. There are players out there that despise high sec space and go out of their way to make it as miserable as possible for those that live there.

There were other irritants that would have eventually caused me to leave regardless. Obtuse UX and gameplay isn’t complexity and it shows in the utterly braindead PvE. CCP publicly giving up on humanoform avatar play pretty much started the clock.

For now FFXIV’s magipunk setting sort of scratches that sci-fi itch. Still hoping for a solid MMO with a hard science setting before I retire.

There’s two upcoming MMO’s that fit the mold you’re looking for. Both of them are in alpha and are coming along pretty well.

The first, Dual Universe looks more like it wants to be Eve with better gameplay. It’s got a big solar system to explore; with more area’s coming, really nice industry mechanics and pvp with both ships and avatars (avatar pvp not yet included, but it’s coming). There’s also fully customizable ships, built with voxels. This ones under NDA and I can’t say everything I’d like to, but it deserves to be checked out once it heads to beta later this year.

The next is Starbase which looks like a smaller scale, but even more fully realized pvp and voxel building of ships (down to the last bolt!). Combat for this one stays first person all the time, even in ships, and looks like the more action oriented game. I’d give more impressions but the alpha is closed and I haven’t snagged a key yet, but the videos coming out look great and it’s not under as heavy NDA as Dual Universe.

Neither of these games is a killer in the graphics department like Star Citizen, but they look like actual playable games instead of an almost decade long cash-grab with ship purchases.

It’s a good time for the sci-fi MMO.

EVE was a desperation play for me and I learned my lesson there. If there’s PvP it must be completely segregated from PvE with a manual opt-in.

Dual Universe is non-optional OwPvP and from the wikipedia page has no PvE at all. The final nail is that it’s first person perspective.

Starbase sounded interesting at first until you get to the part where your avatar is a robot so pretty much a hard “no” just on that alone.

Frozenbyte’s webpage is flashy, distracting, and far too light on the details. Unfortunately there’s no Wikipedia page that scrapes off the marketing cruft so that potential players can get an idea what the game is about.

My current and possibly mistaken take is that it’s a prettier Minecraft with PvP. Even without the avatar issue that just utterly misses the mark.

And to forestall the Star Citizen cult: No. CIG’s business tactics are far too sketchy for my taste. I wouldn’t even feel safe giving them a burner debit card.

Oooh, a message from the future!