Poor Vincent, he just survived Last of Us 2 and probably choked about six hundred puppies in the process. That’s bound to mess up anyone — he says that he was “an emotional wreck” — so it makes sense to retreat into MMOs for a sense of calm and normalcy. Almost like therapy, just way cheaper.

This Final Fantasy XIV shot is absolutely gorgeous. I love it when you have one vibrant layer (the trees) with one subdued layer (the forefront character). It’s quite striking. 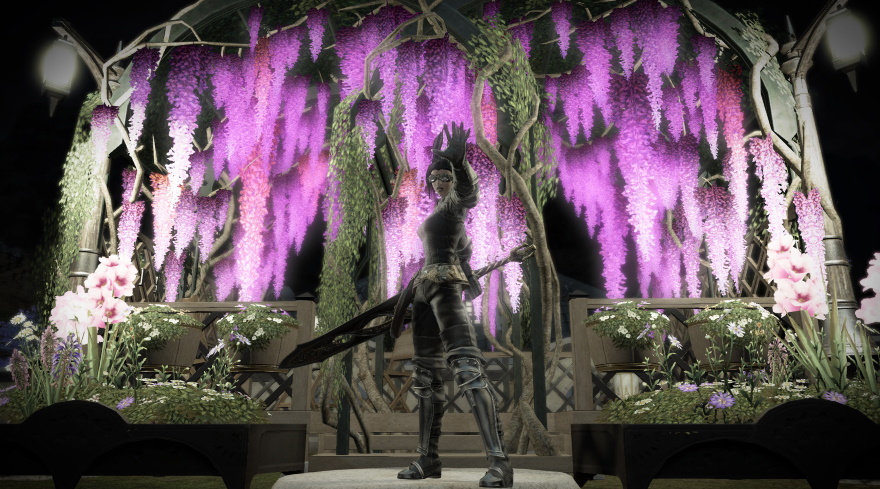 Strange things are afoot in Secret World Legends, including what looks like a player blown up to the size of a raid boss. Hikari was on the scene to show us what happens in “Mallgartha” when anniversary events descend upon the long-suffering playerbase. 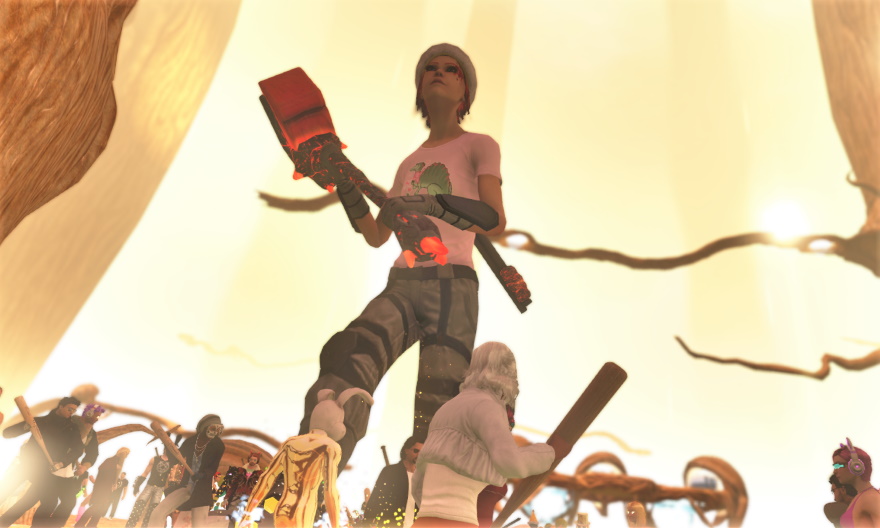 Toy Clown has another picture of player housing: “This is the salon I created for my character in Star Wars Galaxies Legends. The idea behind it is my character knows about many different species and how to work on them. I’ve attempted to reflect luxury and different species in the deco with Mon Calamari eye paintings, Twi’lek painting, and a Wookiee statue. I hope to add other alien species deco in the future.” 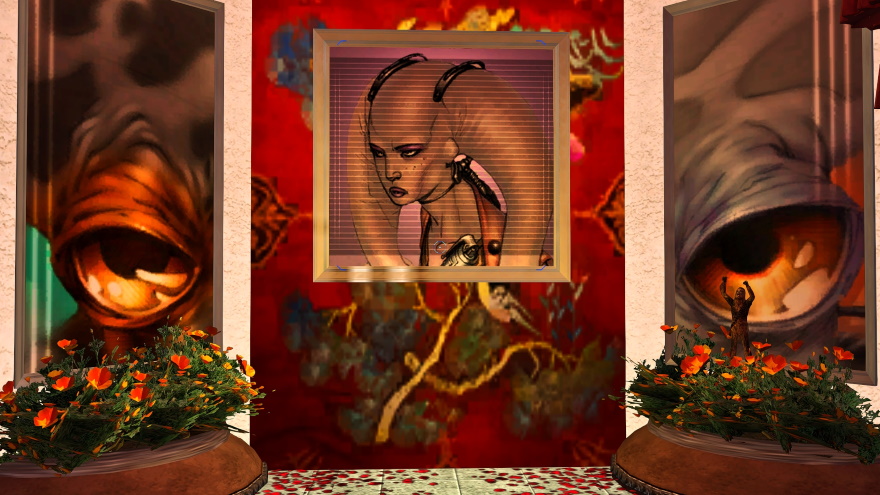 “Here’s a shot from EVE Online,” submitted Rob. “We make our own legends. This is Katia Sae, the first explorer in eve to visit every one of the over 7500 star systems in New Eden, including Wormhole space, without getting killed once.” 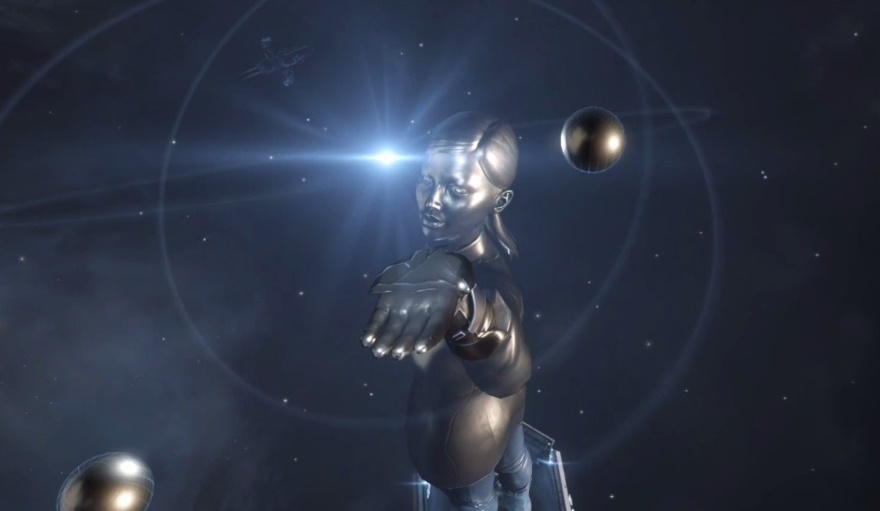 And what does it look like in Blade and Soul when everyone’s engaging in commerce? It’s apparently cute and colorful as all get out.

“In B&S, we all stand around these things that acts as our banks, mail and AH, and dance like Night Elves,” said Utakata. 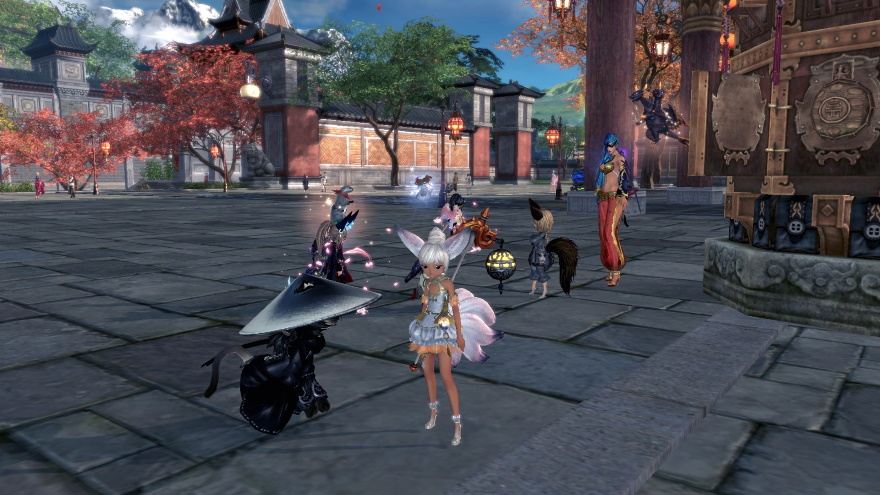 I think it’s high time to do another call for player housing pictures, so let’s see some posted in the comments for this week’s screenshot challenge!

We’ve got a few homes in Star Citizen

Everus Harbor has become our normal port of call where we station our ships for missions. I love the design of the main mall and it’s convenient to Hurston.

My apartment on New Babbage does have a lovely view however and the city is just amazing. Might end up being a more permanent stay here.

But I have to say, the Carrack has really felt like our home in Star Citizen. It was a long time coming, but the first time I stepped on board, it really felt like the home it was meant to be as it roams the Verse.

“…high time to do another call for player housing pictures…”

Still very much enjoying PSO2, especially since the client has stabilised considerably. I’ve not messed about too much with the player housing (shared amongst all characters), but my rudimentary attempt at decor is acceptable for the time being. I’ve honestly entirely too many furnishings to place, including the balcony space with most of my flora.

“My Father, Neltharion the Earth-Warder, was once tasked in protecting Azeroth before the Old Gods corrupted him and turned him into The Worldbreaker. Now for some unfortuitous reason, his head now hangs on some person’s living room wall in a distance realm of Phantasy Star Online 2. Fitting, I suppose.” – Wrathion

That is priceless, thank you!

Correction on that, it is Spinosaur, the Community Manager during last year’s anniversary.

I want to get into LOTRO housing, i just don’t know if you need to buy it with coins.

I just started working on a little bar area on Tatooine last night. I don’t have a lot of really cool stuff. Still kind of poor and collecting as I see it. Also, put together a side work room in the same house.

Anyone know how to hide the UI in Galaxies?

thx. I need some festive lights, some tapestries and floor coverings next.

Not my house. But I wouldn’t mind living here though…

Very nice, reminds me of Shirogane housing area in FFXIV.

For that, here’s another shot of the property on posted abode.

I love the colors of your character. So cute!

Like my Gnomes and Goblins in WoW…all my Lyn toons are color (or colour) coded. <3

Thanks Mr. Justin again for posting another of my screenie works. /bows

In ESO, I’ve just started to get into housing and this is the start of decoration in the Sleek Creek Estate, my favorite! I saw where to buy vines and went crazy with them, so they’re the foundation of deco here. I’m not further along yet, sorry! But have a glorious view from the deck as well. How I wished I had a house like this in the real world!

The best part about the house is that the backdoor faces the Thieves Guild hide-out. It’s great for carrying delicate loot back for quick fencing!

After touring all the big-ticket houses in ESO, the one I want the most is the Lakemire Xanmeer. Everything about it makes me feel tranquil – the colors, the sounds, the music. Plus you get a whole lake as a fish tank.

Alas, I wasn’t playing ESO when it was available for purchase – I had to take a half year off for a family medical crisis. I hope it comes back again.

Despite having several houses in various MMOs, I don’t have many screenies so I went back to Garden Warfare 2 for a couple shots of the plant side at Dave’s house.

To be fair there are several spots where you can place decorations you unlock to customize your backyard. The suit of armor, gemmed bathtub, golden rose statue, and of course that unmeltable ice cream machine are all placed by me!

The Daily Grind: Has the Crucible pull-back affected your thoughts on...